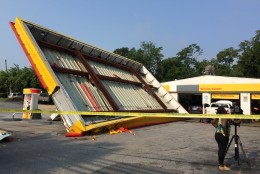 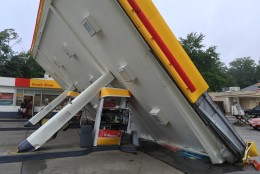 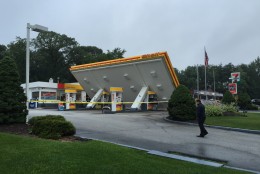 WASHINGTON — A Shell station in Bowie, Maryland, isn’t able to sell gas Wednesday after the rain and wind from the storm brought down the canopy that was covering the gas pumps.

The manager at the station on Laurel Bowie Road, who identified himself only as Mike, says that at about 1:30 a.m., “the rain was coming sideways,” with “extensive lightning strikes all around.” He says he happened to be looking at the 20-foot by 20-foot canopy, and noticed “an unusual amount of water coming from an area I normally didn’t see water coming from.”

Then, he says, it started to teeter.

“I didn’t know which way it was going to fall,” he says, and went to take cover.

Fortunately, it fell in the other direction, in the parking lot.

“I can’t honestly tell you I heard a loud crash. It just kind of mixed with the storm.”

There were no customers at the time; no one was hurt. The fire department was called to investigate. The manager says he doesn’t know when the gas will flow again, but the rest of the station is open.