He was just a sophomore on the defensive scout team, trying to simulate the upcoming opponent and help his teammates prepare for their next game. Even then, Daunte Lord just had a knack for being in the center of the action.

“He was a little unorthodox and gangly-looking, but he was always in the way,” West Springfield coach Anthony Parker said. “He made so many plays that we had to make him a starter.”

Now a 6-foot, 180-pound senior and in his third season as a starter, Lord keeps finding himself in the middle of the action on offense (at wide receiver and running back), at defensive back and on special teams.

In the Spartans’ season opener this past Friday, Lord rushed 11 times for 90 yards and two touchdowns, caught an 18-yard touchdown pass, returned a kickoff 99 yards for a touchdown and on defense made 10 tackles and intercepted two passes as West Springfield beat Mount Vernon, 49-24.

Lord’s first score came on a 99-yard kickoff return. He had touchdown runs of 67 and 24 yards (a third touchdown run was called back because of a penalty), and he caught an 18-yard touchdown pass. Parker said Lord had shown well in two preseason scrimmages, displaying elusive running ability, but Friday’s performance still was an eye-opener.

“We saw the potential,” Parker said. “Going into the game, we didn’t know if we were going to have to run more or throw more. But we wanted to get him the ball as many times as we could.”

Friendship Collegiate edge rusher Dylan Stewart, a junior who holds several top scholarship offers, made nine tackles, had four sacks, forced one fumble and recovered another as the Knights opened their season with a 22-6 win over Bishop McNamara.

Stone Bridge kicker Dylan Dastejerdi made both of his point-after kicks and booted a 35-yard field goal with 1 second left to lift the two-time defending state champion Bulldogs to a 17-16 win over Madison for their 25th consecutive victory.

Patriot quarterback Sam Fernandez completed 11 of 16 passes for 231 yards and four touchdowns, and rushed five times for a team-high 55 yards as the Pioneers opened their season with a 51-6 win over Hylton.

Gonzaga quarterback Aidan Conrath completed 22 of 26 passes for 313 yards and three touchdowns, and rushed for another score as the Eagles beat Archbishop Carroll, 37-14. 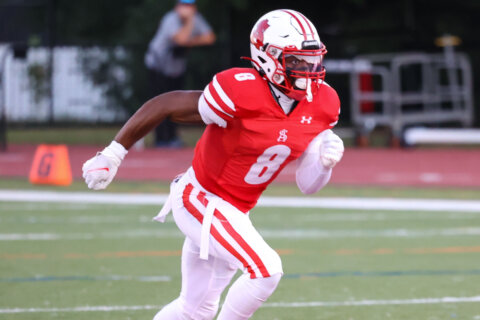 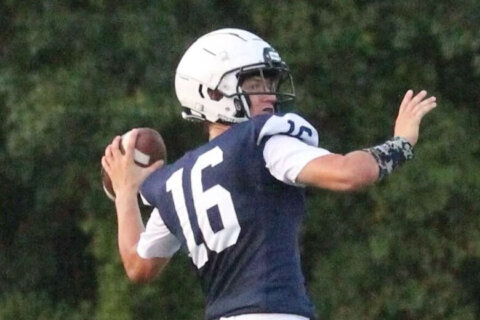 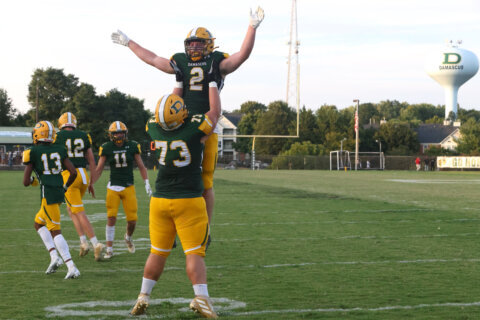