Even as its athletes win national titles, an Alexandria boxing club finds itself at a crossroads as the world outside its doors changes.
Listen now to WTOP News WTOP.com | Alexa | Google Home | WTOP App | 103.5 FM

Once a predominantly blue collar, African-American neighborhood, rising housing costs and redevelopment of old buildings into luxury apartments have transformed the Parker-Gray community in the same way as many D.C. neighborhoods.

On one corner, there’s a chic gastropub that serves roasted celeriac hummus and tasso ham BLTs alongside $13 cocktails. But remnants of the old neighborhood and its residents still exist. A couple blocks away, a hand-scrawled sign hangs in the window of a long entrenched local salon, offering men’s haircuts for just $22.

At the center of the fight between what the neighborhood is and what some aspire for it to be sits the Charles Houston Recreation Center on Wythe Street, home to the Alexandria Boxing Club.

Those belts provide the club a unique opportunity Friday night, when it will hold an open community event from 6:30-8 p.m. It’s a chance not simply to celebrate success, but to hopefully show how important the club is to their friends and neighbors.

Since the early ‘80s, the club has provided a safe haven for troubled youth and an alternative path to a life on the streets. But as those streets change, so have Alexandria’s priorities.

Joe Robert — the philanthropist who started Fight For Children, built the new gym the boxing club uses. But since it sits on city land, Alexandria still owns the facility.

The city formerly leased the building back to the club for basically nothing — just $10 per year. That changed a few years ago. The club’s recent two-year, $5,000 lease expired in September, but has been continued through Jan. 1, 2018 as the city and Fight For Children (Alexandria Boxing Club’s parent 501(c)3) work out a new one.

While $2,500 a year might not seem like much, Alexandria Boxing Club is financed entirely through Fight For Children and doesn’t operate its own budget. This isn’t some highly-structured youth sports operation with coaches pocketing huge paydays for their work.

While a couple coaches receive stipends through Fight For Children, the rest volunteer their time. All the boxers pay for is access to the facilities through registration with the community center, which is free to youth residents and just $125 per year for adult residents, with discounts of up to 70 percent for those who qualify. The club sees none of that money, and ultimately decisions about its future are made jointly by the city and Fight For Children.

The boxing club currently uses the space from 4:30-9 p.m. on weekdays and 9 a.m.-2 p.m. on Saturday, but the city is trying to make more effective use of the space. That may mean adding other, city-run programming using the club’s facility during off hours. Durham said there’s been no talk on their end of cutting into the club’s time, though.

“We, from the city perspective, haven’t proposed limiting or changing hours,” she said.

As the neighborhood around the boxing club changes, as fewer poor and underserved kids remain, it’s a fair question to ask: How much does the facility serve the actual youth in the community?

“That’s a huge component and a huge part of our mission,” Dara Shen, team manager of Alexandria Boxing Club, told WTOP. “But the reality of it is a boxing gym is a family of people from all walks of life.”

You’ll hear that word, family, perhaps more than any other from those who train at the center, anywhere from three to six hours each day. That includes not just the amateurs who took home titles last week, but also fairly well-known professional fighters.

The presence of amateur champions and successful professionals brings cachet and respect to the club, to be certain. But the city, understandably, wants its facilities to serve its own children. By bringing in those from other communities, the club serves a mission that extends beyond Alexandria and brings people into the city to pay for memberships and spend money there. But is that enough on its own for the city to dedicate funds in support of the club?

While the city continues to emphasize the importance of serving Alexandria youth, Durham is not blind to the adult boxing program’s role in helping forward that goal.

“We understand that that is part of what engages the younger kids and gets them involved in the program,” she said.

A graduate of T.C. Williams High School and Virginia Tech now living back in Alexandria, Shen was a boxer herself for almost 10 years, twice a national champion who fought in the Olympic Trials and World Championships. She is now a law student at UDC. Her combination of backgrounds informs the way she sees gentrification affecting the club and threatening its future.

“We traditionally serve an underprivileged population that is impacted in a way where they’re dwindling,” said Shen. “If you’re a gym that’s here to serve kids and keep kids off the street and those kids aren’t around anymore, it’s kind of a hard argument to the city about why we should continue to operate here under the same circumstances.”

For Shen, as a bystander to the negotiations, it’s been agonizing not knowing what the future of the club will look like, and feeling like you have little agency in shaping that future.

That’s why Friday night’s event means so much to her. It’s her best chance to show the community that a social program like the boxing club is working, by telling its success stories, especially that of Troy Isley.

Isley’s family moved into a home five blocks from the rec center when he was in fifth grade. That was about the same time he started to get into fights after school, prompting his dad to put him into the boxing club. Ten years and two straight national championships later, he’s the club’s shining star and poster child of its purpose.

Isley credits the club’s safe, supportive environment for helping him channel his energy and finding a path that challenged him and kept him off the streets.

While that description may not sound like the Old Town Alexandria tourists know, the city still has crime. There have been multiple shootings in and around the neighborhood where the rec center sits just in the past six months, including one that left two dead.

Without the boxing club, Isley could easily have been one of those teens. Instead, he’s a national champion for the second straight year, with a great shot at representing the U.S. in the 2020 Olympics. But despite his own success, Isley has found boxing a hard sell to some of his peers, some of the very people the club hopes to be a resource for.

“It’s tough. Some people are so used to that life, it’s tough to get them out,” he said.

The boxing club has started to attract others from the outside, though. It has quickly become home over the past year for the Davis Brothers, Keyshawn and Keon, whose family moved from Norfolk when their former boxing gym shuttered. Keyshawn, 18, has been boxing since he was 8 or 9, and though he also played other sports growing up, the accessibility of his old gym played a huge role in his boxing beginnings.

“The gym was right around the corner from our house, so it was perfect,” said Keyshawn, who won the national title in the 132-poind weight class.

The Davises don’t live in North Old Town, though. They commute across town, from the Fairfax County part of Alexandria. That’s the reality of a niche sport like boxing given the changing demographics around the Houston Center. But just because they can’t walk there doesn’t make it any less of the welcoming place they hoped to find when they left Norfolk.

“Even though I’ve only been here for a year, this feels like home,” said Keyshawn. “I wouldn’t leave it for nothing.”

The Davises aren’t the only ones who travel to make the center home. Amelia Moore, 27, grew up in tiny Norway, Maine, a town of fewer than 5,000 in the shadows of Mt. Washington. Raised in what she described as “very modest” conditions by a single parent, Moore understood her opportunities for a way out were limited.

“Most of the time, people don’t end up getting out of town unless you have money in the family or you go into the military,” she explained.

Her guidance counselor urged her to apply to the military academies, and she enrolled at the Naval Academy in Annapolis for two years. Ultimately, though, she found her way to boxing, under the tutelage of Thomas Langley Sr. When he passed away during Moore’s Olympic qualifying in 2015, she found a new boxing home in Alexandria, though she still commutes from Greenbelt, Maryland.

“It’s not just for the kids, it’s for the adults, too,” she told WTOP. “We have people from all walks of life. You can have money, you can have no money. You could have family, you could have no family. But you’re family here.”

After a runner-up finish in the national championships last year, Moore broke through to win every major tournament she set her eyes on this year, including becoming the club’s third national champion. And while she has her eyes set on the World Championships, she realizes that there’s more to what boxing has done for her than simply afford the chance to win titles and recognition.

“You never know that there’s things that are holding you back within yourself, but boxing helps you face those,” she said. “It’s not a tough man’s sport. It’s about conquering fear. And the first place you do that to become a champion is in your own mind.”

For Moore, the confidence to do that started with her old coach and continues with her coaches and fellow boxers in Alexandria.

“These are people who believe in you. And you spend so much quality time with them, and it helps you believe in yourself,” she said.

Now it’s up to the club to show their family to the community and to try to get them to embrace it. Alexandria Mayor Allison Silberberg is expected at Friday’s event. Shen hopes that helps spread the word, drawing other community members to see what the club is all about.

“For me, it’s not as simple as just writing a check. Money never hurts, but for me it’s more about community awareness,” Shen said.

It should come as no surprise that the members of the Alexandria Boxing Club aren’t looking for a handout — they’re just looking for a better way forward. 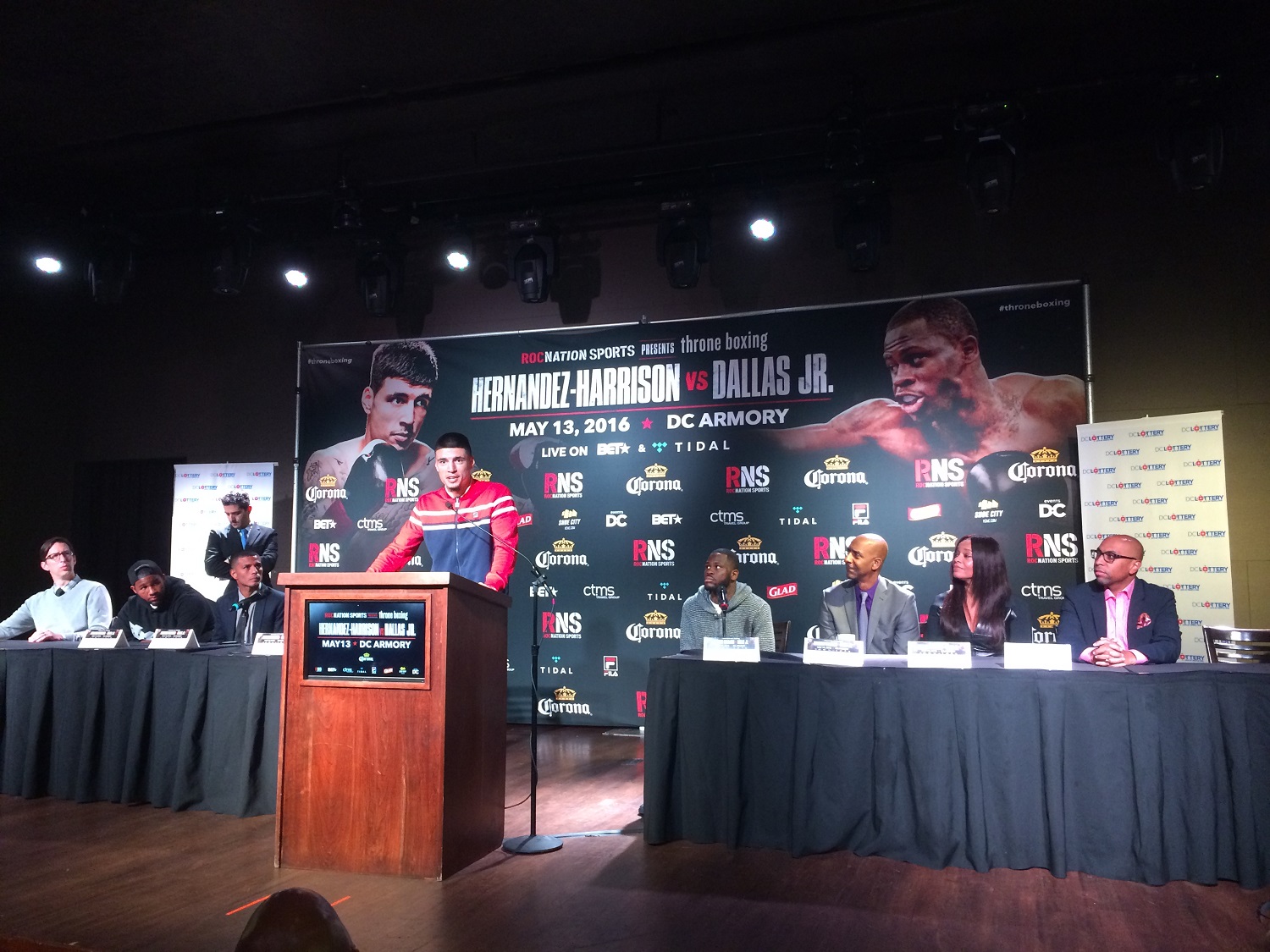 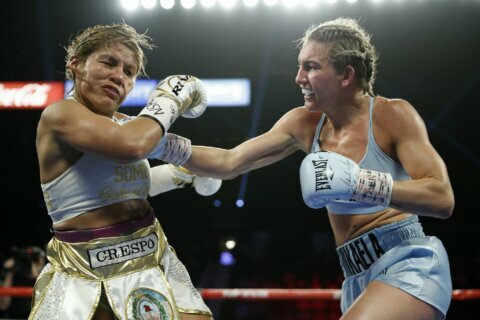