COLUMBIA, Md. — If you took a look at the Merriweather Post Pavilion crowd Monday night without knowing the acts, you would have guessed for a while before landing on headliner Gorillaz, and a good while longer before getting to the openers Vince Staples or Danny Brown.

There was a healthy mix of young and old; young punks with mohawks, middle-aged guys with cowboy hats, T-shirt and cargo-shorted dads with their teenagers. There were shirts from musical acts ranging from pop punkers Brand New, classic hip-hoppers Wu-Tang Clan, and the metal band Deftones.

This widespread array of shared musical interests explains how, after releasing its first album in seven years, Gorillaz was able to pack the house on a muggy Monday night and deliver a show that kept the crowd standing for nearly the entire hour-plus long set, plus a four-song encore.

That mix of musical influences may have also helped explain the response to the opening acts. Despite his ubiquitous summer festival reputation, Staples’ more contemplative style didn’t seem to connect as much leading off the night. When he implored the crowd to sing along after him on “Yeah Right,” nobody on the lawn seemed to notice, much less care.

Brown, on the other hand, came out loud and strong, his trademark high energy striking more of a chord with the crowd. His bottom-of-your-throat-buzzing EDM beats were born out of the generation that followed acts like the Gorillaz, after all, so it’s not a surprise his style may have resonated more with those there to see the main act.

Both appeared at times with the headlining act — already a 13-person ensemble, if you include the six-member back-up choir. Staples shined there, as did Pusha T and a half dozen other featured singers, some appearing in person, some recorded and brought to life through the intricate, lighted backdrop display.

The core members of Gorillaz wore all black, allowing their trademark animated visuals to take precedence behind them. And while one might think this gimmick had run its course by now, lead singer Damon Albarn still brings it at age 49, a polished showman and musician thoroughly in his element.

Somehow wearing a track jacket and jeans in spite of the heat, Albarn showcased his musical range on several instruments and showed off his four distinct voices — as a speaker, a singer in his normal baritone, his piercing falsetto, and the now-familiar hollow distortion provided by a microphone attached to what appeared to be an old CB radio transmitter.

While Albarn and company kept the crowd engaged throughout the ebbs and flows of the playlist, their enthusiasm only amplified the background animation. The characters on screen sometimes sang along, more or less perfectly in rhythm. It had the feeling of a well-rehearsed chaos, bodies in lockstep after nearly 20 years of gigs together.

The band’s longevity accounted for the mixed crowd, one that had its phones out recording far less than at many other shows. The only time they really emerged in mass was at the behest of Albarn, who called on the crowd to shine their phone lights for a ballad, as a prior generation might have with their Zippos.

“You can put your lights on, if you want,” he called out. “It’s kind of beautiful.”

By the end of the night, Gorillaz had played all of their hits, minus one notable exception. The encore itself seemed to be a setup to close with “Feel Good Inc.” with hits “Kids With Guns” and “Clint Eastwood” (including Staples guesting on the second verse) building the frenzy, the repeated line over and over, “The future is coming on…” trailing off in anticipation.

But they finished instead with “Don’t Get Lost In Heaven,” a percussionless, almost Beatles-esque repeater that leads into “Demon Days,” the final song on the album of the same name. It wasn’t the easy, expected finish to the night, but it showed that, even without their biggest hit, Gorillaz has both the cache and the skill to still pull off an entertaining, satisfying show. 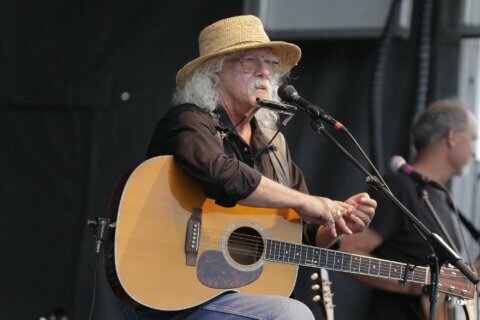