The pilot of the plane that struck a power transmission tower calmly tells 911 what happened, but worried that the plane would not stay in place.
Listen now to WTOP News WTOP.com | Alexa | Google Home | WTOP App | 103.5 FM
(1/5) 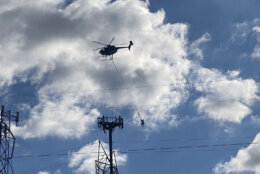 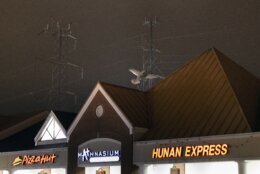 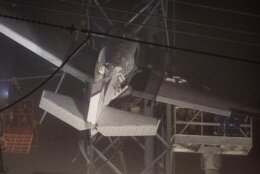 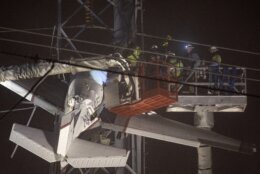 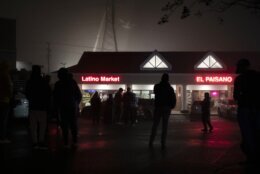 One person, who was injured after a small plane crashed into a power transmission tower in Montgomery Village, Maryland, Sunday evening and then dangled in the wires for several hours, has been released from the hospital.

One person remains hospitalized after the crash, which knocked out power for more than 85,000 customers Sunday night.

Montgomery County Fire Chief Scott Goldstein said he could not say who, among the two, was still hospitalized.

The cause of the crash is still unknown.

The small plane, a Mooney M20P single-engine plane, crashed into the power transmission tower about 5:30 p.m. Sunday, becoming “embedded” into the tower, Goldstein said, and tangled up in power lines about 100 feet in the air.

Montgomery County Fire spokesman Pete Piringer told reporters it was the pilot who made the first 911 call from a cellphone while the plane was suspended in the air.

Officials said 911 call-takers remained in “constant contact” with the occupants over the entirety of the nearly eight-hour ordeal, calling the occupants every 30 minutes for a check-in in an effort to preserve their cellphone batteries.

Piringer described the occupants as being “banged up” but OK enough to communicate with first responders.

Crews first had to de-energize power lines and ground any residual electricity. Donna Cooper, regional president of Pepco, the power company, said it appeared the plane’s propellers came into contact with the wires but that the plane quickly lodged into the tower.

Shortly after midnight, both occupants were safely taken out of the plane using cranes.

Officials acknowledged the rescue was a “very deliberate and time-consuming” process and was nerve-wracking to the occupants.

“They were anxious. They were concerned about the stability of the aircraft,” Goldstein said. “They were disoriented to the severity of, or the complexity of the circumstances.”

In the 911 call, the occupants expressed concern about the wind picking up and causing movement to the plane. The dispatcher communicated the rescuers’ advice for the two occupants to stay in the aircraft, as crews assessed how to get them out, including using a ladder.

“Please hurry,” one of the occupants could be heard saying.

“They’re moving as fast as they can; they’re going to get up to you guys,” the 911 call-taker said.

The pilot told the dispatcher that it was a visibility issue.

“We were looking for the airport. I descended to the minimum altitude … and apparently I got down a little bit lower than I should have,” the pilot said.

By 3 a.m., about two hours after the occupants were rescued, the plane was extricated from the tower and brought safely to the ground.

Capt. Prendi Garcia, with the Maryland State Police, said the plane will remain at the site until it is inspected by National Transportation Safety Board investigators.

State police, along with the Federal Aviation Administration and the NTSB, are all investigating the crash.

And in a statement Monday evening, the NTSB said it will have a preliminary report on the crash released in two to three weeks. A final report will take longer — up to two years.

“The investigation will look at factors within three investigative areas: The pilot, the aircraft and the environment,” the statement read.

“This will include steps such as interviewing the pilot and the passenger as soon as they have recovered and are in a stable condition; looking at the aircraft’s maintenance records and history; and gathering reports of the weather and air traffic surrounding Montgomery Airpark (GAI) at the time of the accident.”

The FAA reported that the plane departed from Westchester County Airport in White Plains, New York, on its way to Montgomery County Airpark in Gaithersburg.

Cooper, the Pepco official, said power was restored to all customers by 11:58 p.m.

Montgomery County closed schools Monday, saying it needed the day to make sure all systems were running smoothly after the outage.

“This is not in anybody’s manual,” he said, adding later, “I’m just happy this hasn’t been a tragedy.”