For anyone interested in getting rid of an unwanted firearm voluntarily, anonymously and safely, Rockville is holding a gun buyback event later this month.
Listen now to WTOP News WTOP.com | Alexa | Google Home | WTOP App | 103.5 FM
(1/3) 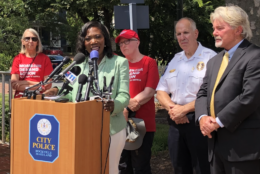 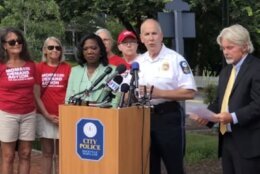 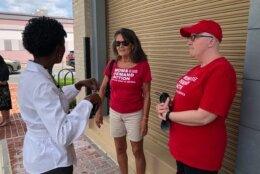 For anyone interested in getting rid of an unwanted firearm voluntarily, anonymously and safely, Rockville, Maryland, is holding a gun buyback event later this month.

It’s on Saturday, Aug. 27, and there will be no questions asked and no ID required of anyone bringing a gun between 10 a.m. and 2 p.m. at the Rockville City Police headquarters at 2 W. Montgomery Ave.

The event is open to anyone, and while supplies last, people can get a $100 Visa gift card for functioning handguns, rifles and shotguns; $200 gift cards for functioning assault-style weapons and privately manufactured firearms (ghost guns).

Weapons that do not work and ammunition can be dropped off, as well.

“Keeping guns off our community streets and out of the hands of our youth is our highest priority,” Rockville City Police Chief Victor Brito said during the event’s announcement on Wednesday.

“It’s very important for us that every gun turned in is one less gun that can be used in a serious crime, a suicide, domestic violence incident or accidentally discharged by a child,” Brito said.

The advocacy group Maryland Moms Demand Action believes that with the way gun violence is increasing in America, it’s only a matter of time until everyone will be affected in some way or the other.

“We are thrilled anytime we can get guns out of circulation that might fall into the hands of children,” said Melissa Ladd, the chapter leader for Maryland Moms Demand Action.

People turning in their weapons on Aug. 27 should stay in their cars with unloaded guns and ammunition in the trunk.

Anyone with additional questions can contact Rockville City Police at publicsafety@rockvillemd.gov.