Lawmakers in Montgomery County have approved new “phased” COVID-19 regulations that loosen some restrictions immediately, but keep current capacity limits at restaurants in place for the next two weeks.

The new rules come after Maryland Gov. Larry Hogan announced earlier this week that all statewide capacity limits on restaurants, retailers, religious facilities and other establishments  would be lifted entirely starting Friday at 5 p.m.

Officials in Montgomery County, Maryland’s most populous county, said they were blindsided by the move, which sent them scrambling to rewrite their rules in a few days.

Friday’s vote to approve the new rules by the nine-member Montgomery County Council was unanimous, although some council members expressed misgivings about some of the provisions within the hastily written regulations that came in the wake of Hogan’s surprise announcement.

At a news briefing following the council’s vote, Montgomery County Marc Elrich called the governor’s order “unfortunate,” adding, “every time we open the door and every time we increase capacity, we increase risk.”

Regarding the county’s more restrictive approach compared to the state, Elrich said: “We are not going to open up and create greater danger for the residents of Montgomery County. We all understand that our decisions really are life and death.”

As it stands now, restaurants are required to keep indoor dining limited to 25% of their maximum capacity. Retailers, fitness centers, hair and nail salons can also now operate at 25% capacity. Religious facilities can increase capacity to 50%. 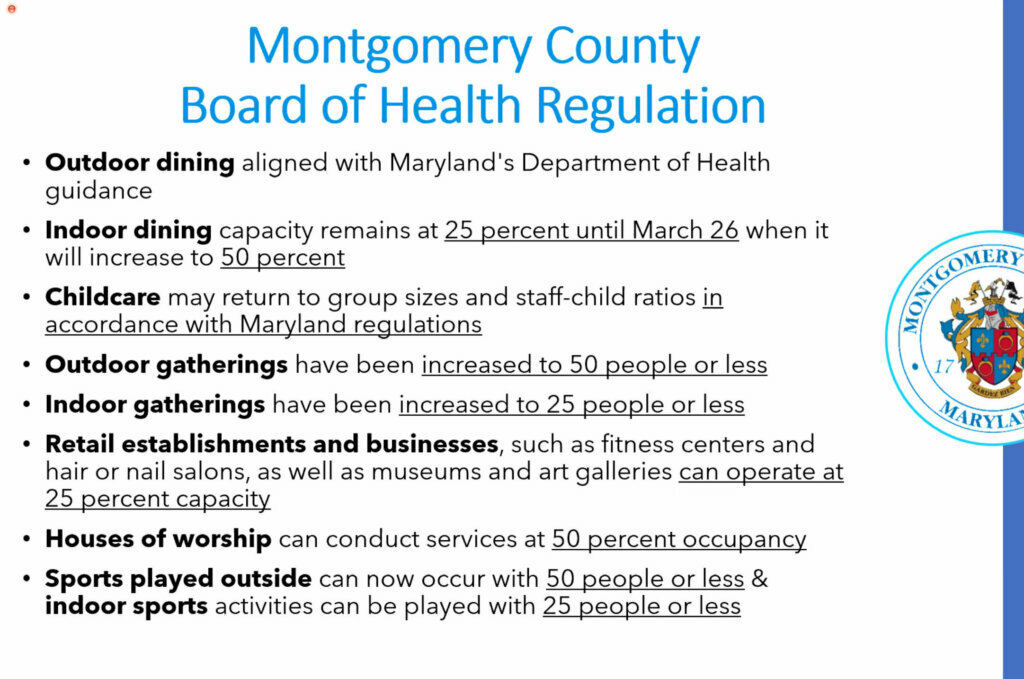 Indoor dining at restaurants, for example, is set to expand to 50% capacity. At fitness centers, salons and other establishments, capacity limits will also expand to 50%. In addition, movie theaters and other arts and entertainment venues can reopen for the first time — at 25% capacity.

Among the other changes the council approved include:

Much of the discussion Friday before the council voted revolved around indoor and outdoor  sporting events.

Under the new rules, they are limited to the 10-person and 50-person gathering limits, but the council approved an amendment allowing the organizers of youth sports to seek a letter of approval from the county to hold youth sports events that exceed the approved limits.

A separate amendment, more narrowly approved by the council on a 5-4 vote, expanded capacity limits specifically for youth hockey games at ice rinks. Under the current regulations, hockey rinks are treated as fitness centers, which have currently have a 25% capacity. However, separate rules limit indoor sports to 25 people total. The amendment expands capacity limits to 10% of an ice rink’s total capacity.

In general, Montgomery County has been slower than the state when it comes to lifting coronavirus-related restrictions. The county only restarted indoor dining with 25% capacity limit last month — becoming the last jurisdiction in the D.C. area to do so following a holiday surge in cases that spurred tighter restrictions across the region.

The governor’s new statewide order keeps in place a requirement that people wear masks in public places and to maintain social distancing rules even at restaurants that reopen at full capacity.

“I’d like to see us stay at the limits we’re at,” Jawando said, but added that the county’s newly written regulations are “much more responsible and much more thought through than what the governor has done.”

Since a post-holiday surge, Montgomery County has seen improving case numbers in recent weeks. The seven-day average of new coronavirus cases per 100,000 residents is now less than 10, which signifies a moderate risk of transmission, but is down significantly from a peak in January of more than 47.

The test positivity rate — the percentage of tests coming back positive — is 2.8%, which indicates a very low risk of transmission.

“It is clear that our county residents have definitely followed the very important guidelines of social distancing of making sure to wear masks, respecting the restrictions that we have put in place and that is why we are able to be at the point that we are today,” said Council Member Nancy Navarro.

But she added, nodding to the recent improving case numbers: “There is no doubt that this is all very tenuous … We don’t want to go backwards.”

Health officials said they remain concerned about the potential spread of three kinds of coronavirus strains that are more transmissible. The strains — first identified in the U.K., South Africa and Brazil — have all been identified in Maryland.

In addition, officials pointed to statements by Dr. Anthony Fauci and other health experts in the administration of President Joe Biden suggesting now is not the time to lift restrictions.

“Now is the time to keep our foot on the accelerator with regard to adherence to public health measures, such as masking, physical distancing, and other measures that we know work to protect people,” Fauci said in a video message to the County Council just hours before Hogan made his announcement.

In neighboring Prince George’s County, Executive Angela Alsobrooks announced the county wouldn’t follow the governor in lifting capacity limits entirely, but would instead impose a 50% cap on restaurants, movie theaters and other establishments.

Anne Arundel and Howard counties said they would generally align with the governor’s order.

1 dead in crash on US 29 in Silver Spring