Montgomery County, Maryland, council members are calling for an immediate fix and an outside investigation into problems related to hazard pay uncovered in a recent Inspector General’s report.

The report from Megan Davey Limarzi revealed that there were improper claims of hazard pay within the county’s Department of Permitting Services. As a result of the findings, the county is seeking repayment for an estimated $100,000 in improper hazard pay payments.

Under an agreement with county labor unions, hazard pay had been granted for employees who had to be in contact with the public as part of their jobs. According to the IG report, about half of the inspectors within the Department of Permitting Services claimed 80 hours of “front-facing time” during each pay period. That included hours spent working from home or working without any contact with the public.

During a council session Tuesday, Council member Andrew Friedson called the overpayments an “egregious breach of trust” and said that if the public is expected to trust local government, then action — including an outside investigation and repayment of the funds — must be taken immediately, “no excuses, no delays.”

“Every single taxpayer dollar that was wrongfully paid out must be returned immediately. That is not negotiable” Friedson said.

According to the report, Limarzi said the former Acting Director of DPS and four division chiefs allowed the hazard payments rather than declare them ineligible. She said one division chief referred to determining which hours could be eligible for hazard pay and which couldn’t as “nitpicking.”

Richard Madaleno, the county’s chief administrative officer, said he first learned of the overpayments when the Inspector General’s report was submitted Oct. 29.

Friedson asked if Madaleno agreed with the Inspector General’s finding that there had been a “deliberate misapplication of the pay differential.”

“We have not been able to find evidence of malicious intent in this,” Madaleno replied.

During Tuesday’s meeting, Fariba Kassiri, the deputy chief administrative officer, said there had been an “egregious mistake” but not a deliberate act by the former acting director of DPS, who’s now retired.

Madaleno made a point of saying that the former acting director’s retirement was not related to the investigation, explaining that Hadi Mansouri took his retirement as previously planned.

But Council President Sidney Katz said there should be an independent investigation so the county could be sure that all the issues in the IG report “are properly addressed.”

Council member Will Jawando said it was important to account for all the funds and gave a nod to the work that the county’s front-line employees have done throughout the pandemic.

“I want to thank all of our front-line employees,” he said. And referring to the overpayments, Jawando said, “I think this is something that can be corrected, and I really appreciate all the work they’re doing on the front line.”

County Executive Marc Elrich released a statement saying, “We don’t have any reason to suspect fraud, but if any fraud is identified, we will address it immediately.”

Elrich also said, “I want to be clear — as soon as the current DPS director learned of this practice she stopped it.”

Current DPS Director Mitra Pedoeem pledged that the issue would be corrected.

“Every single hour, every single minute” of pay will be accounted for. “I can promise you that,” she said.

The IG report also said that other county departments “may also be misapplying the COVID differential pay policy.”

Asked about whether her office is investigating other departments, Limarzi told council members she could “neither confirm nor deny” any ongoing investigations. 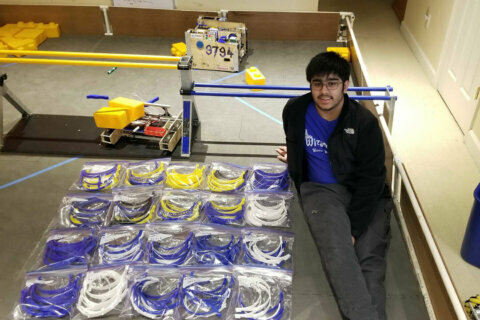 WTOP Top Kid: How a Rockville teen went from robotics to making PPE for COVID workers