A man and woman have been arrested for setting small fires outside a Montgomery County church. The man had also recently been charged with a hate crime for defacing a local synagogue.
Listen now to WTOP News WTOP.com | Alexa | Google Home | WTOP App | 103.5 FM

A man arrested for throwing lit Molotov cocktails at a Wheaton, Maryland, church allegedly told his girlfriend he was the anti-Christ and that he had plans to vandalize 13 local houses of worship, according to charging documents.

He and Rebecca Matathias, 23, of Brookville, Maryland, were arrested on second-degree arson charges and other counts in connection with the small fires set April 8 at St. Catherine Laboure Roman Catholic Church, in the 11800 block of Claridge Road in Wheaton.

According to charging documents obtained by WTOP, Matathias told investigators she and Costas were dating.

“She described Costas as satanic, and that he labels himself as the anti-Christ,” wrote Capt. Erin Wirth, of the Montgomery County Fire Marshal’s Office.

“He told her he wanted to vandalize three synagogues and 10 churches,” Wirth wrote, describing what Costas allegedly told Matathias.

As the couple drove around Montgomery County in Costas’ Chevrolet Tahoe, bearing Georgia plates, he told Matathias he wanted to torch a church. They stopped at a Rockville gas station and filled a large, red plastic can with gasoline.

According to investigators, Costas and Matathias drove to the religious school adjacent to the church, and filled two Mason jars and a soda bottle with gasoline from the can. Lids with holes in them were screwed onto the Mason jars.

Matathias then stuffed crumpled newspaper into the jars and bottle until it reached the gasoline, while leaving the newspaper sticking out of the top. She lit the soda bottle, and threw it against the wall of the church.

According to Wirth, the woman lit both Mason jar devices and handed them to Costas, who threw them at the wall of the building.

The couple also filled a Foster’s beer can with gasoline, stuffed in newspaper, lit it and threw it down a staircase toward the church.

“Matathias advised the fire was so big it blew the door open at the bottom of the stairs,” and that was corroborated by a Ring security camera mounted nearby.

Montgomery County Fire and Rescue responded to an automatic alarm at the church last Wednesday evening and found several small fires. A photo provided by spokesperson Pete Piringer showed charring on a metal door, leading into the brick church.

The previous Friday, Costas had been arrested for the March 28 defacing of Tikvat Israel Congregation, located in the 2200 block of Baltimore Road in Rockville.

Costas was charged with the hate crime of damaging property because of a person’s religious beliefs, as well as defacing a religious facility and malicious destruction.

In the synagogue incident, Costas was arrested after police released surveillance video of a man parking his car outside the building, walking up and spraying paint on the outside wall. Police said the man painted swastikas and hateful slogans.

Matathias was released on bond. Costas is being held in custody. 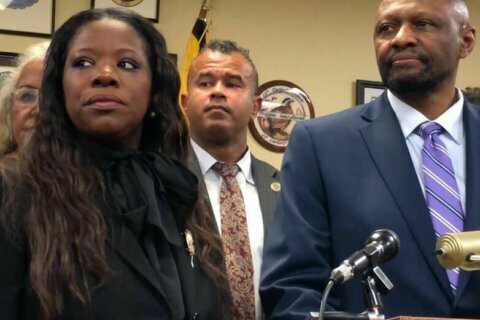