The discovery of a swastika spray painted on a Rockville, Maryland, school over the weekend was outlined in a letter Monday night to the Richard Montgomery High School community.

WASHINGTON — The discovery of a swastika spray painted on a Rockville, Maryland, high school over the weekend was outlined in a letter Monday night to the school’s community.

Richard Montgomery High School principal intern Kiera Butler wrote in the letter that a swastika was drawn in bright orange spray paint on the side of the school facing the stadium. The graffiti likely painted between Friday night and Saturday morning, Butler said.

“The security staff at Richard Montgomery High School, along with Rockville City Police, responded and surveyed the area. The swastika has been removed, and there is an ongoing investigation into the defacement of school property,” she said.

Butler also mentioned another incident last month, where red cups decorating fencing outside of the school stadium that was supposed to spell out “seniors” and other words were rearranged to spell out a racial slur instead. She called both of the incidents “demeaning and not representative” of the school community.

“Whether perpetrated by a student in our building or a person in the community, we need to stand united to send the message that we are a school that embraces our diversity and will not allow the infiltration of hatred,” Butler said.

Butler added that she planned to address students Tuesday morning about the incident. 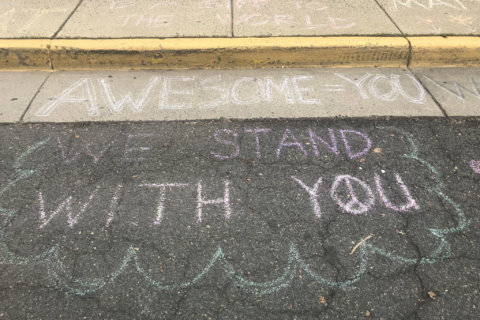