About 100 Silver Spring residents took to the streets Sunday for a safety walk with the aim of making the 1-mile stretch of Dale Drive between Colesville Road and Georgia Avenue a little bit safer for neighborhood residents.
(1/5) 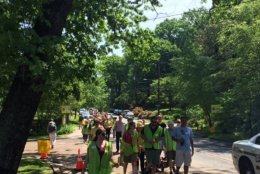 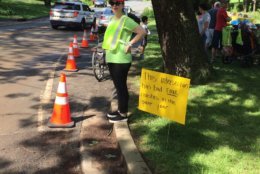 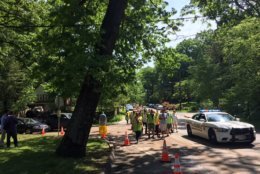 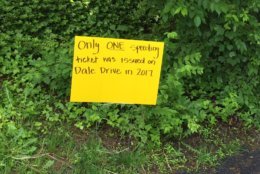 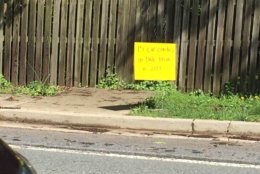 SILVER SPRING, Md. — It’s a universal complaint in residential areas — people hate how fast and how frequently cars speed by their homes. But one neighborhood in Montgomery County has found what even their local county councilman calls an “unusually effective” way to bring about change.

On an average day, about 4,000 cars use a 1-mile stretch of Dale Drive between U.S. Route 29/Colesville Road and Georgia Avenue in Silver Spring. But if there’s anything tying up traffic even more so than usual on either one of those roads, that number goes way up.

While all those cars are zooming by, at speeds that usually exceed the 30 mph speed limit, residents who live here don’t have any sidewalks to walk on and only a few crosswalks to rely on. In fact, those sidewalks are usually to blame for accidents because when one car stops for a pedestrian, someone driving behind doesn’t always stop in time.

Such an accident happened only a few minutes before a safety walk that was organized by residents who live along and around this stretch of Dale Drive.

“As you can see we don’t have any traffic calming, we don’t have any sidewalks, no bike lane, and there were 11 crashes on this one mile section of road last year,” says Corinne Hart, who helped organize a safety walk attended by around 100 residents and politicians Sunday. “A pedestrian has been killed here. His family is here today, and we’re just urging the county to do something about it.”

Hart says it was a walk around the neighborhood while pushing a stroller that first alarmed her, and after talking to her neighbors she realized there were 20 years of complaints that had gone pretty much ignored. So she organized her neighbors and started pushing both the county bureaucracy and the elected leaders at the county and state level, and that’s already led to some noticeable changes in the neighborhood.

Among the changes is the “construction of pedestrian islands in three of the (seven) crosswalks, short medians to narrow the roads in some of the areas where the lanes are really wide (and) new signs,” says Hart.

The county is also studying bigger, more permanent changes, which could include a path for pedestrians and cyclists. It might convince Julie Ipe, who lives on Dale Drive across Route 29 to walk the straight shot more often.

She did it once before, “and I said ‘never again,’” said Ipe.

He says the residents along Dale Drive have outlined the most effective way to bring about change in neighborhoods.

“They don’t just sort of stay home and complain to each other,” says Hucker. “They research the problem, they look at what studies have been done, they call us and they write us, and they document the problem.”

“Most importantly, they come to Rockville … they talk to my colleagues, they talk to the department of transportation, they talk to the county executive, and it’s made it easier and more effective for me to advocate for their request because people understand the problem.”