During an event Wednesday at the People’s Community Baptist Church in Silver Spring, Chief Tom Manger discussed some of the ideas people have proposed in hopes of making schools safer.

“The dumbest idea I’ve heard in my 40 years of being a police officer is arming teachers,” Manger said to applause, adding, “More guns do not make us more safe.”

The chief also opposes adding metal detectors at school entrances because of the message he fears it would send to young people. “We cannot make these schools armed fortresses,” he said. “We can’t put gates up [and] fences up.”

“He’ll shoot the people at the metal detector and walk right in and do whatever he wants to do,” he said.

It’s been recommended that Montgomery County Public Schools add locks to classroom doors, the chief said, but funding is needed to make it happen.

Manger also talked about how students with mental health issues who make school threats on social media are handled in his county.

“The answer’s not to put handcuffs on them and take them to jail,” he said. “The answer is to get them the help they need. And that’s what the schools are doing. We’re working with them.”

Manger said that he’s been fighting gun violence for 40 years in his job, and that he supports student-led efforts to bring about more gun control.

“For those of us that have been running this marathon for a long time, I’ve got a few miles left in me, so you can count on me to be with you,” he said. 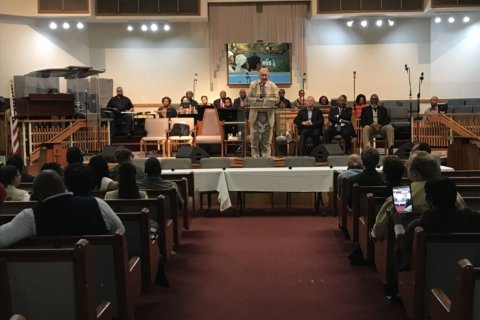