Parking headaches in the still-growing Rockville Town Center are likely keeping people away, according to members of the business community there.
Listen now to WTOP News WTOP.com | Alexa | Google Home | WTOP App | 103.5 FM
(1/2) 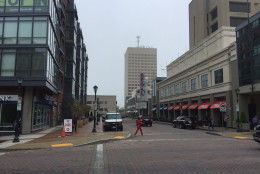 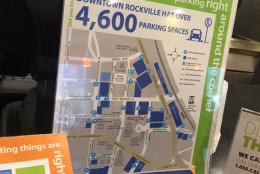 ROCKVILLE, Md. — Parking headaches in the still-growing Rockville Town Center are likely keeping people away, according to members of the business community there.

Construction has taken away surface lot parking, and visitors may be opting to instead go to two Gaithersburg entertainment hubs which also have grown rapidly: RIO Washingtonian Center and Downtown Crown, which both offer free parking.

“We know a lot of customers that have said to us, ‘We don’t go to the Regal theater anymore,'” said Bob Daly, franchise owner of the nearby California Tortilla. “The Regal theater is much closer to them, but they’re choosing to drive further,” he said.

While parking validation reduces the cost of an hour of parking at the nearest garage from $4 to $2, Daly says getting in and out of the garage can be time consuming, and some customers do not want the hassle.

When it comes to street parking, $40 violations for expired meters have been enough to drive customers away, according to Ben and Jerry’s franchise owner Marc Sosin.

“Especially if they get a parking ticket, they’ll probably go to a center that has movies and restaurants that don’t have that issue,” Sosin said.

The problems were hardly unexpected as the area transformed.

“As we go from suburban to urban, these are issues that we’re facing,” said Sosin.

Lisa Jagger, general manager of the breakfast-and-lunch restaurant First Watch, says her business is thriving, but says she believes it would do even better if not for the regulated parking.

“It is an urban area, but we draw from such a huge suburban area that people are not used to that,” said Jagger.

Garages near the restaurant in Rockville Town Square validate for up to two hours, but accessibility remains difficult for the elderly, she says. One solution Jagger proposes is creating a centralized valet parking system for shops and restaurants in the area.

Other ideas include offering free street parking on evenings and Saturdays, giving drivers a grace period after a meter expires, and making parking garage locations and pricing more clearly marked.

Members of the business community recently voiced their concerns to city leaders and said leaders seemed receptive to finding solutions.

Another business owner who asked not to be identified said she would like to see drivers be allowed to park for longer periods of time on the street, but otherwise accepts the parking situation.

“I don’t think that it’s driving people away,” she said. “Obviously everybody likes free parking, but it’s Rockville city, so what do you expect?”