Tom Lohr’s adventure: A hot dog at every MLB park

WASHINGTON — It’s a lifelong dream for many baseball fans.

Imagine taking the summer traveling the country, going state to state on the open road, hitting all 30 Major League ballparks in the same season. One man just completed that journey, eating a hot dog at each stop and ranking both the venues and the eats on his blog.

Tom Lohr is a Tulsa, Oklahoma resident, who grew up a Pittsburgh Pirates fan in West Virginia. Later, he moved to San Diego, where he lived for 12 years and became a fan of the Padres. But he became a true baseball nomad this year, visiting not only all 30 MLB parks, but 34 minor league ones as well as he twisted his way across better than 18,000 miles of U.S. highway.

Lohr’s journey began April 12 and included three legs — one through the Southwest up to Seattle, one into the upper Midwest, and finally out to the East Coast — with short stops back in Tulsa between each one. The trek took a total of 104 days (including those short breaks), wrapping up Thursday, July 24.

Fittingly enough, that was the day after National Hot Dog Day.

“It’s every fan’s dream to go to every ballpark in a season,” he says.

That may be true, but the trek was not an easy one. Most nights Lohr slept in his Toyota RAV4, only occasionally splurging on a hotel room for a bed and a shower. He estimates he spent roughly $2,000 on gas alone.

Lohr originally thought he would only travel 11,000 miles, but ended up nearly doubling that in order to catch teams when they were actually playing at home. Sometimes he got lucky, like when he saw five big league clubs (and a minor league one) in six days in the Midwest. Other times, not so much, like when he spent five days in Roswell, New Mexico, waiting for the Arizona Diamondbacks to return from the road.

Before his trip, Lohr reached out to the National Hot Dog and Sausage Council, based here in D.C., to help him with his rating system.

“They brought up a couple of categories I wouldn’t have thought about, especially portability,” Lohr says.

Which hot dogs have that “it” factor? Well, there’s the Dodger Dog, a longtime staple in LA. At Globe Life Park in Arlington, Texas, the Rangers are serving up “The Boomstick,” a 2-foot long chili dog with nacho cheese, jalapenos and caramelized onions that runs about 3 pounds (and $26). And in Baltimore, the Crab Mac and Cheese dog gets high marks for both its ingenuity and its tie to the local culture.

But Lohr’s rating system did not apply to the specialty dogs, only the standard-issue serving at every park. And only one park earned a perfect score of 30 for both the ballpark and the frank.

“The whole baseball world sort of owes Baltimore for doing the whole retro trend right,” he says. “It’s a baseball park. It looks like it, feels like it. It’s nicely done.”

In contrast, Lohr was not as big a fan of AT&T Park in San Francisco, often cited as one of baseball’s finest venues. He cited both the Disneyland-like feel of the oversized glove in left field and the prohibitive cost of concessions as negative marks.

While in Washington, Lohr actually met up with the vice president of the NHDSA at the original Ben’s Chili Bowl on U Street, but had the standard hot dog in his visit to Nats Park. He was able to pick up one of the $5 grandstand seats for his game, which added to the experience, and as someone who has worked in the environmental field, he appreciated the fact that Nationals Park is LEED Silver Certified.

“They’re both fabulous venues where you can see a game and not drop a lot of coin doing so,” he says of Baltimore and Washington’s baseball homes.

Not surprisingly, Lohr says the best part of the trip wasn’t the myriad ballparks or the endless hot dogs, but all the great baseball fans he met along the way. So, what was the biggest surprise he found on his journey?

“Not as many people thought I was crazy as I thought there would be.”

Lohr is running a Kickstarter campaign to fund a book about his journey, “Gone to the Dogs.”

To see all the ratings and learn more about Lohr’s journey, visit Blog About a Dog. 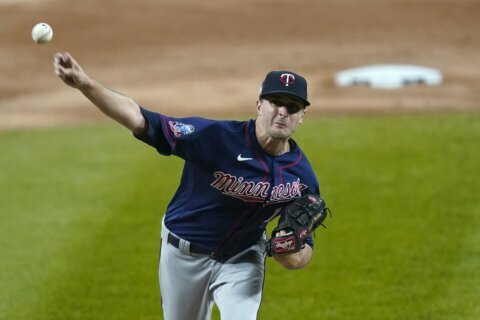 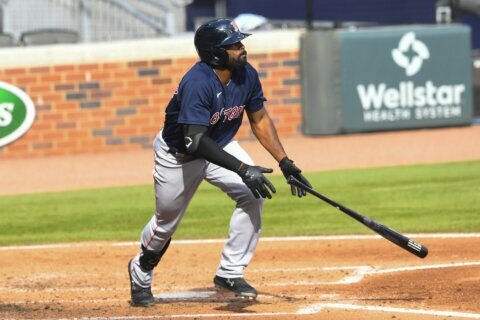 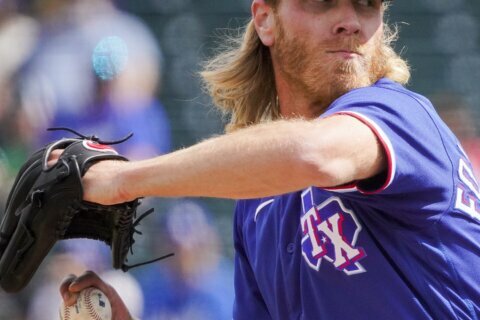