On this Memorial Day weekend, American servicemen and women — and the mothers, fathers, sisters and fellow soldiers who love and mourn them — share personal stories of strength and sacrifice that arrive at the heart of what it means to serve one's country.
Listen now to WTOP News WTOP.com | Alexa | Google Home | WTOP App | 103.5 FM

WASHINGTON — On this Memorial Day weekend, American servicemen and women—and the mothers, fathers, sisters and fellow soldiers who love and mourn them—share personal stories of strength and sacrifice that arrive at the heart of what it means to serve one’s country.

“Soldier Stories: Memories of Love and Valor” is a co-production of CBS Radio News and StoryCorps, the oral history project that has been working for more than a decade to record, preserve and share the stories of Americans. Listen to the full recording above or individual stories below.

‘Tattooed on your soul’

World War II veteran Frank Curre shared his experience during the Japanese bombing of Pearl Harbor. What he saw left an indelible mark that remained with him throughout his life.

‘I had my ticket punched by my nephew’s blood’

Barry Romo enlisted while his nephew Bobby Romo, who was only a year younger than him,” was drafted during the Vietnam War. Bobby wanted to get out of the field and asked Barry if he could help. But it was Bobby who helped Barry get home.

‘I have to earn what I get to love each day. It’s a gift’

Monica Velez took care of her two brothers growing up when their mother left. She was like their mother, getting them dressed, telling them what to do. When they joined the service, they threw her a “demotion party” because she now has to live like a young adult instead of acting like a mother.

“Catch you guys on the flip side,” was the last thing Travis Williams said to his unit, as he rode another vehicle because there was not enough room in the vehicle the rest of his platoon were riding in.

Max Voelz got married to Kim when he was 25. They were both in the Explosive Ordinance Disposal Unit, the bomb squad.

“I would give anything for one more hug”

Shirley Parrello lost her son Brian in Iraq, he was the only member of his marine platoon who didn’t make it home. Parrello and one of Brian’s platoon mates Kevin Powell share the story of how they met and the sons Shirley gained. 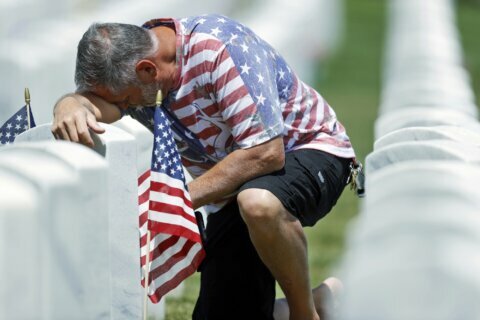