Holidays: Where to see holiday lights | Santa's back with inflation, inclusion on his mind | 4 ways to limit your holiday debt | Inflation 'definitely a guest' at holiday celebrations this year
Home » Maryland News » New Md. House speaker…

Ever since her election to Maryland House Speaker in May after the death of longtime Speaker Michael Busch, Adrienne Jones — the first African-American woman to be elected to the post — has emphasized the need for lawmakers to unite.

Asked about her relationship with Gov. Larry Hogan, the first Republican to win reelection in Maryland since Theodore McKeldin in 1954, Jones said they mostly interact during the legislative session.

Going forward, she said she hopes to have good relations with Hogan, who has touted Maryland state government as having a bipartisan bent but hasn’t hesitated to criticize lawmakers, especially on fiscal issues.

“I think that anytime you have open dialogue, it yields a better result.”

Maryland’s Senate leadership has been the topic of discussion in Annapolis. Senate President Thomas “Mike” Miller has served for more than 30 years, and at the start of the latest Maryland General Assembly Session, he announced he had prostate cancer, and would be undergoing treatment, but would continue to serve.

Jones said the two keep in touch regularly, and that within weeks of her election to the speakership, she had lunch with Miller, “and we talked about some of the needs of the state.”

Jones told WTOP she’s not privy to discussions about who could succeed Miller.

“Oh, no, I’ve heard — just like you’ve heard — the names that have been thrown out in the press,” she said, shaking her head.

The names, as reported by Maryland Matters, include Sen. Nancy King of Montgomery County, Sen. Guy Guzzone of Howard County, and Sens. Paul Pinsky and Douglas “J.J.” Peters, both of Prince George’s County. Jones had no further comment on the question of future leadership.

In Maryland, lawmakers are in session for 90 days out of the year — but those 90 days are dawn-to-late-night sessions of meetings, hearings and floor votes.

As speaker, Jones works year-round in Annapolis, and during the final days of the legislative session, when as speaker pro tem she stood in for the late Speaker Michael Busch, she took to his custom of wearing athletic shoes on the final, marathon day of the session, called “sine die.”

Jones was asked how she would handle the demands of the job as speaker.

“We have staff folks who will put things on the calendar that will give me a break,” she said.

Sitting behind the desk in the office that is now hers, she indicated that the former speaker is never far from her. “We’ve still got him right there,” she said, indicating a photo on the bookshelf just over her shoulder.

“We truly cared about this institution, we care about the members that we have to lead in our role as speaker, and he would want us to be unified as a body,” she said.

Jones said she did put her own stamp on the office. There’s a fresh coat of paint, the big La-Z-Boy recliner that Busch favored is gone and there are plants — a small flowering plant on the desk, other, larger plants scattered around the office.

There also is a photo of Jones with former First Lady Michelle Obama. She smiles when that’s pointed out. Jones says like Busch, and many of her colleagues, she’s a true believer in the good that government can do.

Jones, who is seen as a steady, sometimes no-nonsense lawmaker by her colleagues, encourages state residents to get involved, and contact their state leaders when they have an issue or a problem.

“You’ve got to look at it in simple terms: if you don’t make that call, you definitely won’t get helped.” 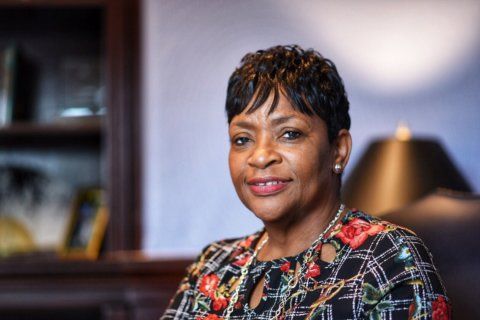