Maryland Gov. Larry Hogan said he blames "everyone in Washington" for the shutdown, which has now stretched to 34 days. At a news conference at BWI Marshall Airport, Hogan announced all state transportation services would be free for federal workers during the shutdown.
Listen now to WTOP News WTOP.com | Alexa | Google Home | WTOP App | 103.5 FM

HANOVER — Maryland Gov. Larry Hogan announced that due to the partial government shutdown, all forms of Maryland transit service would be free for federal workers who are on the job without pay.

The free rides are good on all transportation services offered by the Maryland Transit Administration, including the MARC train, the Baltimore Metro and BusLink.

“So that means … every single state transportation service is going to be free,” he told reporters.

Hogan made the announcement as he visited federal workers on the job at BWI Marshall Airport to thank them for the job they’re doing, and to tell them, “Maryland’s got your back.”

Clearly frustrated by the impact that the longest-running shutdown is having on Maryland residents, Hogan, a Republican governor in a state where Democratic voters still outnumber Republicans 2-to-1, said “I blame everyone in Washington for the shutdown.” 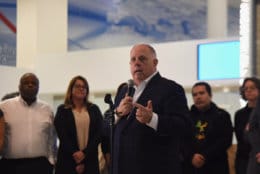 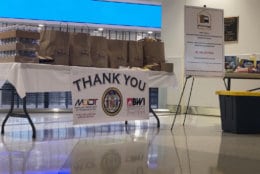 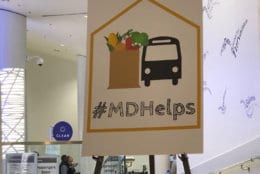 Hogan called on the president and members of Congress — members of both parties — to “fix this.” Hogan said, “They’re playing stupid political games and we’re talking about people’s lives.”

Hogan said while the state is taking a hit in the form of revenues that aren’t being collected, he was most concerned about the impact on workers and their families.

“We have 150,000 Marylanders and their families that are impacted,” he said. “These are real people. These are people who aren’t getting a paycheck.”

In addition to announcing the free transit service for affected workers, Hogan announced a statewide food drive called #MDHELPS being administered by the state General Services Administration, with 15 sites scattered across the state.

Hogan also said he’s talked with banking industry officials in the state who are trying to work with federal workers who are running up against late payments and concerns about their credit ratings.

Utility companies like Exelon and Pepco are also working to ease the pain caused by the shutdown, Hogan said. “They’re working with people on utility payments, where they’re not charging late fees,” he said.

Hogan said he’s also concerned about the implications for national security. While the debate in Washington focuses on the security of the nation’s southern border, Hogan said the people affected in the Baltimore-Washington region also provide critical security for the country. “They’re here basically protecting people’s lives — and they know it — but we’ve got to get them paid,” Hogan said.

Hogan also said he wanted to express his appreciation for the work that workers — from federal Air Marshals, to TSA agents — do to keep people safe every day.

“I’ll tell you what, I was very impressed by the dedication of these federal employees who all are here working,” he said. 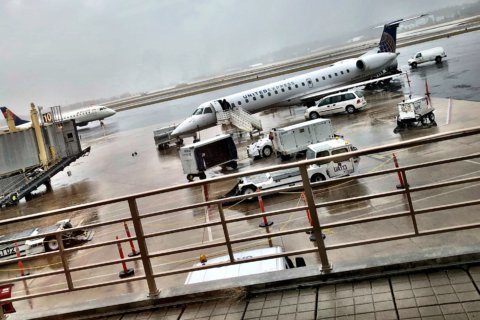 Metro not cutting service (yet) due to government shutdown