Grants will provide $15,000 to each of the state's 24 school systems. The technology helped one Montgomery County girl keep up with her studies as she battled cancer.
(1/2) 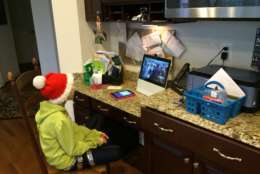 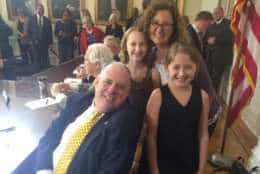 WASHINGTON — When kids can’t join their classmates for school, Maryland has found a way to bring the school to the student: virtually.

The state will provide $15,000 in grant money to each of the state’s 24 school systems, which will pay for technology that links kids to their classrooms through devices such as those used by a Montgomery County girl who couldn’t attend classes when she underwent treatment for a rare cancer.

The program that the Maryland State Department of Education is adopting is an outgrowth of “Peyton’s Law,” signed by Gov. Larry Hogan in 2017.

Peyton Walton, of Poolesville, was able to “attend” Poolesville Elementary School in 2015 using a device that had a tablet computer attached to a robot that rolled through the school’s hallways. The device allowed Peyton to keep up with her fifth-grade classwork and interact with teachers and friends while undergoing treatment.

Lynn Schaeber, Peyton’s mom, explained that Peyton had just moved to Poolesville from New Jersey and had just received the cancer diagnosis before the move. “So, it was really important for her to be able to get to know her classmates and to connect with them in some way,” she said.

While adults were concerned about handling the new technology and how the kids would adapt, Schaeber said they were struck by how students took to it without missing a beat.

“You know within minutes these kids pick up,” she said, laughing.

Now that all of Maryland’s 24 school systems will get funding for up to four devices each, Schaeber had one piece of advice: “Don’t be afraid. This is really a seamless technology. The kids will probably be better at running it than the grown-ups in the room.”

Schaeber gives the governor and the state credit for moving ahead with a new technology. Hogan, she said, clearly “got it” — understanding how the technology can help eliminate the isolation that a student patient can feel while missing school to get treatment.

“Through this innovative program, state-of-the-art technology will give students facing extended medical challenges the opportunity to remain connected to their school, teachers and classmates,” said Hogan, a cancer survivor who met with Peyton when the bill that bears her name was being considered.

According to Schaeber, Maryland is the first state in the country to enact this type of legislation.

“This is a brand new idea,” said Schaeber, who is organizing a not-for-profit in an effort to spread this type of program to other schools in other states. She’d also like to see the technology made available in hospitals, and is working on that with Children’s National Medical Center, which she refers to as “Peyton’s hospital.”

Asked how Peyton is doing now, Schaeber bubbles over. Peyton has had no evidence of the disease for two years.

“She’s a blossoming seventh-grader and doing all the great things that she should be doing,” Schaeber said.

Peyton told her mother she wanted to go on an Outward Bound trip over the summer, said Schaeber, who laughed as she told the story of what she then asked her young daughter.

“Why on earth do you want to hike 10 days in the wilderness?” she asked. Peyton, she said, responded, “Mom, I survived cancer. What’s 10 days in the mountains?”