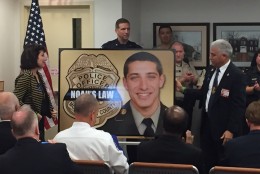 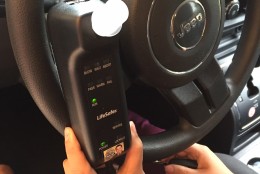 ROCKVILLE, Md. — Area drivers are being put on notice about a tough new stand on drunk driving, which takes effect early Saturday.

“[At] 12:01 [Saturday], Noah’s Law goes into effect,” Rich Leotta said Friday at a gathering of the law’s supporters ahead of its implementation.

Rich Leotta is the father of Noah Leotta, a 24-year-old Montgomery County police officer struck and killed by a drunk driver during a traffic stop last year, and after whom the law is named.

“Maryland’s law enforcement community is alerting all drivers” about the consequences under the new law, said Montgomery County Sheriff Darren Popkin, who helped push the legislation through. Under the law, a driver who fails a police breath test with a blood alcohol content reading of .08 or higher would be required to use an ignition interlock device on his or her car for six months, Popkin said.

If a driver refuses to take a police breath test, he or she would either have to use the interlock for nine months or have his or her license suspended. Anyone convicted of driving under the influence or driving while intoxicated would also be required to install the interlock devices.

“You will not be able to start your car if you cannot blow into the machine and we see that there is no alcohol in your system,” said Montgomery County State’s Attorney John McCarthy.

Ana Villatorro, with LifeSafer Interlock service, says drivers will also be asked to take a test while driving, and if the test is not done within 10 minutes, the car’s horn will begin honking. Renting the device costs about $80 a month, Villatorro says.

The measure was signed into law by Gov. Larry Hogan in May.