Michael Wardian has sat in traffic on the Capital Beltway and thought, “Wow; I wish I could just park my car here and take off and run home." This weekend, he ran the entire loop of the iconic highway.
Listen now to WTOP News WTOP.com | Alexa | Google Home | WTOP App | 103.5 FM

Michael Wardian has sat in traffic on the Capital Beltway and thought, “Wow; I wish I could just park my car here and take off and run home.” On Saturday, he ran the entire loop of the iconic highway.

Wardian, of Arlington, Virginia, was unable to run on the actual Beltway, which is around 64 miles.

“I always thought, like, ‘How would I [run the Beltway]?’ Because you can’t really run on the road,” said Wardian. “And then I thought, ‘Well, maybe I could have, like, a police escort or just run in the breakdown lane.’ And then I realized you have to coordinate with, like, three different people and I was just like, it’s probably never going to happen.”

He said he had those ideas more than 20 years ago, but as he began running longer distances, he figured he could run around the outside of the Beltway.

He got the idea from his friend Phil Hargus to use the running app Strava to plan the route. He also had his dad, Richard, by his side. Once he had his crew and the plan was set, he set out.

Wardian said the run posed some challenges, especially the heat: “It would’ve been nice to have a crisp fall day to do it,” he said. “It was definitely a challenging run.”

Saturday was the hottest day of 2019 so far. 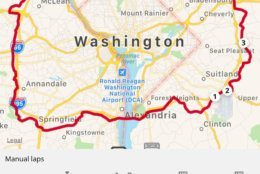 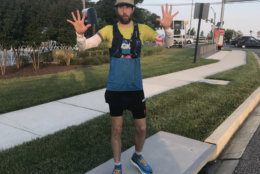 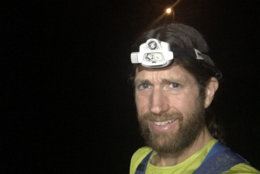 He added that the highway was “a bit hillier than I expected it to be,” but he’s glad he stuck to it.

“To be able to run something so iconic is really impactful and something that I’ll cherish for a really long time,” he said.

Wardian grew up in Oakton, Virginia, and the Beltway has always been a symbol for him. And this accomplishment has set the pace for even bigger goals.

“I want to try and win the Marine Corps 50k this year; I want to run across the United States, which is a really big goal,” he said.