Ghost Roads V: ‘Not all who wander are lost’ on outskirts of Frederick

What stories do D.C.-area ghost roads tell? For decades, even centuries, the ghost bridges of Maryland and Virginia were spectators to history, war and death. Unearth the past of a ghost road on the outskirts of Frederick, Maryland. See photos.
Listen now to WTOP News WTOP.com | Alexa | Google Home | WTOP App | 103.5 FM

FREDERICK, Md. — It’s scrawled in red on the parapet of an abandoned bridge: “Not all who wander are lost.” The sentiment, borrowed from J.R.R. Tolkien, is a reminder that a ghost road on the outskirts of Frederick, Maryland, is not entirely forgotten.

There are bridges left to waste in all corners of the world, but the orphaned mammoth that has spanned the Monocacy River since World War II carries not just the weight of macadam but also of tragedy.

Wind whisks through its hollow spandrels. The gnarly branches of sycamores claw at its haunches. But the sound of traffic is only heard from downriver on its replacement, a newer bridge for the Old National Pike.

On both ends of the old span, the remnants of the old turnpike wither in the forest. Toppled trees and tenacious vines encroach on the road’s faded skip line.

Though it is no longer traversed by motor vehicles, evidence of passersby, vagrants and misfits can be found. A makeshift skate park was cobbled together on the crumbling roadway west of the river. Graffiti is not as pervasive as it is along many ghost roads, but “Josh and Rachel” have both been here.

The din of traffic on the nearby Old National Pike settles by dusk. 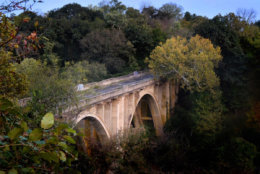 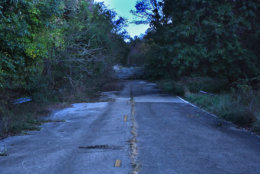 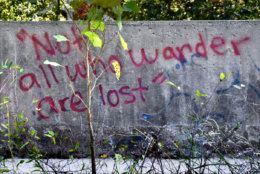 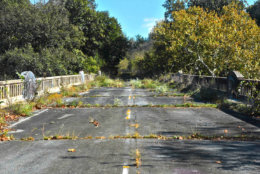 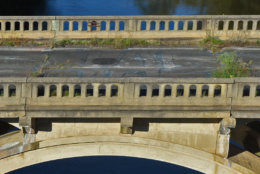 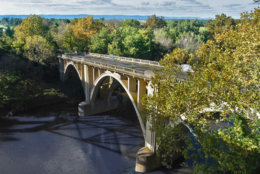 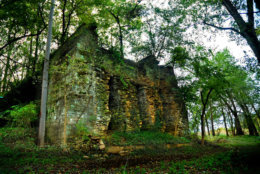 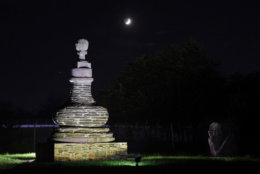 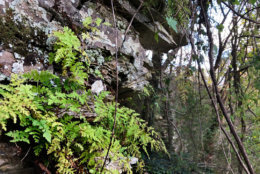 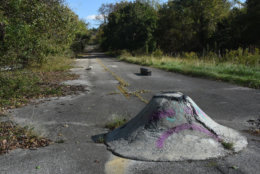 The ghost road and its nearby successor were once counterparts, the closed portion once serving as a 2-mile carriageway for westbound traffic. Present-day Old National Pike, or Route 144, carried eastbound traffic. When a straighter, safer alignment for Interstate 70 was finalized between Frederick and Linganore in 1985, the oldest bridge and its approaches were immediately closed.

The road was decommissioned unceremoniously. Weeks before, on a rainy Sunday afternoon, a charter bus from Baltimore had careened out of control on the bridge, ejecting most of its passengers in one of Maryland’s most horrific highway crashes. The bodies of the driver and a man seated behind him were thrown into the ravine 70-feet below the bridge.

The National Transportation Safety Board determined that excessive speed, weather conditions, poor pavement and inadequate signage led to the disaster on that day.

The tragedy that transpired at the bridge overshadows any conversation about the structure’s grandeur, history or longevity. It stands quietly as a memorial to the six lives lost during its final year in service.

The closed structure is sometimes referred to as the Jug Bridge. The original Jug Bridge was completed in 1808. It collapsed in 1942, but the ashen ruins of its two abutments can still be found in the underbrush just north of Old National Pike.

The four-arch bridge was considered an engineering marvel for early America. Its namesake, a large demijohn made of stone, was once prominently mounted on the eastern side of the span. Legend has it that the workers who constructed the bridge sealed a jug of whiskey in the sculpture.

The old jug held its station through so many fateful years
It watched the changing problems that created sighs or tears;
It saw the trucks and autos come along in all their might —
And at last its heart is broken and its walls have said good-night.

Now, the ornamental jug is displayed at a park off I-70 less than a mile away, having overseen two centuries of triumph, traffic and tears.