WASHINGTON — The 12th-annual Chesapeake Bay Report Card is out. And 2017, like the previous year, earns a “C.”

But there are signs of positive, significant improvements, the scientists who conducted the survey said.

Beneficial underwater grasses are at the highest level ever recorded since the University of Maryland Center for Environmental Science began doing the evaluation. Fish populations earned an improved A+.

“The dead zone, it’s shrinking,” said Bill Dennison, vice president of science application at the University of Maryland Center for Environmental Science. “Overall, the bay for the first time is going in the right direction. We’ve turned a corner. We’re making improvements.”

An overall health index score for 2017 was 54 percent, which the report states is moderate overall, but it reflects a trend of significant improvements.

“The investments are working. We are seeing the progress,” said Maryland Environment Secretary Ben Grumbles. While improvements deserve to be celebrated, Grumbles said, all partners need to re-commit to making progress. 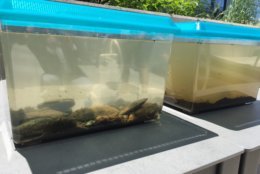 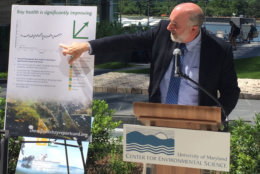 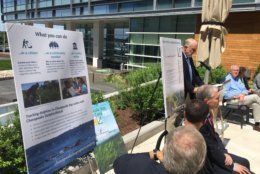 Nitrogen from air pollution is one of the three biggest bay pollutants, along with phosphorous and sediments.

“I can tell you that Maryland will continue to push hard for progress upwind as we also push for progress upstream in the Susquehanna River and all the key tributaries to the Chesapeake Bay,” Grumbles said.

Since 1999, watershed restoration efforts from New York down to Virginia have been supported by the National Fish and Wildlife Foundation. The foundation was created by Congress in 1984 to provide private support to federal agencies focused on conservation.

“We’re thrilled to be initiating this year a new five-year partnership with the University of Maryland Center for Environmental Science, specifically to support this Chesapeake Bay Report Card moving forward,” said Jake Reilly, director of the Chesapeake Bay program for the National Fish and Wildlife Foundation.

The report card will expand its scope both geographically and socially in upcoming years. It will include evaluations of rivers and streams that feed the bay estuary. Another new focus will be on the connection between ecosystem health and the social, economic and cultural fabric of the region.

“We’re sitting here at The Wharf — a beautiful example of what can happen when we have a restored river system that is a tremendous recreational and economic asset,” Reilly said.

Two quick, easy ways to help the health of the bay, Dennison said, are to use less fertilizer and to plant a tree.