Ways to celebrate Earth Day 2017 in the DC area

WASHINGTON — This Saturday is the 47th Earth Day. Started in 1970 when environmentalism and caring about the planet started to take hold, it has become a worldwide event. Now there are plenty of ways to celebrate the day and the environment in the D.C. area. 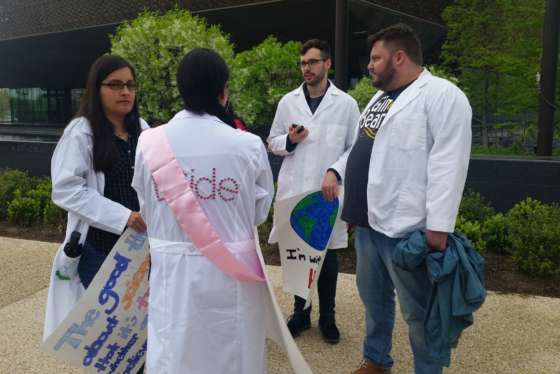 Thousands of people are expected to attend March for Science events to promote the understanding of science and defend it from various attacks, including U.S. government budget cuts.

A little background first. NASA’s Apollo missions to the Moon had a part in the creation of the movement as humans saw our planet in living color, suspended in the vast blackness of space. We saw our planet as a vulnerable world that needed our care.

Earth Day 2017’s campaign is “Environmental & Climate Literacy.” Education is key to developing awareness of the environment and climate change, and ultimately, what we can do about it.

More people may aim to protect the planet and science this Earth Day after comments from President Donald Trump that global warming is a hoax perpetrated by the Chinese to hurt the U.S. economy. Also, the Trump administration plans to slash programs aimed at slowing climate change and improving water safety and air quality, while eliminating thousands of jobs.

Earth Day Network and the “March for Science” are co-organizing a rally and teach-in on the National Mall in D.C. At the “Earth Day March for Science Rally and Teach-Ins” There will be speeches and training sessions with scientists and civic organizers, musical performances and a march through the streets of D.C. The crowd will gather at 8 a.m. and the teach-in will begin at 9 a.m.

As stated by Earth Day Network, “The March for Science is a celebration of our passion for science and the many ways science serves our communities and our world. The March for Science is an unprecedented global gathering of scientists and science enthusiasts joining together to acknowledge the vital role science plays in our lives and the need to respect and encourage research that gives us insight into the world.”

The March for Science currently has planned satellite rallies in more than 400 cities across the United States and worldwide.

I am very proud to say that the astronomical community will be well represented in the March For Science.

“Science and reason have never been more important to this country and its citizens, yet they are under attack from many quarters. If we in the scientific community don’t speak out for sensible evidence-based policy, we can’t expect anybody else to do so,” said AAS Executive Officer Kevin B. Marvel in a news release.

The march will bring road closures around D.C. Read the full list here.

NASA’s theme for Earth Day 2017 is “letting us all adopt the planet by ‘adopting’ one of 64,000 individual pieces of Earth as seen from space.” To adopt your piece of the planet, go to NASA’s website and register.

I did so and got an area in Russia. I learned much about the remote spot by looking through the various links that pertain to the area.

NASA is a vital asset in monitoring our precious planet. NASA wrote in a news release that it “continually looks outward to find and learn about planets in our solar system and beyond, but no planet is better studied than the one we actually live on.”

“Our fleet of 18 Earth science missions in space, supported by aircraft, ships and ground observations, measure aspects of the environment that touch the lives of every person around the world,” NASA said in the release.

There are a number of Earth Day events taking place in the area — here are a few:

I hope you participate in some way this Earth Day 2017.