Four adults and six juveniles have been charged in Fairfax County with abduction and gang participation in connection with the killing of a Gaithersburg teen.
Listen now to WTOP News WTOP.com | Alexa | Google Home | WTOP App | 103.5 FM

FAIRFAX, Va. — Nine people have been arrested and charged in connection with gang activity and the disappearance of a 15-year-old Gaithersburg girl, who was found dead in a Virginia industrial park on Saturday.

Police are still looking for a tenth suspect, a 16-year-old girl. The four adults and six teens have been charged with abduction and gang participation in connection with the disappearance and death of Damaris Alexandra Reyes Rivas.

Reyes Rivas went missing from her home on Dec. 10. Fairfax County police said she was killed around Jan. 8. Police were searching for her when they discovered her remains.

“(Reyes Rivas) was held against her will, taken to Lake Accotink Park and assaulted before she was killed and left nearby in an industrial park, in the 7100 block of Wimsatt Road,” in Springfield, a Fairfax County police statement said.

Another teen girl disappeared since Reyes Rivas first went missing. Venus Romero Iraheta, 17, returned to her Alexandria home on Tuesday night after she had been missing for a month.

“People that were involved in some of the abductions or the missing persons may have some sort of involvement in the murder of Damaris (Reyes Rivas),” said Lt. Brian Gaydos, spokesman for Fairfax County police. “Venus (Iraheta) is connected to this crime, yes … She is in custody. We are looking at the extent of her involvement.”

It was not clear whether Iraheta was among the teens who have been charged.

The Alexandria girl’s reunion with her mother was captured by NBC Washington TV cameras. The teen said she left home because she feared retribution after her ex-boyfriend Christian Alexander Sosa Rivas was killed and dumped in the Potomac River.

The remains of Sosa Rivas, 21, of Fairfax, were found Jan. 12, in Dumfries, Virginia.

A third teen girl disappeared for about a month along with her five-month-old baby before she returned to her mother’s Springfield home. Police described the disappearance of 16-year-old Lizzy Rivera Colindres as “domestic” in nature. Police believed that she left voluntarily with her boyfriend, Jose Castillo Rivas.

Police said previously that Castillo Rivas had some involvement in local gangs. He is now charged in connection with Reyes Rivas’ death.

Police would not identify the gangs involved, out of concern that naming them could serve to publicize them.

But Reyes Rivas’ mother told NBC Washington that the girl had been threatened by gang members of MS-13. Police have long acknowledged that MS-13 has tentacles that stretch around the D.C. area.

Fairfax County police describe the killings as isolated to one group and not involving multiple gangs.

“They all seem to be from the same group,” said Corporal Tawny Wright, spokeswoman for Fairfax County police.

Wright also said that abuse of women and girls is common among gang members in the area.

“They treat the girls horribly … emotional abuse, physical abuse, sexual abuse,” Wright said. “We need to minimize the level of gang activity in this county,” she said. 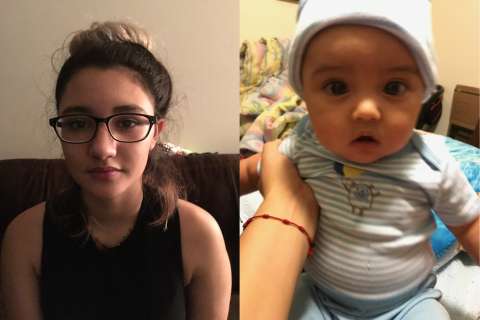