After the terror attacks at the airport in Istanbul, travelers at Dulles International Airport are nervous, but some say they won't let terrorism affect their lives. Meanwhile, police presence has increased on Wednesday.
Listen now to WTOP News WTOP.com | Alexa | Google Home | WTOP App | 103.5 FM
(1/5) 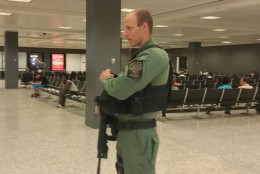 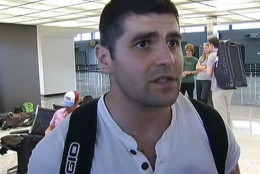 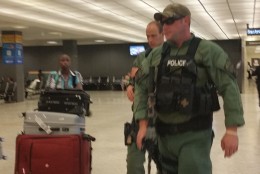 WASHINGTON — Flights between the U.S. and Turkey were suspended for several hours Tuesday night in the wake of the terror attacks at the Istanbul airport. They’ve since resumed, but travelers in the area are nervous, but some are determined not to let terrorism affect their lives.

Meanwhile, no extra security was visible at Dulles International Airport in the early morning hours of Wednesday, but more officers turned up around 8:30 a.m.

Virginia Gov. Terry McAuliffe acknowledged that security had increased during Wednesday’s “Ask the Governor” segment on WTOP. “We already had heightened security” at Dulles, Reagan National and the commonwealth’s other airports, he said, but after consulting with Transportation Secretary Aubrey Layne and Secretary of Public Safety and Homeland Security Brian Moran, “we’ve taken it to the next level.”

The Istanbul attacks, like the Brussels attacks, happened in what’s known as the “soft,” or pre-security screening, areas of the airport. Asked about the possibility of expanding airport security perimeters, McAuliffe said he had recently been on a trade mission to Brussels, and that they had done exactly that. “We’re looking at it,” he said about taking the idea to Dulles.

Meanwhile, at Dulles Tuesday night, the events in Turkey were on people’s minds. Kelly Galloway, who was waiting for a flight to Turkey, told NBC Washington, “I’m nervous to go to Turkey if they just had an explosion and gun shots.” She said she had no choice, though — she had to go.

Other families Tuesday night at Dulles were sweating it out, hoping that their loved ones had made it onto an outbound flight just before the attacks and the suspension of flights.

A U.S. official told The Associated Press that 10 passenger planes were in the air bound for the U.S. from Turkey when the suspension was announced; they all landed safely. At Dulles, NBC Washington reports, arriving passengers were greeted with hugs and balloons.

Ozzie Akcakaya and his wife were headed to Istanbul for vacation. He told NBC Washington that he was not going to let terrorists force him to live in fear.

“The only way for me to fight back against terrorism is not to change my life. So we’re not going to be scared. We will still go,” he said.

McAuliffe agreed with the sentiment, telling WTOP that “You do everything you possibly can to prepare, but it’s a very dangerous world. I always encourage folks to continue to do what you do every day. We cannot let these people dictate our lives to us. .. We gotta move on; we gotta live our lives.”

The State Department issued a travel warning on Monday, a day before the attacks, saying that tourists, including Americans, have been specifically targeted by “international and indigenous terrorist organizations.” The State Department said Americans should avoid travel to southeastern Turkey, particularly near the Syrian border, and anywhere in Turkey they should stay away from large crowds and political gatherings.

The Metropolitan Washington Airports Authority issued a statement in light of the attacks saying that the No. 1 priority is always the safety and security of passengers and airport employees.

“Reagan National and Dulles International airports have a robust security structure, both publicly visible and behind the scenes,” MWAA said in the statement.  “We constantly train our employees and evaluate our security procedures, in collaboration with our federal partners and local mutual aid partners, to make adjustments, updates and enhancements based on new information and situations.”

Authorities are asking passengers to be vigilant and remember that if you see something say something.