It may be a softball game, but make no mistake, these vets are ready to rumble.
Listen now to WTOP News WTOP.com | Alexa | Google Home | WTOP App | 103.5 FM

WASHINGTON – While the ballgame is for charity, make no mistake, it will be very competitive.

On Saturday night, NFL players and wounded warriors will take the field for the third annual CSN Amputee Warrior Softball Classic at Prince George’s Stadium in Bowie. This year’s contest is coming with changes, too.

Everyone agreed that pitting amputees against NFL players was simply not fair — to the NFL players. The first two years, the all-amputee teams trounced their pro-athlete competitors. As a result, each team is now a mix of NFL players and wounded warriors.

“These guys were athletes before they joined the service,” says Van Sleet, noting that many played sports in high school and college. “They had some skills, but they had to re-learn everything” after suffering injuries in Iraq and Afghanistan.

The event is a homecoming for Jonathan Herst, who is a graduate of Richard Montgomery High School in Rockville. Herst, who lost a leg to an improvised explosive device in Iraq in 2005, plans on talking some trash to NFL players who also went to school in this area.

“When I was in high school, we used to beat them pretty easily, so we’ll see what kind of trash they want to talk back,” says the retired Army staff sergeant.

NFL players from the D.C. area taking part include NaVorro Bowman, of District Heights, and Darnell Dockett, of Burtonsville, who both play for the San Francisco 49ers.

In all, more than two dozen NFL players are involved, including the Redskins Kirk Cousins, Will Compton, Kedric Golston and Niles Paul. The Ravens Dennis Pitta and first-round draft pick Breshad Perriman are also among those playing.

The event gets underway at 7 p.m. Saturday. Tickets are available at the stadium or at CSNWashington.com/softball. 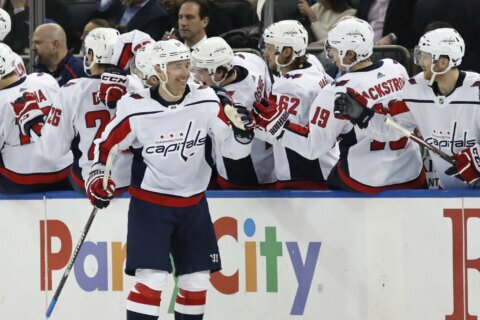