Managing unconscious bias and talking to kids about race

Stanford University psychology professor Jennifer Eberhardt will never forget the time she boarded a plane with her 5-year-old son. His eyes, wide with excitement, surveyed the cabin for a few minutes before he pointed out a man that he said looked like “daddy.”

Other than being the only black man on the plane, Eberhardt was confused by the association, but decided to give her child the benefit of the doubt and find some characteristic that resembled her husband. She looked for similarities in height and weight, and in skin tone and facial features. When she realized the man her son picked out had long dreadlocks — nothing like her husband’s bald head — she decided it was time for a chat.

“I thought, ‘OK. So now I’m going to have to have this conversation with my son about how not all black people look alike,’” said Eberhardt, a social science researcher whose work focuses on racial bias. 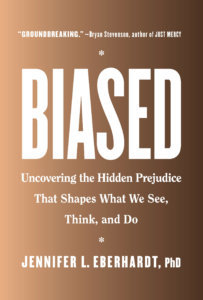 But before she could, her 5-year-old interrupted with something she never expected.

“He looked up at me and said, ‘I hope he doesn’t rob the plane,’” Eberhardt recalled.

She was stunned, and when she asked her son what made him say that, he didn’t have an answer.

“So we’re living with such severe racial stratification that even a 5-year-old can tell us what’s supposed to happen next,” said Eberhardt, who added that moment made her realize she couldn’t protect her son from the stereotypes and prejudices that existed in the outside world.

“And I felt bad, too, because I wondered about the day that would come where he would realize that he could be a target of his own associations — this association of blackness with crime and criminality and threat and aggression, and that made me sad, as well.”

Nearly everyone is guilty of harboring unconscious bias — what Eberhardt defines as the thoughts and feelings that we have about social groups that can influence our decision-making and our actions even when we’re not aware of it. And if left unchecked, this bias can lead to “really negative consequences” that “deepen” the inequalities in our world.

In her new book, “Biased: Uncovering the Hidden Prejudice That Shapes What We See, Think and Do,” Eberhardt presents the science behind racial bias, as well as strategies to help individuals and institutions manage it.

One reason you can’t completely rid yourself of bias is because, to some extent, it’s a normal function of the brain. Eberhardt said our brains are built to categorize; it’s how they make sense of all the stimuli that’s thrown at them every second of every day.

“We categorize everything, not just people, but we categorize furniture and cars and birds — you name it,” Eberhardt said.

“But when it comes to people and they’re sorted into categories, there are beliefs and feelings that get attached to those categories. And the beliefs, we call stereotypes and the feelings, we call prejudice.”

And this type of categorization can become a precursor for bias, and bias can affect behavior.

Eberhardt said racial bias is much more likely to be triggered when decisions need to be made quickly and one is more “likely to fall back on automatic, fall back on intuition.”

“Another example is when we’re feeling depleted or stressed or threatened, those kinds of feelings can trigger bias and lead us to act on it,” Eberhardt said.

Allowing time to slow down, think things through and apply objective standards can help to avoid a bias outcome.

Eberhardt recently worked with the online community platform Nextdoor to address an uptick in racial profiling on its site. It turns out the addition of prompts that slowed down users and asked them to describe characteristics of suspicious behavior, and not just skin color, for example, led to a significant decrease in racial profiling.

“There are lots of these conditions under which bias can emerge, and so we’re trying, as social scientists, to figure out what those conditions are and how to help people,” Eberhardt said.

Talking to kids about racial bias

Raising “colorblind” kids may seem like the best approach when it comes to parenting, but Eberhardt said ignoring racial differences can backfire, and that’s because it overlooks inequalities in the world.

“And so we end up magnifying those inequalities rather than combating them,” Eberhardt said.

It’s never too young to start talking to your kids about race. Eberhardt was asked by her children’s elementary school principal to speak to students and parents about her career in racial bias, particularly her role in working with law enforcement and the criminal justice system on the issue.

At first, she dreaded the invitation. Then, when driving her kids to school one day, one son asked her, “Mommy, why is Baltimore on fire?”

He was referring to the news on the radio reporting the protests of Freddie Gray’s death. That’s when she knew she had to talk to her children and their peers.

“Just because we’re not talking to our children about race and all these issues, doesn’t mean that they’re not hearing it. They’re exposed to it, they’re absorbing it. And when we don’t talk to them, we leave them alone to fend for themselves, to grapple with these issues on their own. And I feel like it’s our responsibility as parents to have these discussions so that we can help them through this,” Eberhardt said.

“We don’t talk to them because we want to protect their innocence, but there’s a way in which we do them a disservice. We’re not protecting them, actually, we’re exposing them to all of this without any guidance.”