WASHINGTON — The sounds that escape Dr. Nimali Fernando’s pediatrics practice deviate from the typical sniffles, coughs and cries. A few of those may hover around the waiting room, but listen closely and you’ll also pick up chomping, cheering and, yes, cooking.

“Alright, let me see your dinosaur teeth, everybody! Who has dinosaur teeth?” Fernando recently asked a group of 3- and 4-year-old preschool students visiting her Spotsylvania, Virginia-based pediatrics practice.

Wide open mouths and boisterous “ahhs” ensued as the little ones eagerly displayed their powerful molars.

“I have dinosaur teeth, too,” Fernando said, playing along. “And when I’m trying new foods, do you know where I try? On my dinosaur teeth.”

With one crunch, Fernando’s apple slice was gone, and soon, so were the children’s. Crowns of broccoli and cubes of fresh pineapple also fell victim to Fernando’s delighted dinosaurs.

It was all a big game to the preschoolers, but to Fernando, working on healthy eating habits is a serious matter that began several years ago, when she started tracking a troubling trend.

“I was in private practice and I was seeing a lot of kids with obesity, kids that were overweight, that were at the top of their growth curve and suffering a lot of consequences from that,” Fernando said.

At the same time, more youngsters were coming in with complaints of anxiety, constipation, acid reflux and attention issues. Fernando connected the dots and discovered that all of the symptoms, no matter how different, stemmed from the same thing: a poor diet — “that average American fiber-less diet of mac and cheese and pizza and chicken nuggets,” she added.

“For a kid to taste broccoli, they might need to just play around with it a few times.”

It’s simple to tell children and their parents they need to eat healthier. Equipping them with the knowledge, skills and resources to do so proved more difficult — especially in the span of a hurried wellness visit.

“I decided the normal 15-minute office visit that so many of us physicians normally have with our patients wasn’t enough to give families information,” Fernando said.

So she started a food blog, called Doctor Yum, where she could refer patients to find healthy, kid-tested recipes to make at home. The simple site caught on with her patients and their families, and Fernando expanded offline, offering cooking classes for 7- to 12-year-olds out of a local church kitchen.

“Body mass indexes were dropping — it was really quite inspiring,” Fernando said.

Still, there was a demand for more. Younger siblings of the cooking scholars wanted to participate. Already stretched for time as a practicing physician and a parent, Fernando couldn’t add more classes. Instead, she developed a preschool curriculum with feeding specialist Melanie Potock, so local teachers could lead nutrition lessons in their own classrooms.

As food became more of a focus in Fernando’s approach to medicine, she decided to start her own practice. In 2014, she opened Yum Pediatrics, which is one-half doctor’s office and one-half test kitchen, out of which she runs her nonprofit, Doctor Yum. 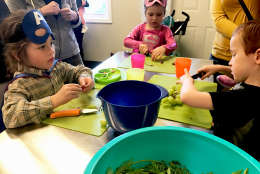 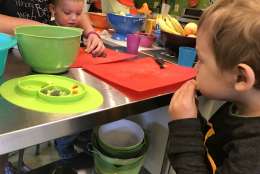 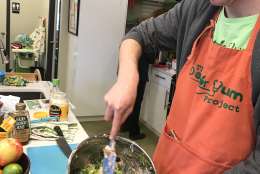 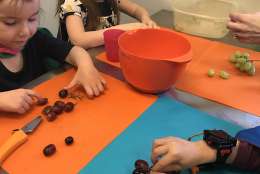 “I thought, if I really want to teach my patients how to eat better, I need to have a kitchen,” said Fernando, who is co-author of the book, “Raising a Healthy, Happy Eater.”

On any given day, the pediatrician’s practice is filled with 12 preschoolers learning how to make a fruit salad, or a handful of 12-year-olds discovering curry for the first time. When classes are not in session, the kitchen is occupied by the nonprofit’s cooking instructors developing new recipes, or board members planning grant-funded programs.

“This way, I can see patients on one side of the building or go into the kitchen side and participate in whatever is happening,” Fernando said. “It’s proven to be a really interesting way of practicing pediatrics, but it’s absolutely different and fun every day.”

Kids may be Fernando’s patients and students, but parents are an important part of her outreach. After all, they are the ones shopping, cooking and meal planning for the family. Handouts are sent home from school, and moms and dads are encouraged to rope their little ones into dinner prep. Instructors even work with adults to dismantle long-established mealtime etiquette.

“For a kid to taste broccoli, they might need to just play around with it a few times. They might need to touch it, break it and see how it sounds. They might want to dip it in paint and see what kind of paint print it makes,” Cannon said, adding that familiarity with a food makes it more likely a child will taste it in the future.

Convincing parents not to give up on introducing new foods just because a child initially rejects an ingredient is another issue on which Fernando and her team work.

“Just like you wouldn’t give up on your child for reading or math — you don’t say, ‘Oh, he can’t add. We’re done, we’re not going to add anymore.’ [Food] is teaching; it’s learning,” Cannon said.

“I thought, if I really want to teach my patients how to eat better, I need to have a kitchen.”

Fernando’s preschool curriculum, which is now in more than 20 Fredericksburg-area preschools and Head Start programs, reaches more than 600 kids a year. Grant funding and donations make it free for most schools to use. Cooking classes out of Fernando’s practice are offered to patients and the general public, and range from free to $45 an hour.

In recent years, the nonprofit has expanded its website to include a “meal maker machine,” a menu planner and hundreds of recipes for all occasions. The small staff also takes a food truck out into the community to sample new recipes and spread the word about the perks of healthy eating.

Working with 3- and 4-year-olds on the benefits of broccoli might seem premature, but Fernando says establishing healthy habits at a young age has never been more important.

“Chronic illness really starts much earlier than we think,” Fernando said. “In America, if you look at a 10-year-old’s arteries, they’ve already developed fatty streaks in their arteries. So when we’re talking about the diet of a 10-year-old, we’re actually talking about reversing a disease that may already be there. So the earlier you can start, the better.” 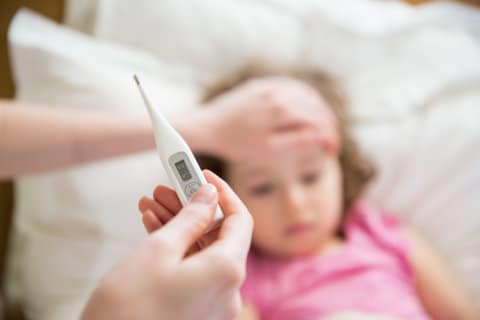