With an assist from Steph Curry, Howard U. launches Division I golf

Thanks to an idea from one of its students and a seven-figure gift from NBA superstar Stephen Curry, Howard University will field Division I golf teams for the first time.
Listen now to WTOP News WTOP.com | Alexa | Google Home | WTOP App | 103.5 FM 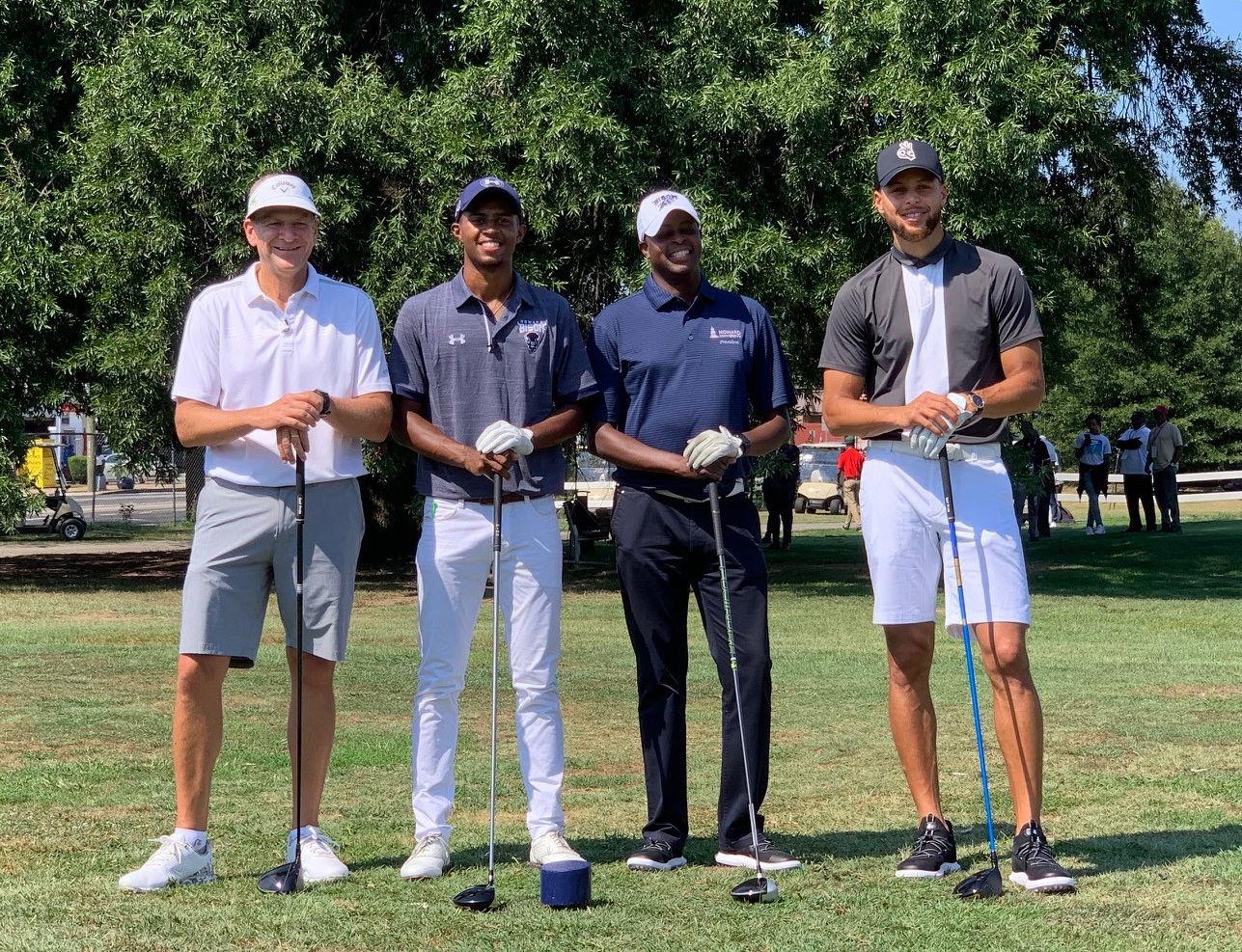 Stephen Curry hasn’t gotten to where he’s gotten in life — a six-time All-Star, three-time NBA champion, two-time MVP — by being afraid to shoot his shot. Maybe that’s why, when Howard University senior Otis Ferguson IV did the same, it resonated with Curry.

So began an unlikely partnership that, seven months later, came to fruition with the announcement that Howard University would sponsor men’s and women’s Division I golf for the first time, thanks to a seven-figure donation from Curry to get the program off the ground.

The announcement was made Monday morning at Langston Golf Course in Southeast D.C., which was constructed as the Black golf course in D.C. back when African-Americans were banned from East Potomac. It served as a fitting backdrop for historic announcement, which will restore golf to the HBCU for the first time since a Division II program that ran from the late ‘50s to mid-‘70s.

“What began as a random conversation between two young people passionate about the game of golf has ended up here, the announcement of one of the most generous gifts in the history of Howard University,” said Howard Athletic Director Kerry Davis.

Ferguson, then a junior, approached Curry on campus at Howard after a film screening he attended in January. In a crowd of people asking questions of the NBA star, Ferguson, who had started a golfing club on campus, asked Curry whether he’d like to play a round.

That got the two speaking about the sport. After a number of emails behind the scenes, Curry worked out the details with the university. But he gave all the credit Monday to Ferguson and how inspired he was by the Howard community.

The scholarships will begin next year, with the aim of fielding a team for the 2021 school year. There will be two women’s scholarships and at least one men’s scholarship the first year. The hope is that Ferguson will be able to get a graduate waiver from the NCAA to participate as well, actually getting to enjoy some of the fruits of his labor.

For now, he’s just overwhelmed to see his dream become a reality.

“This is an amazing opportunity, an amazing moment, just to have a lot of the people who are close to me here to see it,” he said.

As part of the scholarship, students are expected to volunteer for programs with similar missions to Curry’s Eat. Learn. Play. charity in Northern California.

“It kind of goes full range into developing the total person. From an athletics perspective, from an educational perspective, from a philanthropic perspective. I’m extremely happy to bring part of what makes me who I am, my family as well, to that program,” said Curry.

Callaway will be providing equipment as part of the partnership. While they had no official preexisting relationship with Curry, he had used some of their equipment in the past, and CEO Chip Brewer, once a college golfer himself, saw the opportunity to work together.

Brewer joined Curry, Ferguson and Howard University President Wayne A.I. Frederick for a round of golf after the event. Frederick was effusive in his praise of Curry and his gift to the university

“We are at a very interesting time in our country, in our nation’s history, there’s no doubt about that. There’s a lot for us to be cynical about, a lot for us to be disappointed by, especially in terms of the rhetoric. But one of the things that I think we must all make sure that we double down on is investing in the people who invest in us,” said Frederick.

“And one of the things that we have to take pause today, amongst everything else that is happening, is to realize that Mr. Curry represents what is great about America. If you want to talk about American greatness and you want to talk about what Americans should be doing, regardless of their station in life, I think you just need to look at what Mr. Curry has been doing, off the court. I’m not even talking about on the court.”