Weather service to investigate if tornado touched down in Md. where man died

Monday’s storms brought down the temperatures, but not before triggering a string of weather advisories, including two tornado warnings in Maryland.

One severe thunderstorm was so strong that the National Weather Service will head out Tuesday to find out whether a tornado may have touched down in Finksburg, Maryland. The storm brought down a tree that killed an 89-year-old man standing in his driveway.

The victim has been identified by the Carroll County Sheriff’s Office as Harry Swan. Since nobody observed the incident, his body was transported to the Medical Examiner’s Office in Baltimore for further investigation.

The sheriff’s office said Swan was trapped underneath the tree. When emergency crews arrived and moved the tree, they were unable to save him. He was pronounced dead at the scene.

In a second round of storms Monday night, D.C. Fire and EMS were at the scene of a fire caused by a downed power line.

Throughout the region there were reports of downed trees blocking several roads in Loudoun County, Virginia, D.C., and in Montgomery and Howard counties in Maryland. WTOP’s Dave Dildine photographed a number of trees downed in Northwest D.C. 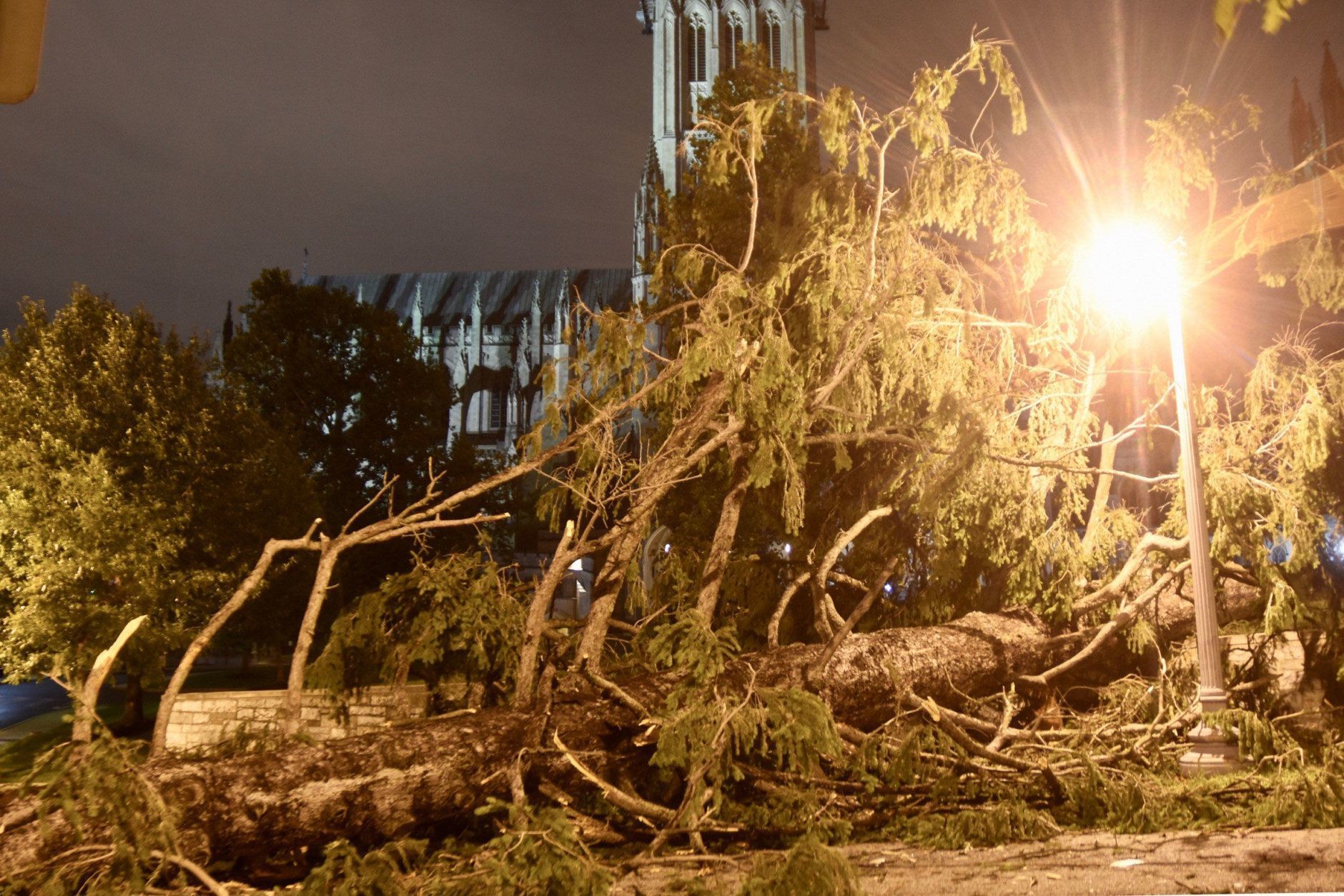 1/6
This tree came down on Woodley Road near the National Cathedral in Northwest D.C. 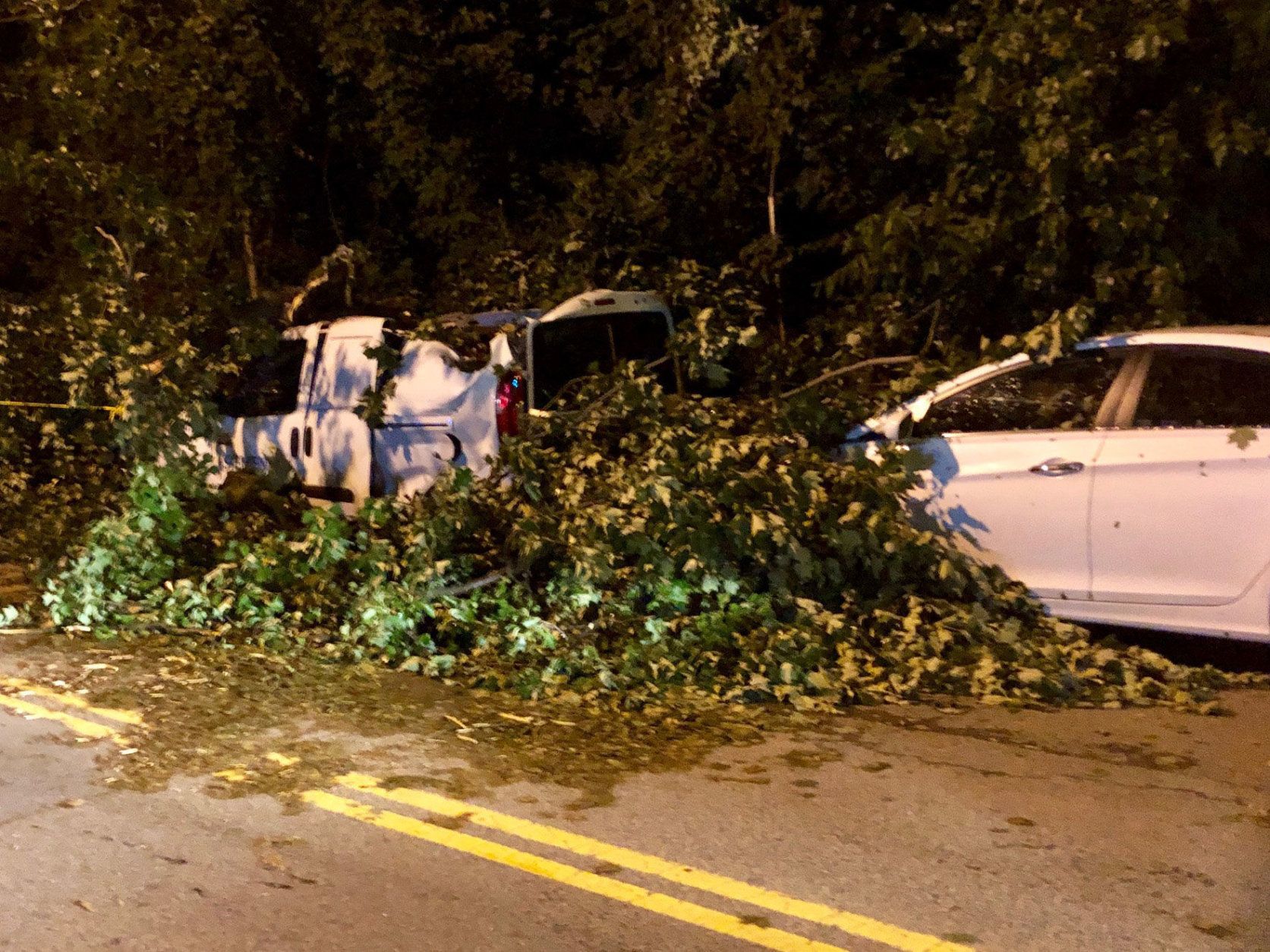 2/6
In Northwest D.C. a number of cars suffered damage as high winds brought down trees. 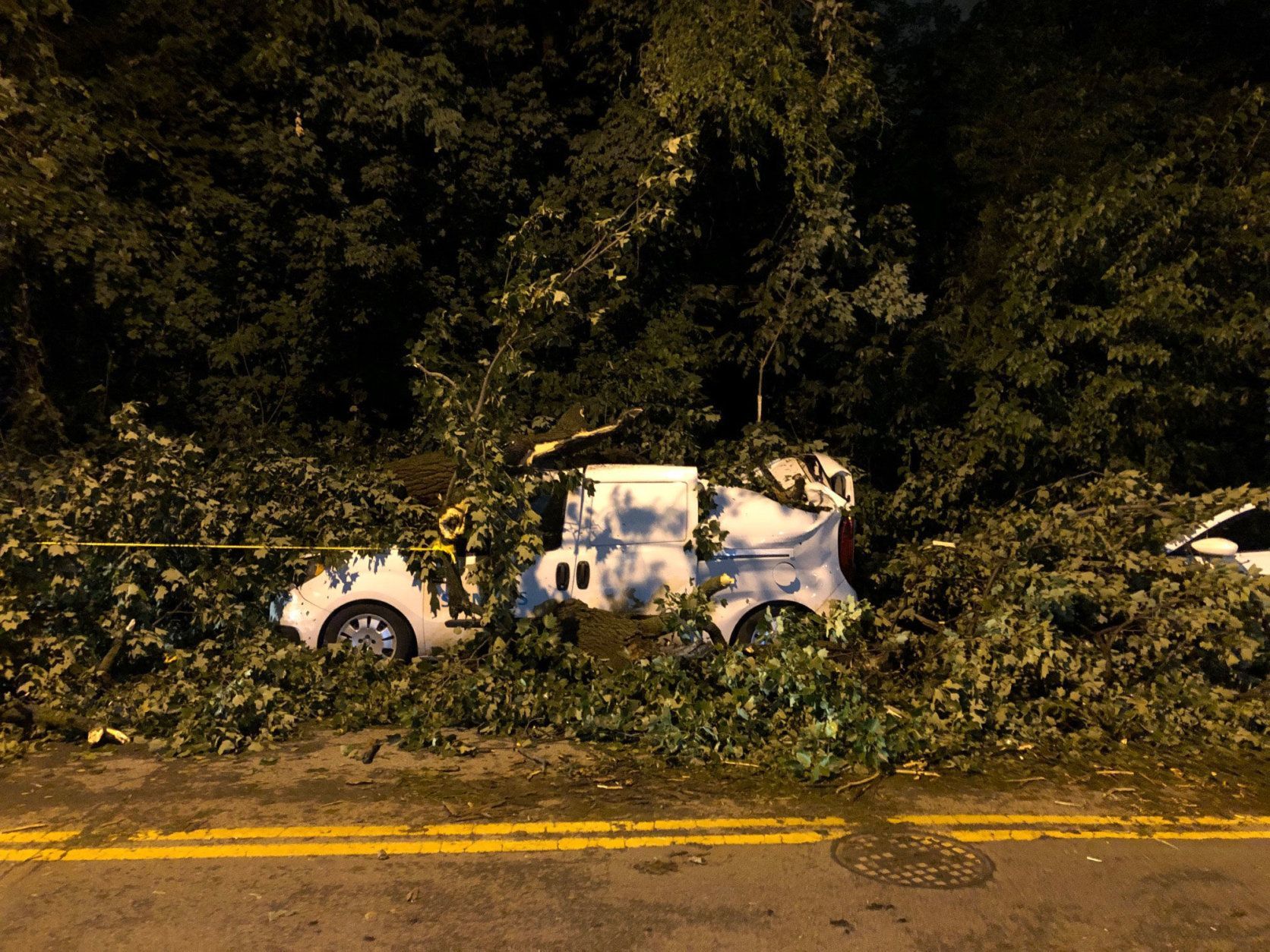 3/6
One van suffered damage from a downed Tulip Poplar tree. 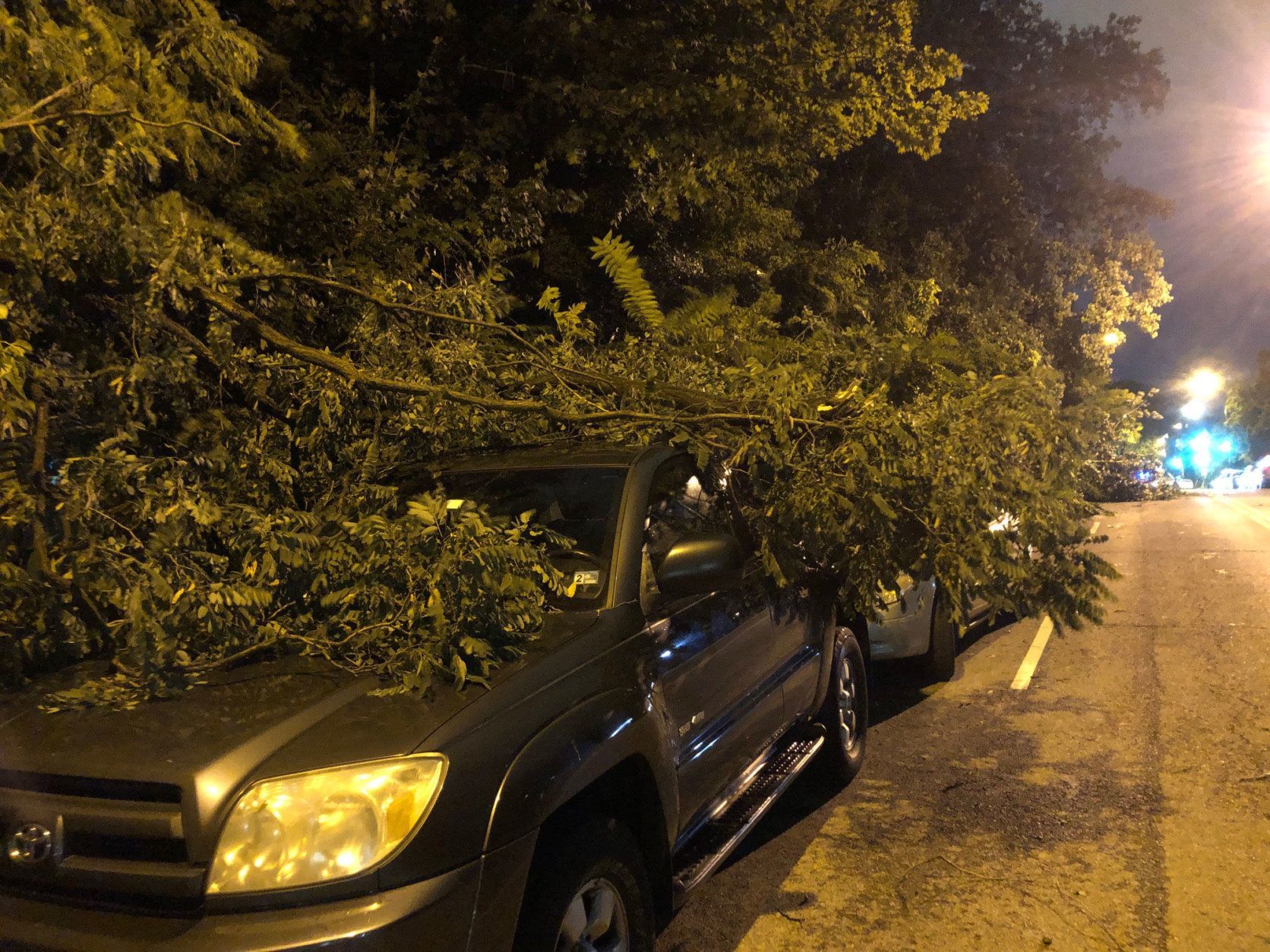 4/6
A Toyota pickup truck parked on Reservoir Road in Georgetown suffered some damage from a downed black locust. 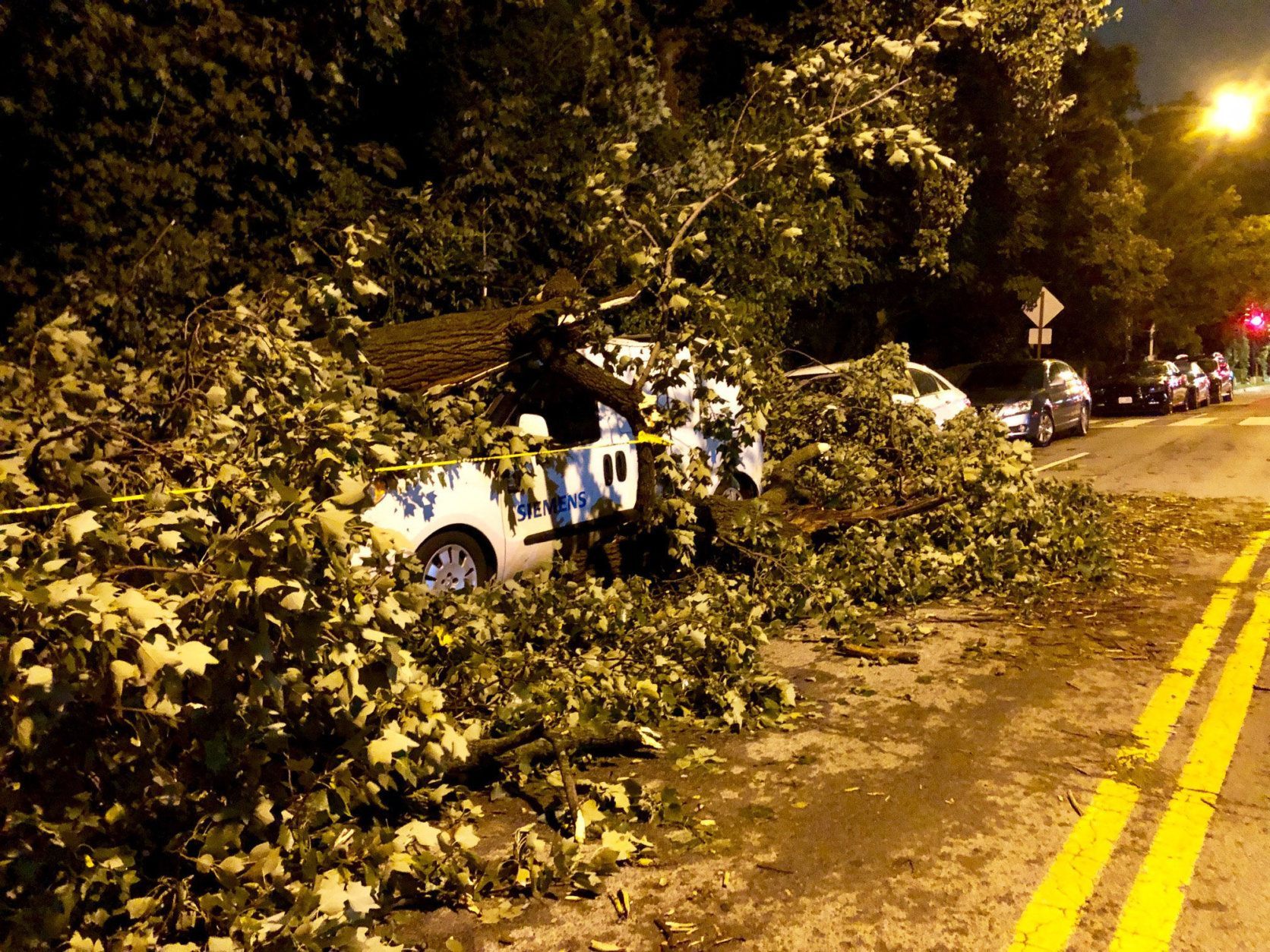 5/6
More than one vehicle in Northwest D.C. will have trouble getting back on the road Tuesday morning.
WTOP’s Dave Dildine was photographed by another photographer who was out taking photos of storm damage on Monday night. (WTOP/Dave Dildine)
6/6

I finally did it. It finally happened. I captured @DildineWTOP being awesome. If you’re not following this DC icon, you’re missing out. pic.twitter.com/FMe06Pva44