The Redskins and Ravens aren’t playing in Super Bowl LIV but the game will feature plenty of coaches and players with personal and professional ties to the D.C. area.

49ers head coach Kyle Shanahan is perhaps the best-known qualifier for this list, given how badly his time as Redskins offensive coordinator ended. So with Shanahan understood, let’s spotlight some players and coaches for both the 49ers and Kansas City Chiefs that might move you toward a rooting interest for Super Bowl Sunday. 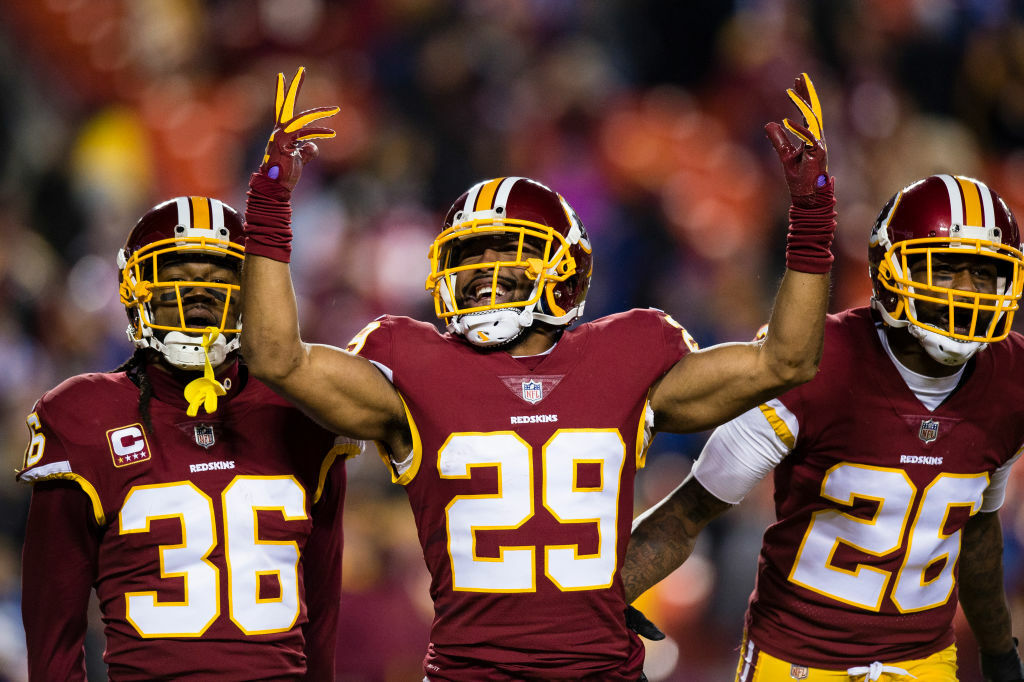 Chiefs cornerback Kendall Fuller not only played for the Redskins, but he was a standout in football and track at Our Lady of Good Counsel in Olney, Maryland. The Baltimore-native will be an unrestricted free agent in March, so maybe he gets a Super Bowl ring before a return home to the Redskins or Ravens? 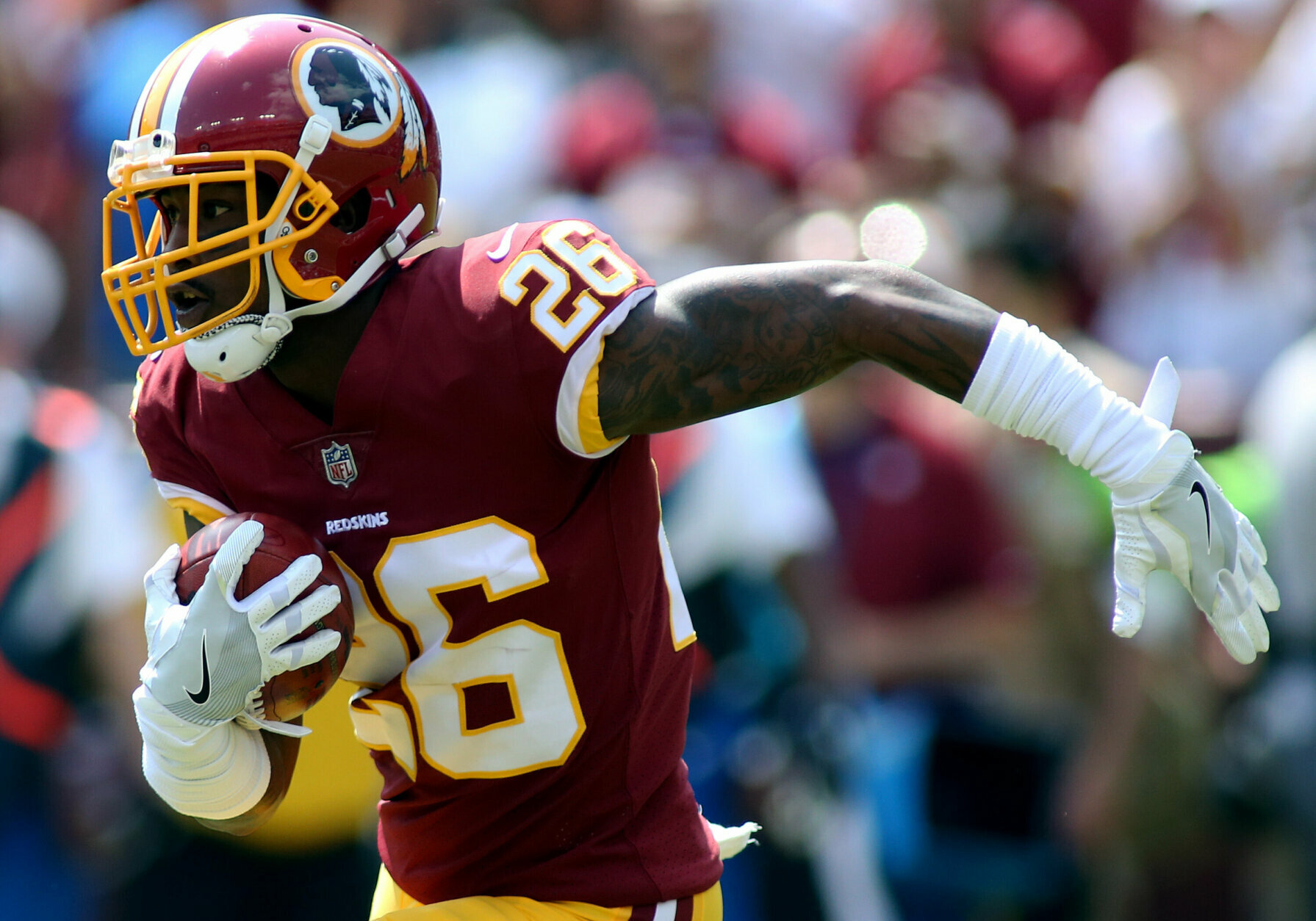 Chiefs cornerback Bashaud Breeland was drafted by the Redskins in the fourth round of the 2014 draft and spent his first four NFL seasons in Burgundy and Gold before leaving in free agency. Like Fuller, Breeland will be an unrestricted free agent in March. 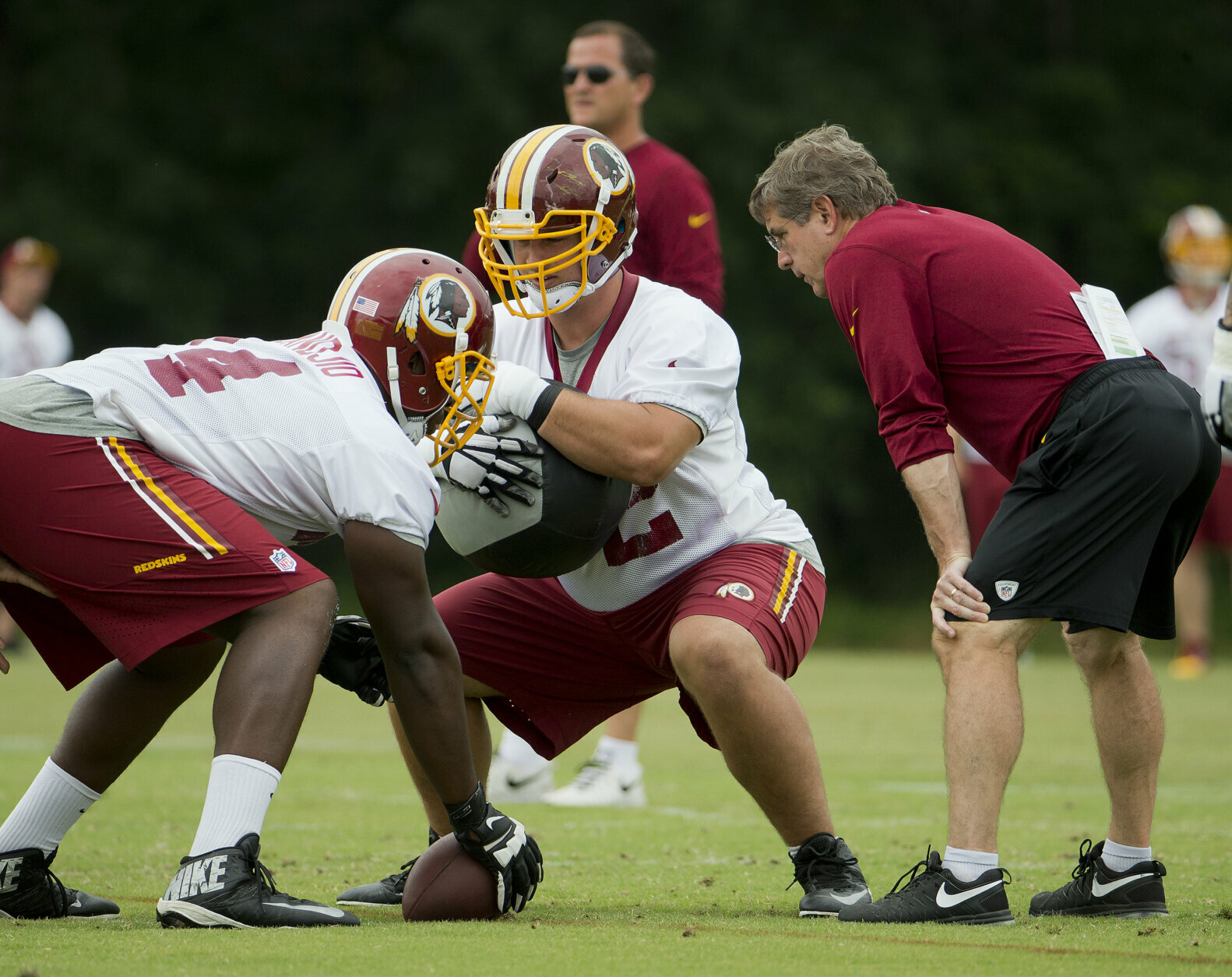 Chiefs center Austin Reiter was selected by the Redskins in the seventh round of the 2015 draft, and signed off the practice squad by the Cleveland Browns in 2016. Since joining the Chiefs in 2018, he’s started 20 out 27 games played, including all 16 games this season. Reiter also happens to be coached by a former Redskins offensive lineman … 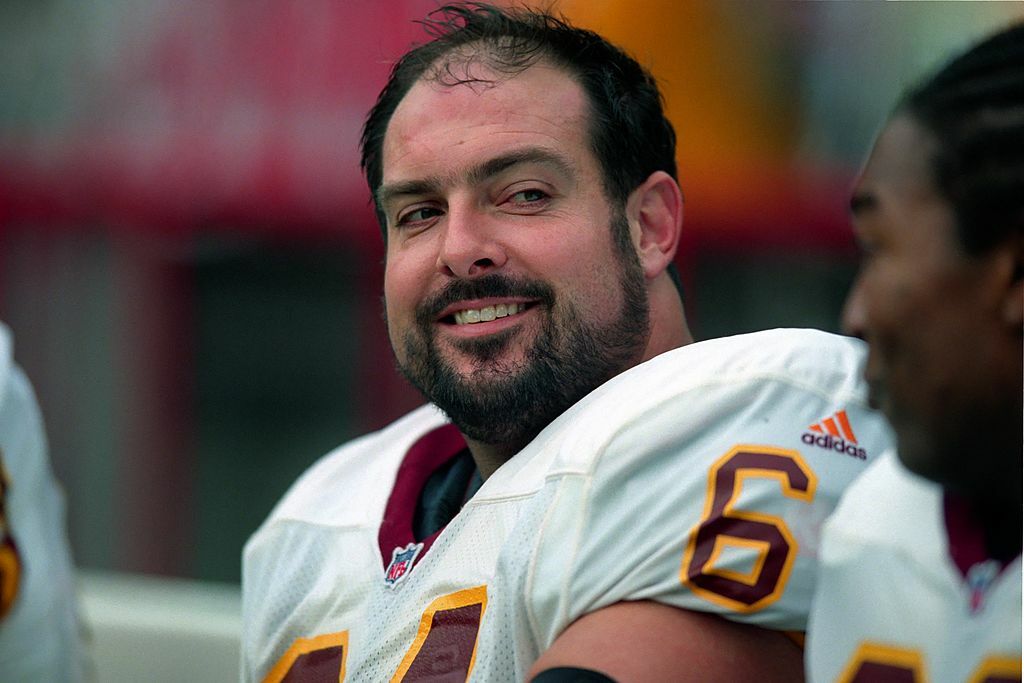 4/14
PITTSBURGH – DECEMBER 16: Offensive lineman Andy Heck #64 of the Washington Redskins looks on from the sideline during a game against the Pittsburgh Steelers at Three Rivers Stadium on December 16, 2000 in Pittsburgh, Pennsylvania. (Getty Images/George Gojkovich) 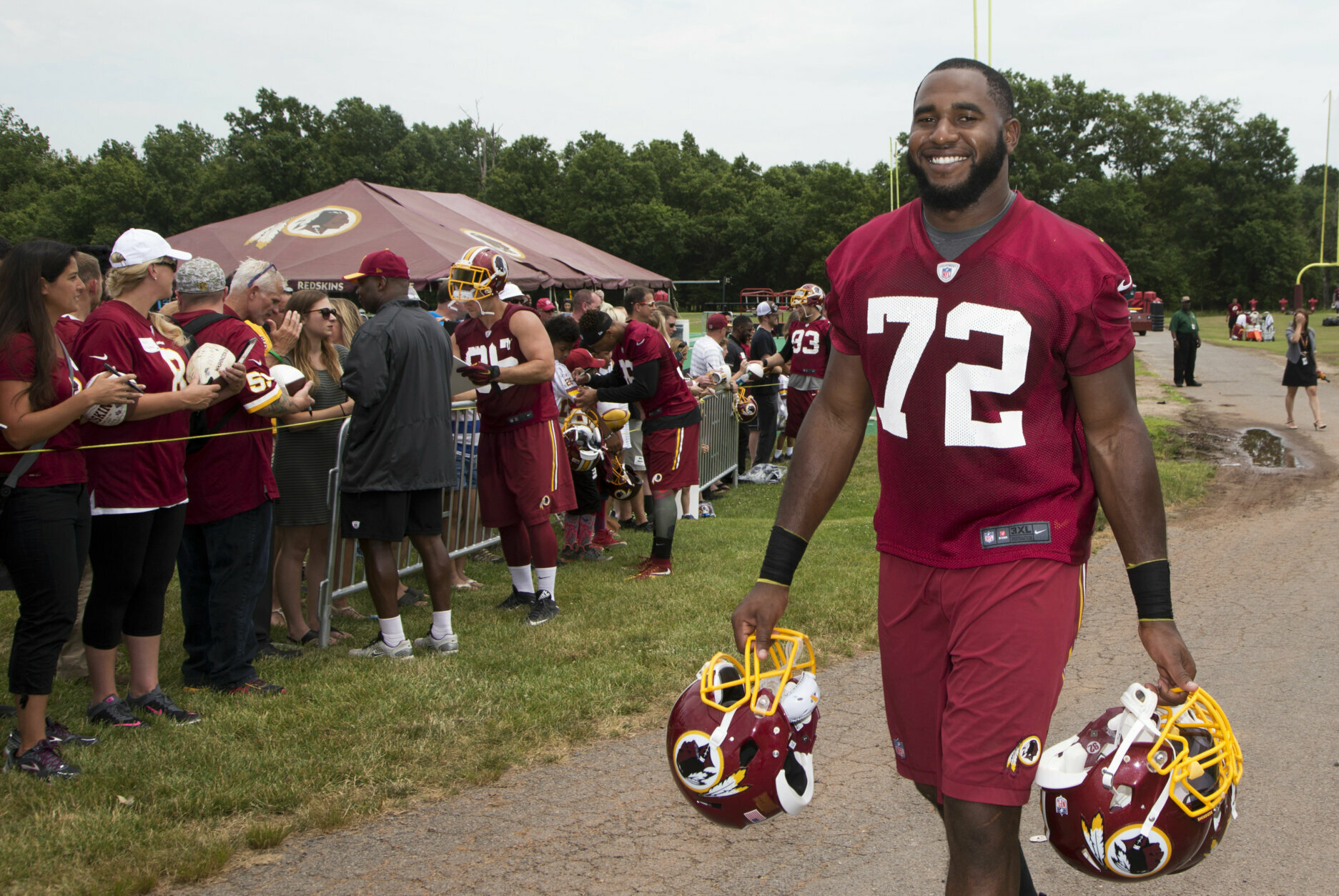 Anthony Lanier II made the Redskins’ 53-man roster as an undrafted rookie in 2016 and was a feel good story for the team until he was waived/injured early in the 2018 season. After spending 2019 on the Chargers’ practice squad, the Chiefs signed him to a futures contract three weeks ago. 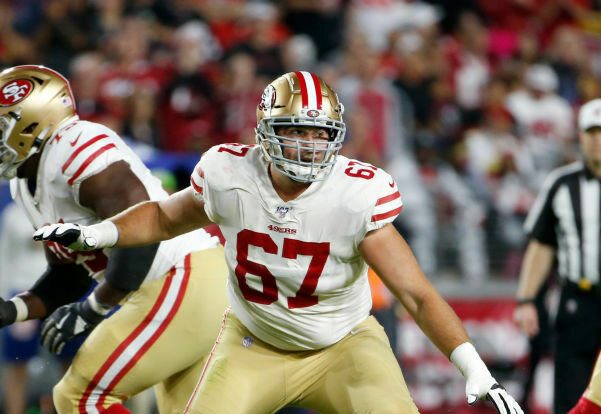 6/14
GLENDALE, ARIZONA – OCTOBER 31: Offensive lineman Justin Skule #67 of the San Francisco 49ers pass protects during the first half of the NFL football game against the Arizona Cardinals at State Farm Stadium on October 31, 2019 in Glendale, Arizona. (Getty Images/Ralph Freso)

49ers offensive tackle Justin Skule was drafted in Round 6 of the 2019 NFL Draft. The Centreville High School graduate started eight games in his rookie season and played 51% of the team’s snaps in 15 regular season games. (Read more on him here.) 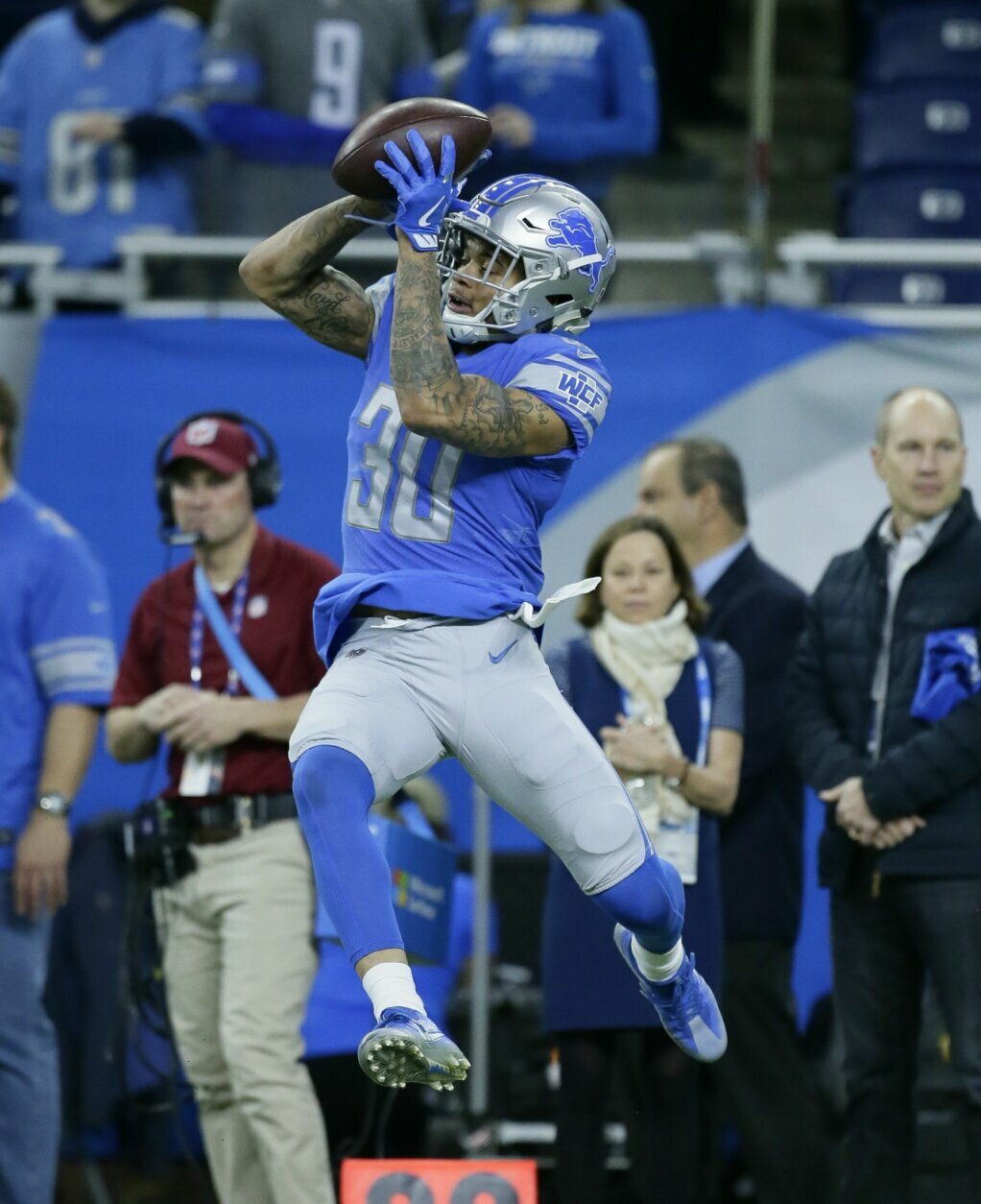 D.C.-native Teez Tabor was signed to the 49ers’ practice squad in October. The Friendship Collegiate Academy graduate and 2017 second-round pick played 22 games in two seasons with the Detroit Lions before being released in September. 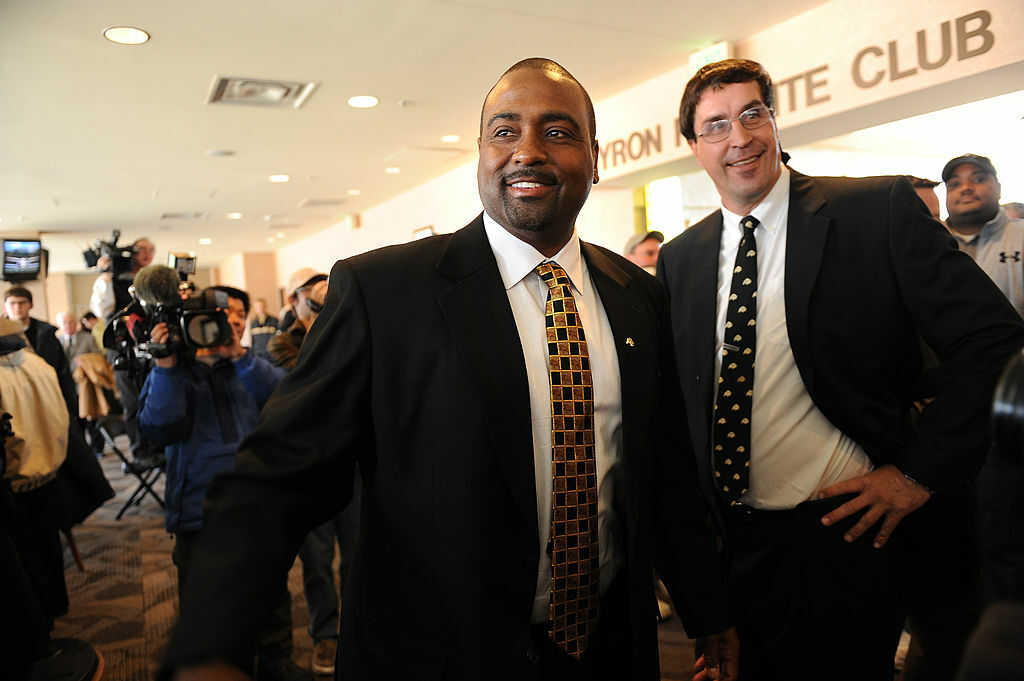 8/14
New head coach Jon Embree gets ready to meet the press at the Byron R. White Club room at Folsom Stadium in 2010. At right is former CU player Ed Reinhardt. The two of them were roommates and the two played together in the mid 1980’s before Reinhardt suffered a career ending and life changing brain injury in a game the put him into a coma for months afterwards. The University of Colorado at Boulder formally introduced Jon Embree as their new head coach for the CU Buffs football team. Embree, who was a tight end for CU in the mid-1980’s and a one-time assistant coach for the school, was selected by athletic director Mike Bohn to be the Buffaloes’ next head coach. Embree, 45, becomes the 24th full-time coach in school’s history and the first African-American named to the position. He had been in his first year under former Denver Bronco head coach Mike Shanahan as an assistant coach with the Washington Redskins and previous to that 3 years in a similar position with the Kansas City Chiefs. (Denver Post via Getty Images/Helen H. Richardson)

49ers tight ends coach Jon Embree held that same position here in Washington in 2010 before taking the head coaching job at Colorado. Embree’s sons will coach on either end of Super Bowl LIV; Taylor is an offensive quality control coach for the 49ers and Connor is a defensive assistant for the Chiefs. 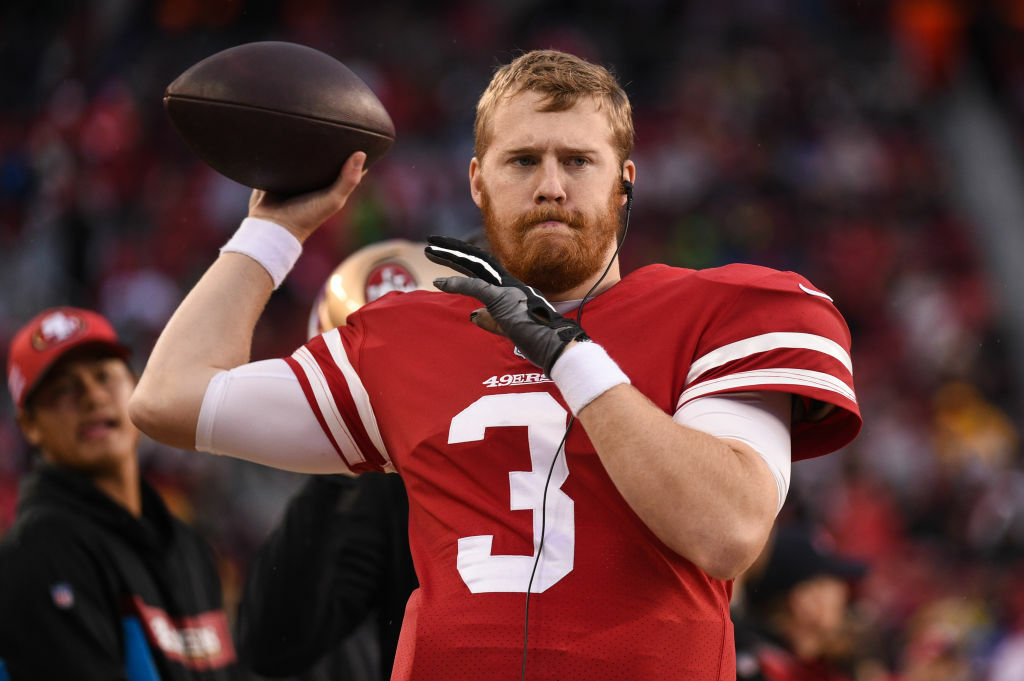 Though he didn’t play or live in the D.C. area, 49ers backup quarterback C.J. Beathard is the grandson of Redskins Hall of Fame general manager Bobby Beathard and would love to end a season of tragedy on a high note. 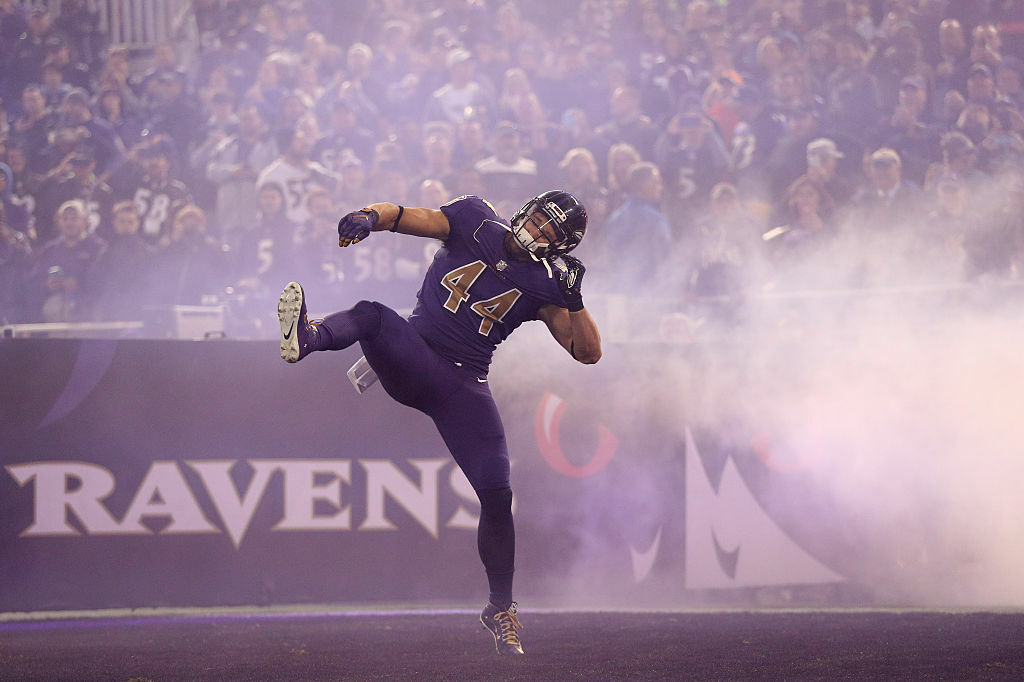 10/14
BALTIMORE, MD – NOVEMBER 10: Fullback Kyle Juszczyk #44 of the Baltimore Ravens is introduced prior to a game against the Cleveland Browns at M&T Bank Stadium on November 10, 2016 in Baltimore, Maryland. (Getty Images/Patrick Smith)

49ers fullback Kyle Juszczyk was selected by the Ravens in the fourth round of the 2013 draft and played his first four seasons in Baltimore. Though tough to pronounce, Juszczyk (YOUs-check) has made a name for himself as a utility player, making four straight Pro Bowls. 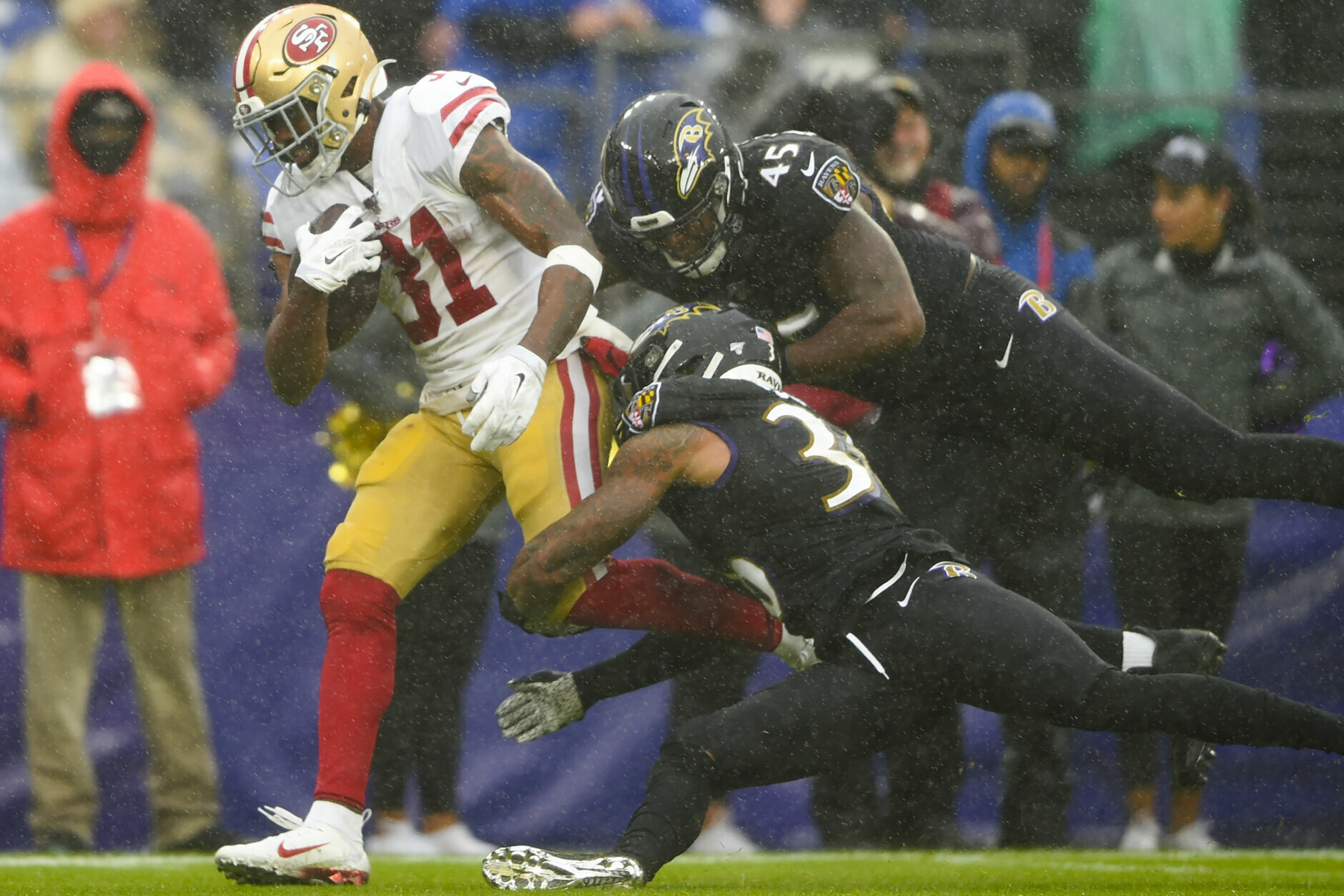 Before he ran wild against the Ravens in December, 49ers running back Raheem Mostert played seven games for the Ravens in 2015. But when Baltimore tried to release him to the practice squad, the Cleveland Browns signed him to their 53-man roster. Regardless of rooting interests, Mostert — who is on his seventh NFL roster — is an underdog story people can rally around. 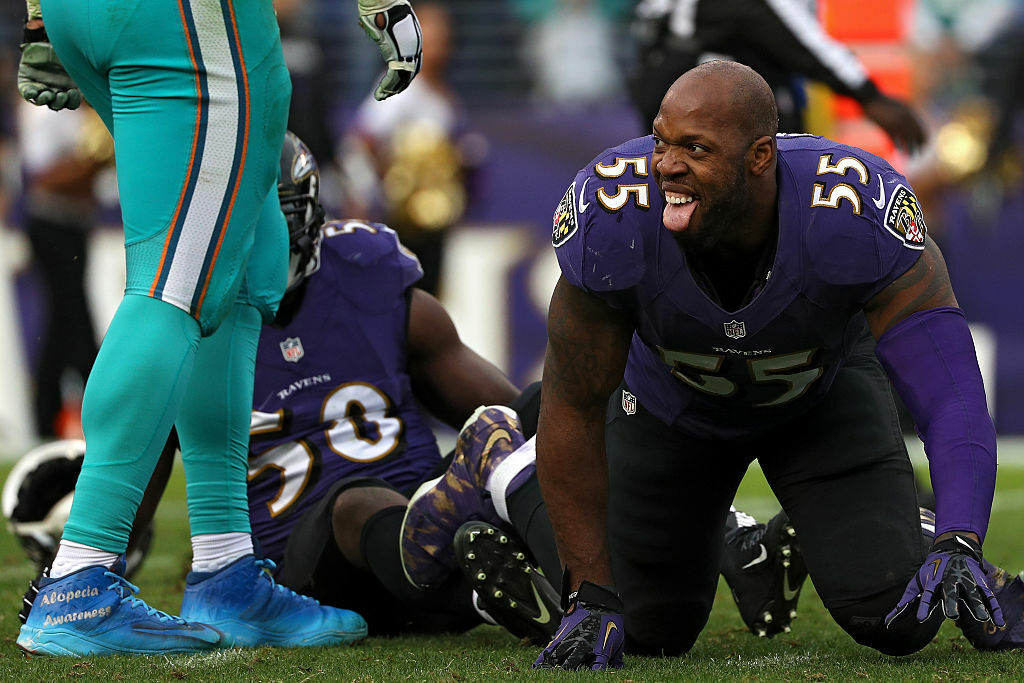 12/14
BALTIMORE, MD – DECEMBER 04: Outside linebacker Terrell Suggs #55 of the Baltimore Ravens reacts after hitting quarterback Ryan Tannehill #17 of the Miami Dolphins (not pictured) in the third quarter at M&T Bank Stadium on December 4, 2016 in Baltimore, Maryland. (Getty Images/Patrick Smith)

I mean, do I really need to remind you that T-Sizzle used to rule Baltimore? Chiefs defensive end Terrell Suggs had a 16-year, Hall of Fame-caliber career in Baltimore before virtually retiring to his hometown team in Arizona. The Cardinals opted to move on from the 37-year-old pass rusher sooner rather than later, giving Suggs the chance to catch on with a contender in the final month of what feels like his final season. If Baltimore can’t root for the Ravens in the Super Bowl, they might as well pull for a man who will represent them in Canton. 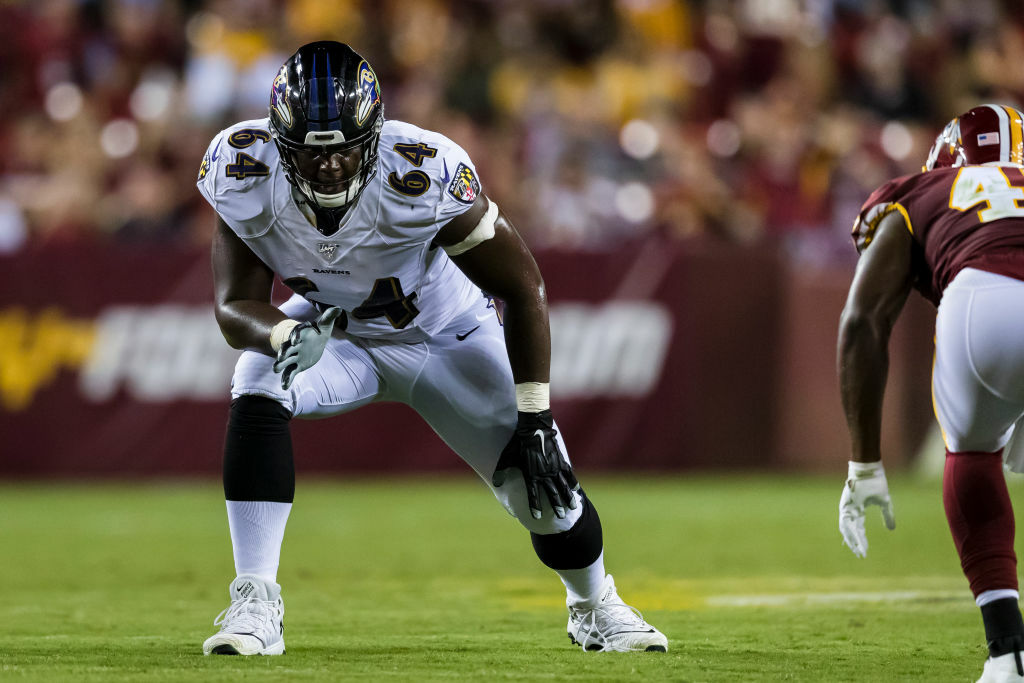 13/14
LANDOVER, MD – AUGUST 29: Greg Senat #64 of the Baltimore Ravens looks to block against the Washington Redskins during the first half of a preseason game at FedExField on August 29, 2019 in Landover, Maryland. (Getty Images/Scott Taetsch)

Chiefs offensive tackle Greg Senat was a sixth-round pick by the Baltimore Ravens in 2018, but has been placed on injured reserve in each of his first two NFL seasons and has yet to play a regular season snap. 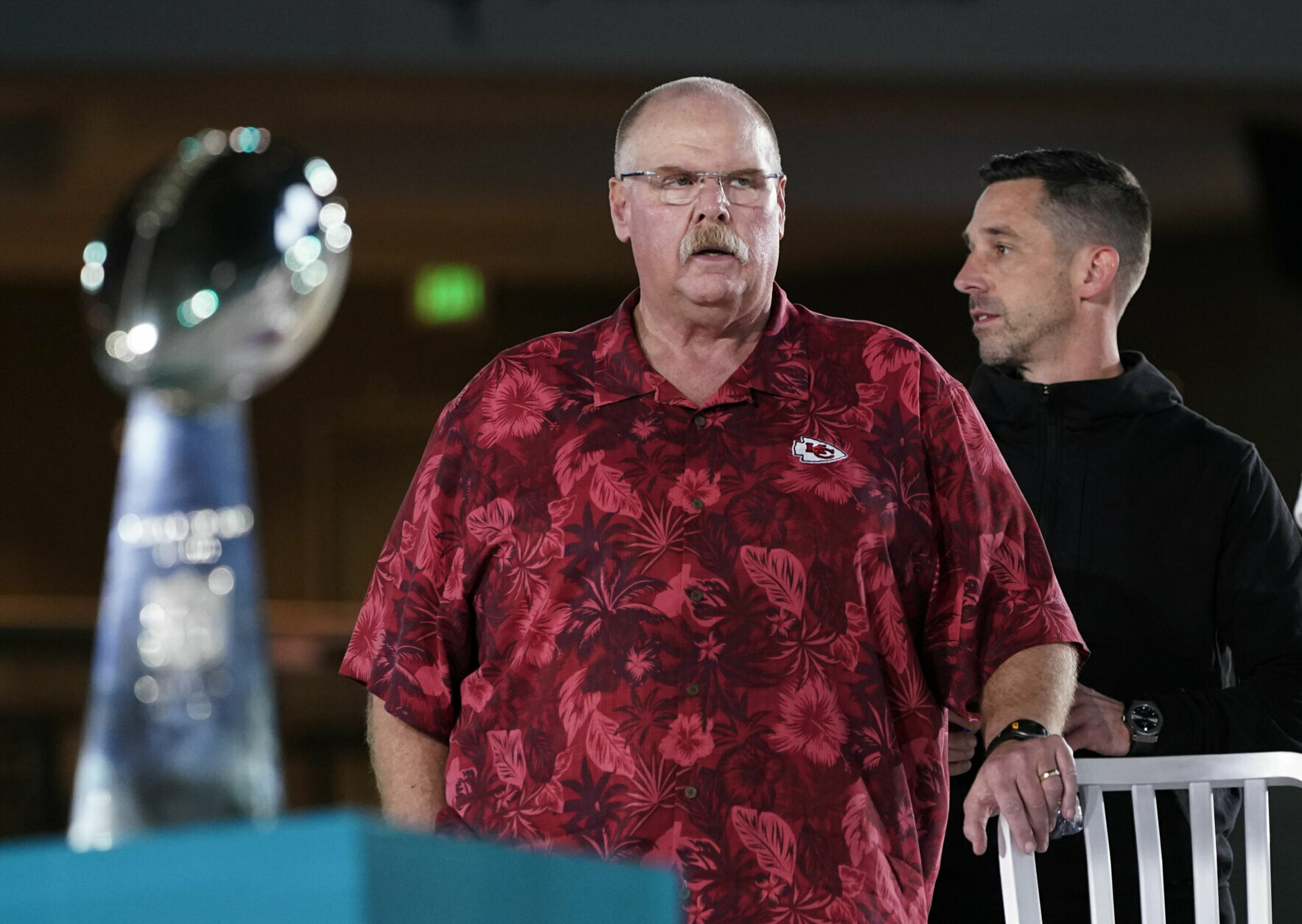 I know Chiefs head coach Andy Reid isn’t a local — and is, in fact, a former Eagles coach that tormented the Redskins for over a decade — but in 21 seasons, he’s the sixth-winningest coach in NFL history with zero championships in only one previous Super Bowl appearance. Like beloved veteran coaches Tony Dungy and Bill Cowher before him, let Andy have his long-awaited day in the sun.

NFL VP reaches out to prospects about draft participation