The NFL Week 10 Recap is full of ridiculous runs, ill-gotten gains and a crying shame. 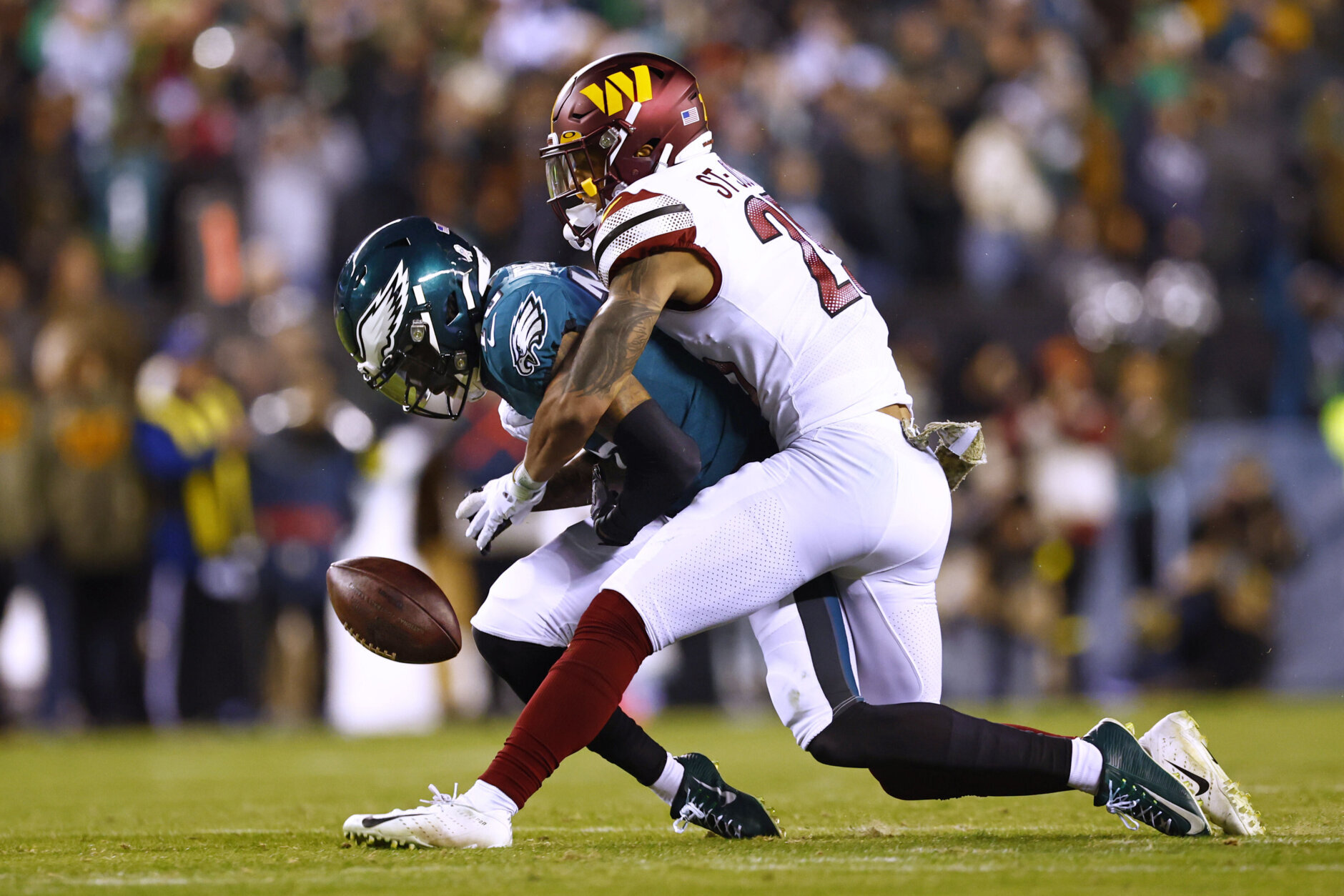 Look, I’m not going to say I called Washington’s upset win in Philly (after all, I picked against them right before kickoff) but I will say I laid out the exact blueprint for a Commanders win in last week’s D.C. Sports Huddle. Apparently, Ron Rivera was listening — and because of it, he joins Don Coryell as the only coaches in the Super Bowl era with multiple wins against teams 8-0 or better.

So listen to me again, Ron. Given what’s happening in Las Vegas, make Derek Carr a Washington Commander in 2023. You can thank me later. 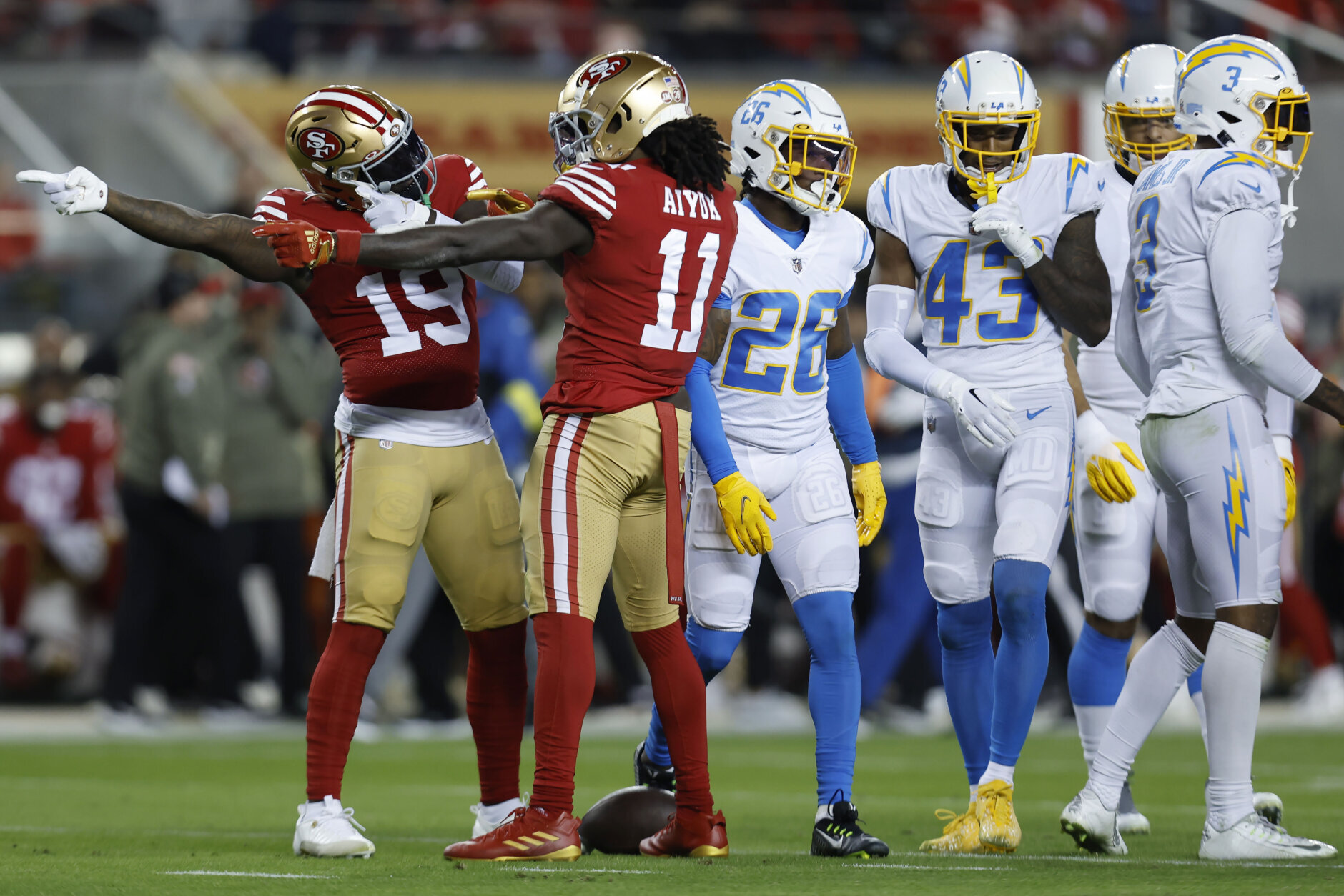 On a banner night for the Bosa family, the Niners got their season pointed in the right direction by outrushing the Chargers 156-51 and pulling within a half-game of Seattle for the NFC West lead. San Fran has a chance to pull away in the division if they can take advantage of this stretch of five straight home games (yes, I’m counting next week’s game in Mexico City as a “home” game). 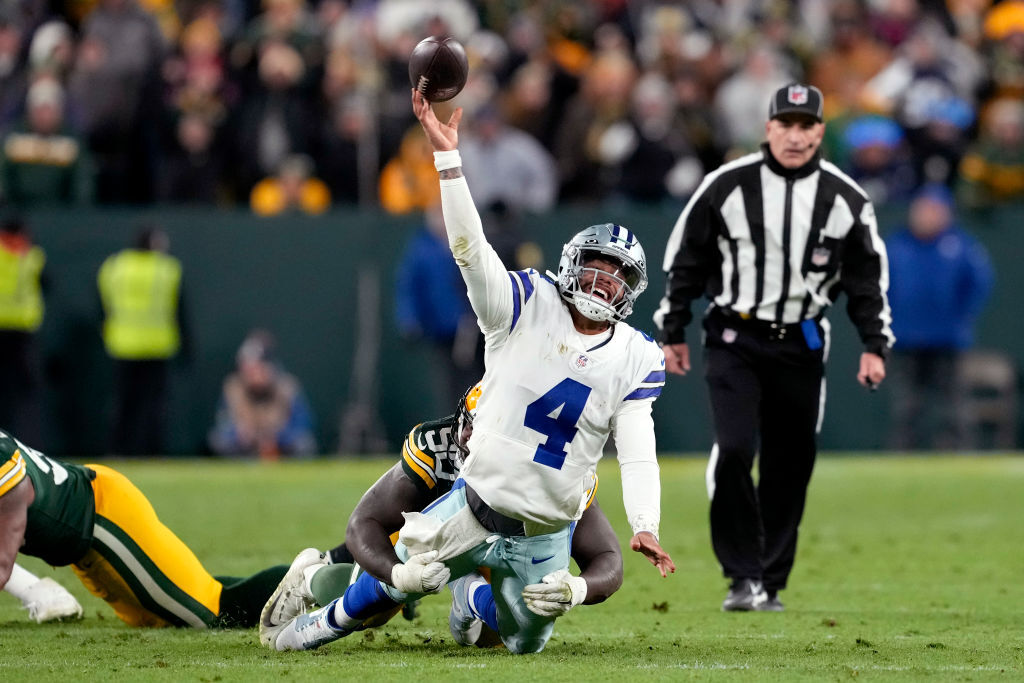 3/14
GREEN BAY, WISCONSIN – NOVEMBER 13: Dak Prescott #4 of the Dallas Cowboys attempts a pass while being tackled by Jarran Reed #90 of the Green Bay Packers during overtime at Lambeau Field on November 13, 2022 in Green Bay, Wisconsin. (Photo by Patrick McDermott/Getty Images)

Mike McCarthy’s return to Green Bay ended up being further evidence of why he’s not the coach of the Packers anymore. His late-game decisions are the undoing of every team he coaches — and I hope he never leaves Dallas. 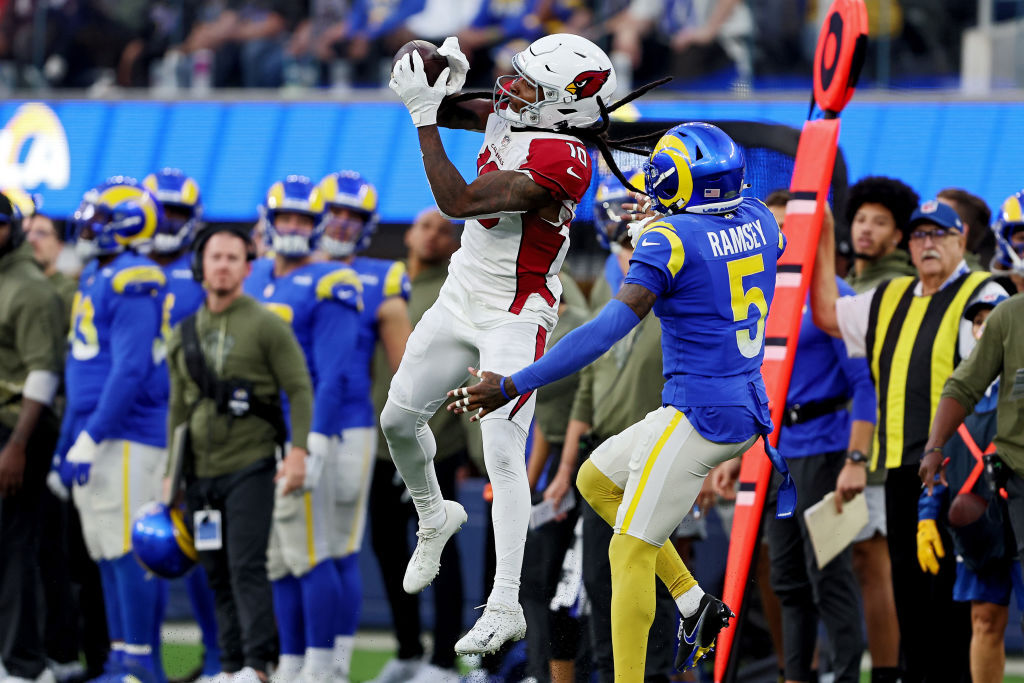 4/14
INGLEWOOD, CALIFORNIA – NOVEMBER 13: DeAndre Hopkins #10 of the Arizona Cardinals catches a pass against Jalen Ramsey #5 of the Los Angeles Rams in the third quarter of the game at SoFi Stadium on November 13, 2022 in Inglewood, California. (Photo by Sean M. Haffey/Getty Images)

As Washington fans know well, Colt McCoy is as gutsy a quarterback as there is in the NFL. But this is about DeAndre Hopkins, who has double-digit catches in three of his four games this season for a Cardinals squad that’s 10-4 since the start of last season when he plays. Can a receiver win MVP if he misses the first six games but Arizona makes the playoffs? 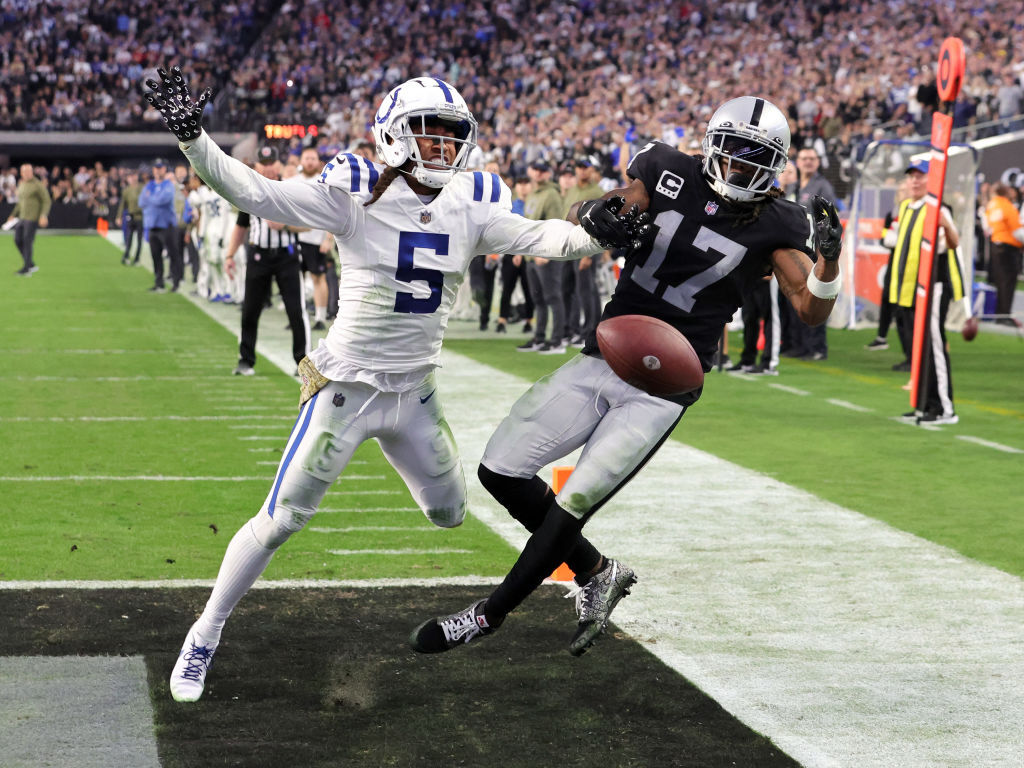 5/14
LAS VEGAS, NEVADA – NOVEMBER 13: Cornerback Stephon Gilmore #5 of the Indianapolis Colts breaks up a pass intended for wide receiver Davante Adams #17 of the Las Vegas Raiders in the end zone late in the fourth quarter of their game at Allegiant Stadium on November 13, 2022 in Las Vegas, Nevada. The Colts defeated the Raiders 25-20. (Photo by Ethan Miller/Getty Images)

Don’t let this result fool you: Indianapolis hiring Jeff Saturday as its interim coach is a travesty.

And so is Las Vegas blowing this game. Given the way (and frequency with which) the Raiders have lost this season (0-6 in one-possession games and the only team to give up at least 20 points in every game this season), Derek Carr is right to be crying mad about it. He damn near said something last week and I can’t wait to hear the full story when Josh McDaniels is inevitably fired. 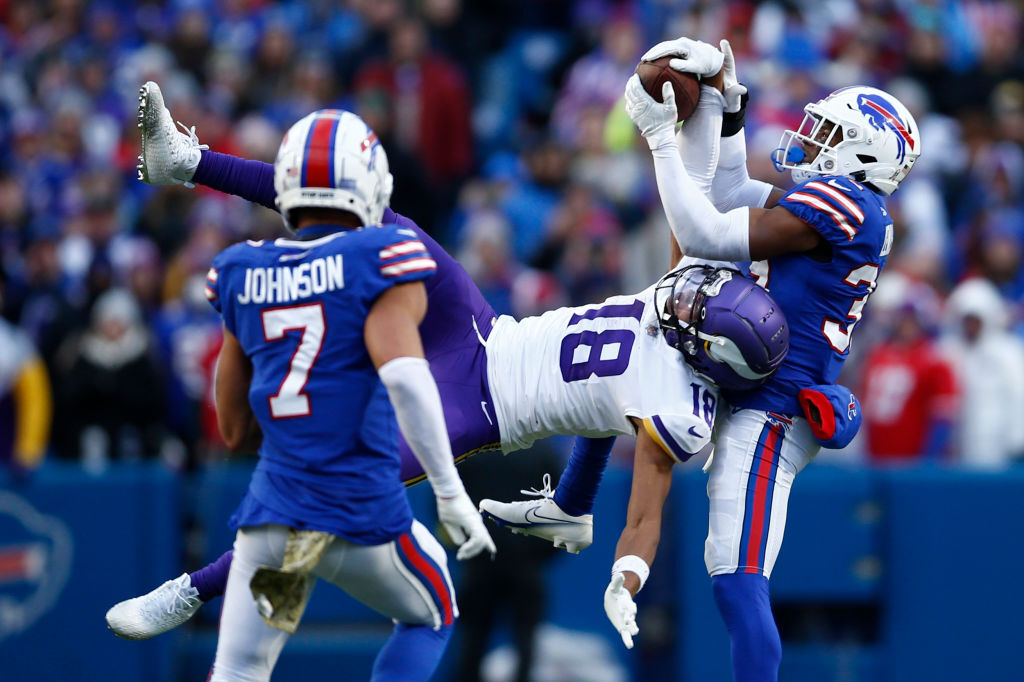 6/14
ORCHARD PARK, NEW YORK – NOVEMBER 13: Justin Jefferson #18 of the Minnesota Vikings catches a pass in front of Cam Lewis #39 of the Buffalo Bills during the fourth quarter at Highmark Stadium on November 13, 2022 in Orchard Park, New York. (Photo by Isaiah Vazquez/Getty Images)

In perhaps the best game of the 2022 NFL season, Minnesota made a statement — actually, several statements.

First off, the Vikings are for real. Going on the road and beating a Super Bowl favorite in comeback fashion shows they’re not a team just getting fat on an easy schedule (as I thought they were).

Secondly, Justin Jefferson — who is a Viking thanks to the Stefon Diggs trade — announced to the world he’s the best receiver in the league. HE CAUGHT THE BALL IN THE ABOVE PICTURE! Vikings-Eagles in the playoffs is gonna be fun assuming it doesn’t mean Kirk Cousins playing in primetime, that is. 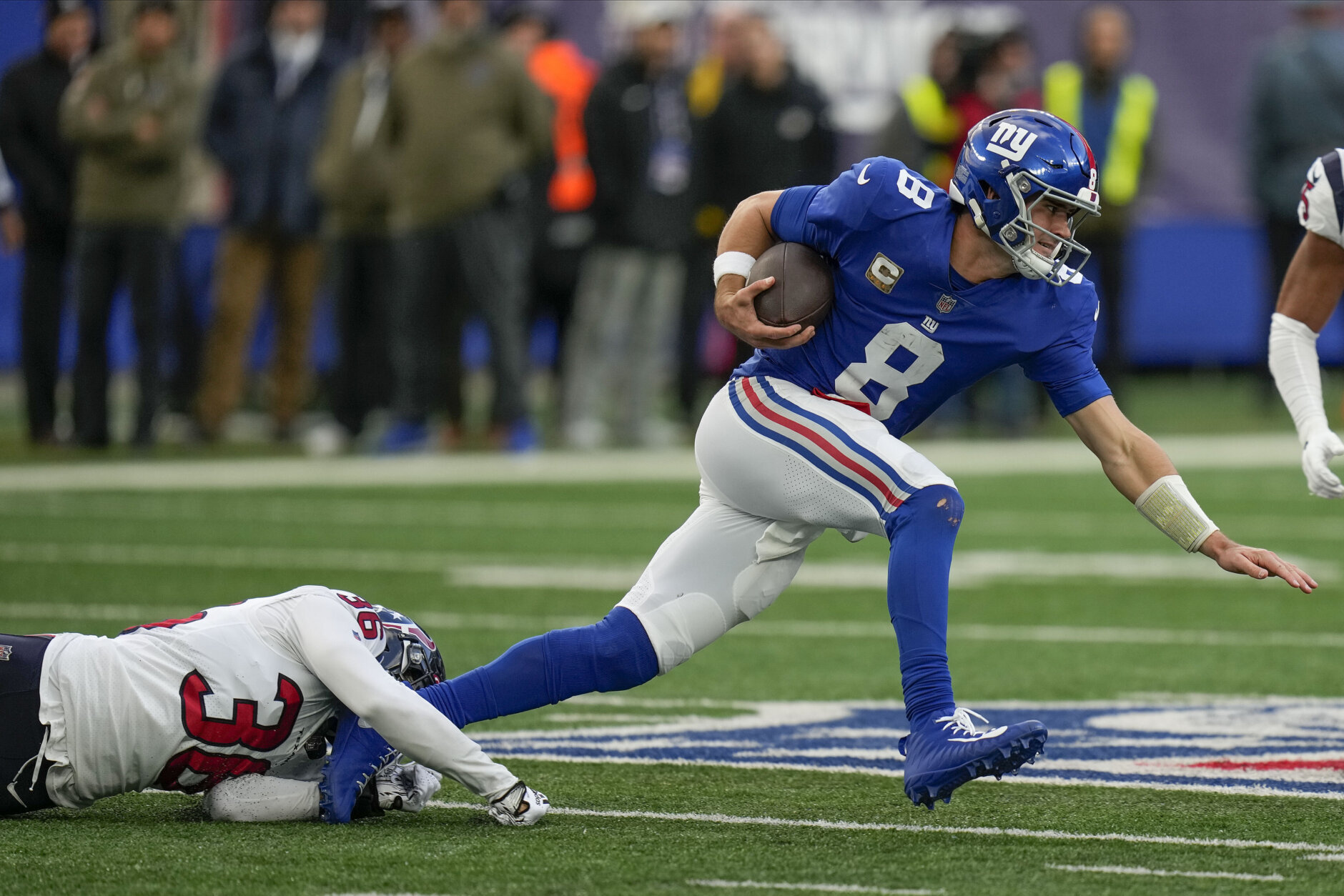 Big Blue is riding Saquon until the wheels fall off but this team is unexpectedly off to its best start since 2008 thanks to Daniel Jones’ big improvement protecting the football: Jones is the first Giants QB to go six straight starts with no interceptions since Phil Simms in the early 90s, helping New York (finally) win close games.

Conversely, Houston has a problem: The Texans are 0-6 when Davis Mills gets intercepted so the blueprint has been laid out for Washington next Sunday. 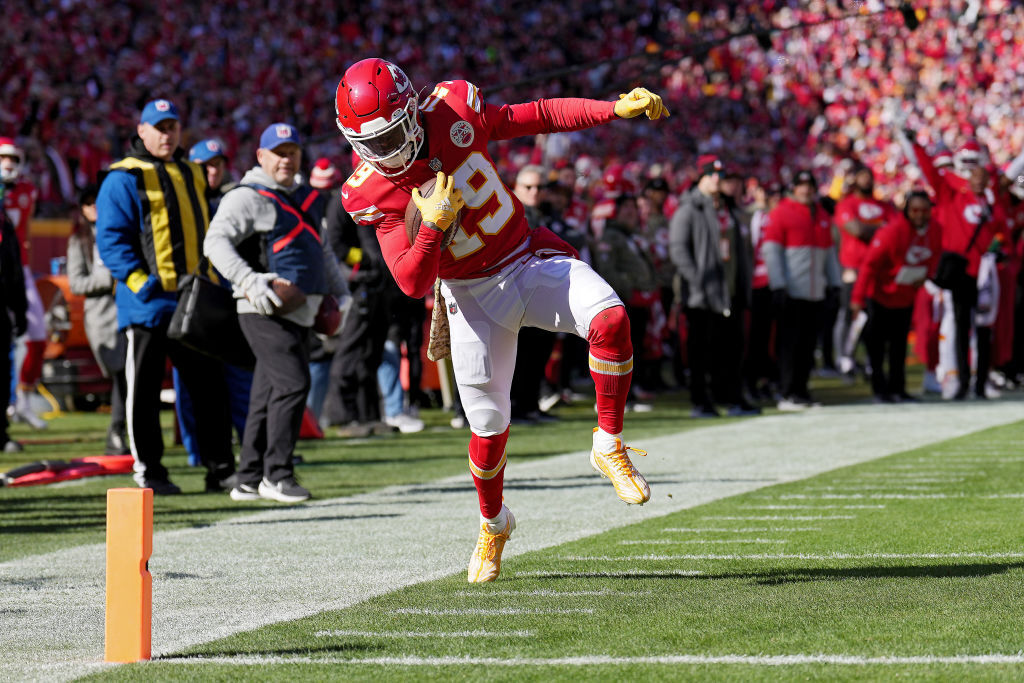 8/14
KANSAS CITY, MISSOURI – NOVEMBER 13: Kadarius Toney #19 of the Kansas City Chiefs scores a touchdown in the first quarter of the game against the Jacksonville Jaguars at Arrowhead Stadium on November 13, 2022 in Kansas City, Missouri. (Photo by Jason Hanna/Getty Images)

Jacksonville pulled out all the stops but Kansas City is … Kansas City. The Chiefs have dudes so open they’re literally skipping into the end zone. This is still the team to beat in the AFC. 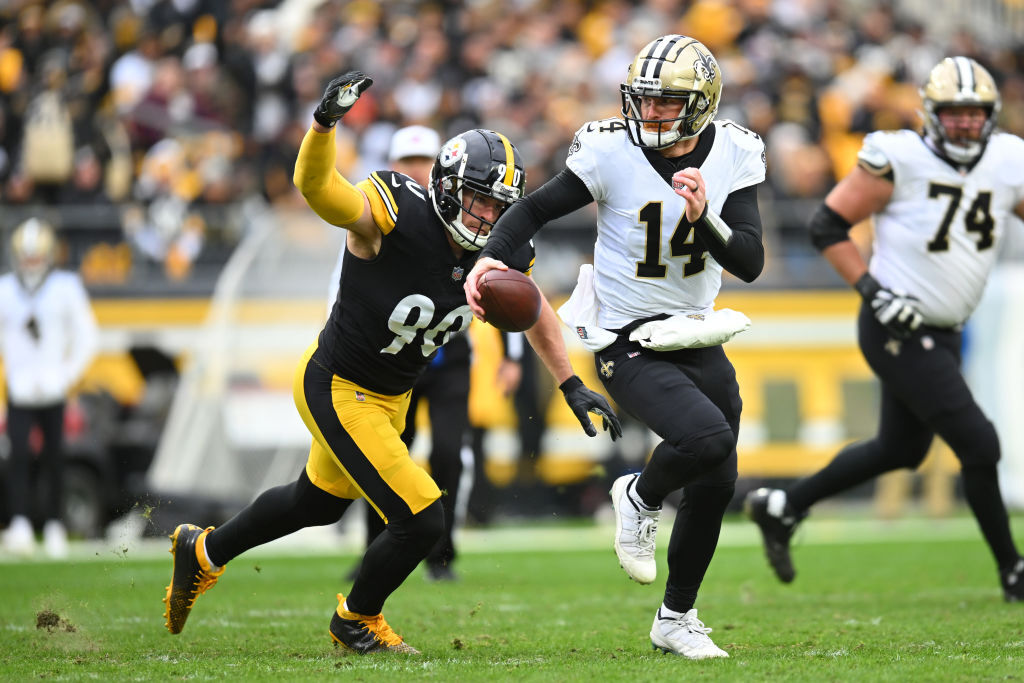 9/14
PITTSBURGH, PENNSYLVANIA – NOVEMBER 13: Andy Dalton #14 of the New Orleans Saints is chased by T.J. Watt #90 of the Pittsburgh Steelers during the second quarter at Acrisure Stadium on November 13, 2022 in Pittsburgh, Pennsylvania. (Photo by Joe Sargent/Getty Images)

I hate assigning won/loss records to individual players … but there’s something to Pittsburgh being 2-0 with T.J. Watt in the lineup, especially when taking into account the Steelers have been held to 20 or fewer points in eight straight games. Coach of the Year belongs to Mike Tomlin if he can craft a non-losing record out of this low-scoring recipe. 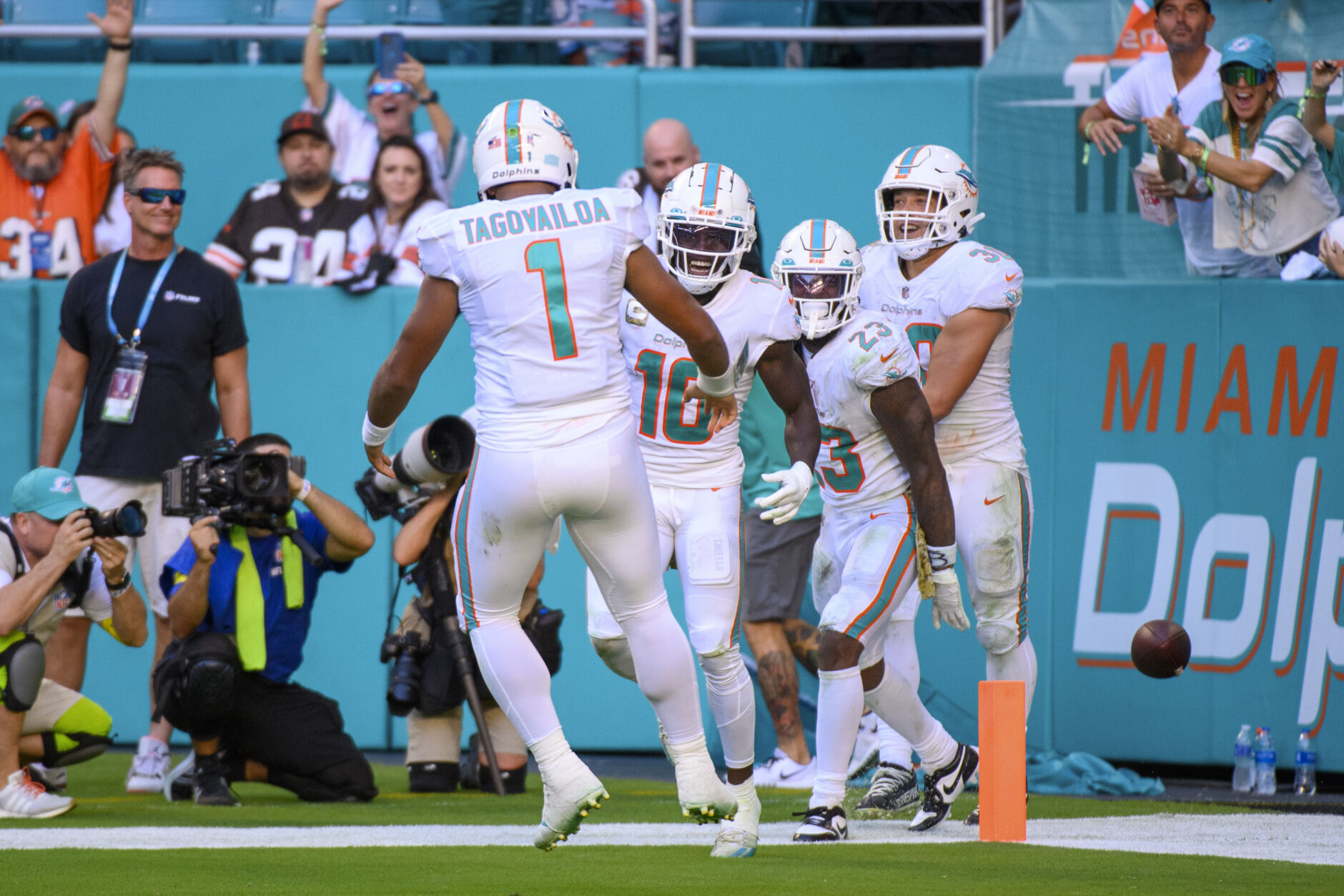 During Miami’s four-game win streak, Tua Tagovailoa has thrown 10 TDs and no picks to lead the Dolphins to their best start since 2001. It’s no longer a question of whether he’s Miami’s man — it’s whether he can stay healthy enough for the Fins to make a deep playoff run. 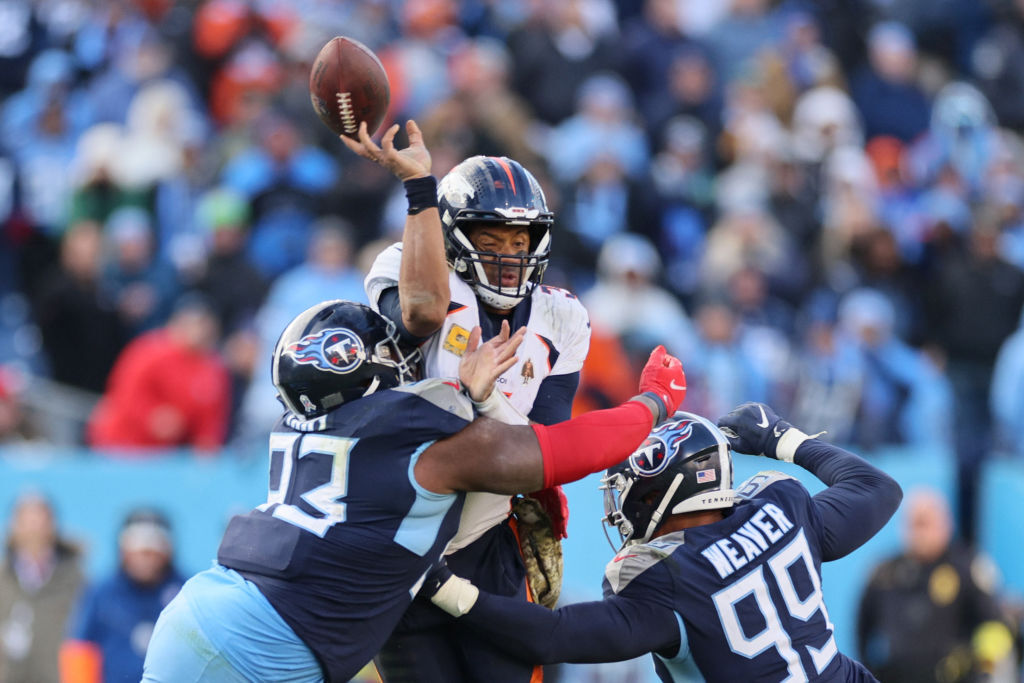 If you told me before the season Denver would have the best scoring defense in the league, I’d say they lead the AFC West. But Russell Wilson is at the helm of the NFL’s worst-scoring offense, throwing one or fewer touchdowns in seven of his eight starts this season. This is the present-day Herschel Walker trade.

Justin Fields is a movie every week! 🍿 pic.twitter.com/p2efqvKjM0

You might see Detroit’s first road win of the Dan Campbell era (which is pretty pitiful given this is midway through his second season) but I see this as evidence that Chicago finally has a winning formula.

The Bears have a historically great rush offense (the first in NFL history to top 225 rushing yards in five straight games) and Justin Fields doing MVP things. If that front office can capitalize on the draft picks acquired by trading away Roquan Smith and Robert Quinn (I know, Chicago fans — big ‘if’), this is the team to beat in the NFC North in the not-too-distant future. 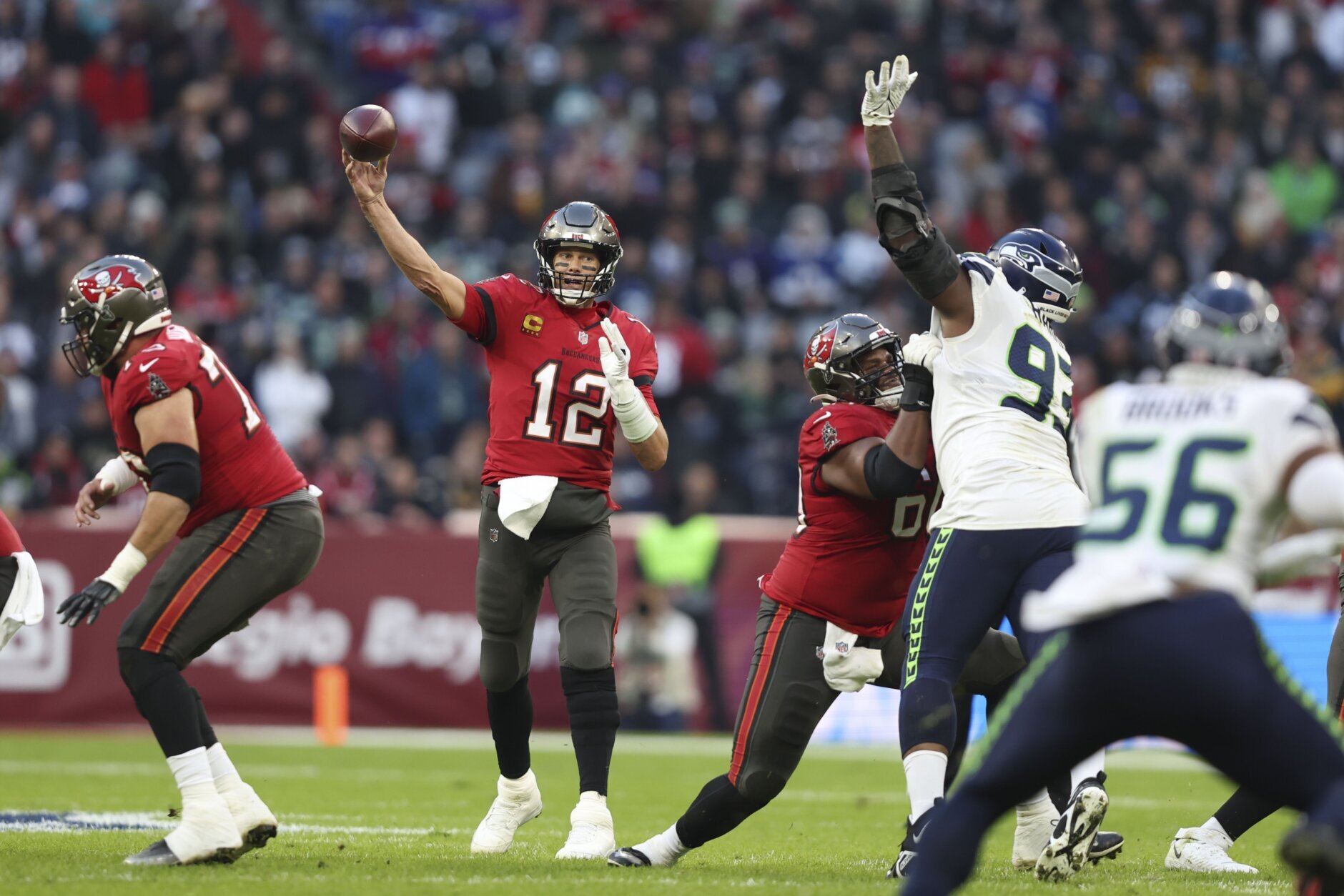 In Tom Brady’s never-ending quest to own EVERY record, he missed out on the interception-less streak but wins the first NFL game in Germany to become the first player to win in four different countries. This one may have saved Tampa’s season.

Titans go with undrafted rookie kicker with Bullock out

Seahawks happy to be home for a while, set to host Raiders