Another frustrating byproduct of the NFL expanding to 17 games is that the season no longer cleanly breaks down into four quarters as it has in years past. But for the purposes of this exercise, we’ll still treat the completion of Week 4 as the first quarter of the 2021 NFL season.

Week 1 games are usually misleading, but after Week 4, we start to understand which teams are good or bad. But all 4-0 and 3-1 teams are not created equal — some will rise, some will fall. So here’s my list of who will do the former and who will do the latter. 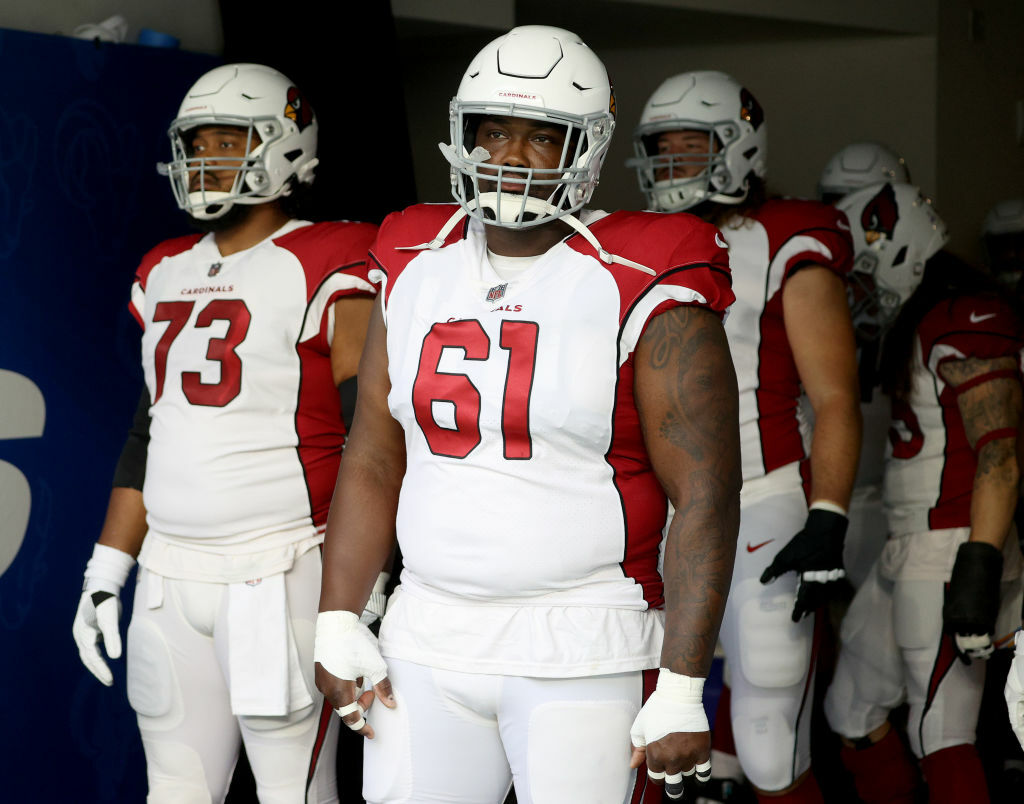 1/13
INGLEWOOD, CALIFORNIA – OCTOBER 03: Rodney Hudson #61 and Max Garcia #73 of the Arizona Cardinals wait in the tunnel to the field before the game against the Los Angeles Rams at SoFi Stadium on October 03, 2021 in Inglewood, California. (Photo by Harry How/Getty Images)

Who had the Cardinals as the last undefeated team in the NFL?

But we see why: Kyler Murray is a legit star in the making with a bounty of weapons at his disposal in an offense that’s taken the next step in part because Rodney Hudson has helped fortify the offensive line. J.J. Watt has had the same impact on the Cardinals defense. I love this roster.

However, as much as I like this roster, I don’t trust this head coach. Kliff Kingsbury, the self proclaimed Ted Lasso of the NFL, couldn’t win in college with Patrick Mahomes, so it’s far from a given he’s the right coach to lead a pro team to anything beyond mediocrity. If he proves to be better than a glorified offensive coordinator, I may eat crow on this pick. But given the division in which Arizona plays, I doubt I will. 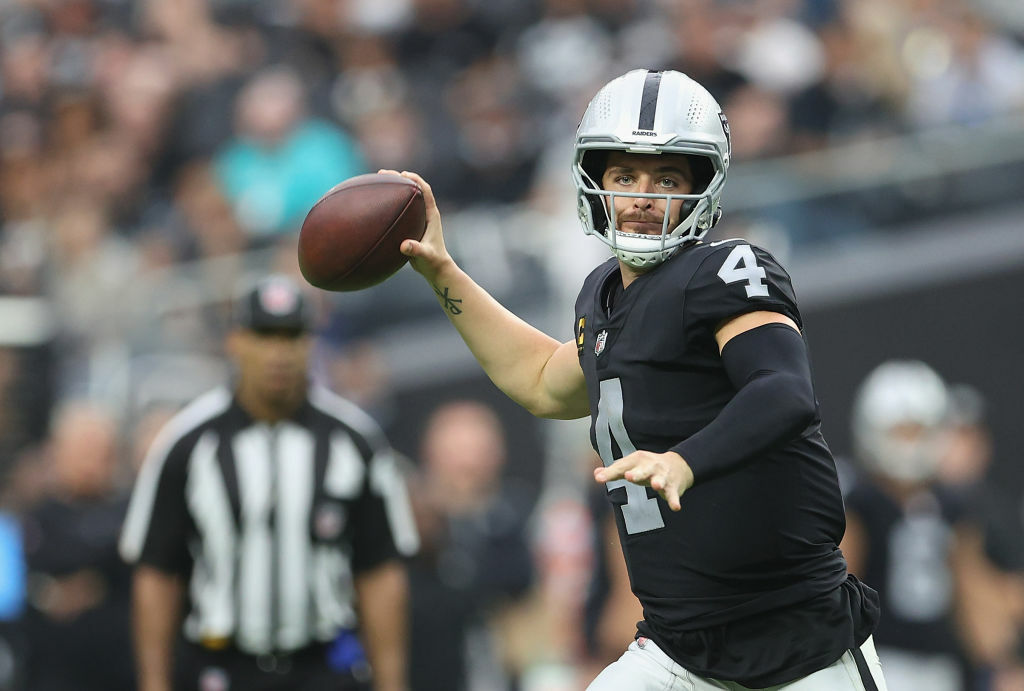 2/13
LAS VEGAS, NEVADA – SEPTEMBER 26: Quarterback Derek Carr #4 of the Las Vegas Raiders throws a pass during the NFL game at Allegiant Stadium on September 26, 2021 in Las Vegas, Nevada. The Raiders defeated the Dolphins 31-28 in overtime. (Photo by Christian Petersen/Getty Images)

I believe Las Vegas is fraudulent for the same reason I don’t believe in Arizona: the head coach and a loaded division.

My colleagues have heard this rant at high volumes on more occasions than I care to admit — Jon Gruden is the most overrated coach in NFL history. And that’s saying something in a league that kept Jeff Fisher gainfully employed as a head coach for 22 years.

Gruden, whose lone Super Bowl victory came with a championship-caliber roster built by Tony Dungy that beat the team he just coached the prior season, is in his 15th season as a head coach. In that time, he’s got only six winning seasons and only five playoff wins (three of which came during the Super Bowl run). The Raiders defense remains a huge question mark but I like Derek Carr enough to keep this team in playoff contention. But do we really think they’re better than the Chiefs? Methinks not. 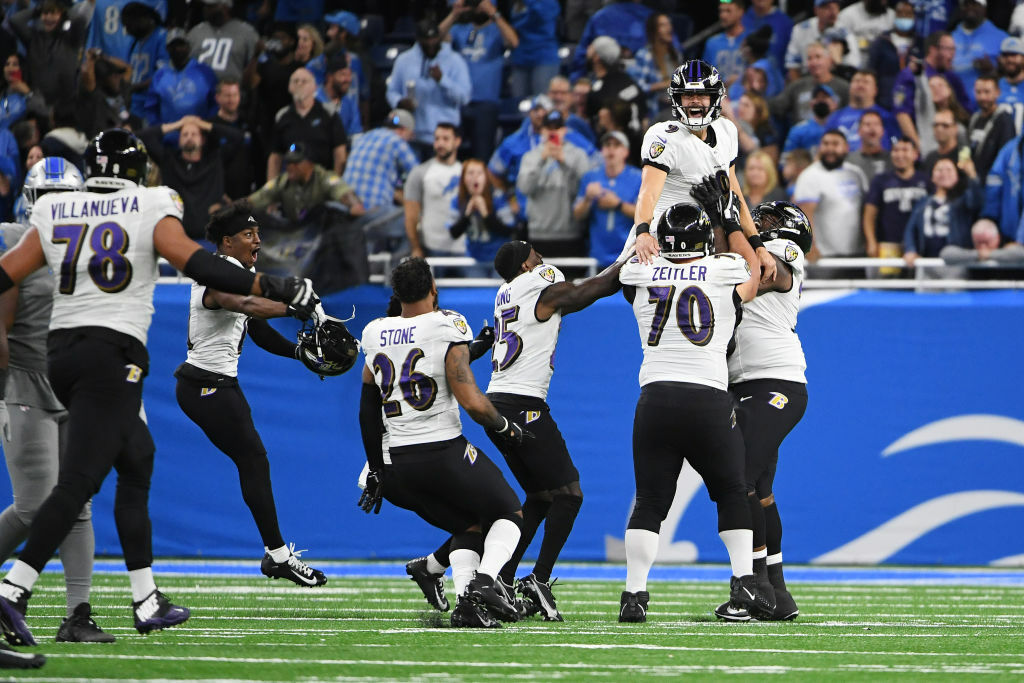 3/13
DETROIT, MICHIGAN – SEPTEMBER 26: Justin Tucker #9 of the Baltimore Ravens celebrates the winning field goal with his team in the game against the Detroit Lions at Ford Field on September 26, 2021 in Detroit, Michigan. (Photo by Nic Antaya/Getty Images)

Baltimore is dealing with a rash of injuries, but as long as John Harbaugh is on the sideline and Lamar Jackson is healthy enough to be electric, the Ravens always have a chance. Last year, they finally won a playoff game and this year, Baltimore knocked off the Chiefs at long last. The only thing left is a Super Bowl run, and given their two titles both came as wild cards, I wouldn’t bet against Baltimore. 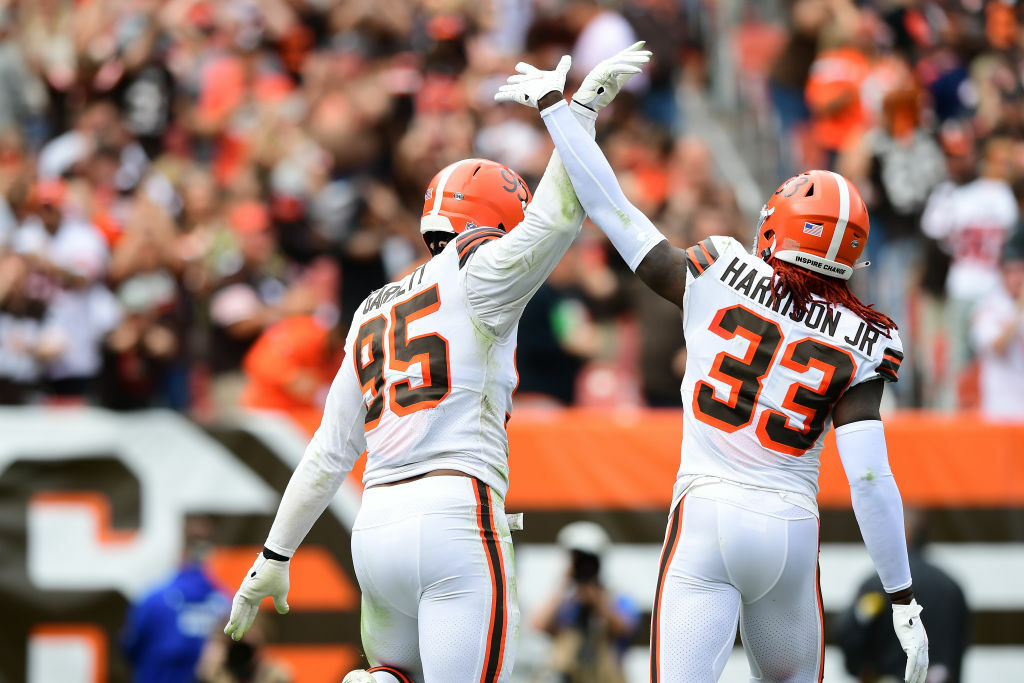 4/13
CLEVELAND, OHIO – SEPTEMBER 26: Myles Garrett #95 and Ronnie Harrison #33 of the Cleveland Browns celebrate during the fourth quarter in the game against the Chicago Bears at FirstEnergy Stadium on September 26, 2021 in Cleveland, Ohio. (Photo by Emilee Chinn/Getty Images)

Cleveland has a ferocious defense currently ranked second in the NFL in yardage and fourth in points allowed. The Browns offense is as balanced as any in the league, so it’s not a matter of “if” Baker and the boys get rolling — it’s when. 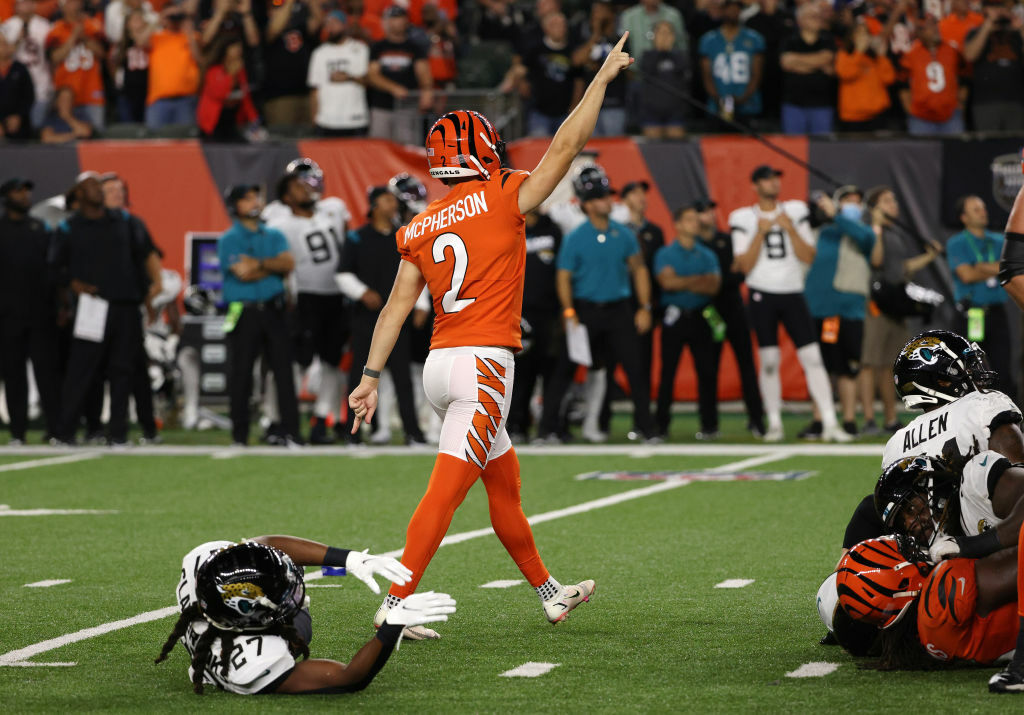 5/13
CINCINNATI, OHIO – SEPTEMBER 30: Evan McPherson #2 of the Cincinnati Bengals celebrates a game winning field goal against the Jacksonville Jaguars during the second half of an NFL football game at Paul Brown Stadium on September 30, 2021 in Cincinnati, Ohio. (Photo by Dylan Buell/Getty Images)

Cincinnati’s record is fool’s gold. Pittsburgh’s struggles makes that win far less surprising than it was initially, and the Bengals defense is fat from feasting on bad offenses. If they stymie Aaron Rodgers Sunday, I may have to revisit this, but I smell a course correction coming to the Queen City. 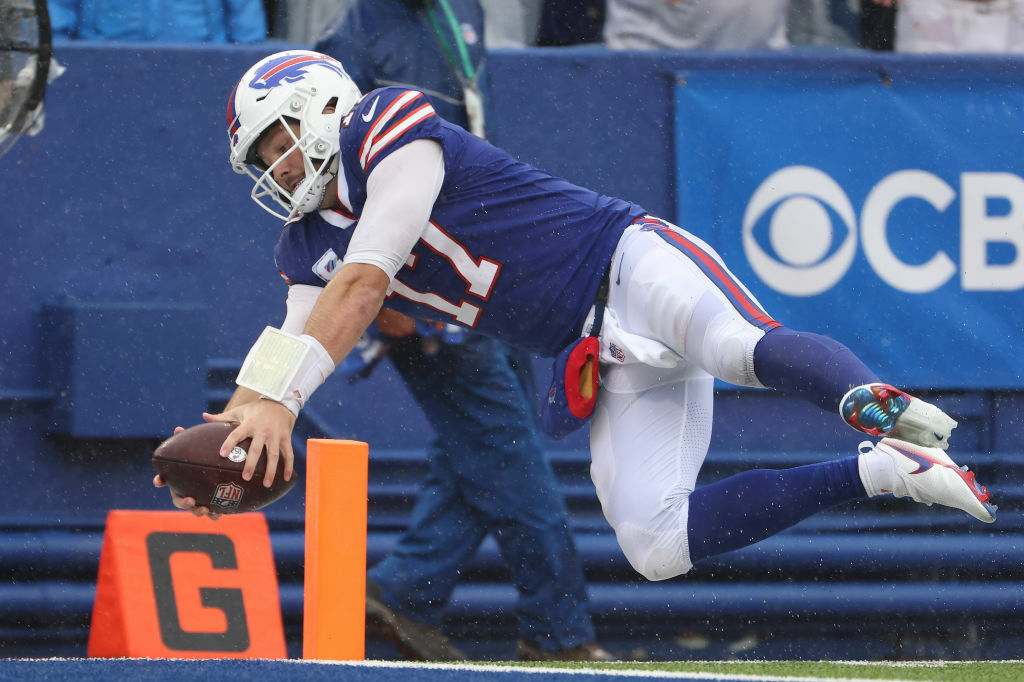 6/13
ORCHARD PARK, NEW YORK – OCTOBER 03: Quarterback Josh Allen #17 of the Buffalo Bills reaches with the ball for the end zone against the Houston Texans during the game at Highmark Stadium on October 03, 2021 in Orchard Park, New York. (Photo by Timothy T Ludwig/Getty Images)

Buffalo has somehow managed to be even better than expected. The Bills defense is by far allowing the fewest yards (216.8) and points (11) per game and pitched two shutouts in the first quarter of the season. Local fans of a certain age may have fond memories of the only other two teams to do that: Washington (1991) and Baltimore (2000). The latter boasts one of the greatest defenses of all time and both won Super Bowls.

The offense is scoring the second-most points in the league and ranks in the top 10 in every relevant metric. This could very well be the team to beat in the AFC, if not the best team in the entire NFL. 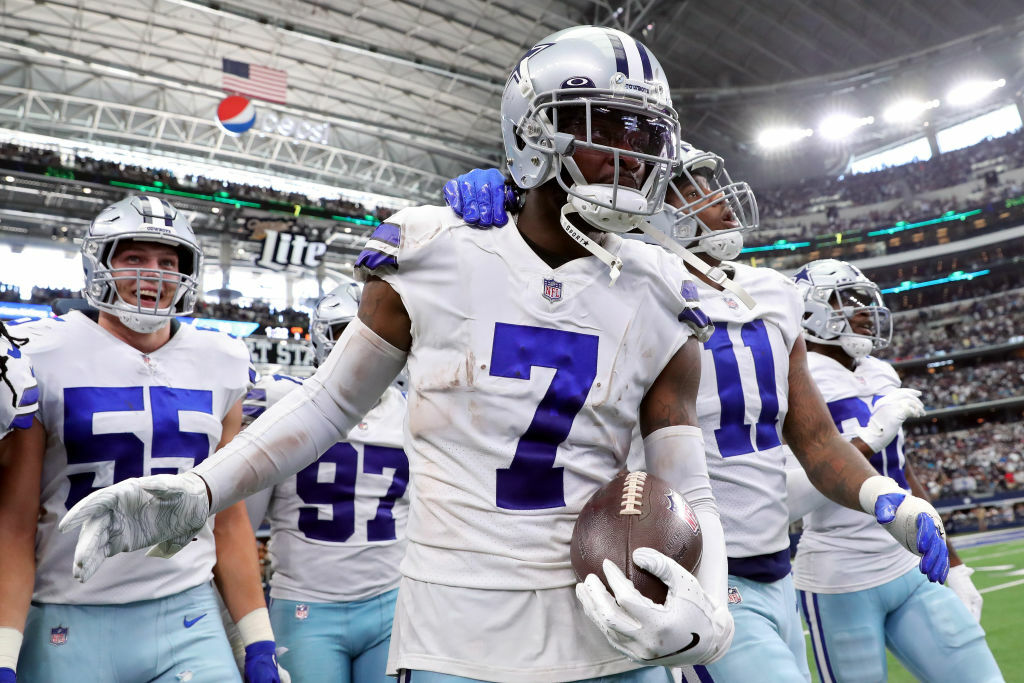 7/13
ARLINGTON, TEXAS – OCTOBER 03: Trevon Diggs #7 of the Dallas Cowboys celebrates after an interception during the third quarter against the Carolina Panthers at AT&T Stadium on October 03, 2021 in Arlington, Texas. (Photo by Tom Pennington/Getty Images)

As a Washingtonian through and through, this pains me to say but Dallas just might be for real.

Dak Prescott is playing lights out, Zeke Elliott appears to be back to his All-Pro form, and the defense has made great strides under new defensive coordinator (and, as J. Brooks always likes to point out, Salisbury alum) Dan Quinn. Trevon Diggs is repping Gaithersburg to the fullest with a Defensive Player of the Year-caliber performance and Micah Parsons is making me look smart for picking him to win Defensive Rookie of the Year. I don’t think they’re a Super Bowl team (mainly because the average Madden player can manage a clock better than Mike McCarthy), but they feel closer than they’ve been in decades. 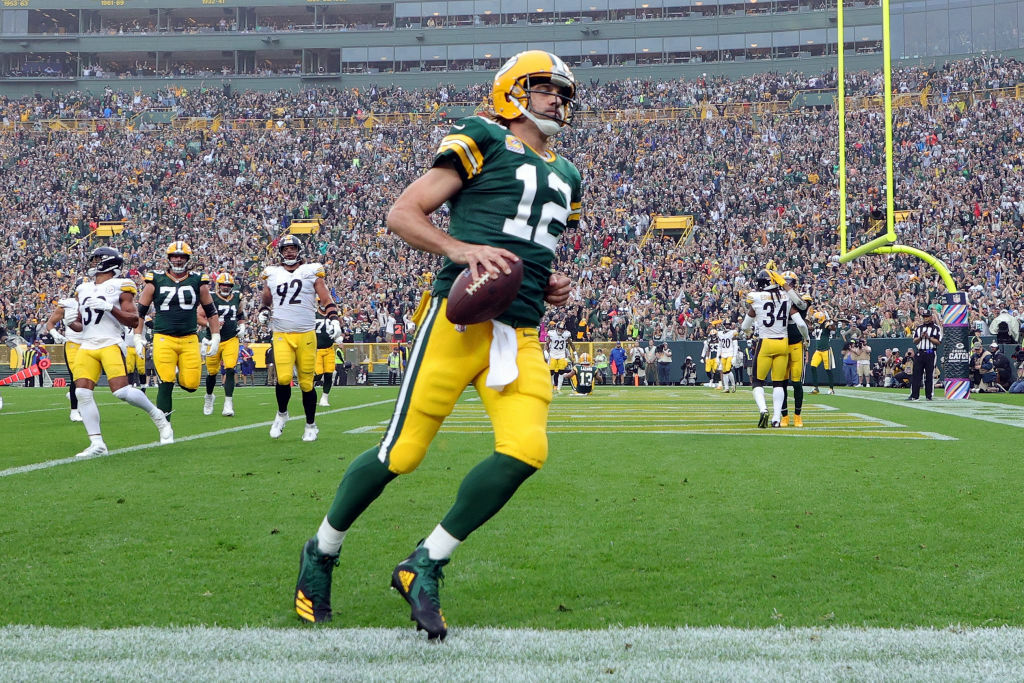 8/13
GREEN BAY, WISCONSIN – OCTOBER 03: Aaron Rodgers #12 of the Green Bay Packers runs for a touchdown during the second quarter against the Pittsburgh Steelers at Lambeau Field on October 03, 2021 in Green Bay, Wisconsin. (Photo by Stacy Revere/Getty Images)

Do I need to show my work on this? Aaron. F-ing. Rodgers. 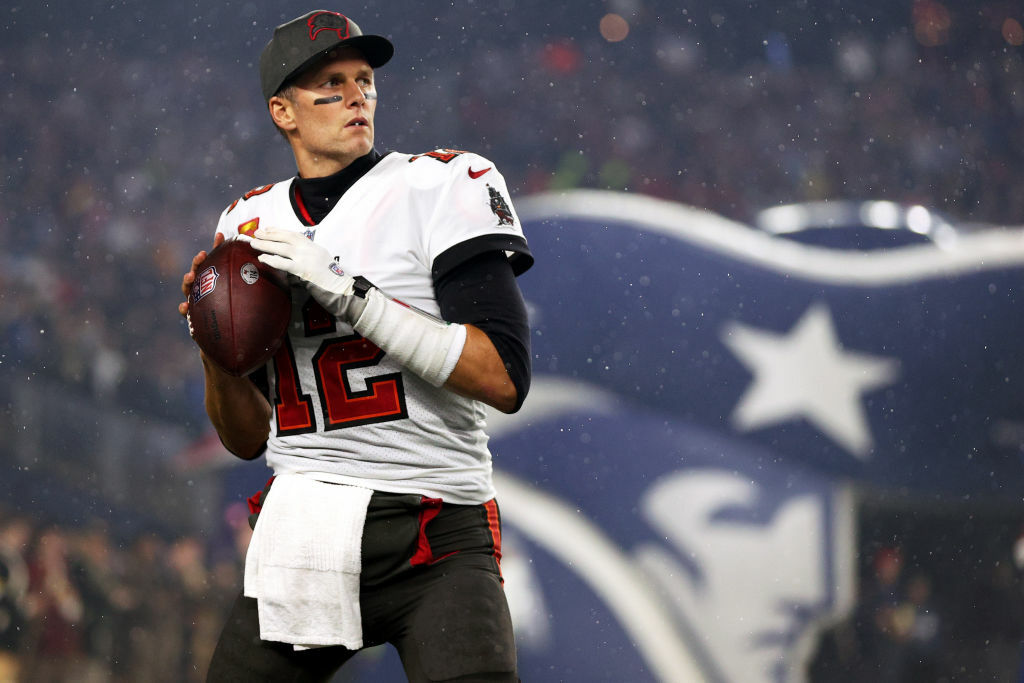 9/13
FOXBOROUGH, MASSACHUSETTS – OCTOBER 03: Tom Brady #12 of the Tampa Bay Buccaneers warms up in front of the New England Patriots tunnel before the game between the Buccaneers and the Patriots at Gillette Stadium on October 03, 2021 in Foxborough, Massachusetts. (Photo by Maddie Meyer/Getty Images)

Do I need to show my work on this? Thomas. Edward. Patrick. Brady. Jr.

Ok, one qualifier: The only thing that can undo Tampa’s return to the Super Bowl is injuries. The Bucs secondary is decimated and the season isn’t even half over yet. As deep and complete a team as this is, they can’t endure many more losses. 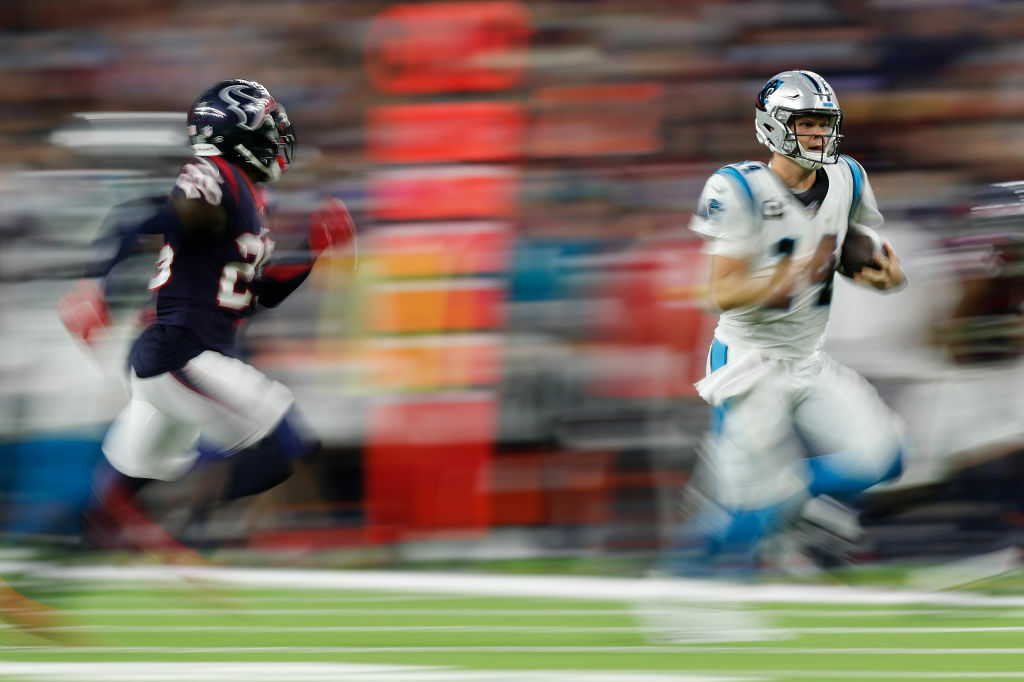 10/13
HOUSTON, TEXAS – SEPTEMBER 23: Sam Darnold #14 of the Carolina Panthers tries to outrun Desmond King #25 of the Houston Texans during a second half run at NRG Stadium on September 23, 2021 in Houston, Texas. (Photo by Tim Warner/Getty Images)

Though Carolina is decidedly better than I predicted, this is still a team playing in a division with the defending champions and a playoff-caliber New Orleans squad still adjusting to life without Drew Brees and a monthlong displacement. Give credit to Sam Darnold for improving in all facets and Matt Rhule for appearing to spark one of his patented turnarounds, but the late-season schedule sets up for the Panthers to get a thorn in their paws down the stretch. 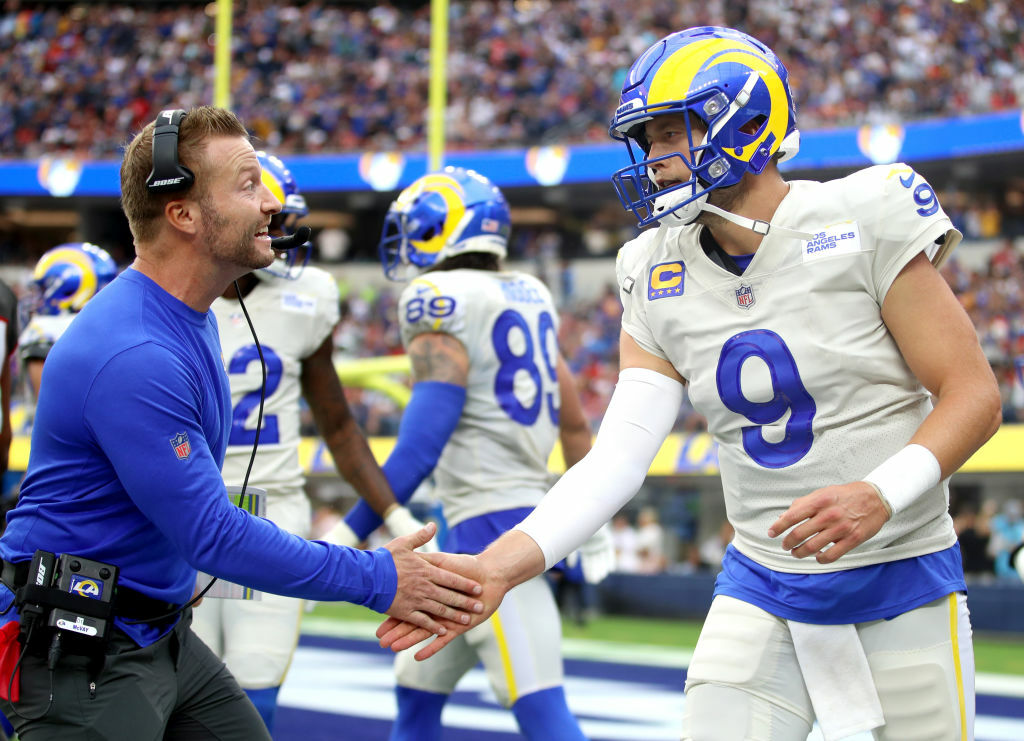 Were it not for Washington’s inexplicable plummet, Los Angeles would hold the title for the NFL’s most disappointing defense. Last year’s top-ranked unit is now sixth-worst in yardage and 19th in points allowed even though they have the league’s best lineman (Aaron Donald) and best corner (Jalen Ramsey). Sean McVay is betting it all on Matthew Stafford being great — and after 12 years in Detroit without a single playoff win, I’m just not sure that he is. 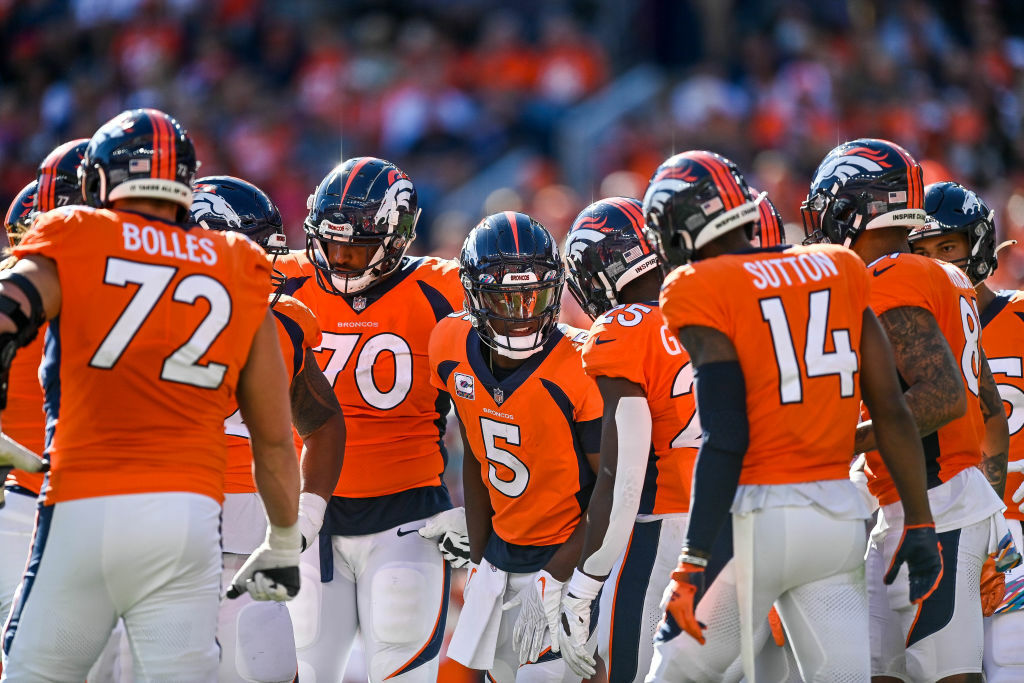 12/13
DENVER, CO – OCTOBER 3: Denver Broncos players huddle around Teddy Bridgewater #5 in the second quarter of a game against the Baltimore Ravens at Empower Field at Mile High on October 3, 2021 in Denver, Colorado. (Photo by Dustin Bradford/Getty Images)

Denver’s wins are over the Jets, Giants and Jaguars, making them the softest of the teams to start 3-0. The Broncos only have two more “easy” games on their remaining schedule, and that’s not counting Sunday’s game in Pittsburgh against the 1-3 Steelers (the only team currently with a losing record the Broncos will play in the next five games).

Add in the uncertainty surrounding Teddy Bridgewater’s concussion, and it’s like that a course correction is imminent. 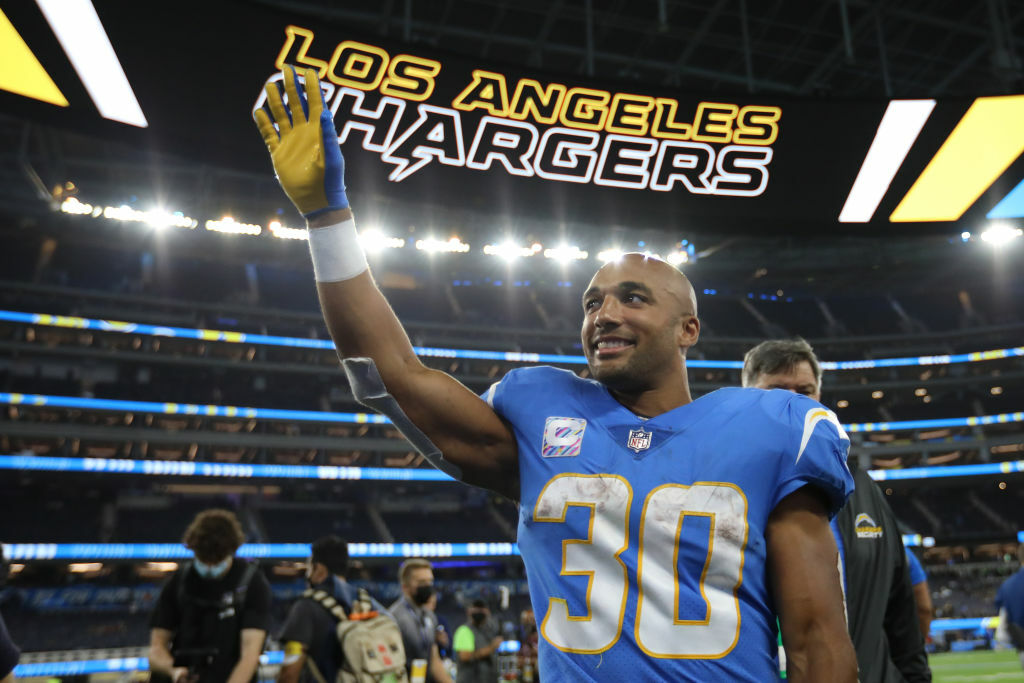 It’s hard to make this pick considering Los Angeles apparently likes the Raiders more than the Chargers, but this team has top 10 units on either side of the ball and Justin Herbert is fast becoming one of the biggest stars in the league. In fact, I’ll go a step further and say this team will become a bigger draw in L.A. than the Rams.

OLB Dupree back for Titans vs. Bills after missing 3 games

Crackdown on taunting is working the way the NFL intended