Flash flood warning sirens blared Wednesday night, and Howard County police closed Main Street as a precaution, in the popular tourist destination along the Patapsco River that was devastated by deadly flooding in 2016 and 2018.

“Though yesterday storm was nerve-wracking for many, the systems that we put in place together worked as intended, especially here in Ellicott City,” Howard County Executive Calvin Ball told reporters during a news conference Thursday morning from the town’s Main Street, which was ravaged by two major floods in 2018 and 2016. 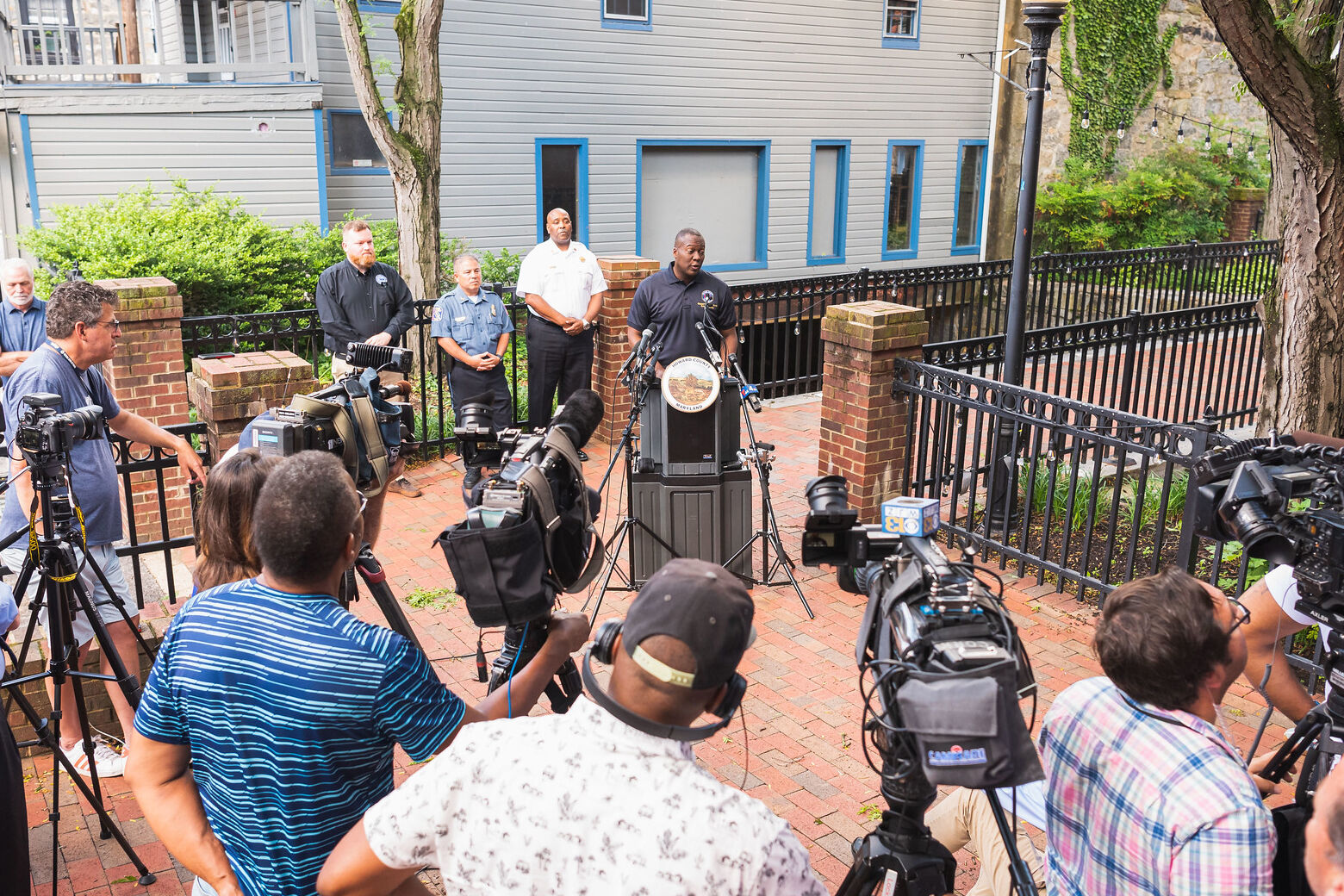 “The impact of yesterday’s storms was felt in Ellicott City and across our county,” Ball said. Many points of the county saw heavy rainfall rates; a flash flood warning was issued, there was even a possible tornado reported in Columbia.

Ball said gusty winds sent at least one tee into a house and another came down onto an apartment building. Nearly 30 roads were impacted by flooding or downed trees. Immediately after the storm, there were about 3,000 BG&E customers without power; that had fallen to about 300 as of Thursday morning. 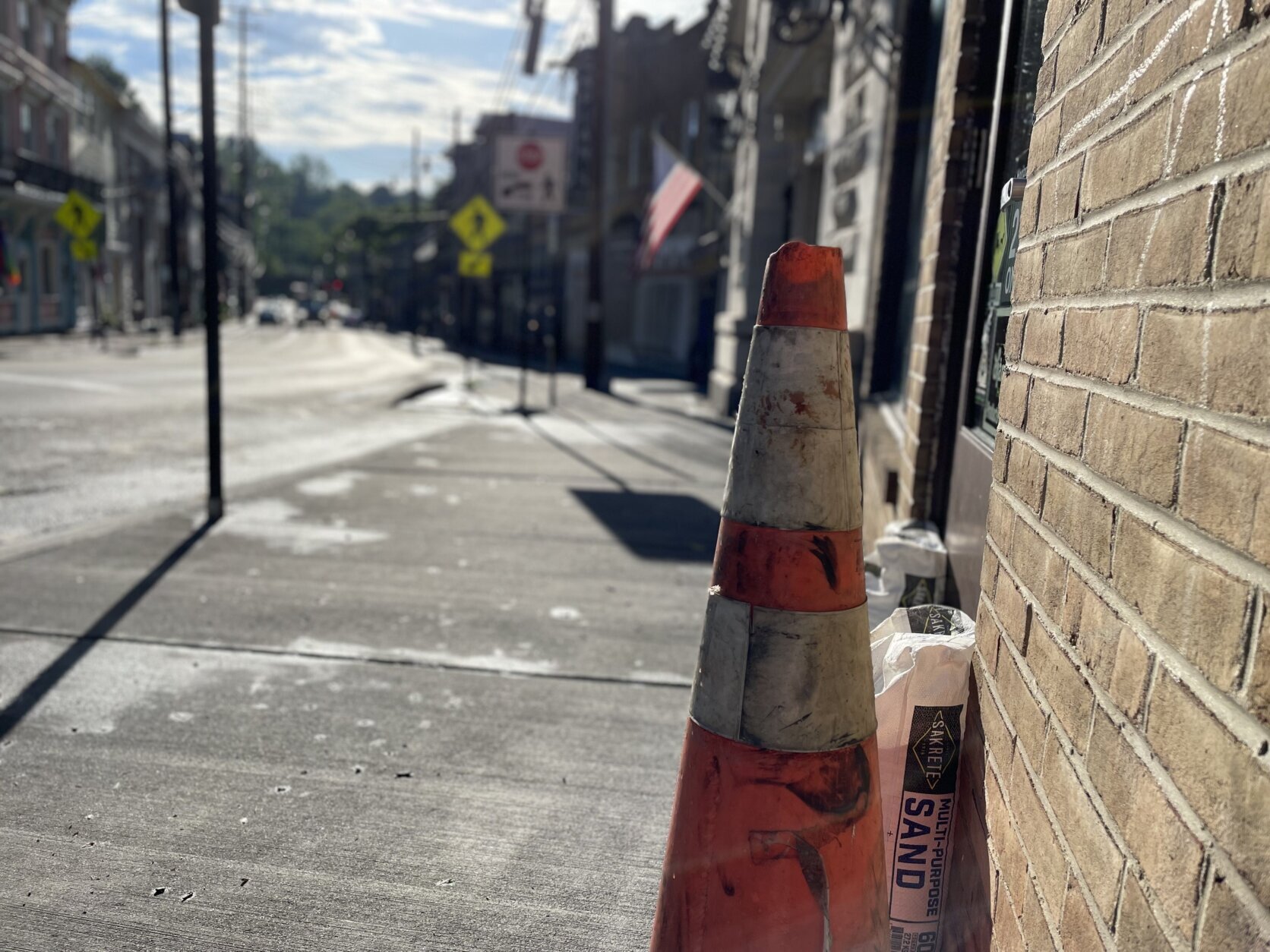 In Ellicott City, more than 2 inches of rain fell in just over two hours, with the majority of the rainfall falling in just about an hour.

“The rate of the rainfall was very similar to the rate we experienced at some points during the 2018 flood,” Ball said.

At the height of the storm, the water on flood-prone Main Street reached about curb height at the lower end of the street. “That’s about six inches of moving water,” Ball said.

When the rain cleared, there was minimal property damage reported along Main Street and no injuries, Ball said. 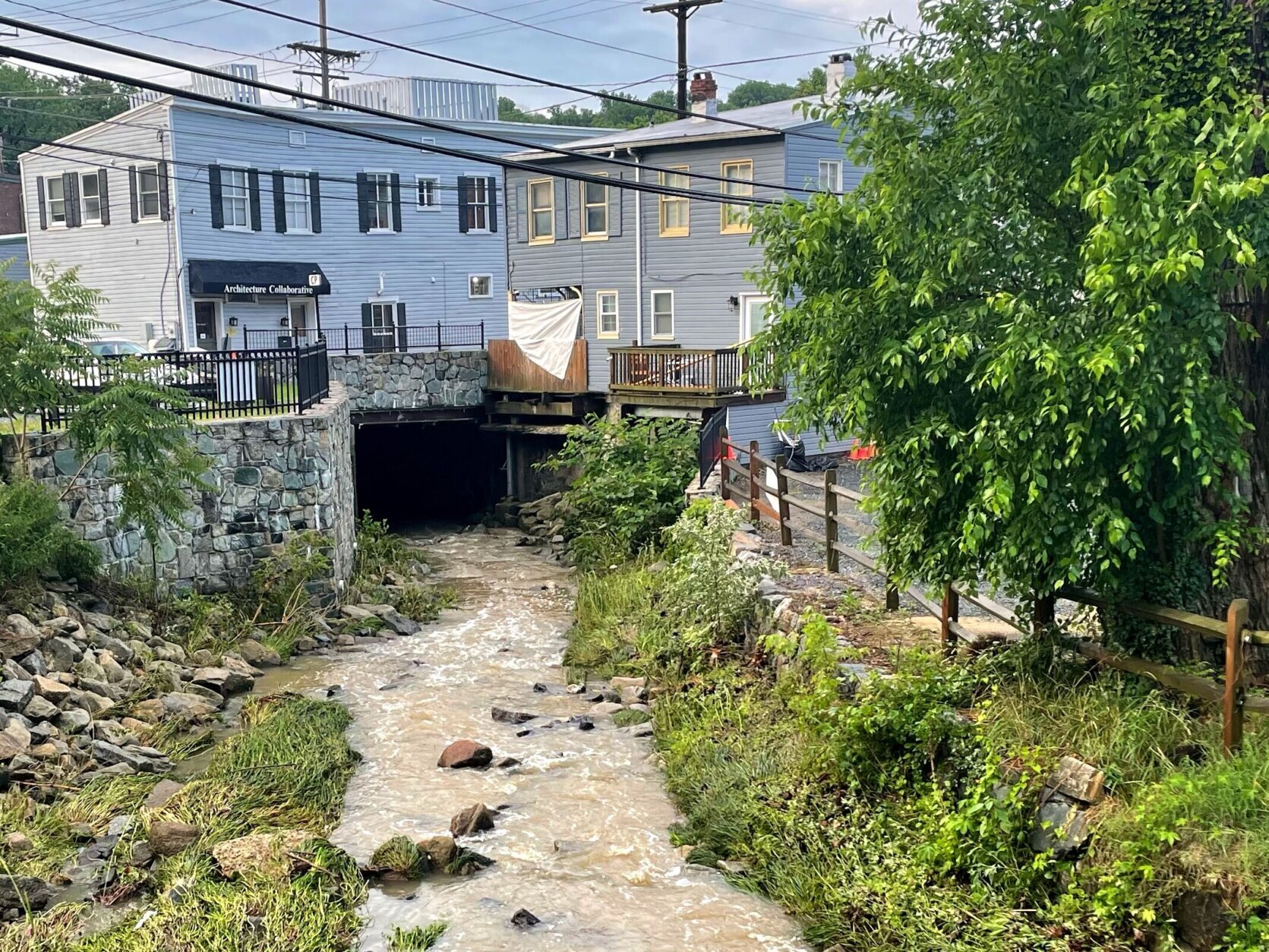 3/5
Tiber Creek was within its banks Thursday morning, after a night of heavy rains. (WTOP/Neal Augenstein)

Howard County has made several infrastructure improvements to try to weather flash flooding in Ellicott City.

With several streams snaking through and under downtown Ellicott City, Tiber Creek was raging Wednesday evening. In 2018, cars from a nearby parking lot were washed downstream, and lodged under the Court Street bridge, a few feet from Main Street.

Ball said crews will be out over the next few days to inspect stream channels and begin clearing debris. 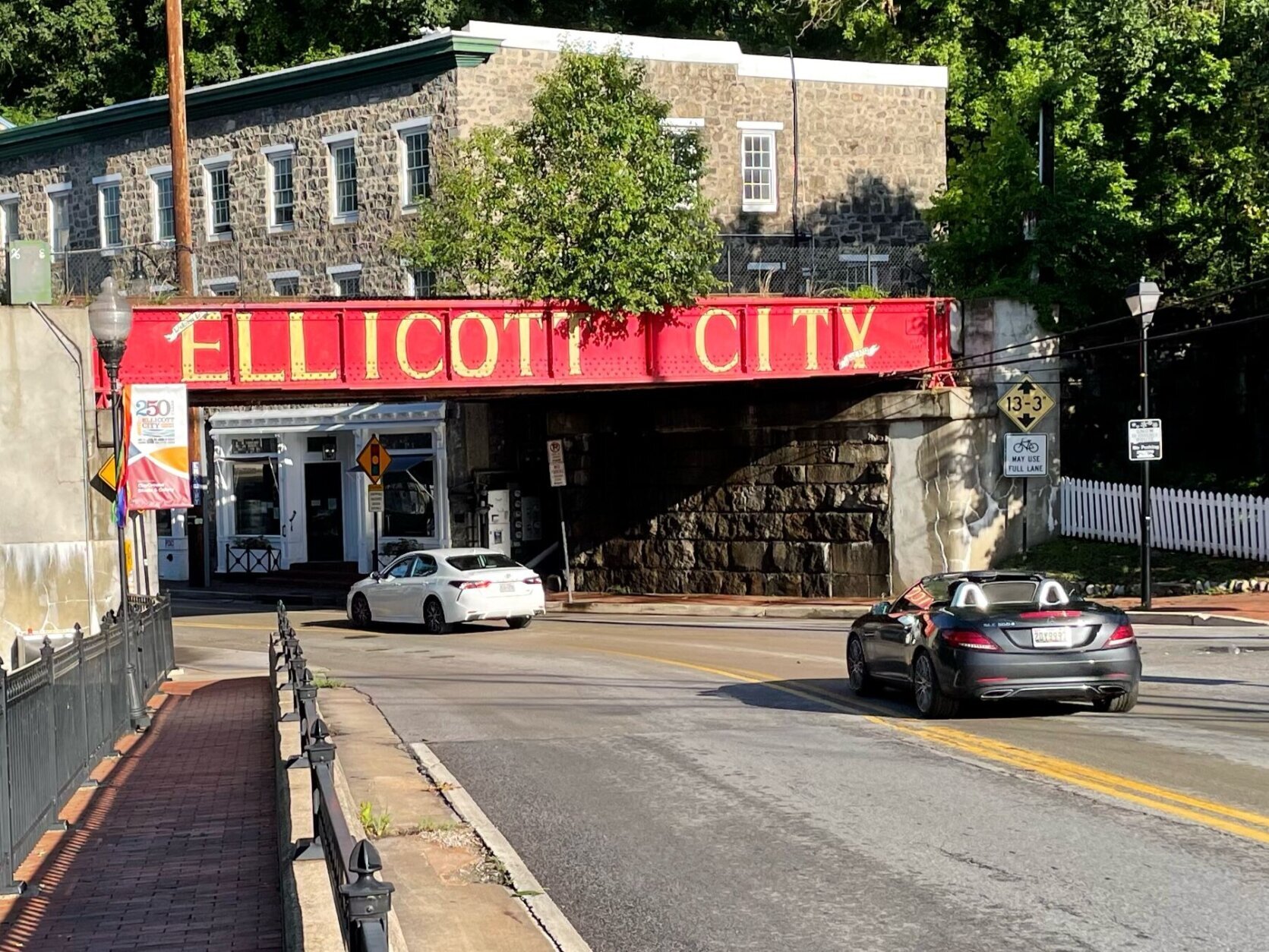 4/5
A tunnel project to keep stormwater off Main Street is expected to begin later this year. (WTOP/Neal Augenstein)

Two weeks ago, Howard County Executive Calvin Ball announced funding has been secured to begin building a 5,000 foot tunnel that will carry water away from Main Street and into the Patapsco River.

The 18-foot-diameter tunnel, would be able to carry about a swimming pool’s worth of water every second, would run parallel to Main Street, at points up to 100 feet below ground level. 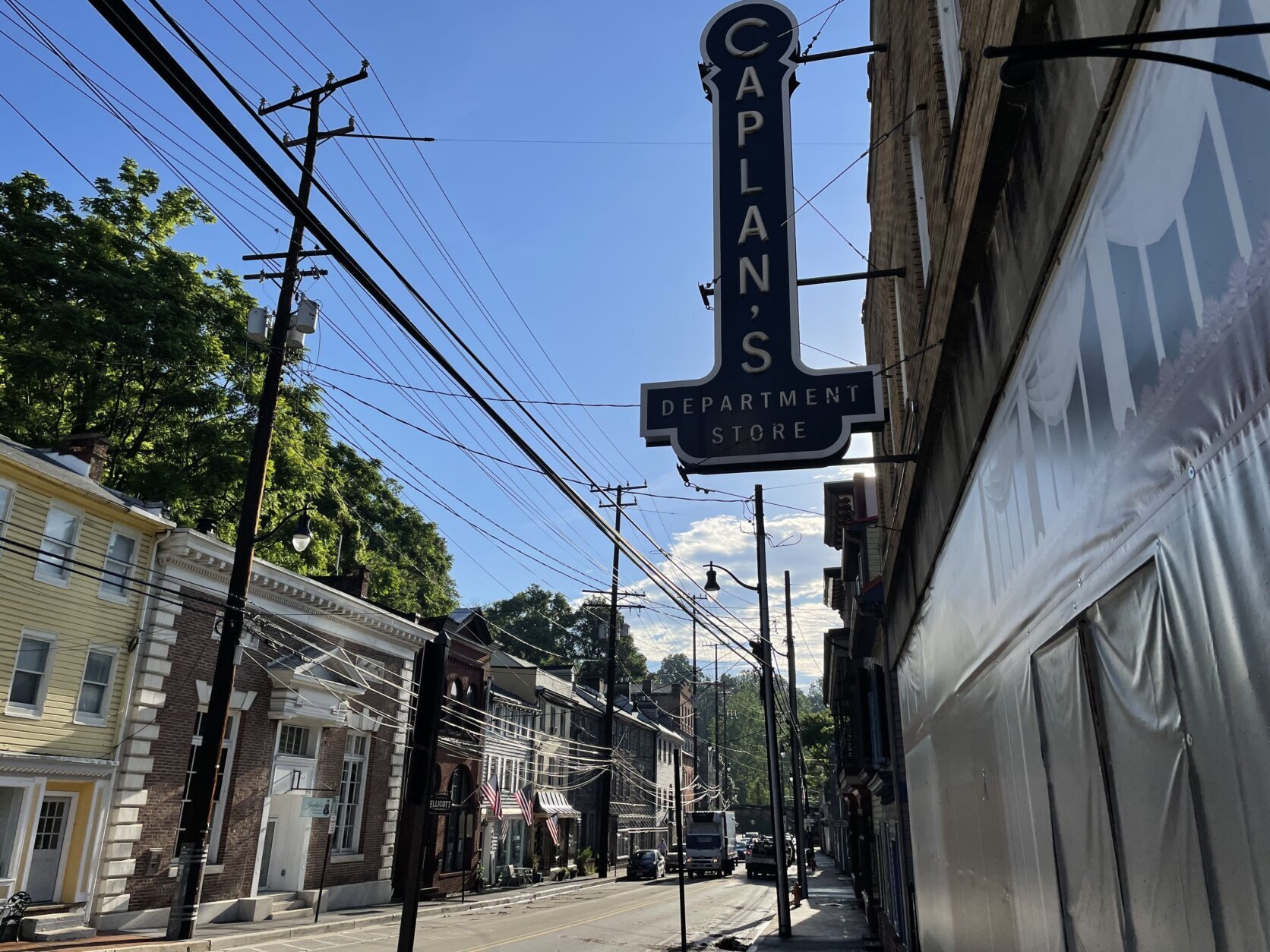 5/5
Caplan’s Department Store has not reopened since the 2018 flooding.

Some business owners whose shops were heavily damaged in 2016 were still making repairs when the 2018 flood stuck — a few decided to go out of business or move.

Caplan’s Department Store has plastic sheeting where windows used to look onto Main Street. While the building, as is, is considered structurally unsound, the county hopes to rescue a portion of it, and the facade.

“We are very pleased that there have been a lot of ribbon-cuttings over the last few years and, I think, there’s a lot of energy and excitement around town,” Ball said.