By late October, as foliage thins and shadows stretch across the wayside, the faint outlines of abandoned roads and bridges lost to time and overgrowth reappear. These dilapidated D.C.-area roadways have withstood decades of harsh weather, graffiti and neglect.

Nothing is forever, not even highways. As roads are realigned and replaced, the unused curves and carriageways severed from their original course are sloughed into the woods, never to be traversed again. Vestiges of these ghost roads can live on in the underbrush for decades.

There are dozens of ghost roads scattered throughout the darker corners of the D.C. region. Traces of an old Route 1 wind through a forest in Stafford County, Virginia. About a mile of Sharperville Road withers in the marshy outskirts of Accokeek, Maryland. There are even closed roads and bridges known for their haunting lore, such as Governor’s Bridge Road in Bowie, Maryland. 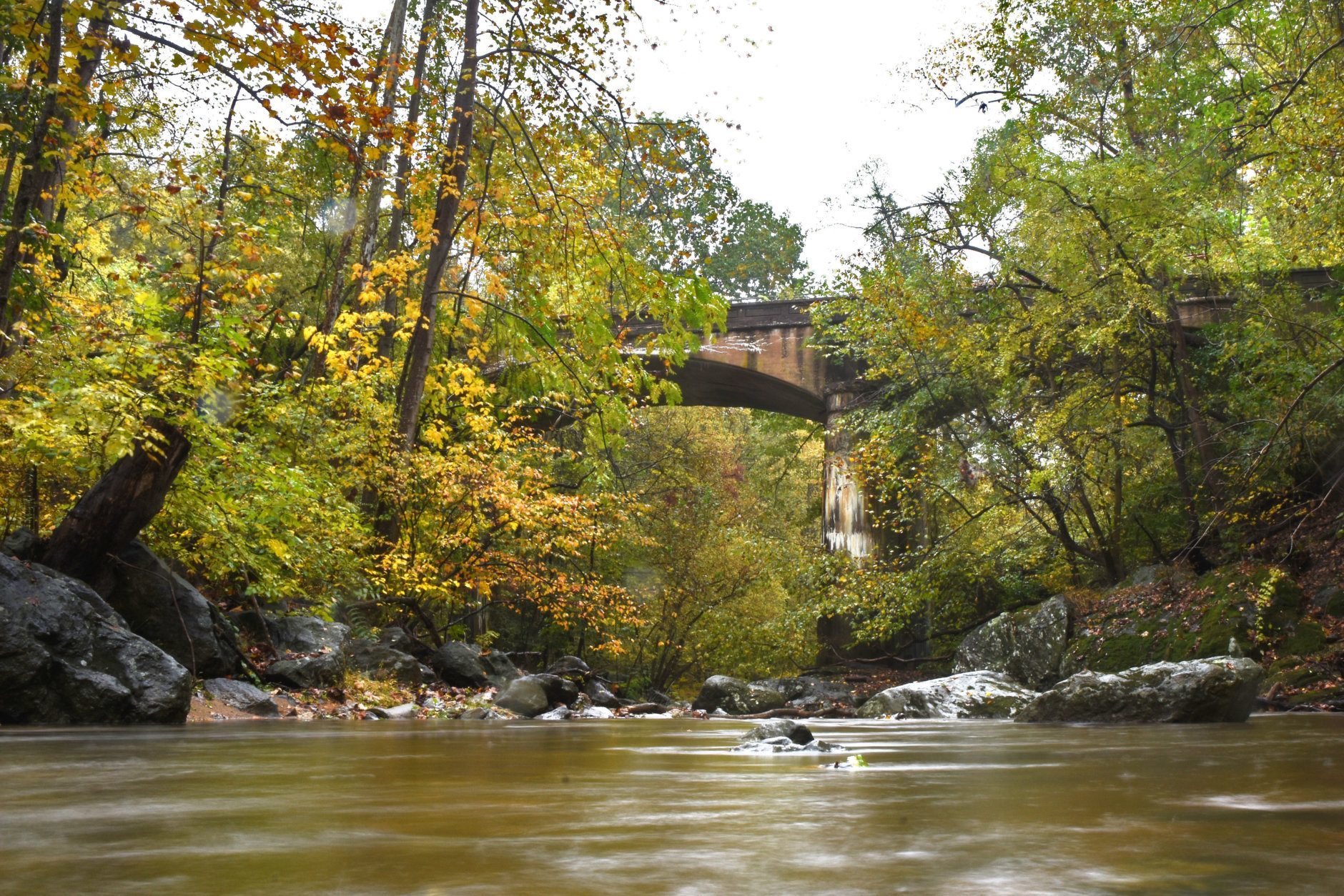 1/5
Old Columbia Road has spanned Paint Branch for more than a century. A portion of the road near White Oak became obsolete in the 1950s after Route 29 was rerouted across two new bridges upstream.

In 1911, the Luten Bridge Company set out to build a bridge for Old Columbia Pike over Paint Branch. Wagon traffic was increasing between Ellicott City, Maryland, and D.C., and the old crossing presented a perilous bottleneck to teamsters. The spandrel arch bridge on stone abutments was completed in 1912.

A century later, the Luten Bridge still stands 60 feet above Paint Branch. It was rendered obsolete in 1957 when U.S. Route 29 was realigned and sent over the valley about 400 feet upstream.

In a paper penned in the 1930s, Frederick L. Wenger points out that when the bridge was built, reinforced concrete was in its infancy. The specialized cement used for the Luten Bridge, he wrote, was imported from Germany for $8 per barrel. 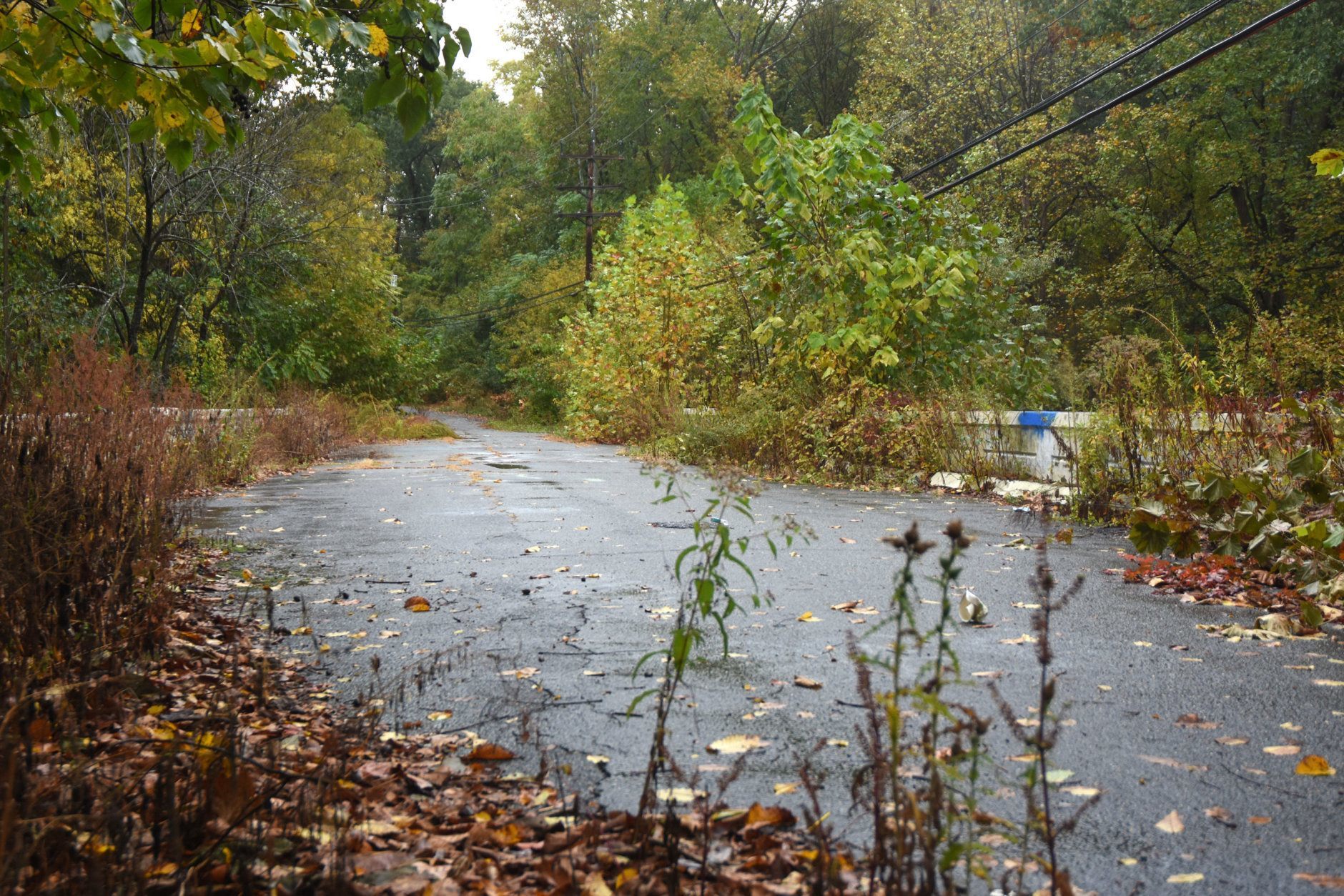 2/5
Thistle and other plants spout from a crumbling section of the roadway on the outskirts of White Oak, Maryland.

Like many wagon routes, Old Columbia Pike follows the natural contour of the Piedmont. Appendages of the old pike twist and turn alongside Route 29, and some portions remain open to local traffic. The section near Paint Branch, however, has been closed to vehicles for nearly half a century.

Anecdotally, the bridge sustained damage from the historic flooding brought about by Hurricane Agnes, but the exact date of closure remains as murky as the water that runs beneath it. 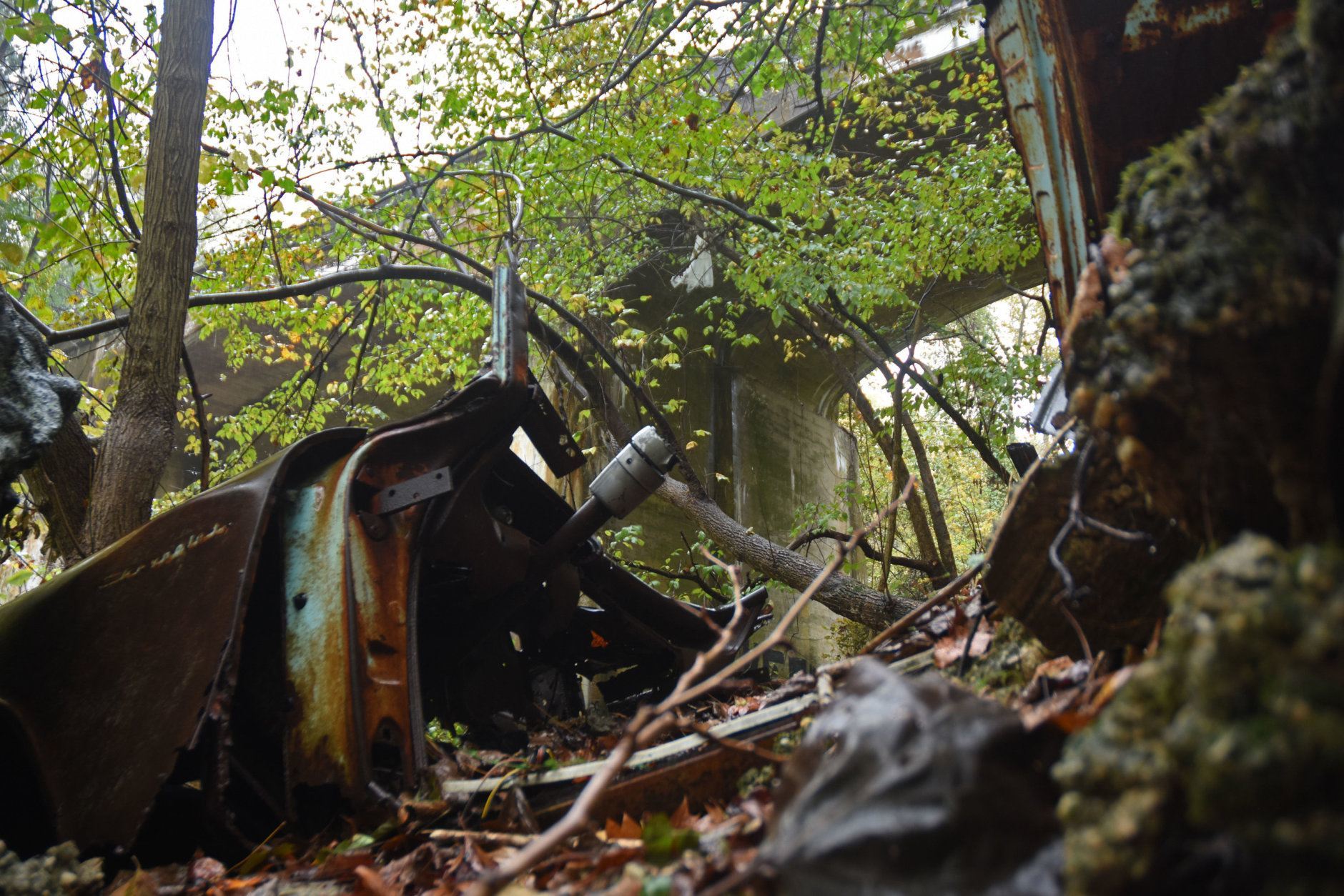 3/5
The husk of an old Chevy rusts in the shadow of Old Columbia Pike’s bridge at Paint Branch.

In 1999, the decommissioned portion of Old Columbia Pike was transferred from the State of Maryland to Montgomery County, but the bridge was specifically excluded from the agreement. The Maryland Department of Transportation has done routine inspections ever since.

Although the bridge and closed portion of Old Columbia Pike between Fairland and White Oak are not fit for motor travel, they remain open to foot traffic. Thistle and other plants spout from the macadam surface. The rusting husk of an old Chevy rests in the earth below the southern end of the span.

The rocky ruins of an even older crossing, one that dates back several centuries, can be seen beside the bridge. The juxtaposition of the structures, in various stages of decay, is a scene not unlike the ruins of the Jug Bridge, its predecessor, and present-day Old National Pike at the Monocacy River. 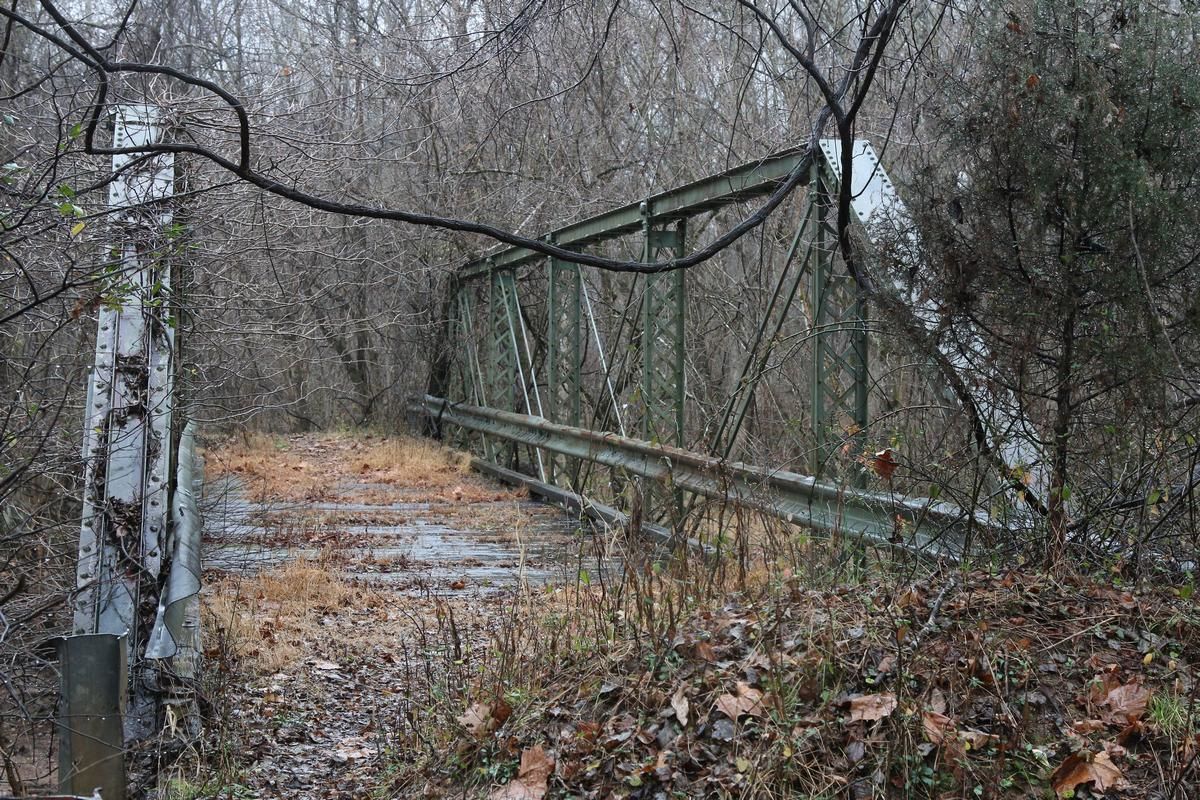 The remains of another centenarian structure can be found in rural Prince William County, Virginia.

In 1900, a steel truss bridge was erected over Cedar Run south of Aden. The 87-foot timber-planked bridge carried Fleetwood Drive over the creek for most of the 20th century.

Virginia Department of Transportation records indicate that the bridge was taken out of service in 1991 when it was replaced by a new two-lane bridge downstream. The state offered the bridge to any private parties that would relocate it. VDOT entered into an agreement with an interested party who planned to move the bridge to the base of the Old Rag Mountain, but the deal later fell apart. 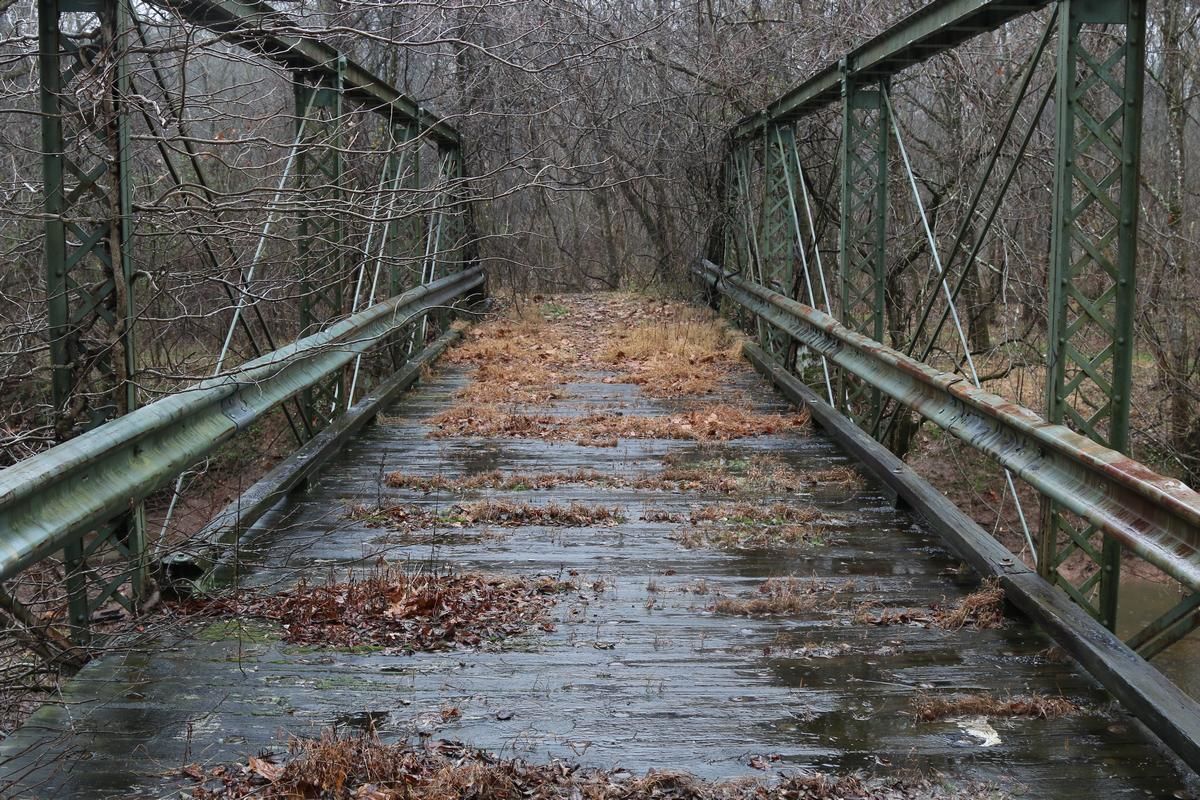 5/5
The bridge was closed in 1991 when a new two-lane bridge for Fleetwood Drive opened downstream.

The curved approaches of Fleetwood Drive on either side of the run are now buried in sediment and brush. Grass tussocks rise from the wooden bridge deck and vines crawl up its iron railings after years of abandonment.

Aging yet still standing, the bridges over Paint Branch and Cedar Run stand as monuments to generations of skilled laborers and engineers. The retired roads that lead up to their abutments are important reminders of how we got to where we are today — on the roads of decades past.