Indy, Sully, Jack, Lenny and Holmes have been on the job with police in Fairfax County, Virginia, since February. As the newest members of the force, they spent their first official public appearance on Tuesday rolling around on the floor, sniffing hands and licking the faces of small children.

The dogs are part of a new initiative, said Jay Carson, director of Incident Support Services. The five dogs — two chocolate Labradors, a yellow Lab and two golden retrievers — will be trained for two distinct jobs.

Three of the dogs are in training to become service companions for retired, disabled first responders. Carson said they’ll be placed with first responders from anywhere in the U.S., wherever the need is greatest.

Two other dogs will stay on in Fairfax County and will be deployed as part of a team when there’s an incident that’s especially stressful. 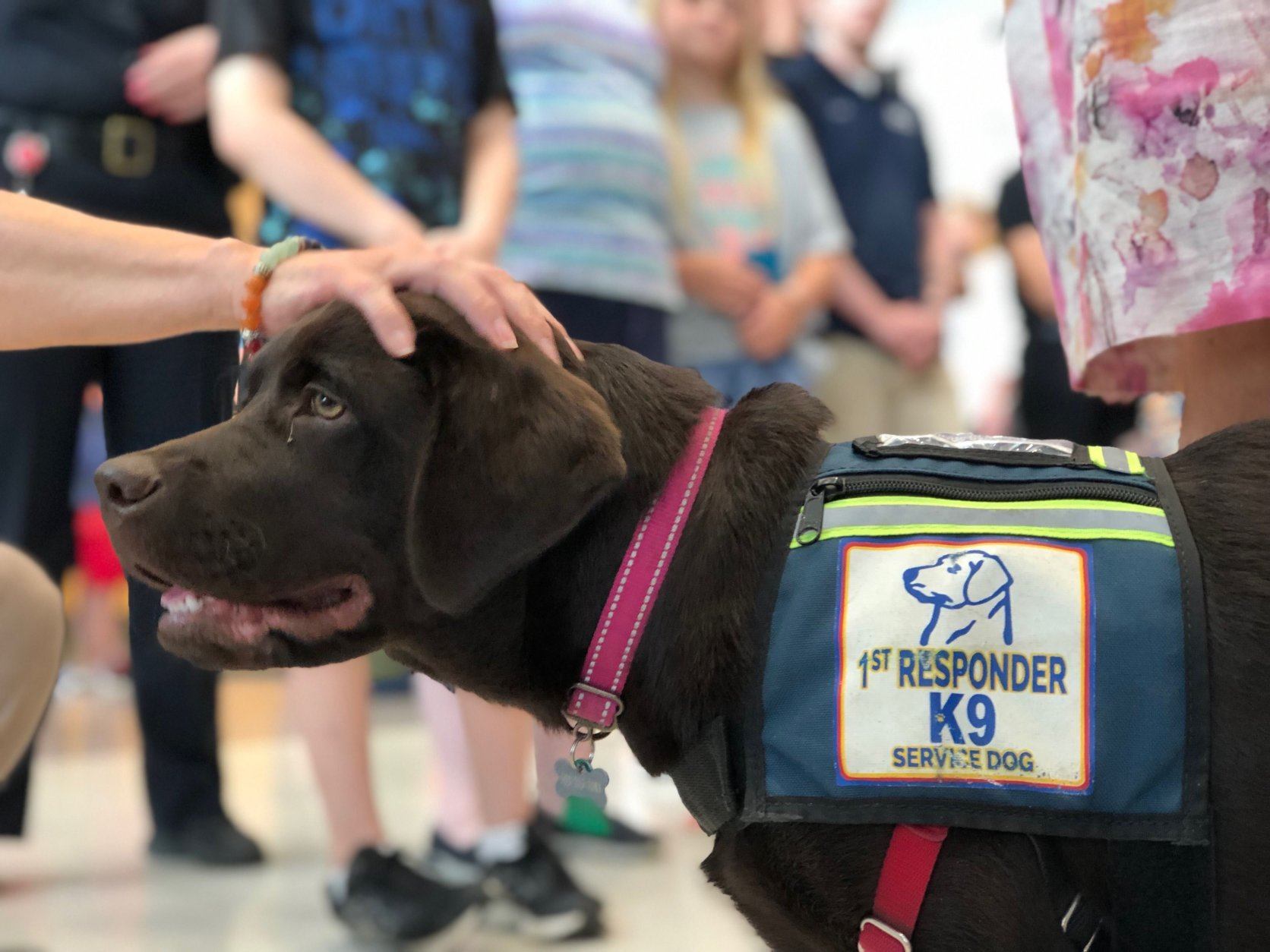 1/8
Sully is one of the new service dogs in training at the Fairfax County Police Department. He’s seen here on Tuesday, Aug. 13, 2019.

Right now, the dogs are getting basic training, Carson added. But they’re already having a positive effect among the officers, who find they’re great stress-relievers.

“I even joke around that they’re like library books — our guys want to check them out, take off with them for the day, take them down to their floors, and they’ll watch the dog all day,” Carson said. “Some of them are sending selfies with the dogs.”

Out in the field, when officers and detectives are handling an especially stressful or horrific event, the dogs are sent out.

“The officers stop what they’re doing. It grounds them a little bit; they’re able to interact with the dog and then they go back to work,” Carson said. 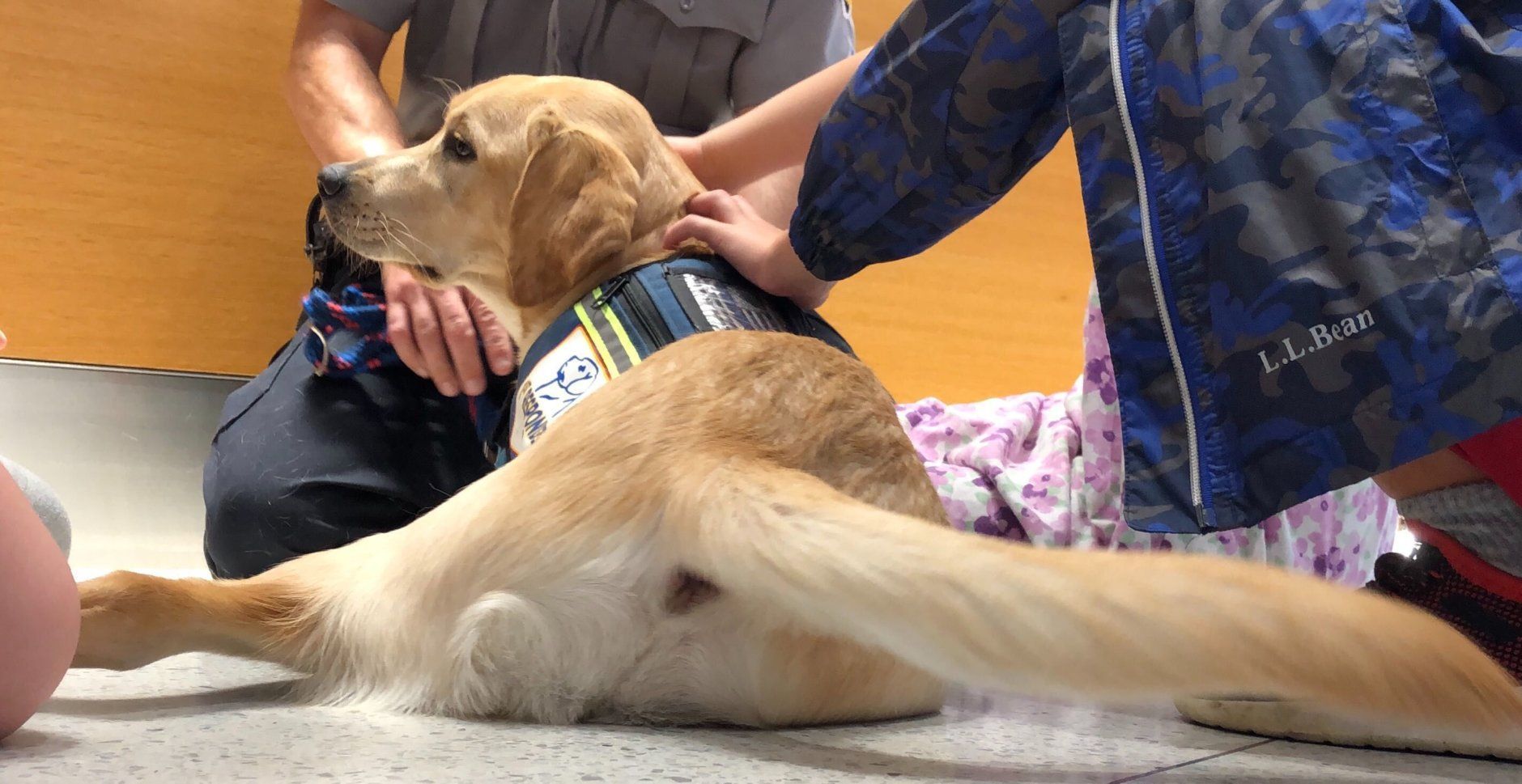 2/8
Here’s Lenny with her new friends on the floor of the police department’s Public Safety HQ in Fairfax, Virginia, on Tuesday, Aug. 13, 2019.

The dogs are also going to be available to members of the community on the scene of incidents as well, he added. “Especially if we have a case that involves children, or people who are emotionally upset after a horrific event,” Carson said. 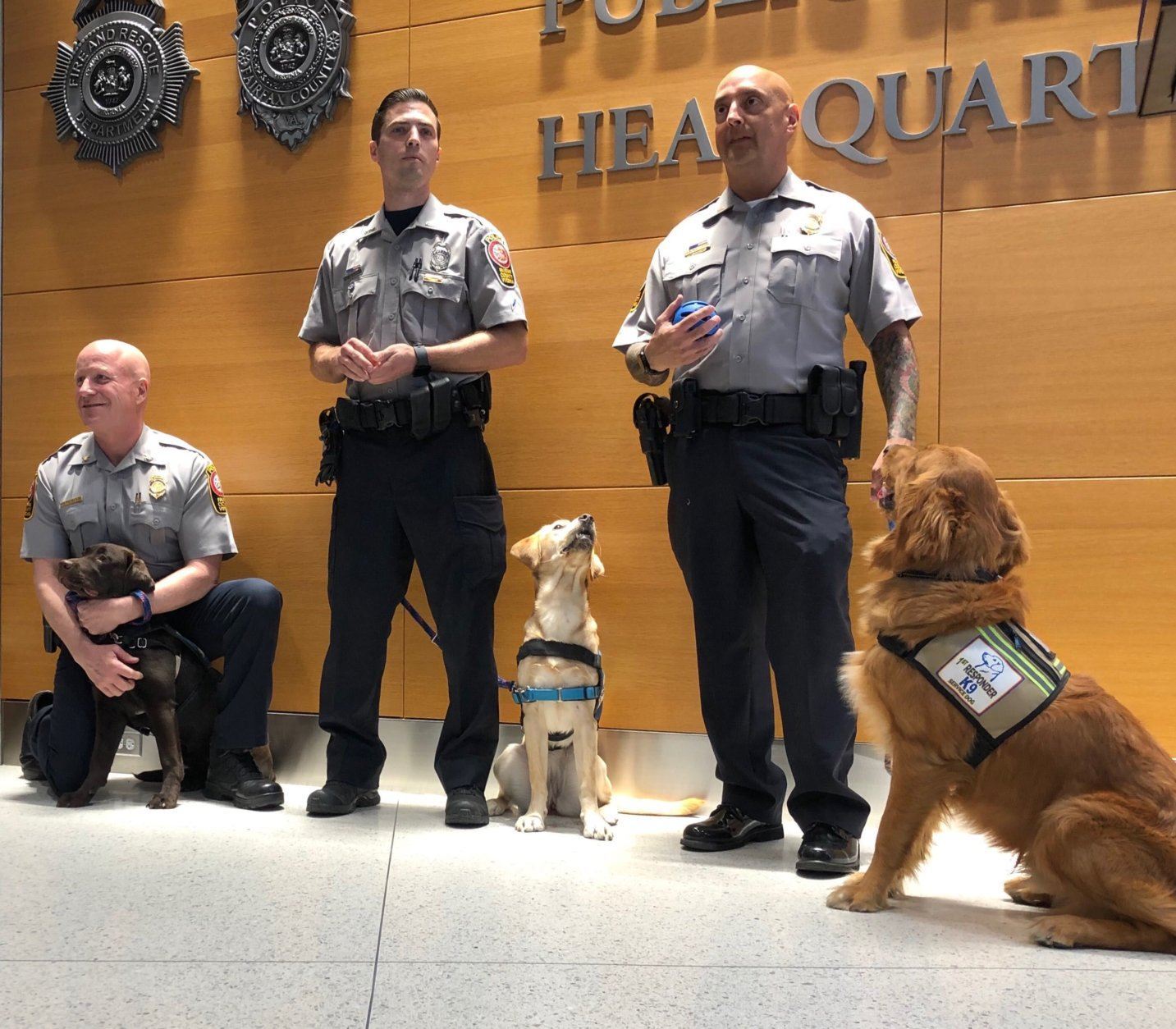 3/8
From left to right: Indy, Lenny and Jack, with their handlers. On the left is police Chief Ed Roessler, who is going to be training Indy round-the-clock.

Among those taking on a dog for training is police Chief Ed Roessler. He stood as his dog, a chocolate Lab named Indy, sat at his feet.

Roessler said Indy would eventually be placed with a disabled first responder.

He explained some of the skills she’ll have to master: “How to go up and down an escalator, how to ride in an elevator, how to turn a light on and off, how to retrieve her leash.”

And, perhaps, the most important skill: how to provide comfort for someone suffering post-traumatic stress, Roessler said.

“She provides a lot of love and joy,” he added. “She’s just fun and gives love.” 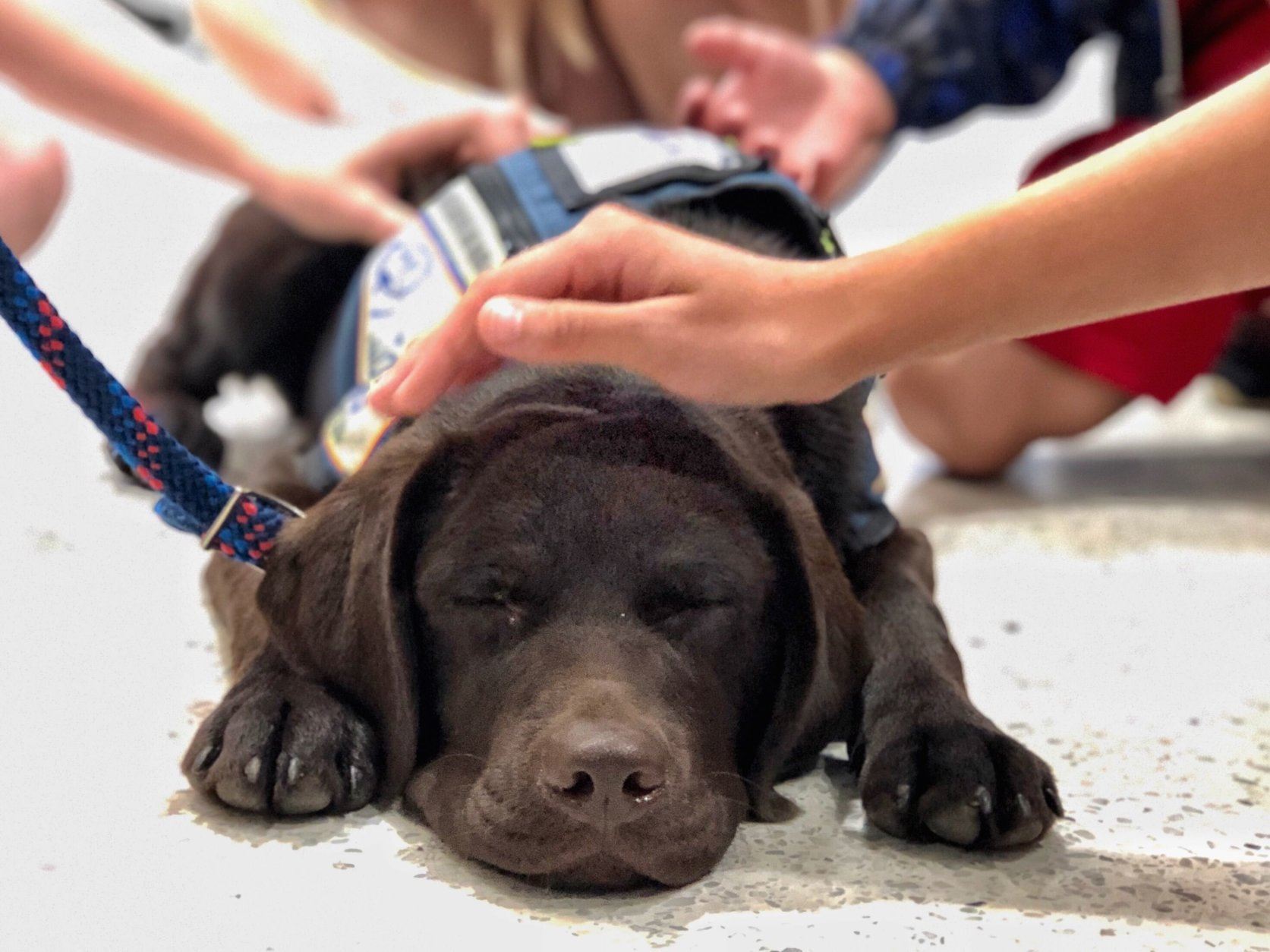 4/8
Here’s Sully, taking in all the love. He’s still in training, but he has nailed the calming presence requirement.

Another element of the program, Roessler said, is an effort to bring attention to mental health and suicide prevention.

“We respond to hundreds of suicides here in Fairfax County,” Roessler said.

He feels strongly about the need to eliminate the stigma that comes with asking for help when it’s needed — for first responders and the general public. The message, he said is, “It’s OK to not be OK — we will help you.” 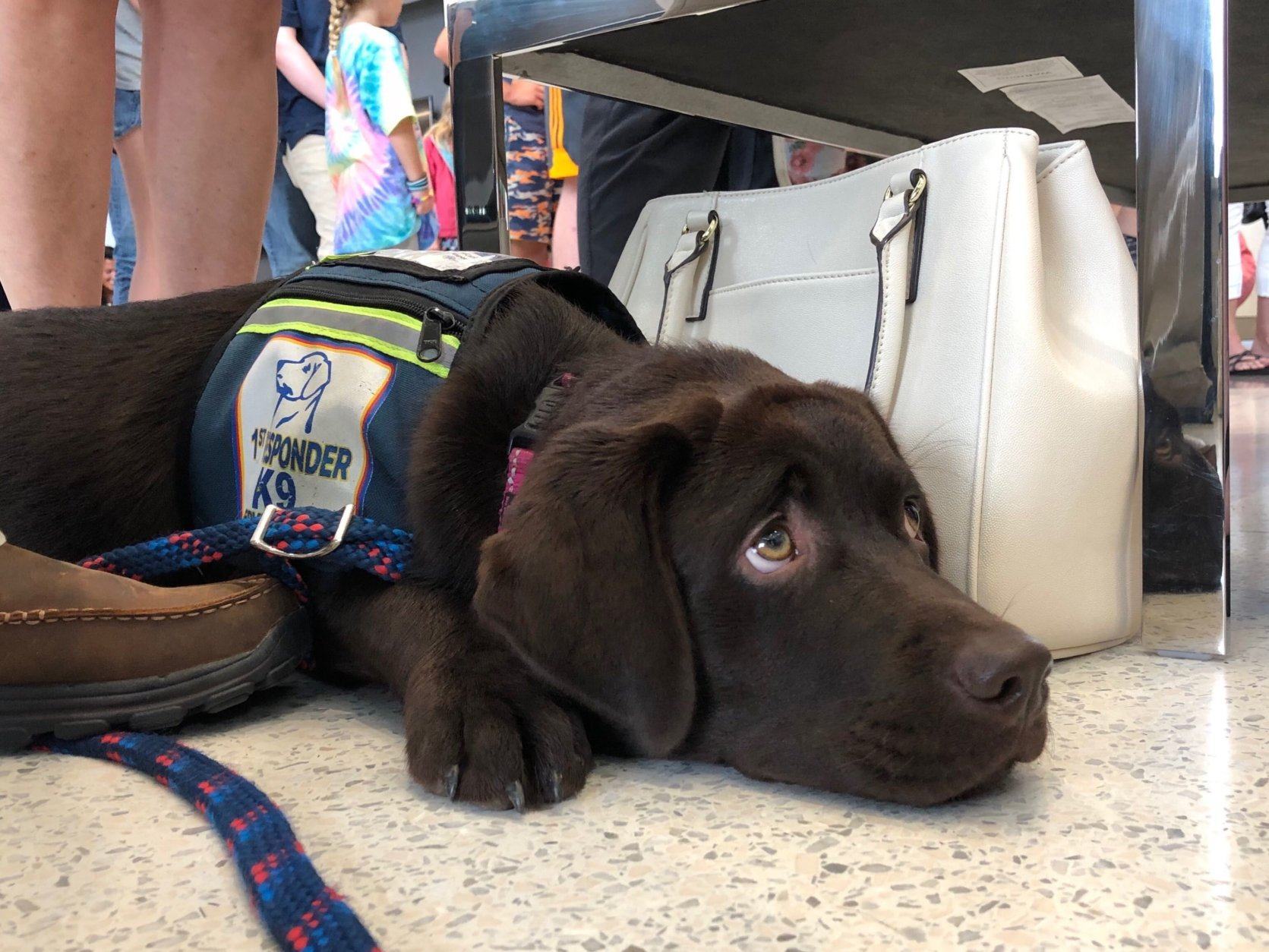 The event Tuesday morning was provided so that the department could publicize the program, and so that members of the community could meet the dogs. 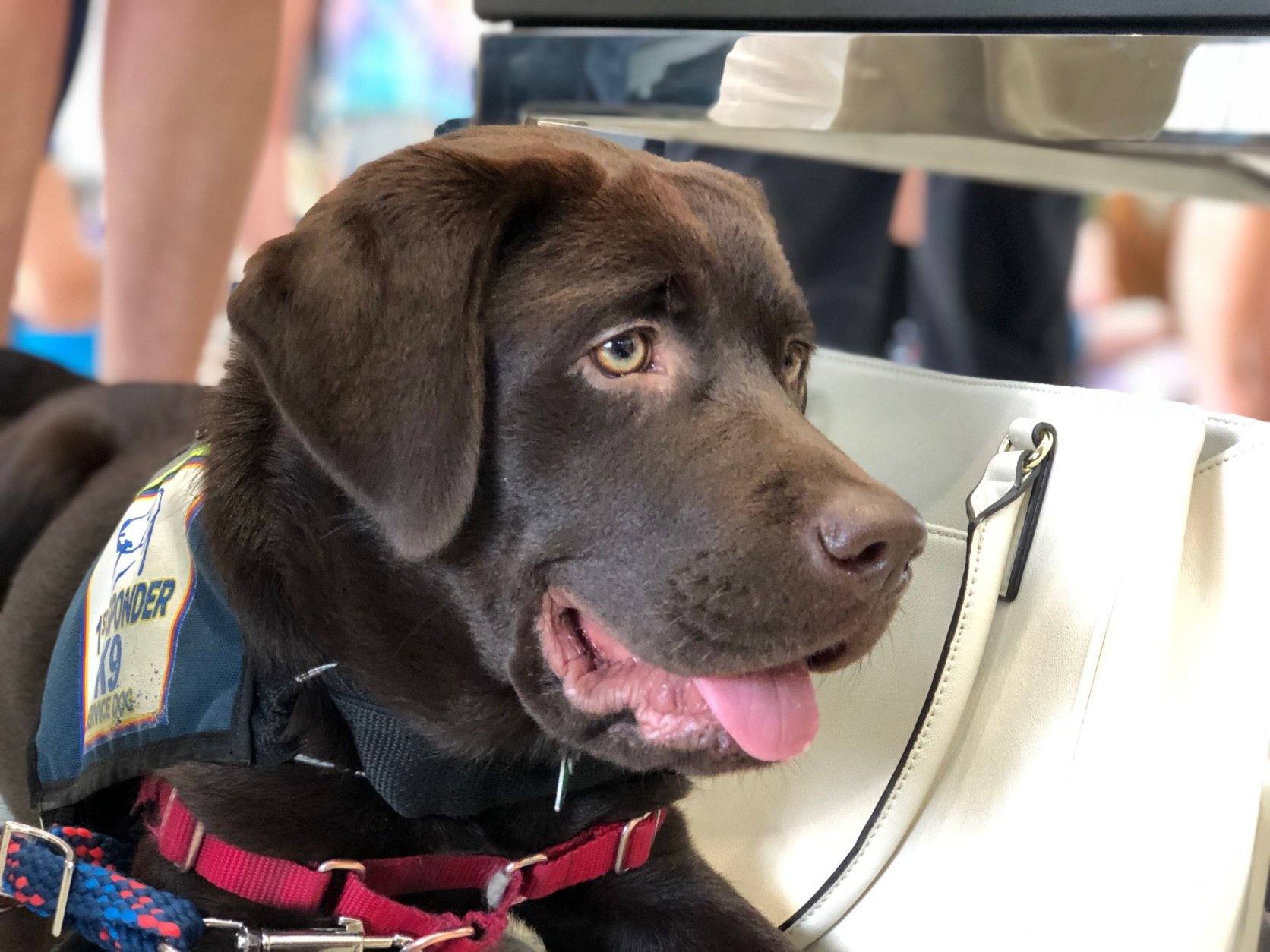 Brennan Welton, a 12-year-old from Fairfax, was thrilled to see the dogs. His favorite? Sully. “He’s energetic,” Welton said. “And I just like dogs!” 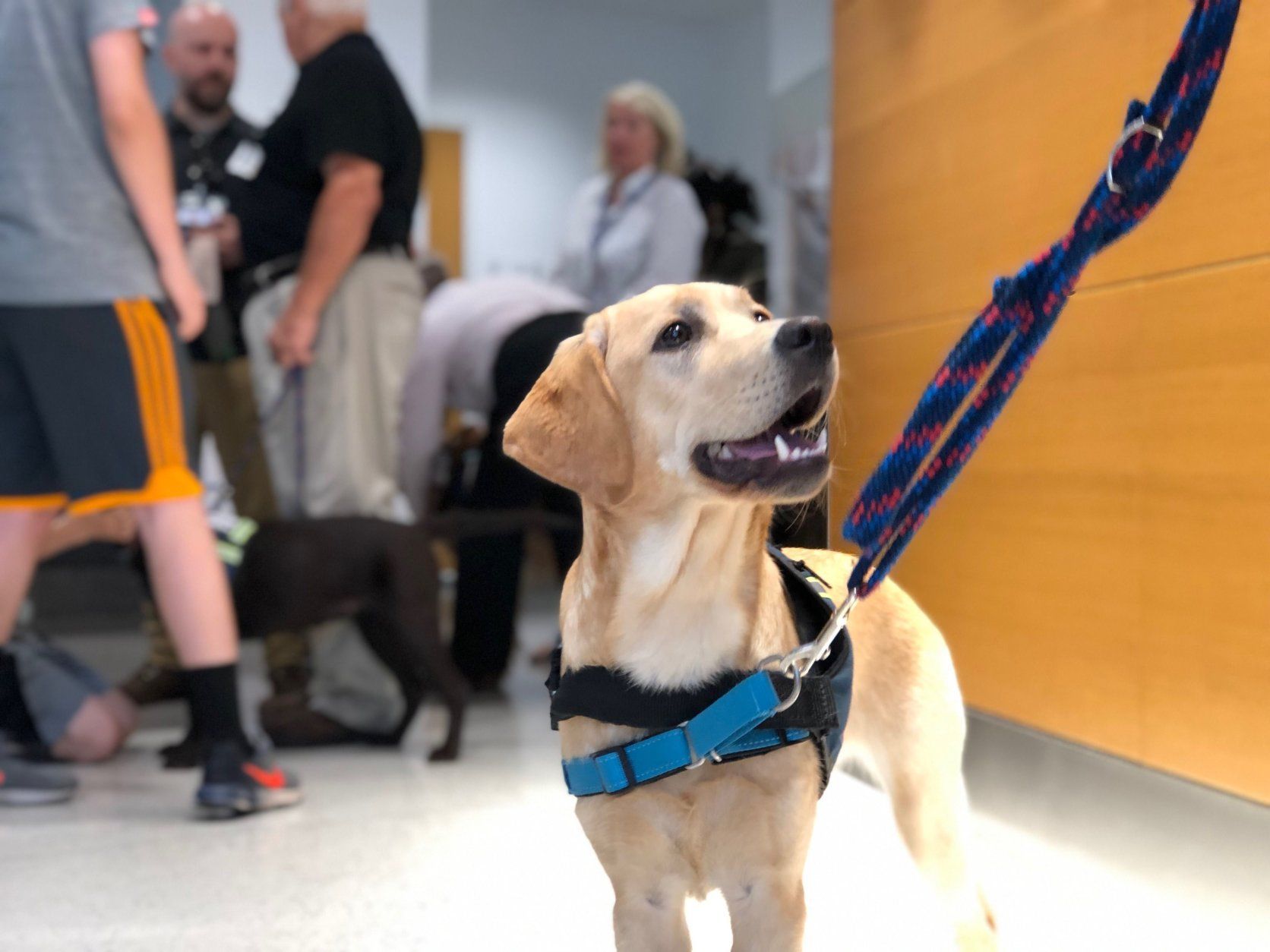 7/8
Lenny is also in training with the other specialized service dogs in the Fairfax County Police Department.

Holmes, one of the golden retrievers, was getting a lot of extra attention from Marian, Landon and Mitchell Spore. Their great-aunt, Jill Milloy, is a clinical psychologist with Fairfax County and is training Holmes.

Holmes is very talented, said 7-year-old Marian Spore. “When you have a treat, he sits, and then you say, ‘Say hello,’ and he’ll shake your hand.”

Older brother Mitchell Spore said Holmes is “very sweet and kind,” and after a bad day, it’s nice to spend time with Holmes. “He’s sweet and fluffy, and makes you calm,” the 11-year-old said.

Jack, a @FairfaxCountyPD service dog in training has clearly nailed the concept of a meet-and-greet pic.twitter.com/lH3Zq1VbLX