A WTOP reporter’s retrospective of the Capitol riots, one year later

There are some things that never leave you. What I witnessed unfold at the Capitol on Jan. 6, 2021, was seared into my memory. That day and the following weeks proved something I will never forget.

As a digital journalist for WTOP, I documented the event in real-time with photos and videos, from the initial rally near the White House to the retaking of the Capitol grounds by police that evening. Needless to say, a lot has happened in the year since I first sat down and wearily tried to bundle up what I’d seen for our audience.

More than 700 rioters have been charged in the storming of the U.S. Capitol building, many of them through self-incriminating social media posts surfaced by a thriving ecosystem of online citizen sleuths — it turns out the invasion of Capitol Hill was probably one of the most well-documented criminal acts in American history.

I often get asked where I was when I realized that the Capitol building had been breached. One of the challenges of being a field reporter in a rapid-fire news situation is that you’ve sometimes only got eyes on what’s immediately around you. While someone watching at home might have seen the evacuation of Congress live on television, the reality of what was happening dawned on me bit by bit as I moved along the National Mall.

It was a slideshow of horror: the thunderous clap of concussion grenades echoing across the Mall; the sight of security barricades co-opted as medieval-style ramparts to rush over ledges on the Capitol’s west lawn; the yells of rioters mustering manpower to ram a Trump campaign banner a police lines; the unmistakable acrid scent of pepper spray and tear gas, drifting down from the Capitol steps.

With sparse cell reception, I worked my way to the front of the crowd where Trump supporters climbed atop the scaffolding in place for the upcoming inauguration. A set of double doors at the base of the Capitol’s west front had been torn open. It was nightmare manifest: They had gotten in.

Those are just a few of the moments I still remember vividly. But I soon found out my vantage point from the relative safety of the lawn had been nothing compared to what my colleagues trapped within the Capitol had seen and felt. Every reporter contributes to the bigger picture, and learning of other perspectives after covering a major story on the ground can be a shocking and revelatory experience of its own.

It wasn’t until later that night that I first saw images of Officer Eugene Goodman diverting an oncoming mob from the Senate chamber, rioters vaulting over balconies with plastic cuffs, a melee breaking out in the Capitol rotunda and police drawing their firearms at the House doors. It’s been a year and I’m still coming across footage I hadn’t seen before.

Even as someone who bore witness to that day’s chaos, much of it is gut-wrenching to view. Even these words are difficult to write.

Washington didn’t catch a break for months. Thousands of armed National Guard troops from across the country fortified Capitol Hill and split city blocks with reinforced fencing amid questions over prior inaction and fear of what would come next. When I returned the following week, I photographed shattered windows covered with plywood and soldiers transporting crates of ammunition through the halls of Congress.

It wasn’t until July that the last segment of fencing on First Street came down and some semblance of normalcy returned to the area. But renewed security before a late summer rally supporting jailed rioters served as a reminder that the city remains only one threat away from a return to lock down. The memory of Jan. 6 simmers, painfully. That is our world now.

Below are some of the images I captured on Jan. 6, 2021, and the weeks that followed. See more photos from the day here. 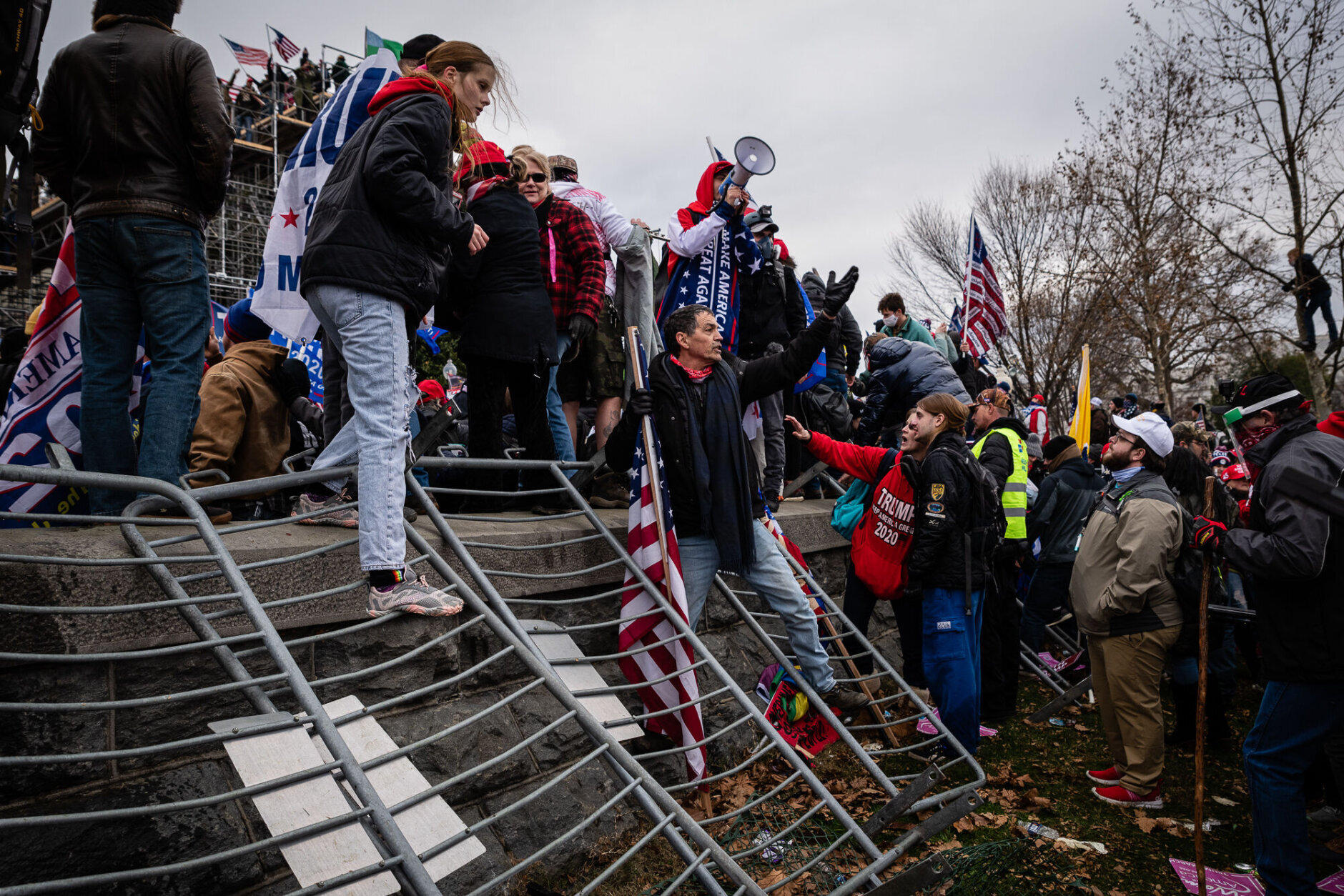 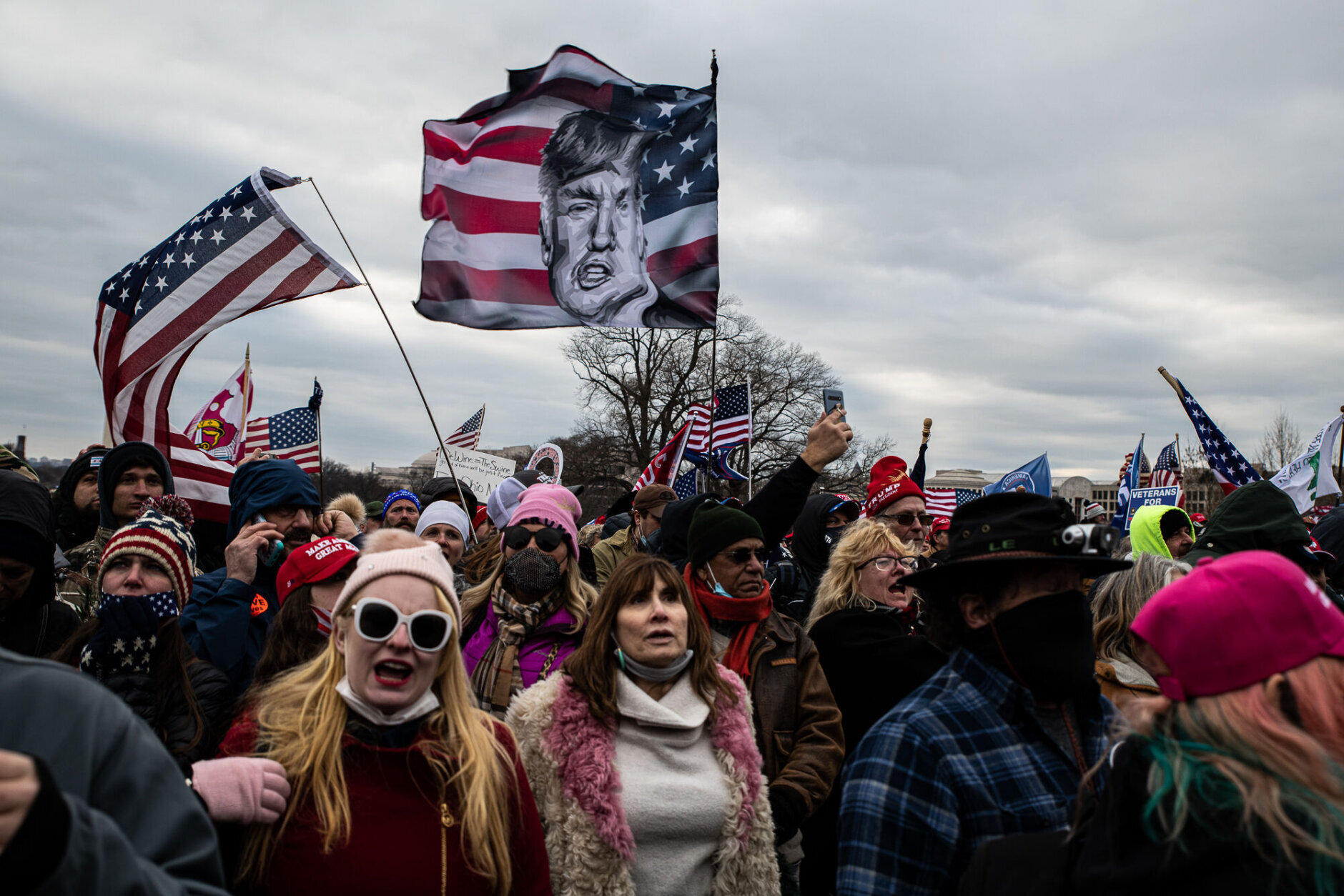 2/18
Trump supporters cheer and yell on the National Mall as rioters rush at police outside the Capitol’s west front. (WTOP/Alejandro Alvarez) 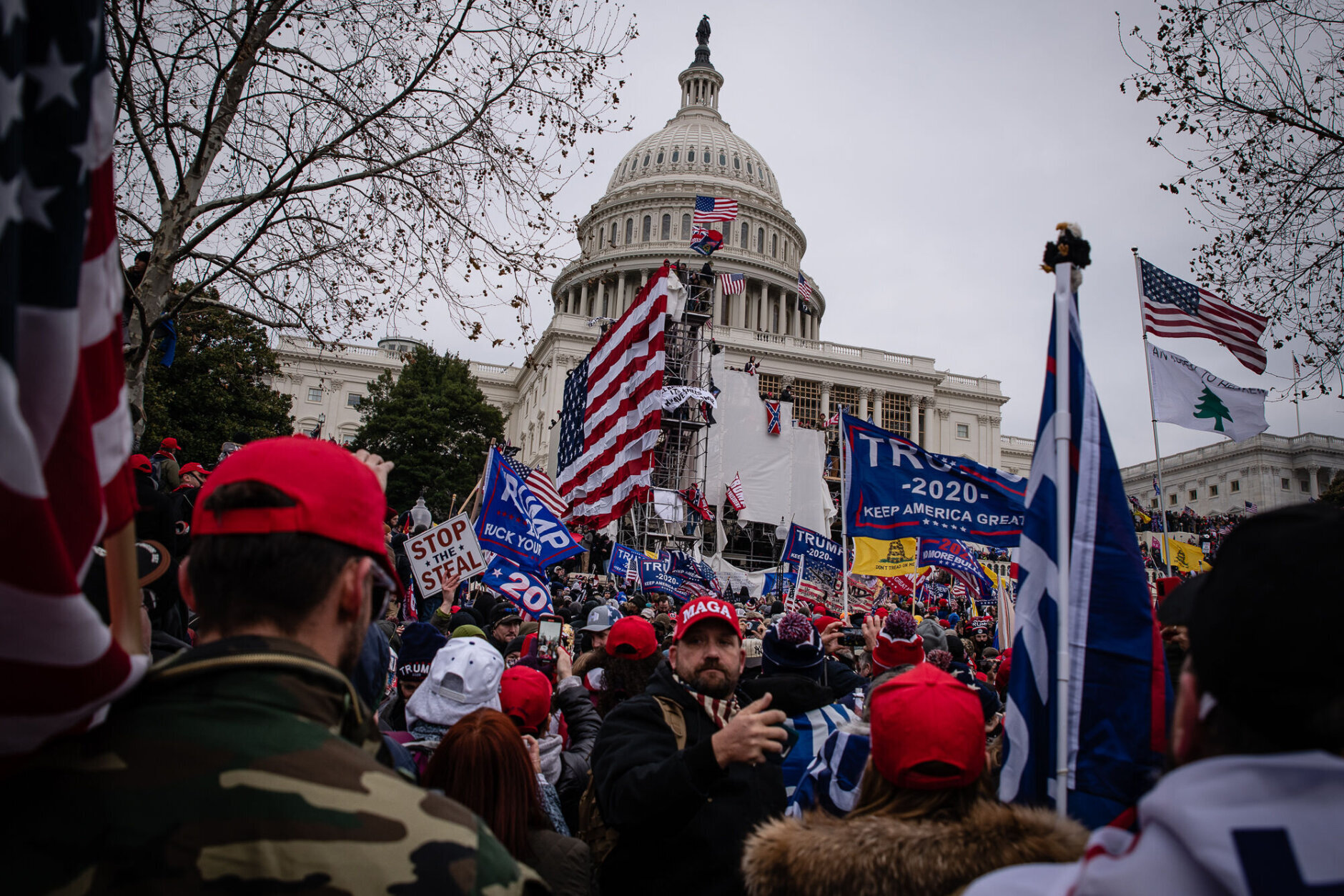 3/18
A crowd gathers outside the Capitol’s west front as rioters fix Trump campaign banners from scaffolding in place for the upcoming presidential inauguration. (WTOP/Alejandro Alvarez) 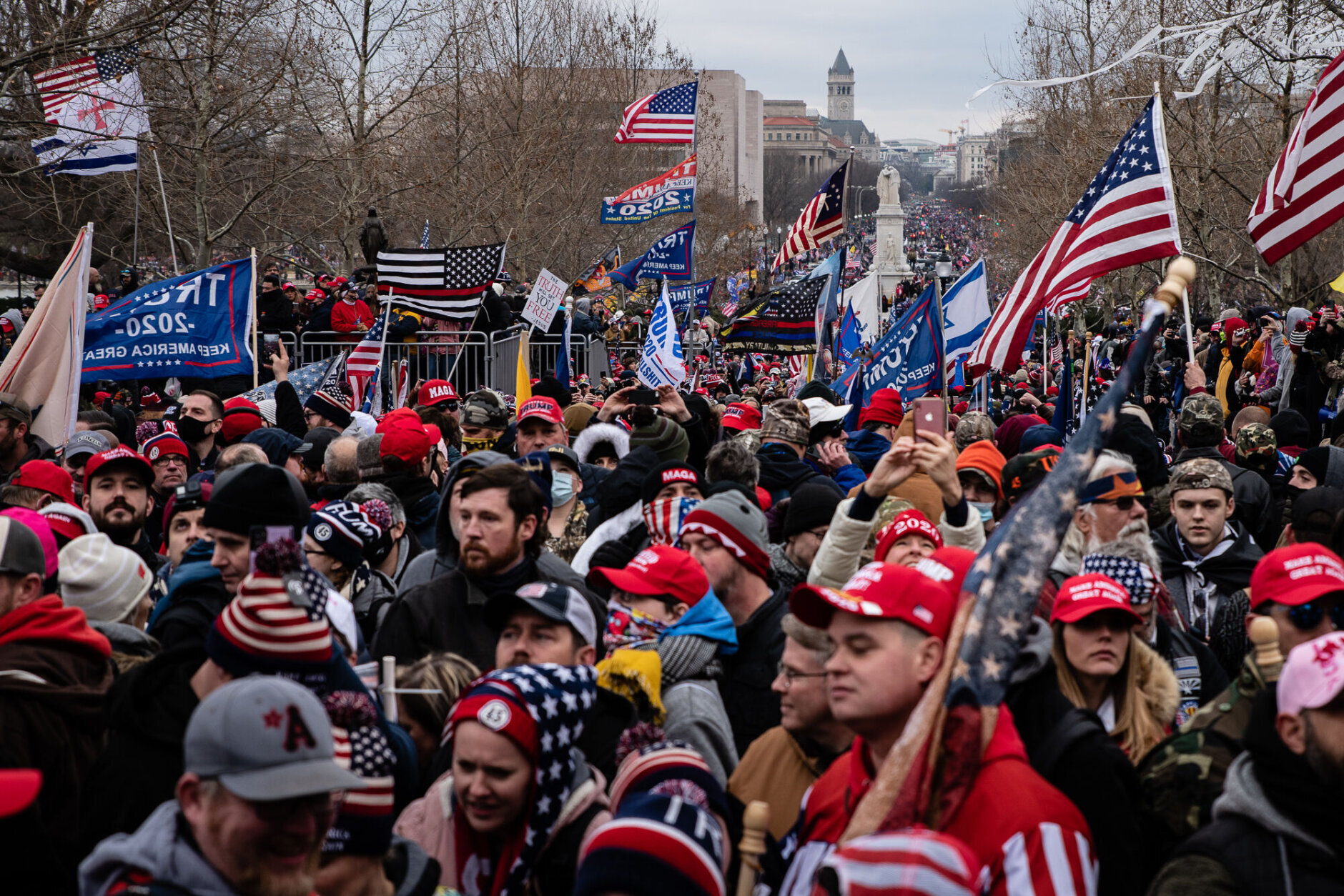 4/18
Thousands, stretching back down Pennsylvania Avenue, watch the storming of the Capitol building. (WTOP/Alejandro Alvarez) 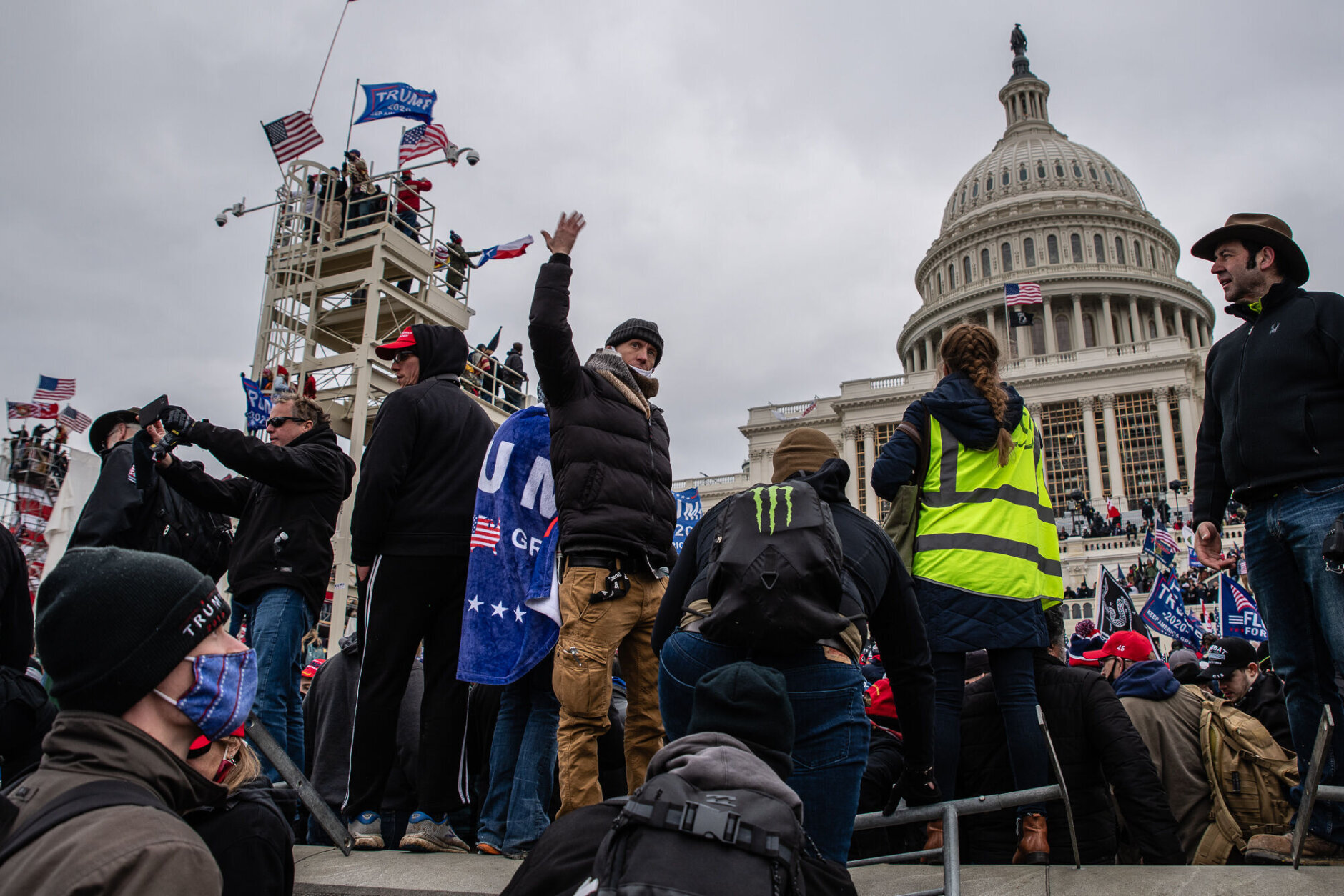 5/18
A man beckons the crowd to approach police lines beneath the Capitol’s west steps. (WTOP/Alejandro Alvarez) 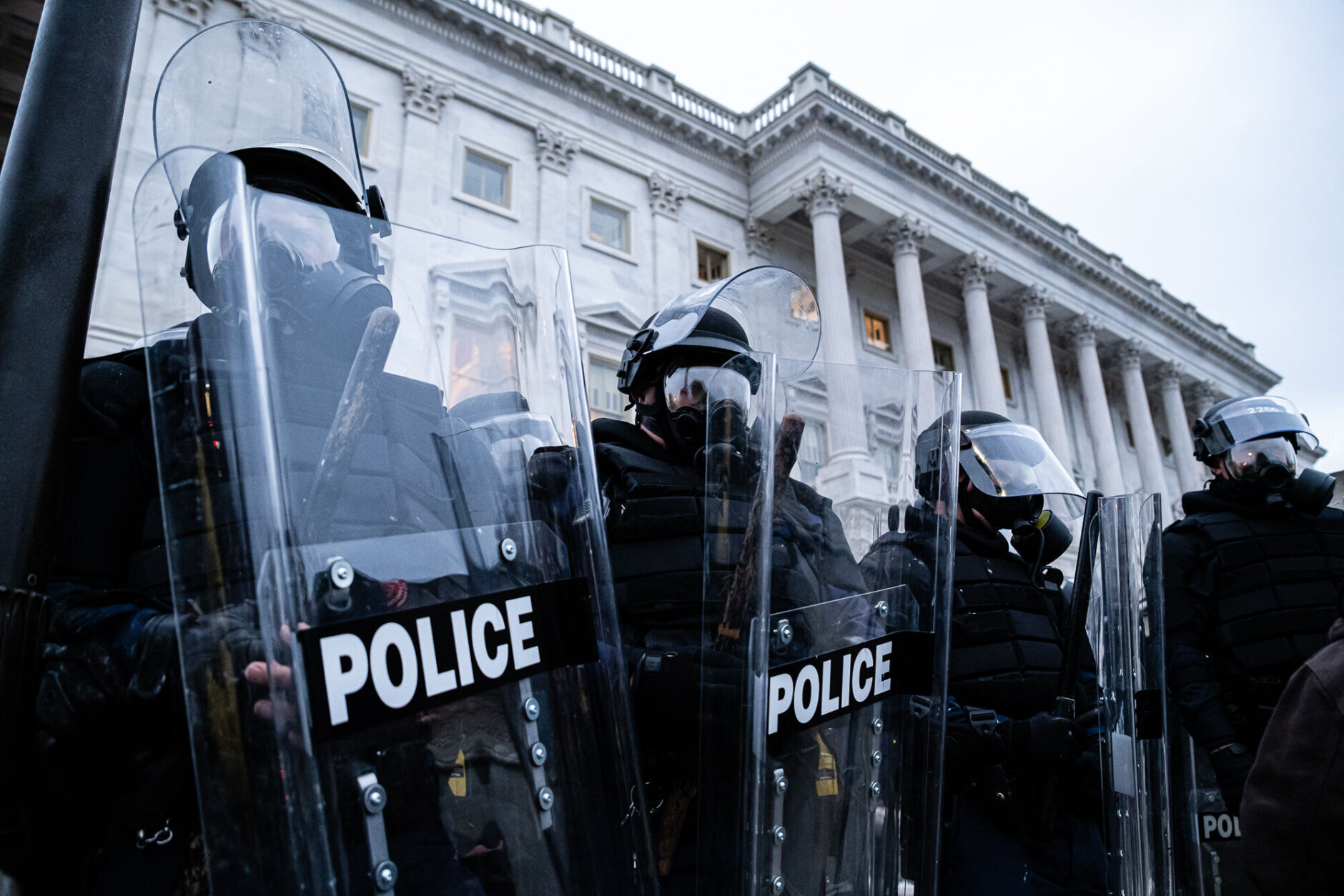 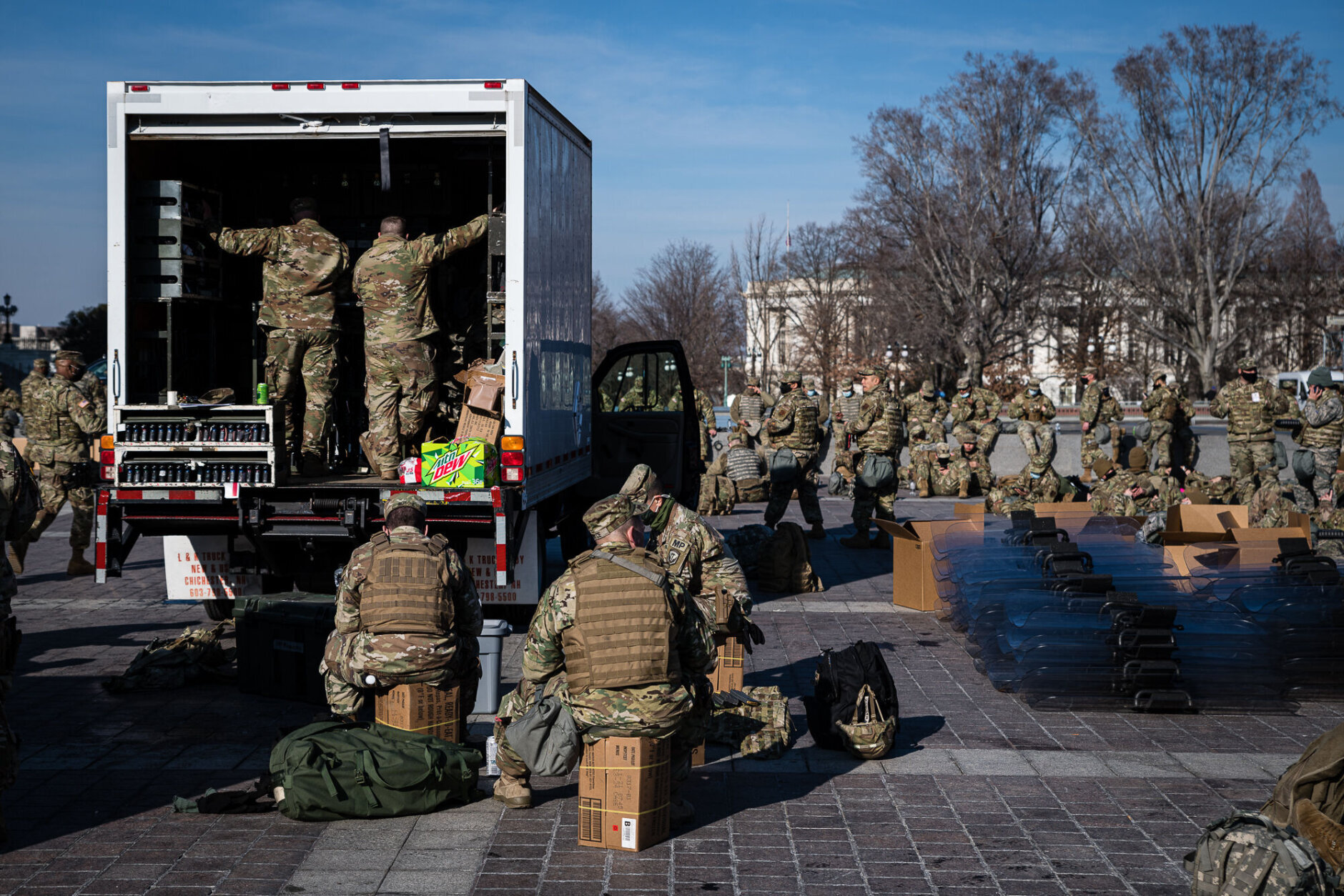 7/18
Members of the National Guard stage in the Capitol’s east plaza on Jan. 13. (WTOP/Alejandro Alvarez) 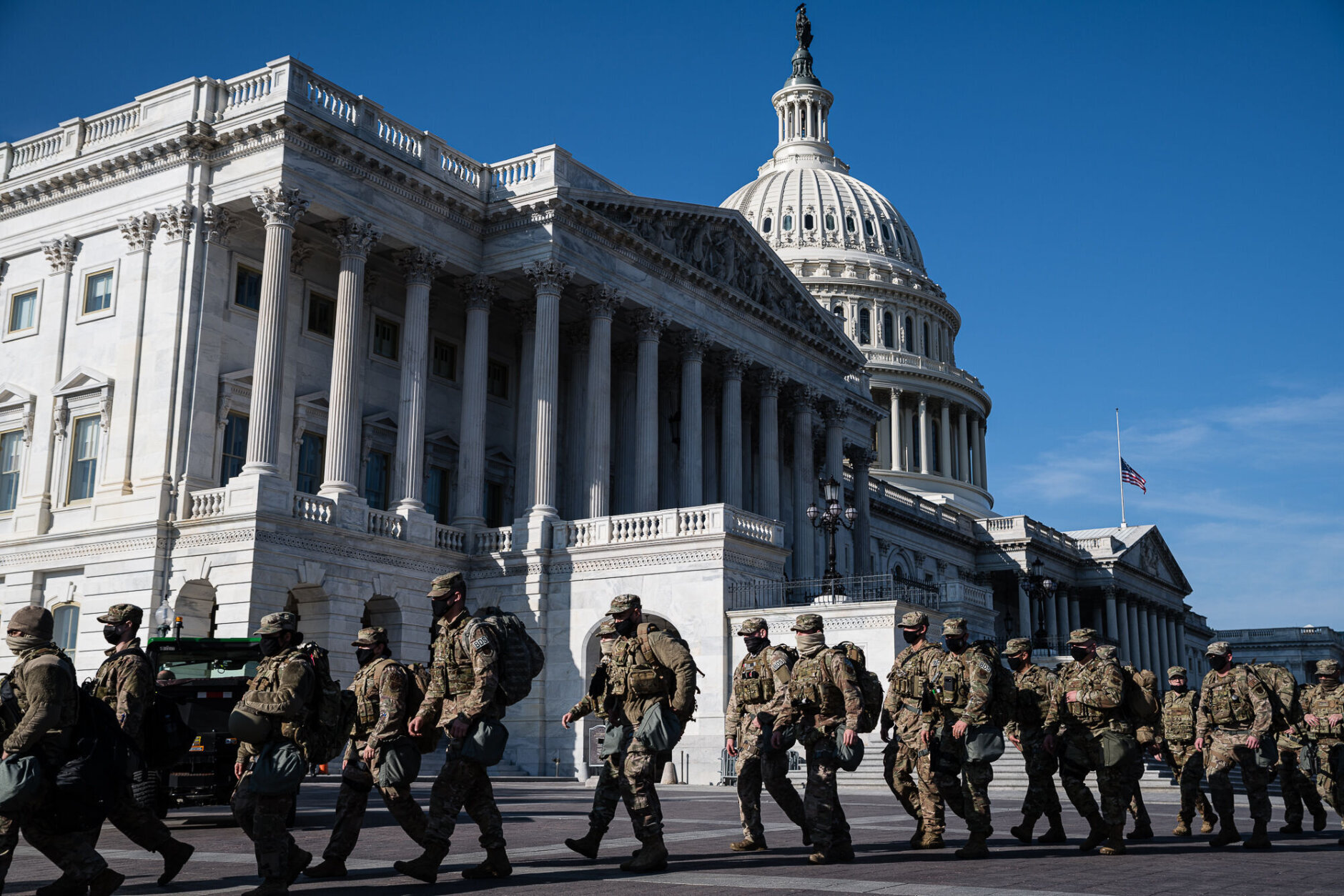 8/18
National Guard troops arrive at the Capitol as part of a multistate deployment to reinforce security in the weeks and months that followed the insurrection. (WTOP/Alejandro Alvarez) 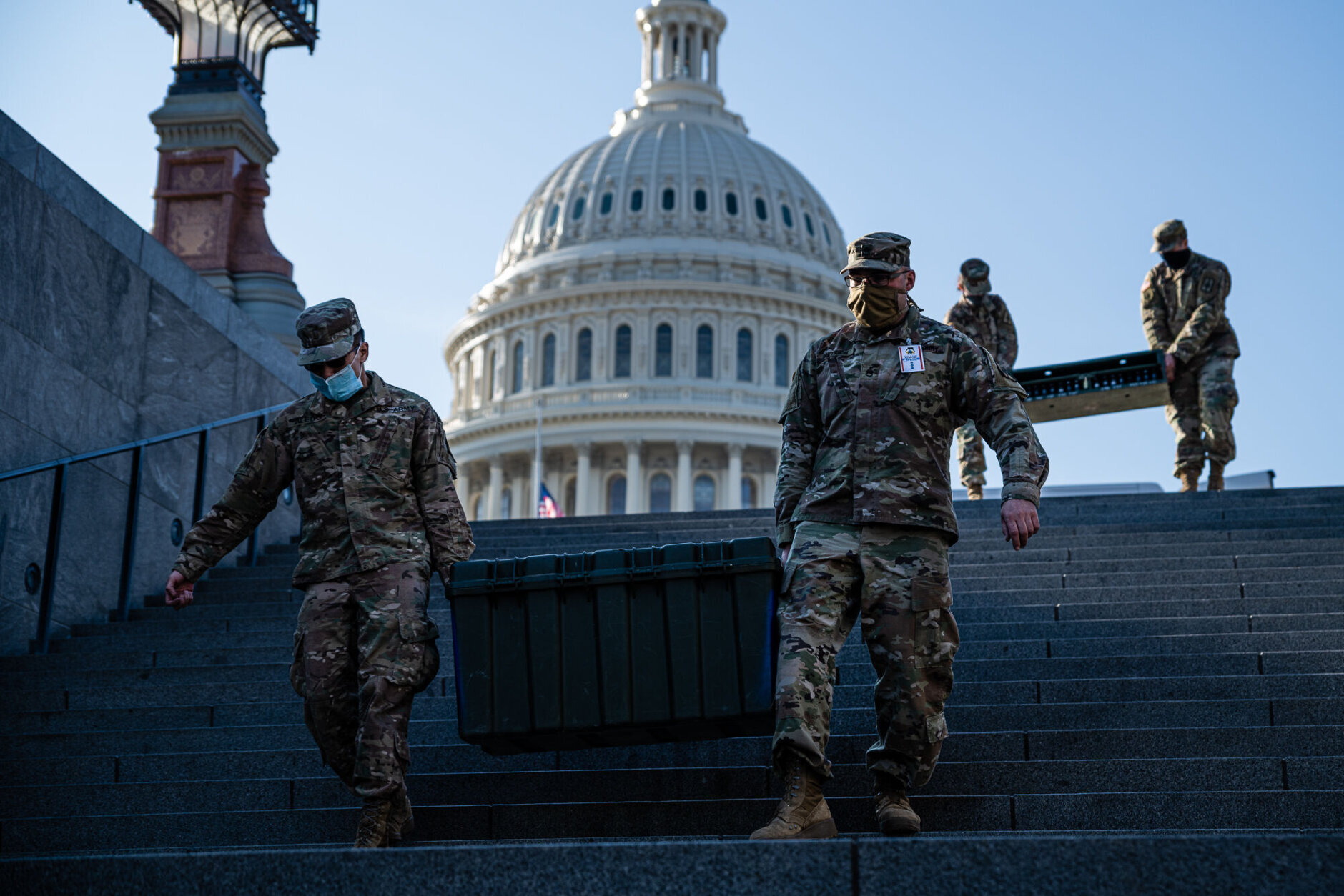 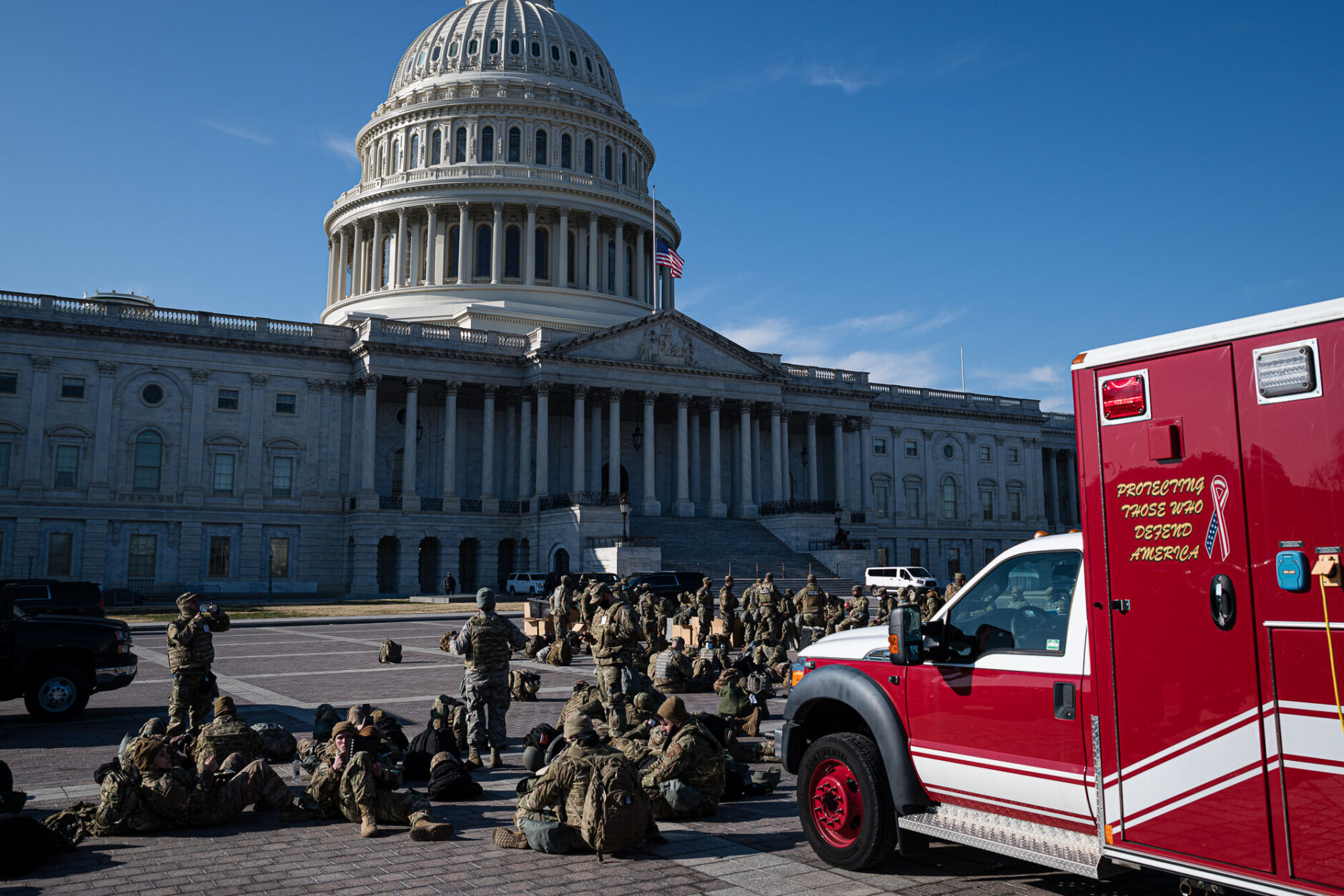 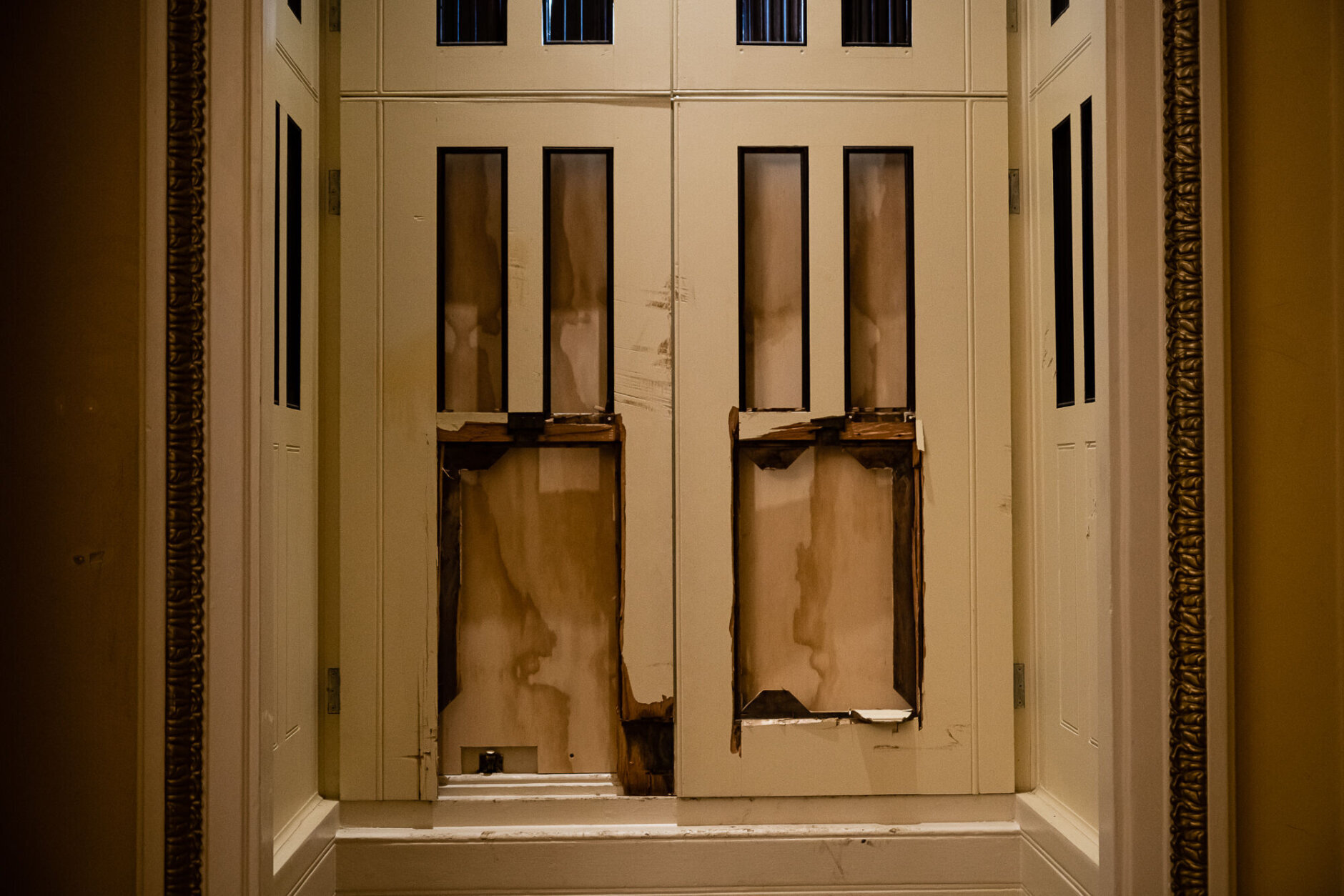 11/18
Plywood covers a window on the Capitol’s Senate side two weeks after rioters breached it to invade the building. (WTOP/Alejandro Alvarez) 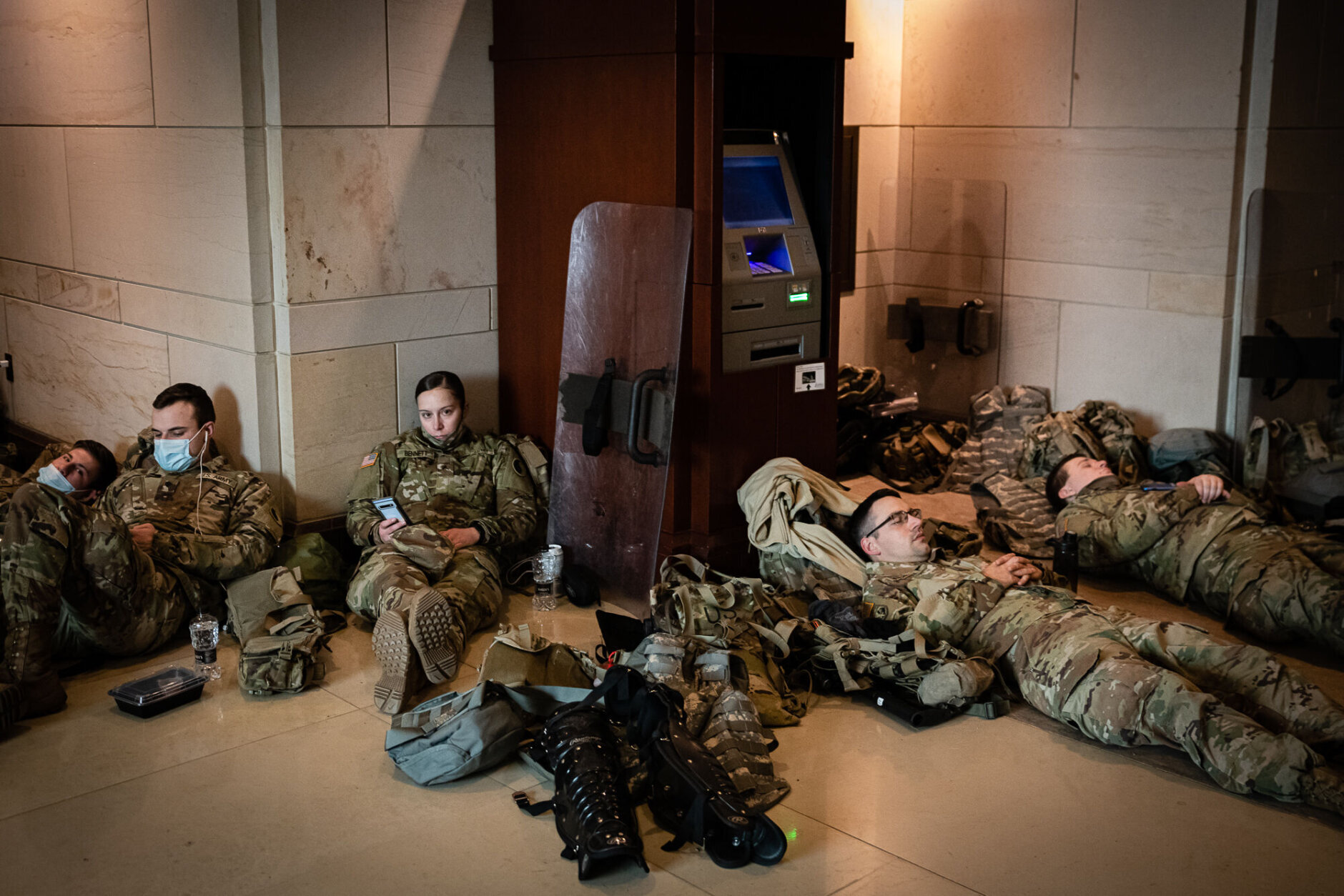 12/18
Members of the National Guard rest next to an ATM in the Capitol visitor center on January 13. (WTOP/Alejandro Alvarez) 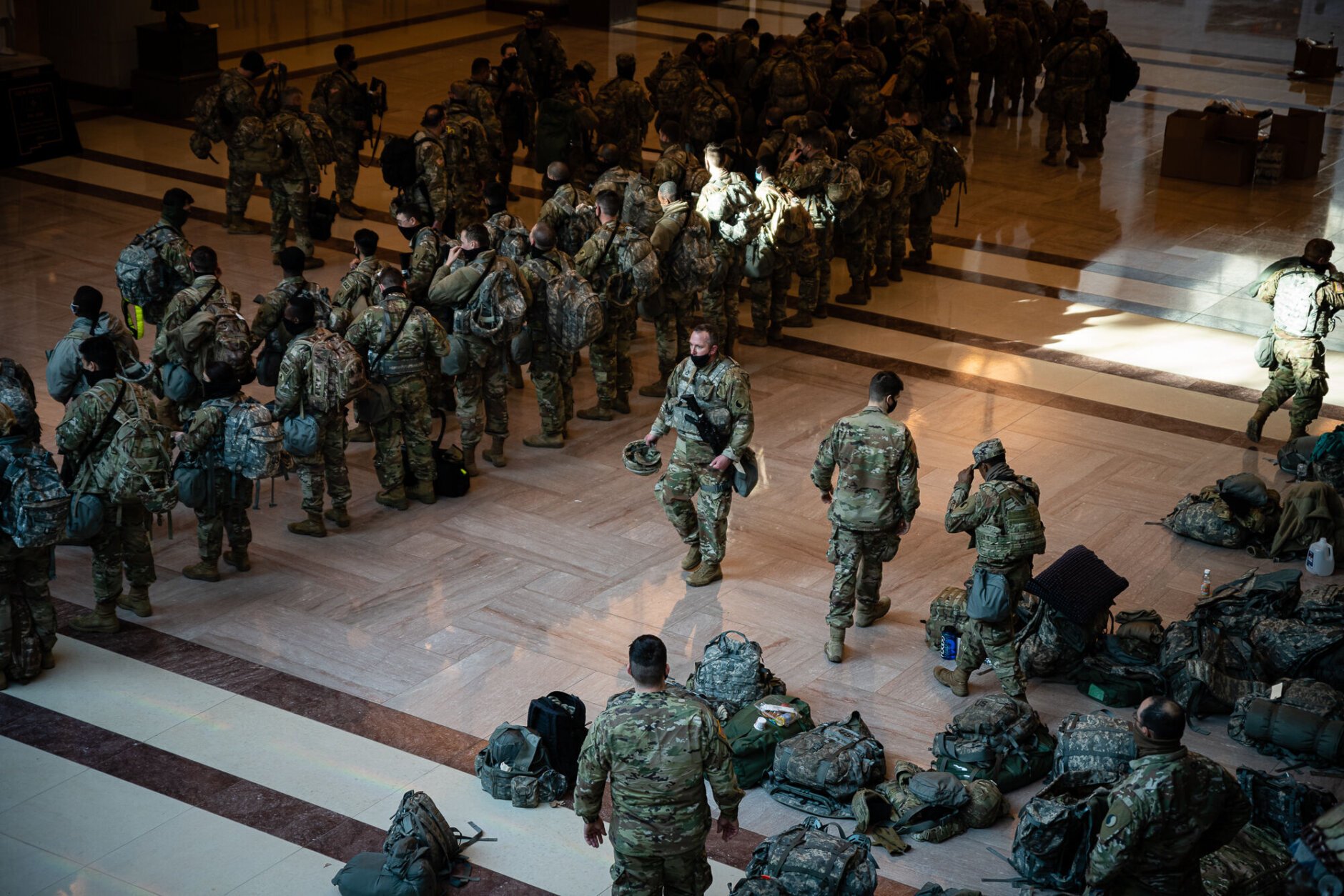 13/18
With thousands of troops using the halls of the Capitol for sleep and rest, the visitor’s center is converted into a makeshift staging area for soldiers arriving from across the country. (WTOP/Alejandro Alvarez) 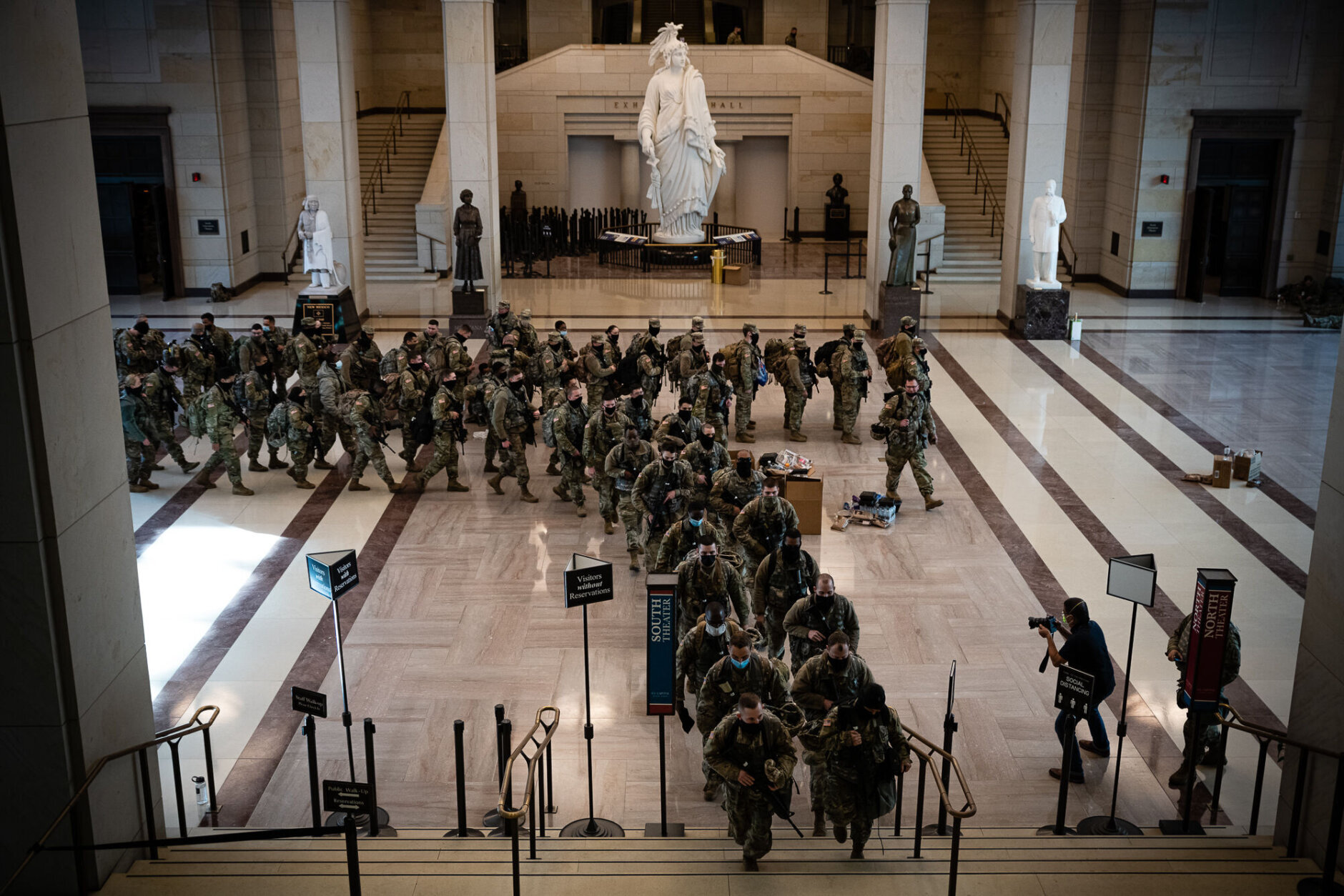 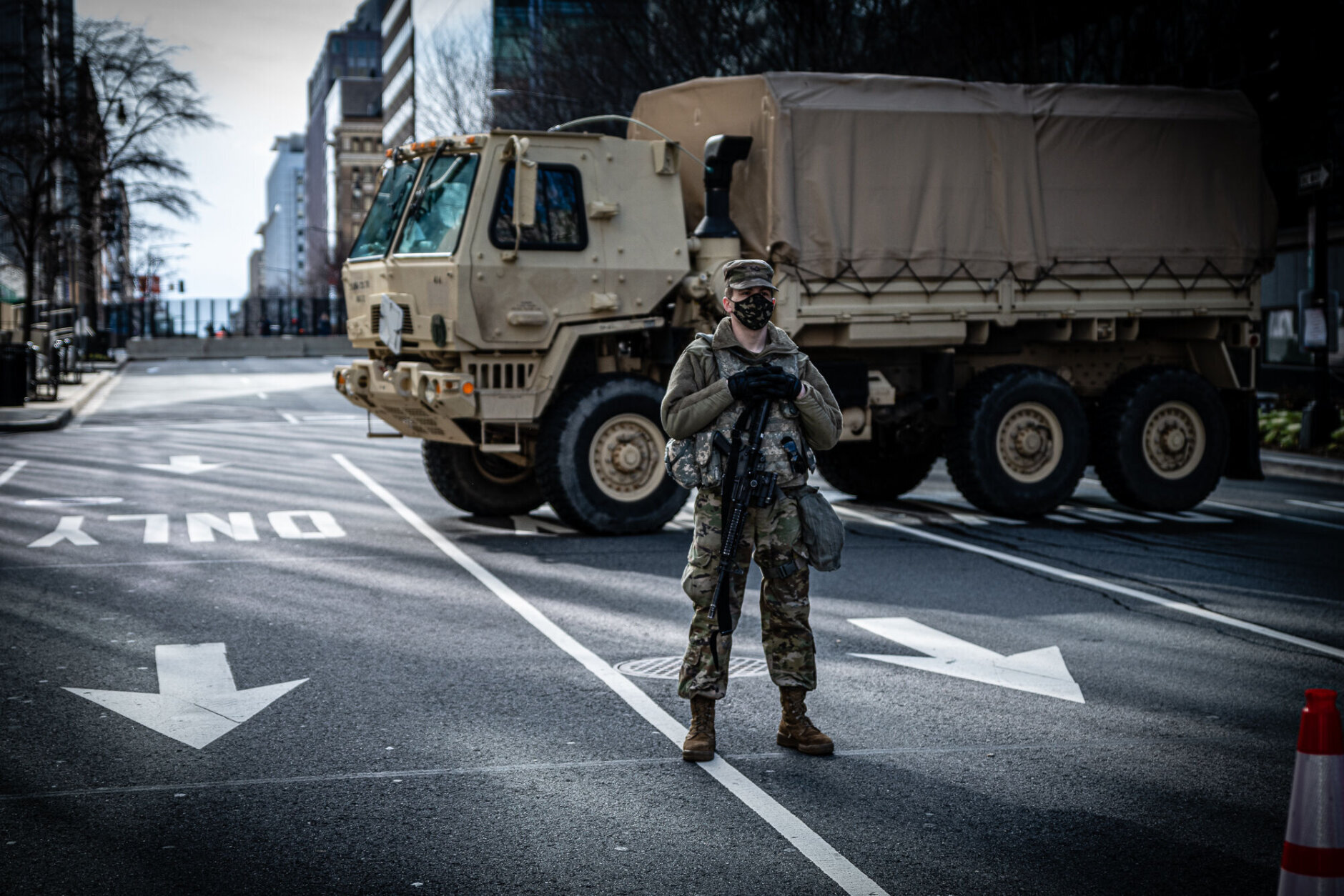 15/18
A member of the National Guard mans a roadblock in downtown D.C. on the morning of Joe Biden’s inauguration. (WTOP/Alejandro Alvarez) 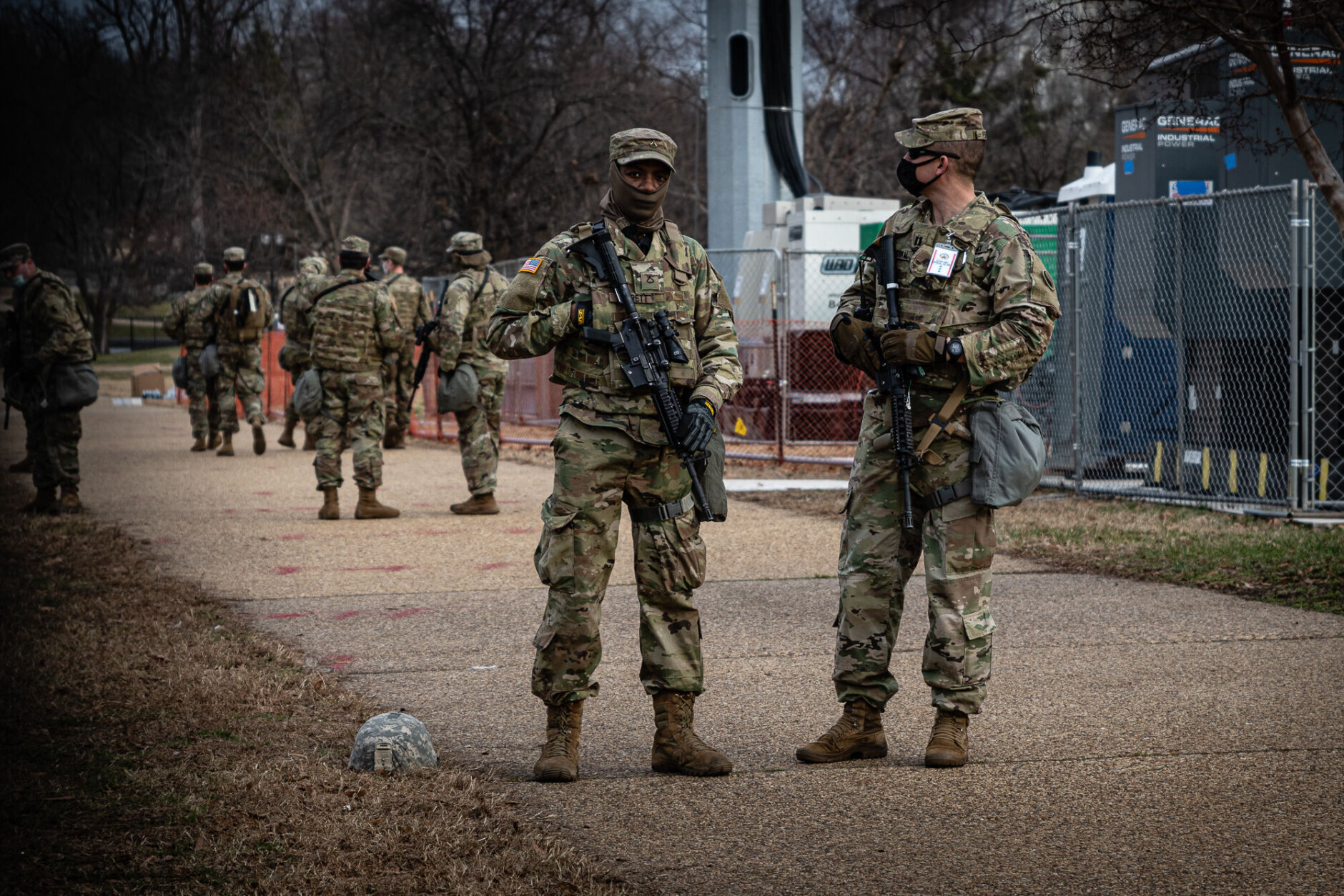 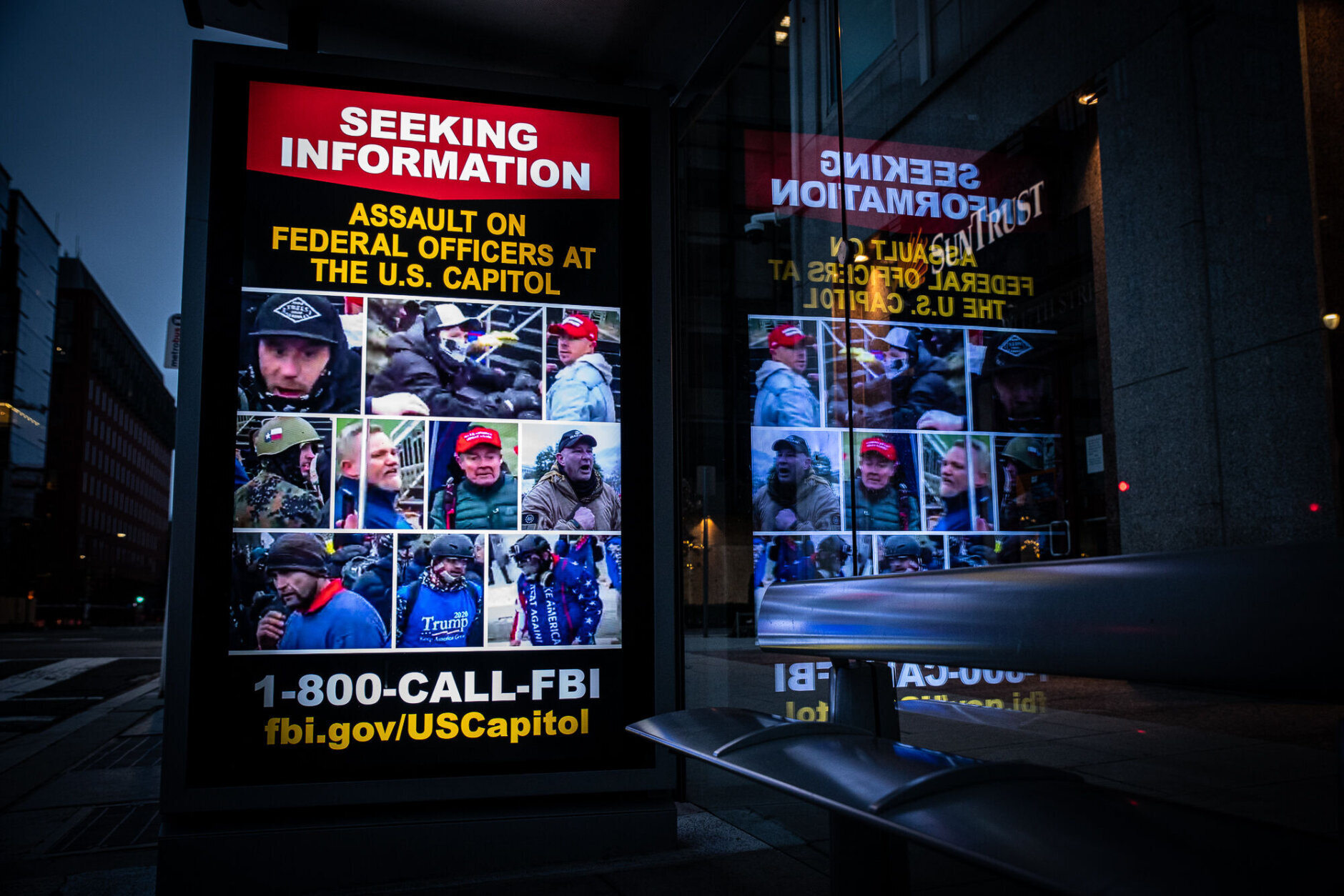 17/18
On Joe Biden’s first night as president, an electronic billboard at a Metrobus station on Connecticut Avenue makes an appeal for information on rioters. (WTOP/Alejandro Alvarez) 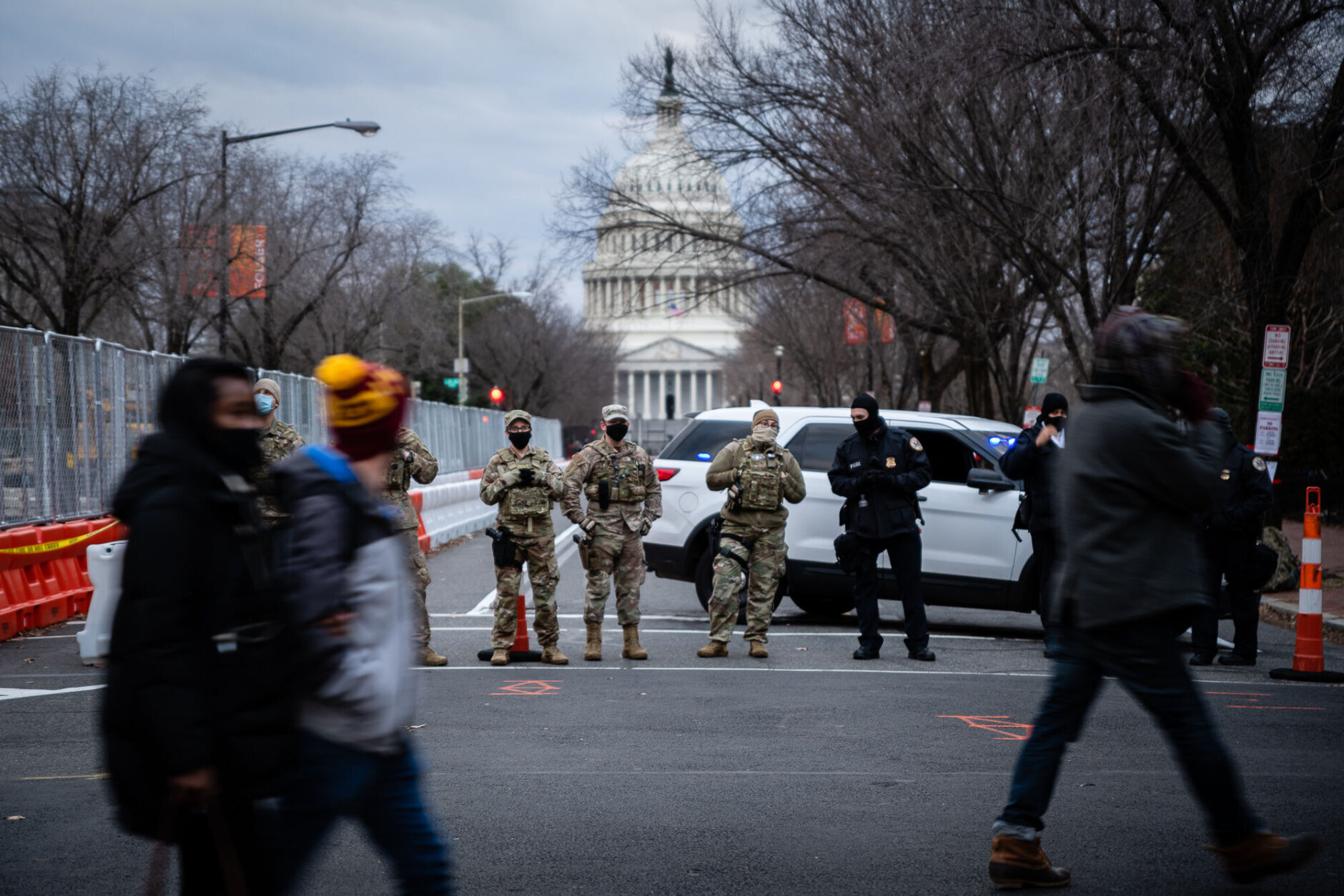