Some of the most iconic images of D.C.’s early punk rock scene were taken with a camera borrowed from a high school photography class.

“I was a bored 16-year old high school student, looking for something to do,” said photographer Jim Saah, whose photography has appeared in movies, print and on record covers, including Fugazi’s seminal LP ‘Repeater.'”

Saah’s first book, “In My Eyes: Photographs 1982-1997,” on Cabin 1 Books, contains 332 pages of black and white images capturing the passion and abandon on Washington’s music scene. 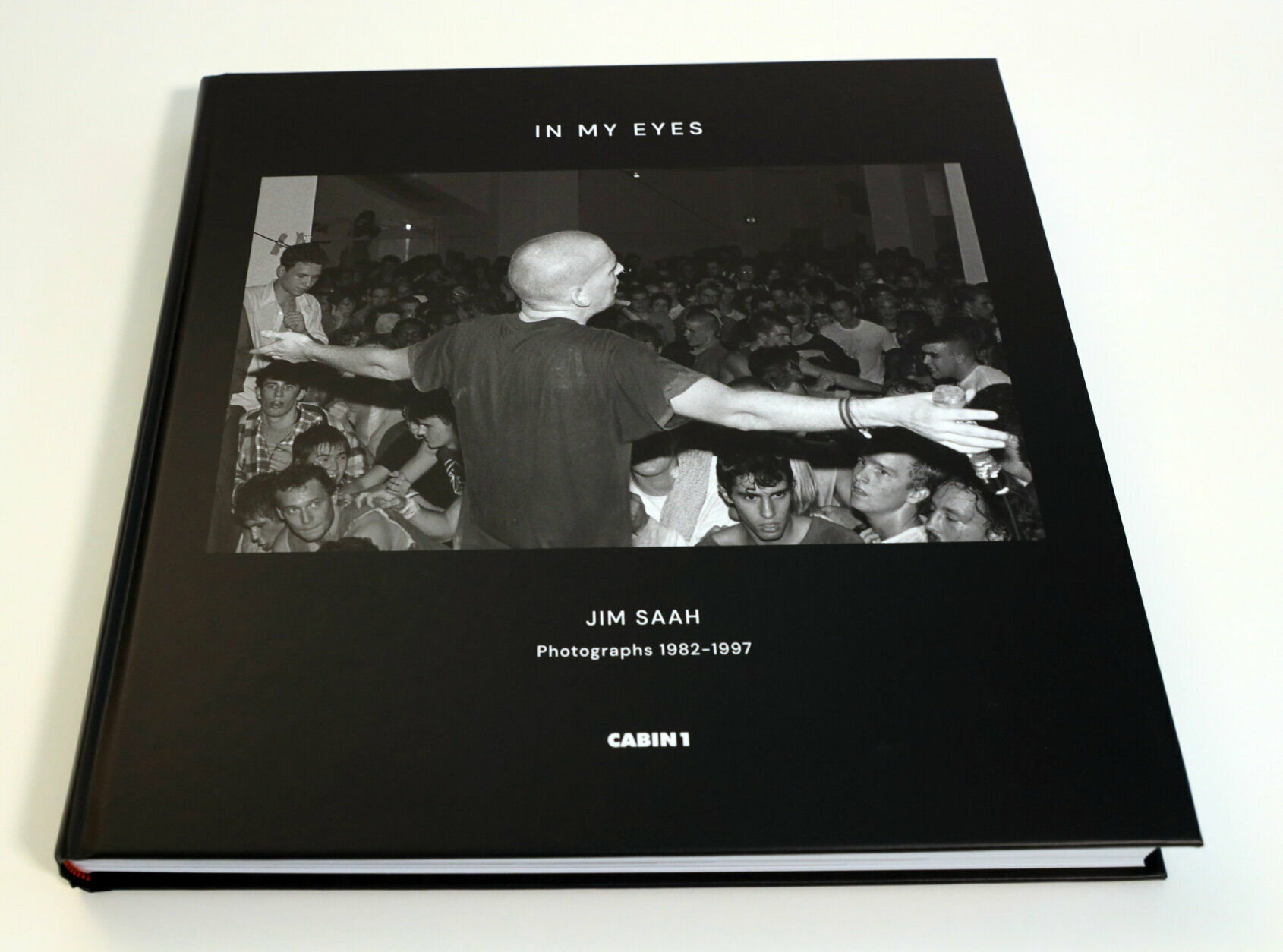 The former Wheaton High School student, now 56, recalled his introduction to the nascent hard-core punk scene in 1982, with a group of classmates.

“We decided to go to the midnight show of Rocky Horror Picture Show — the midnight show — at the Georgetown Theater. Little did I know that at the time a lot of punk rockers from D.C. worked there. They would play music before the show — a lot of British punk rock, like The Stranglers and Buzzcocks. And The Ramones.” 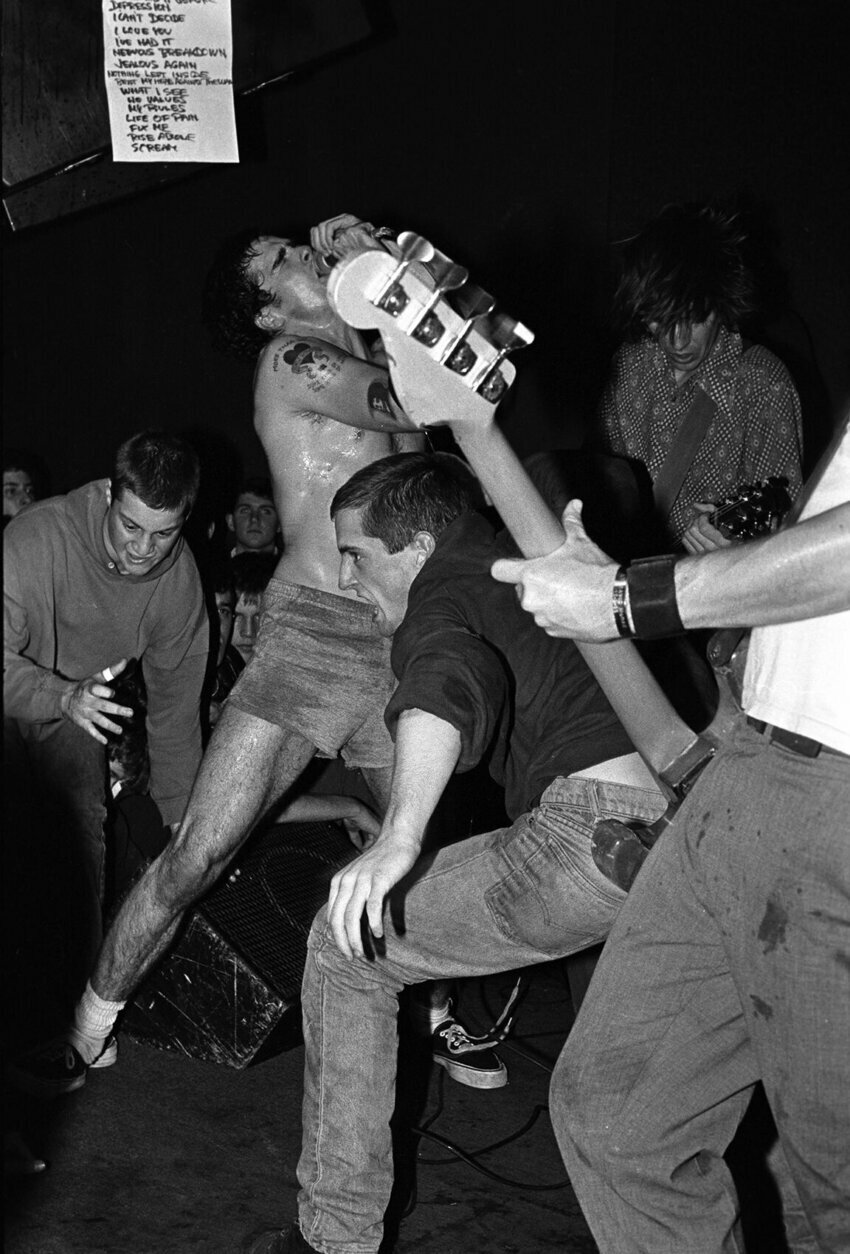 “I just never heard music like that before, and I was like, where do I get this stuff?” Saah remembered.

“The first show I saw was Minor Threat and Government Issue at Maryland university,  I think it was the Stamp Union, but I didn’t take a camera,” Saah said. “My experience at concerts was ‘cameras aren’t allowed.'” 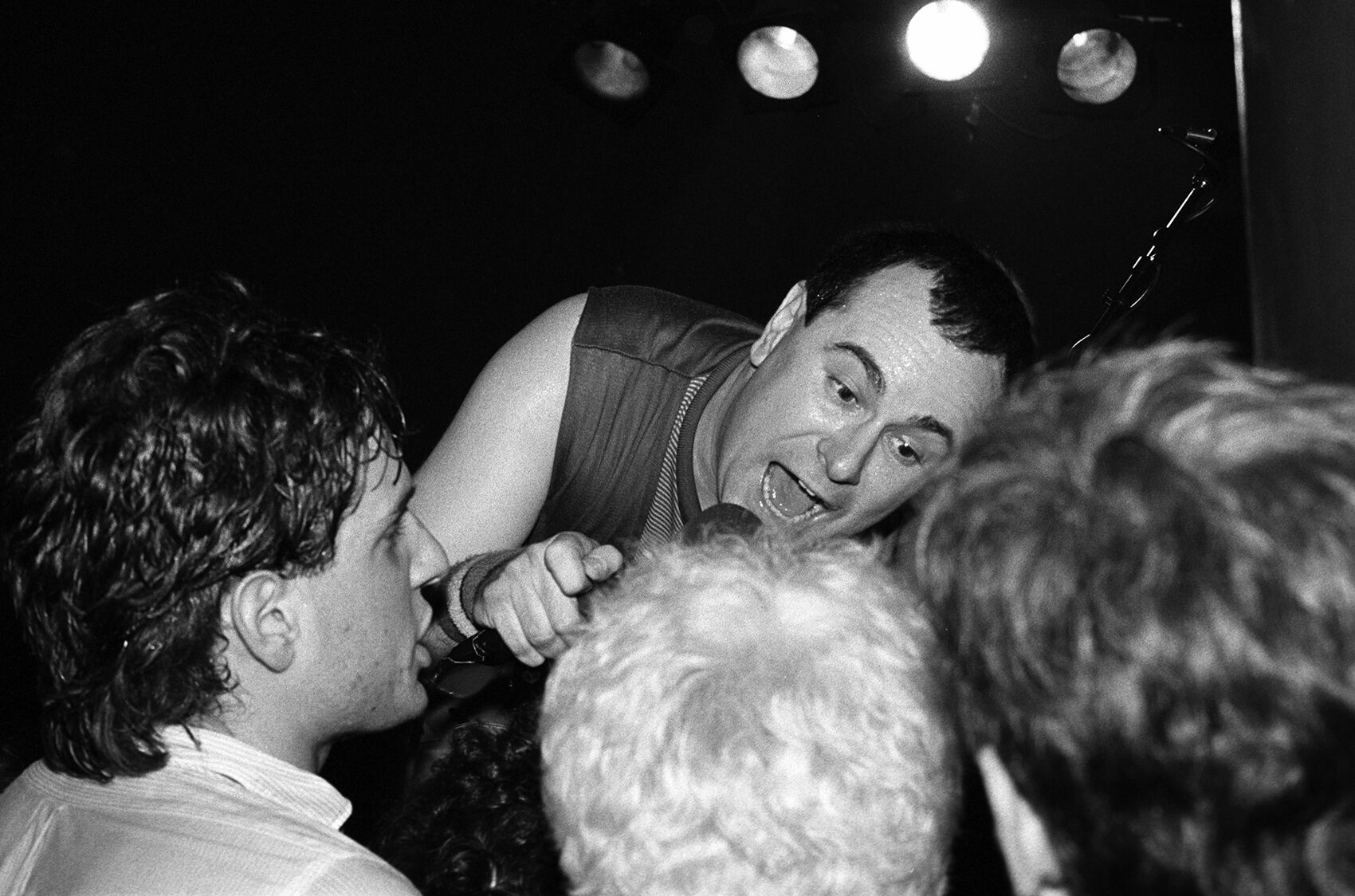 However, the intensity he witnessed at a hard-core punk show was very different.

“This was not a band on a stage, where you’re a mile away, and they look like little ants,” he said, describing what he saw through his viewfinder. “This was people having a joyous experience.”

Like the bands he was photographing, whose youthful energy surpassed their musical proficiency, Saah’s earliest images, didn’t rely on high technology.

“It was a Pentax K1000 — a typical camera that would be lent out from high schools to students that were taking photography classes,” recalled Saah. “A lot of the early ones were taken with the school camera — and school film, for that matter.” 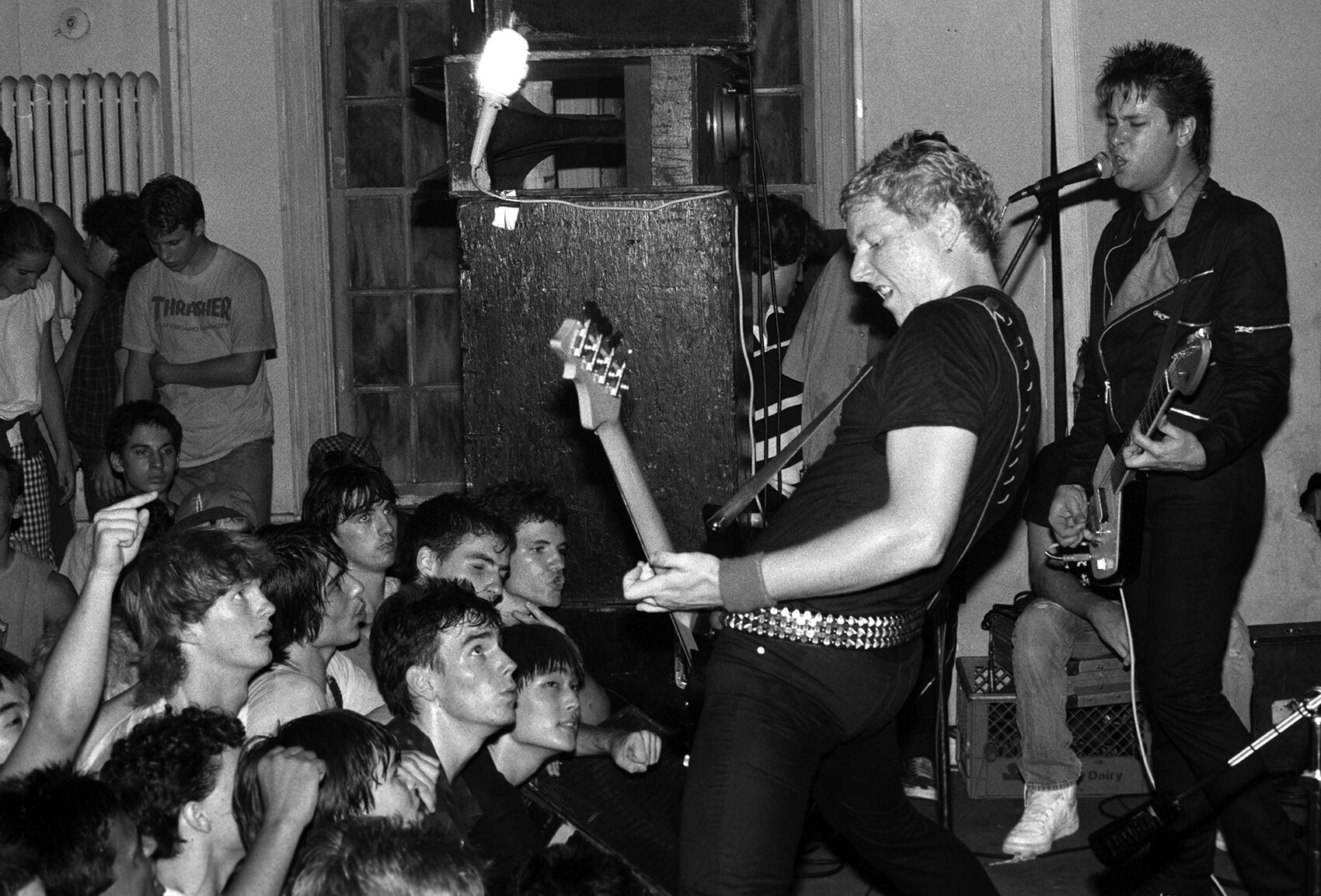 4/6
A previously-unseen photo of Agent Orange, at the Wilson Center, at the corner of 15th and Irving St. NW. (Courtesy Jim Saah)

Many of Saah’s photographs are of audience members at shows.

“I made a lot of instant friends,” Saah said, describing talking with band and audience members between sets at shows. “We would go out front, because it was hot, we’d talk about bands, and people were handing out flyers for the next show.” 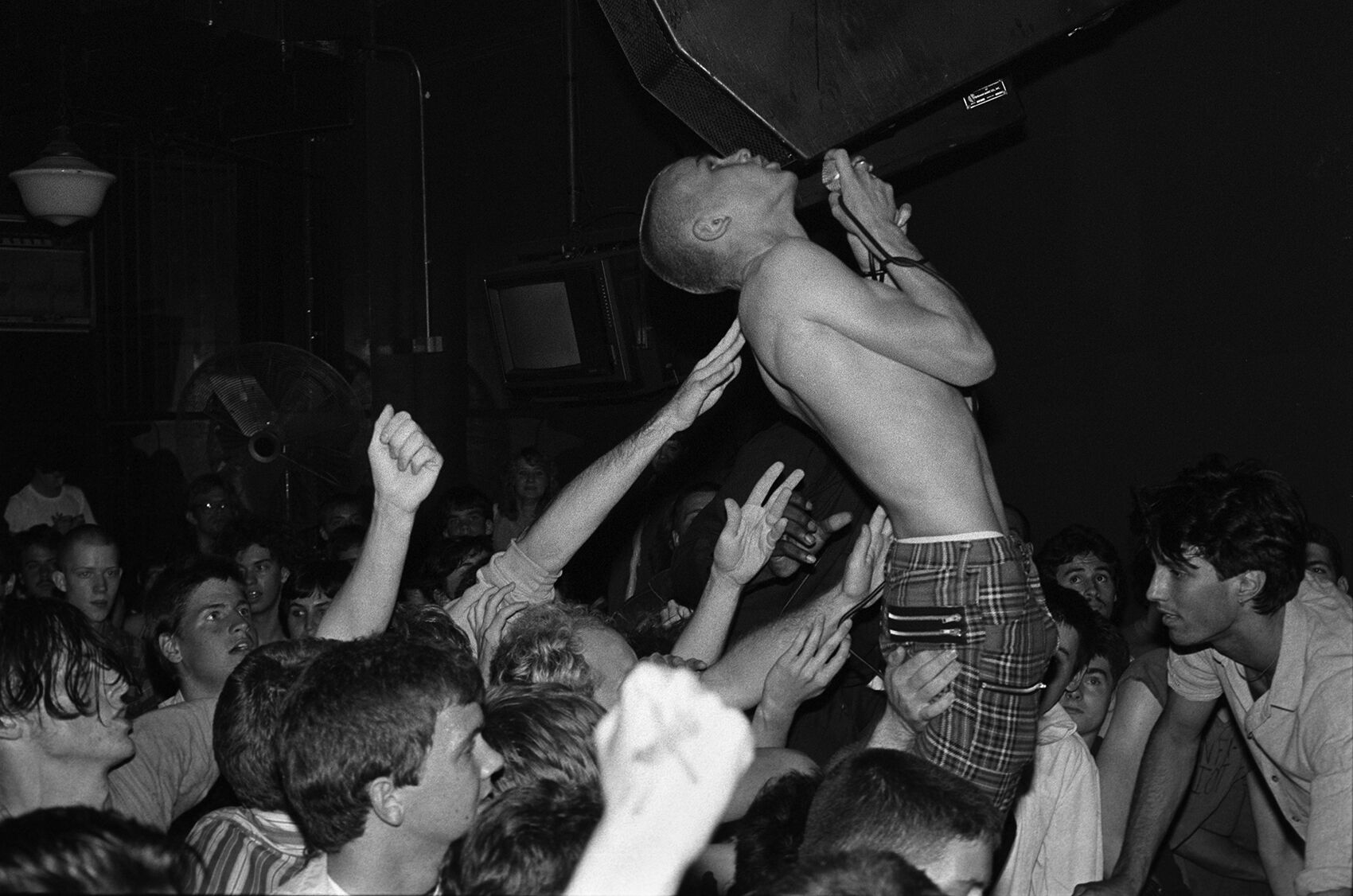 5/6
Many of Jim Saah’s iconic photos, including this one of Alec MacKaye, of The Faith, were featured in “Salad Days: A Decade of Punk in Washington, D.C.” — Saah was the documentary’s director of photography. (Courtesy Jim Saah)

“We were all just very excited,” said Saah, of the bands at the time. “There was a real community, and camaraderie. They were really trying to win the night, every night. They seemed to play like it was their last show.”

With decades of photo credits, I asked Saah how he happened to have photos that hadn’t been seen before. 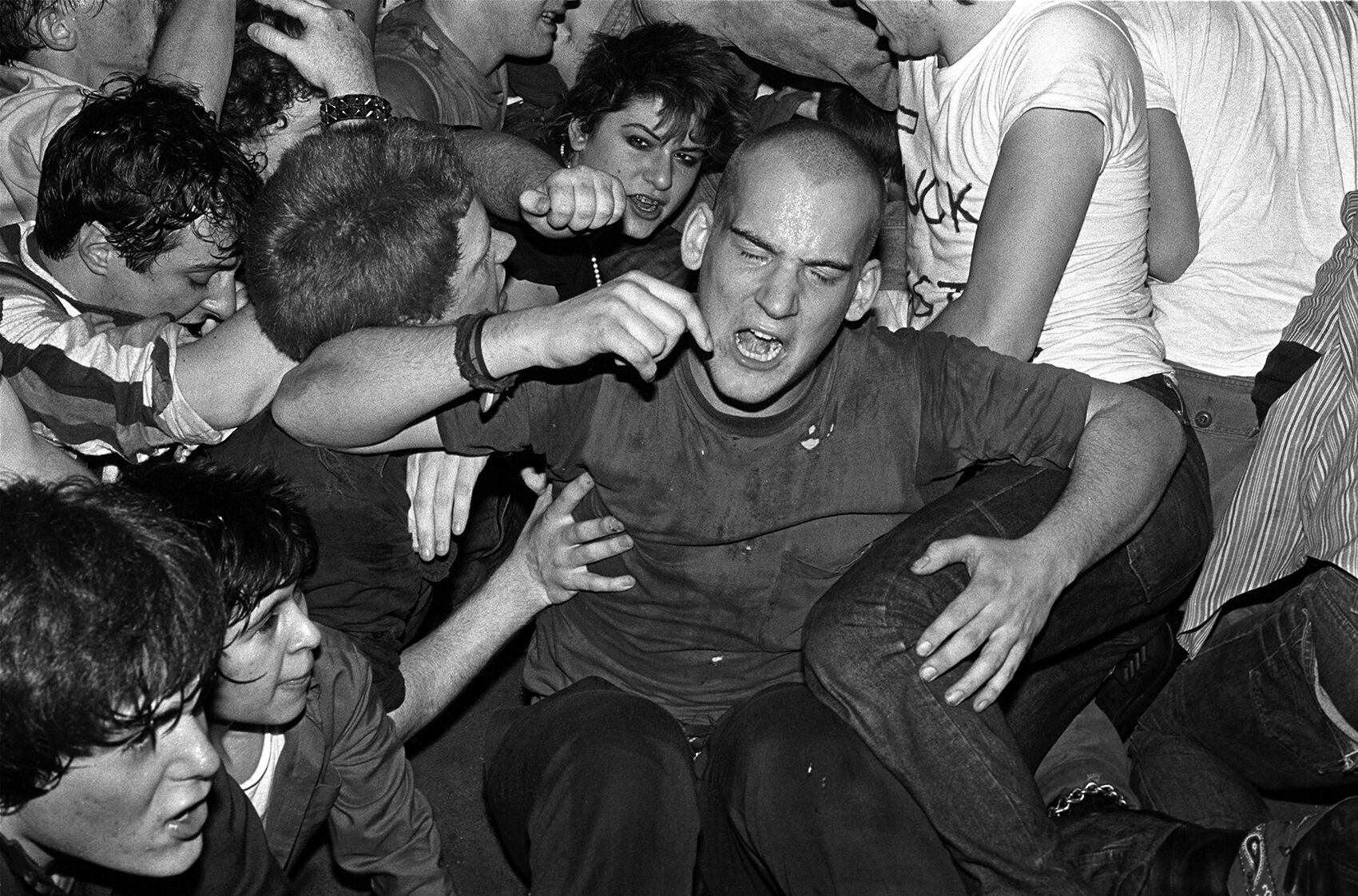 “Back in the day, you develop the negatives, make a contact sheet, look through it, circle a couple that you think look good, print those, then put [the contact sheet] in a file cabinet,” said Saah.

“Fast-forward, 30 years later, I’ve got a nice scanner, I scan the whole roll, then look at it big on the computer, and I’m like, ‘Wow, I didn’t even know I had half this stuff,'” Saah said.

Saah’s book is available for sale online, and will be in brick-and-mortar stores starting Oct. 20, 2021.