The last Ford Bronco was sold in 1996. When it went away, it was a large two-door SUV that was best known for a certain early 1990s low-speed chase on a California highway.

Now, the Bronco is about to hit the market updated for the 21st century. Its funky, retro style throws back to the 1960s when the original Bronco was one cool ride. With removable doors and roof, it elicits thoughts of a simpler time. But it has a modern interior, a large touch screen and seating materials, so drivers might not want to splash the retro-cool ride with mud.

This new Bronco is about the same size as its main competitor, the Jeep Wrangler. It looks tough and ready to take on anything you throw at it. There is a lot of ground clearance and some serious looking hardware when you scope the wheels and large tires. The suspension looks like it’s up to the task, but a test drive will have to wait till the fall.

Things to know: The 2021 Ford Bronco returns with a two-door and four-door go-anywhere SUV. The Bronco takes on the Jeep Wrangler in size and capability. 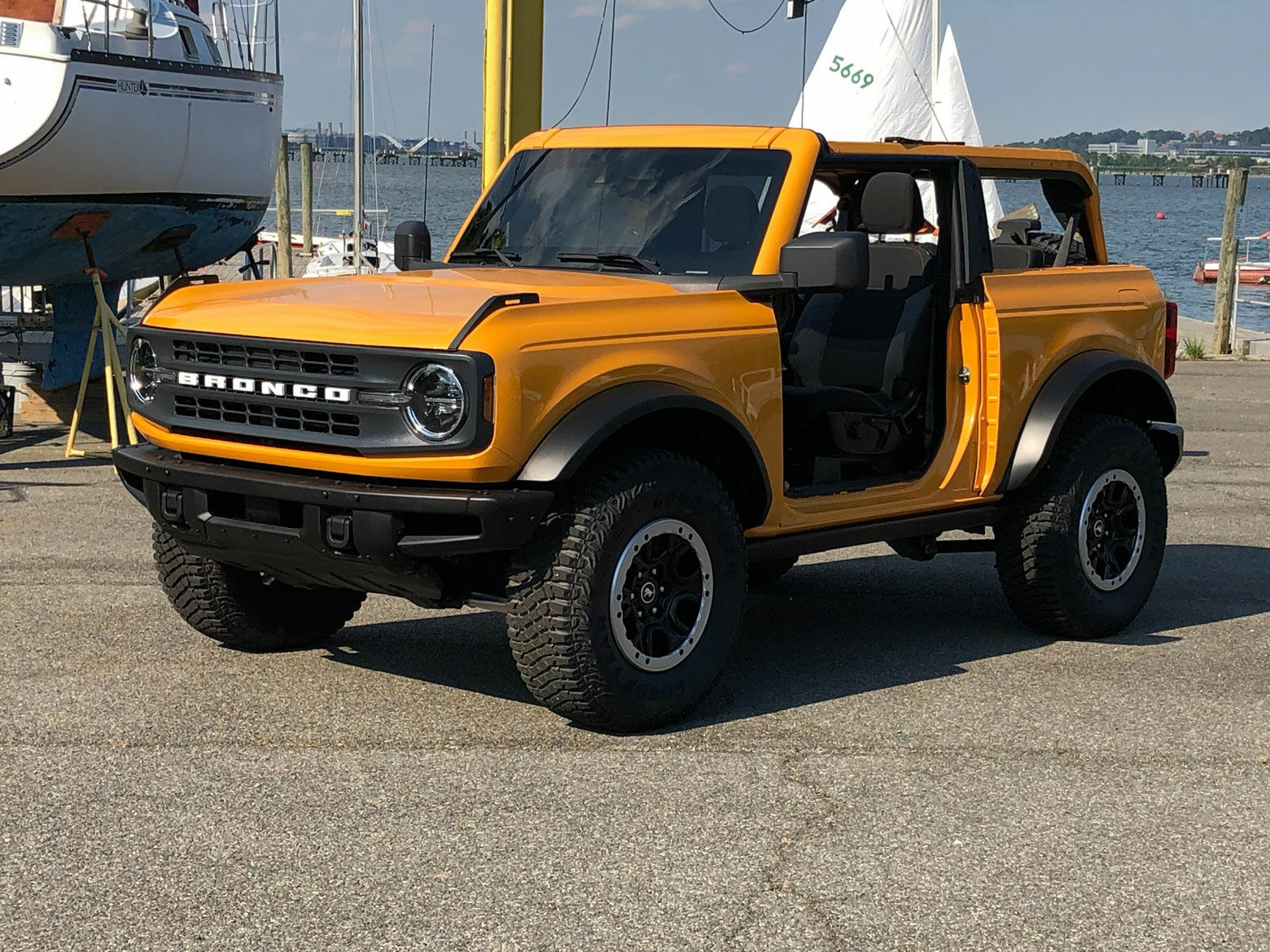 1/10
The 2021 Ford Bronco is one of the most anticipated American cars in years. (WTOP/Mike Parris) 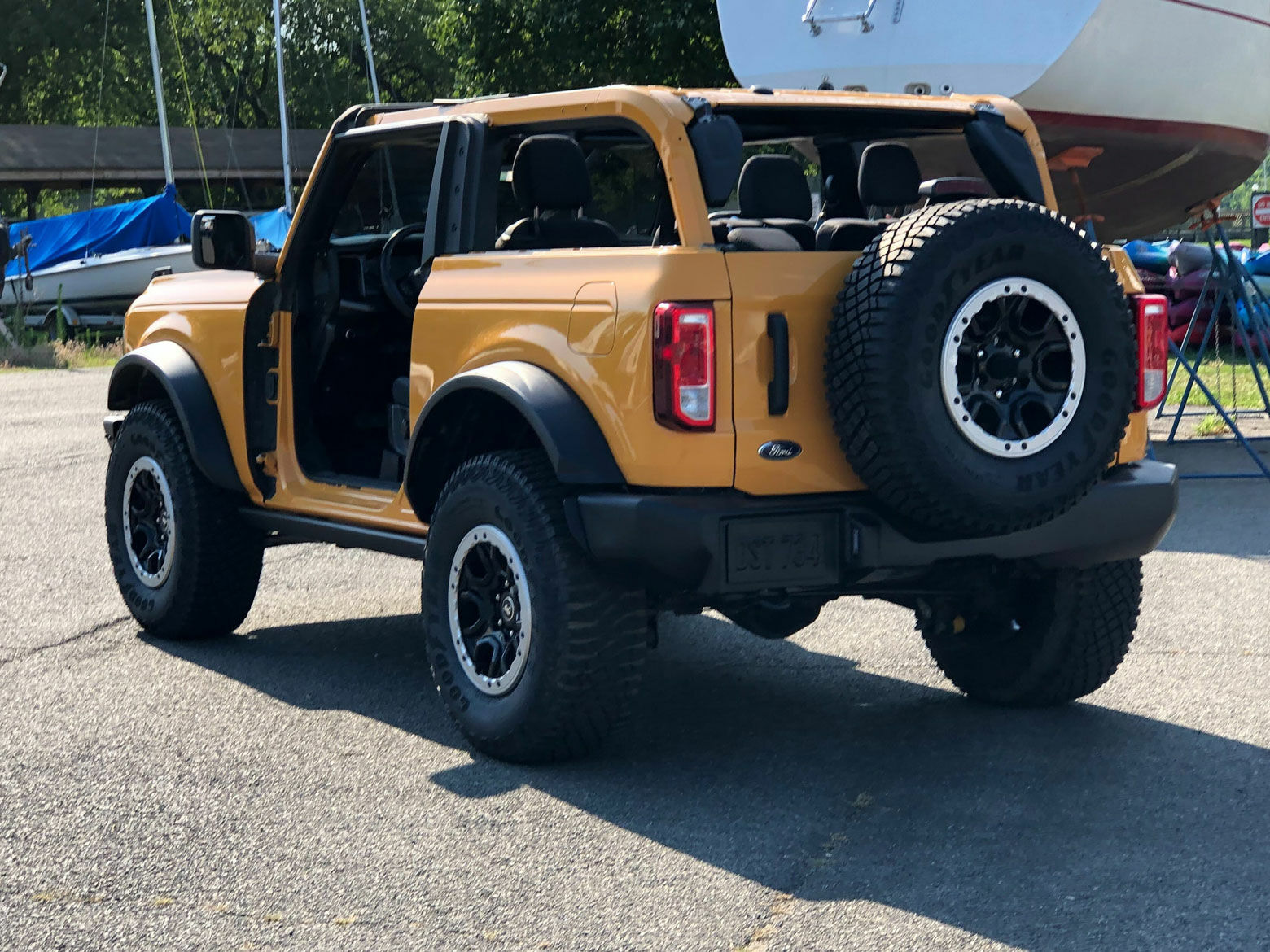 2/10
The new Bronco is a throwback to the car that perhaps is best known for a low-speed chase in California in the 1990s. (WTOP/Mike Parris) 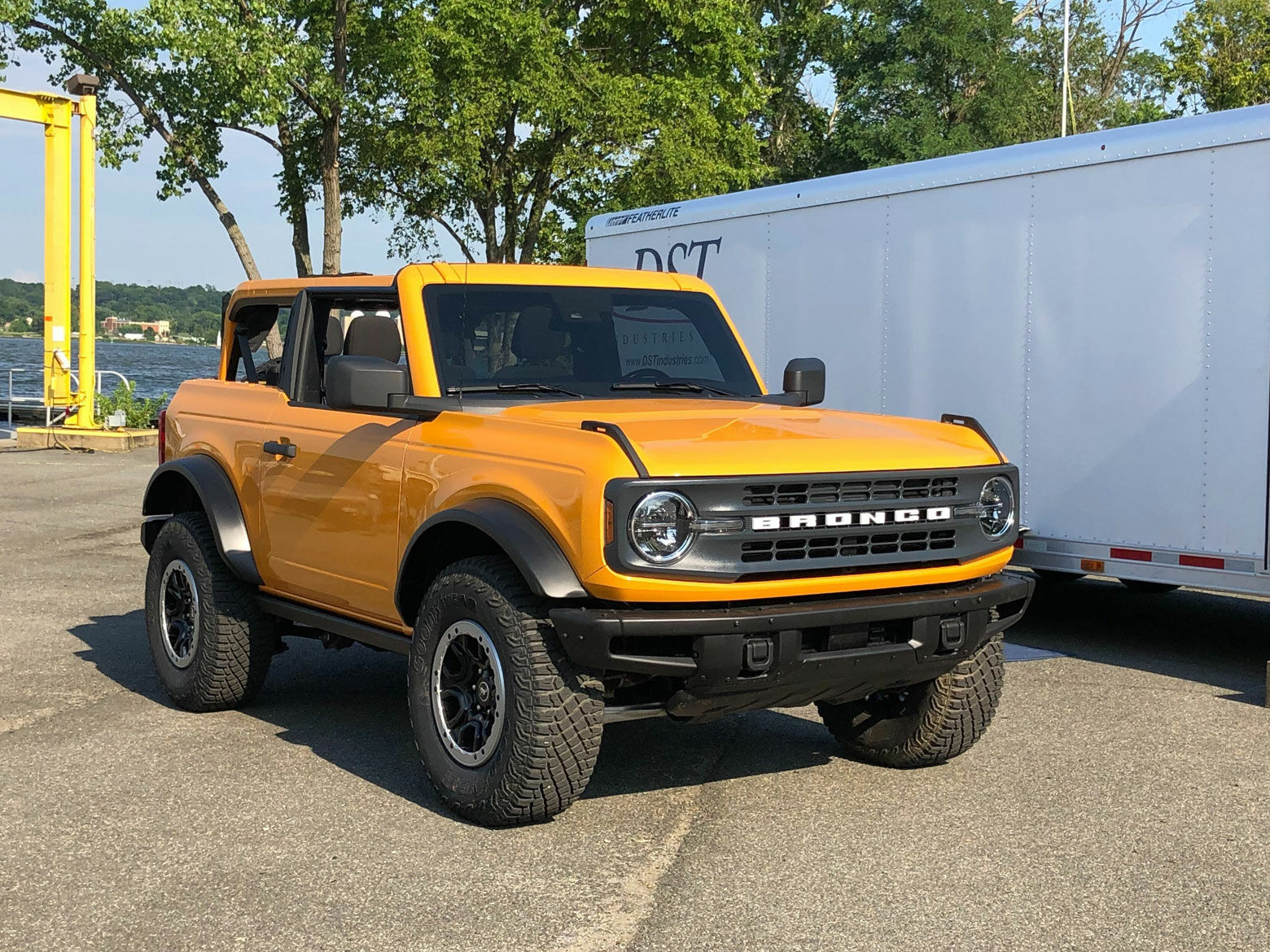 3/10
The new Bronco is about the size of the Jeep Wrangler. (WTOP/Mike Parris) 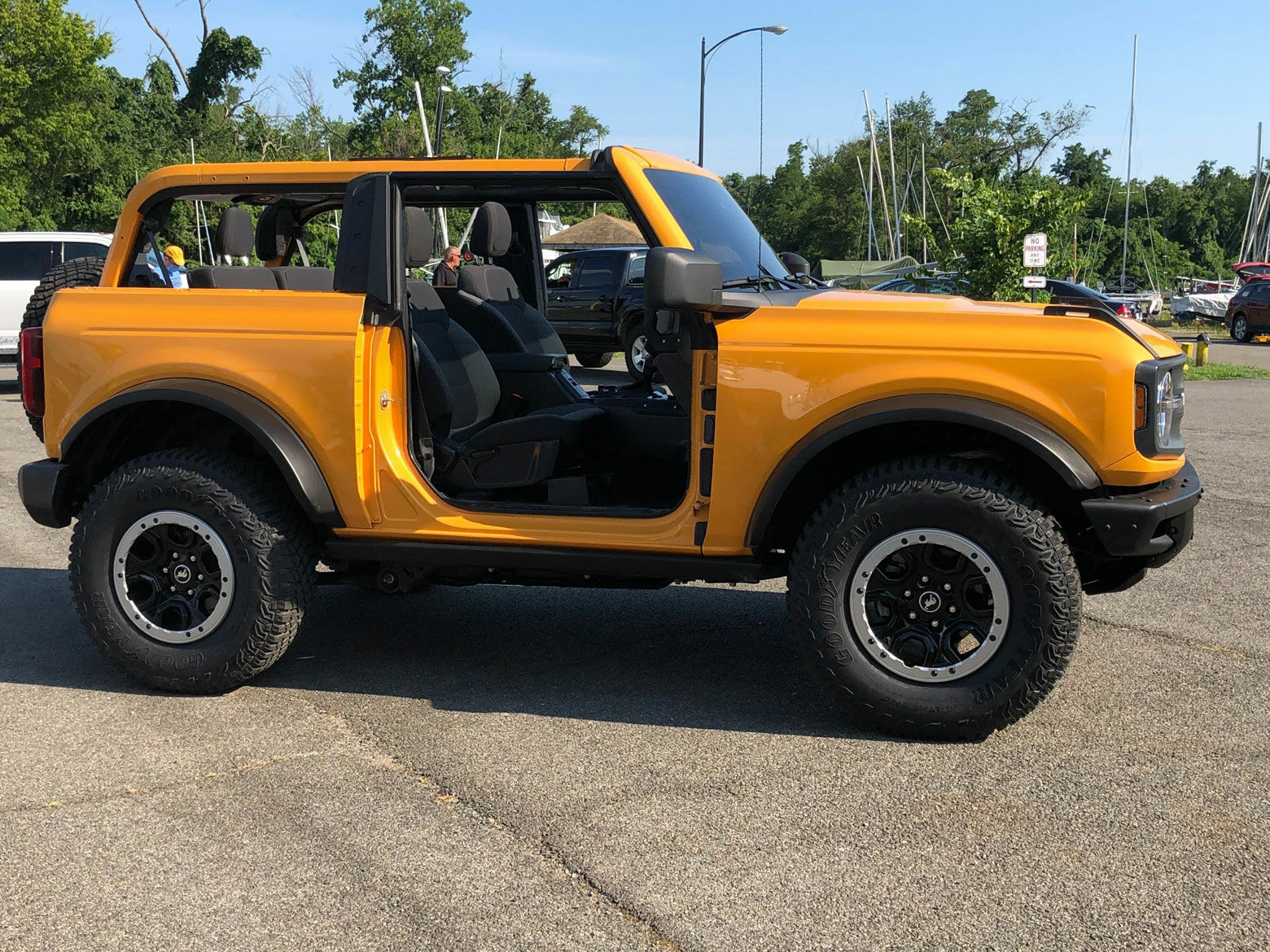 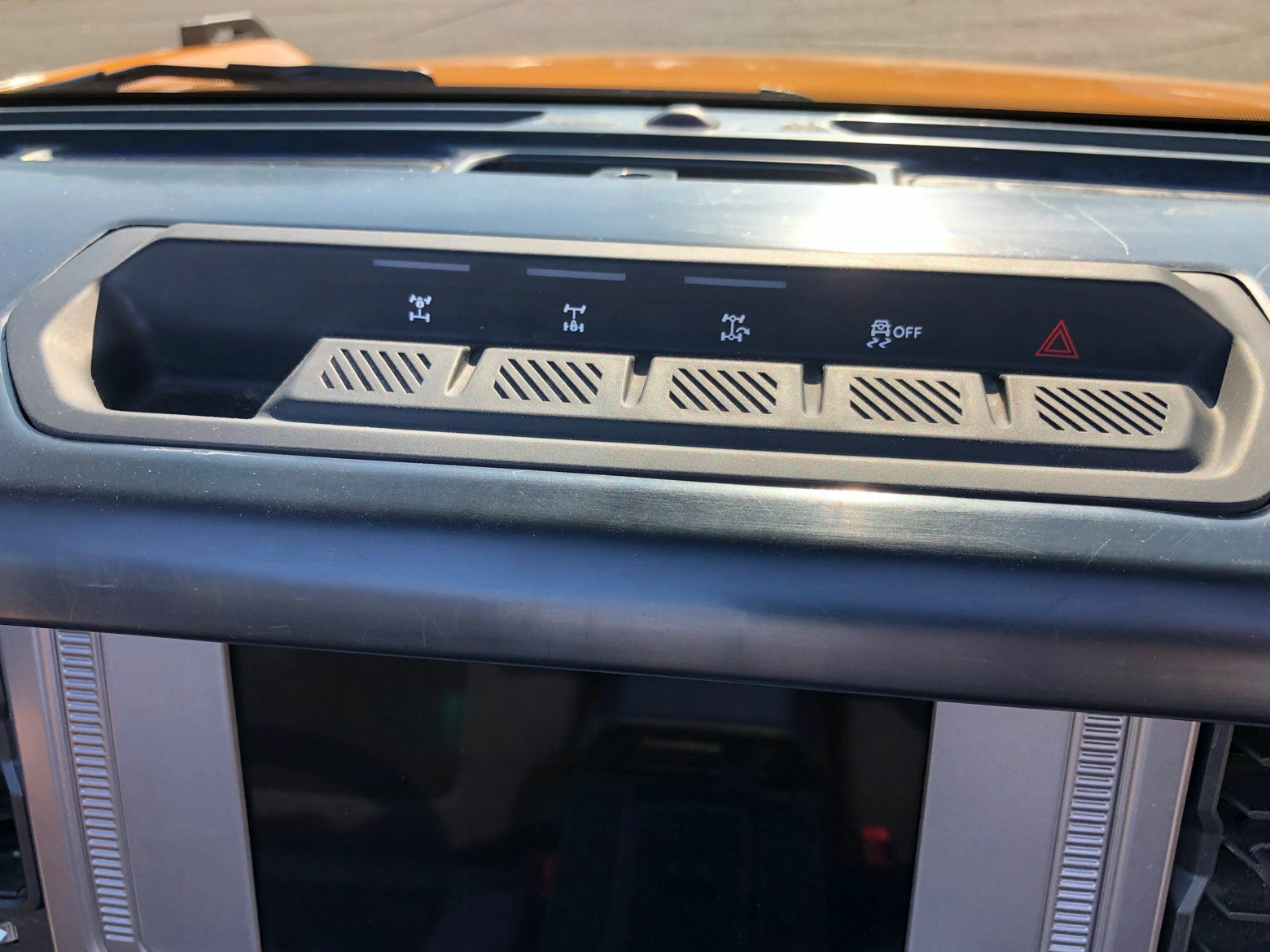 5/10
While the car is a throwback, it will have modern touches in a rugged interior. (WTOP/Mike Parris) 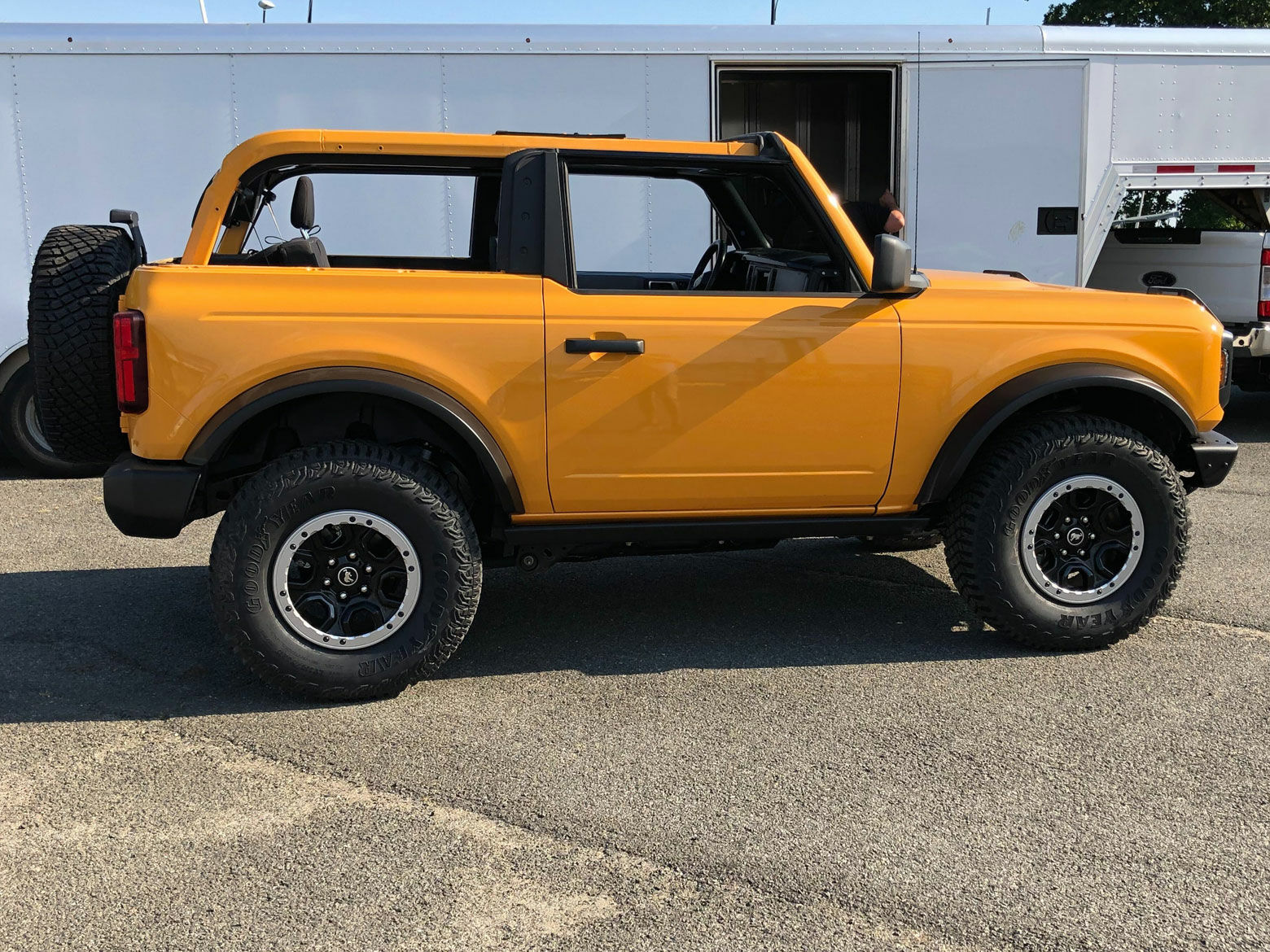 6/10
The new Bronco has plenty of ground clearance thanks to big wheels and tires. (WTOP/Mike Parris) 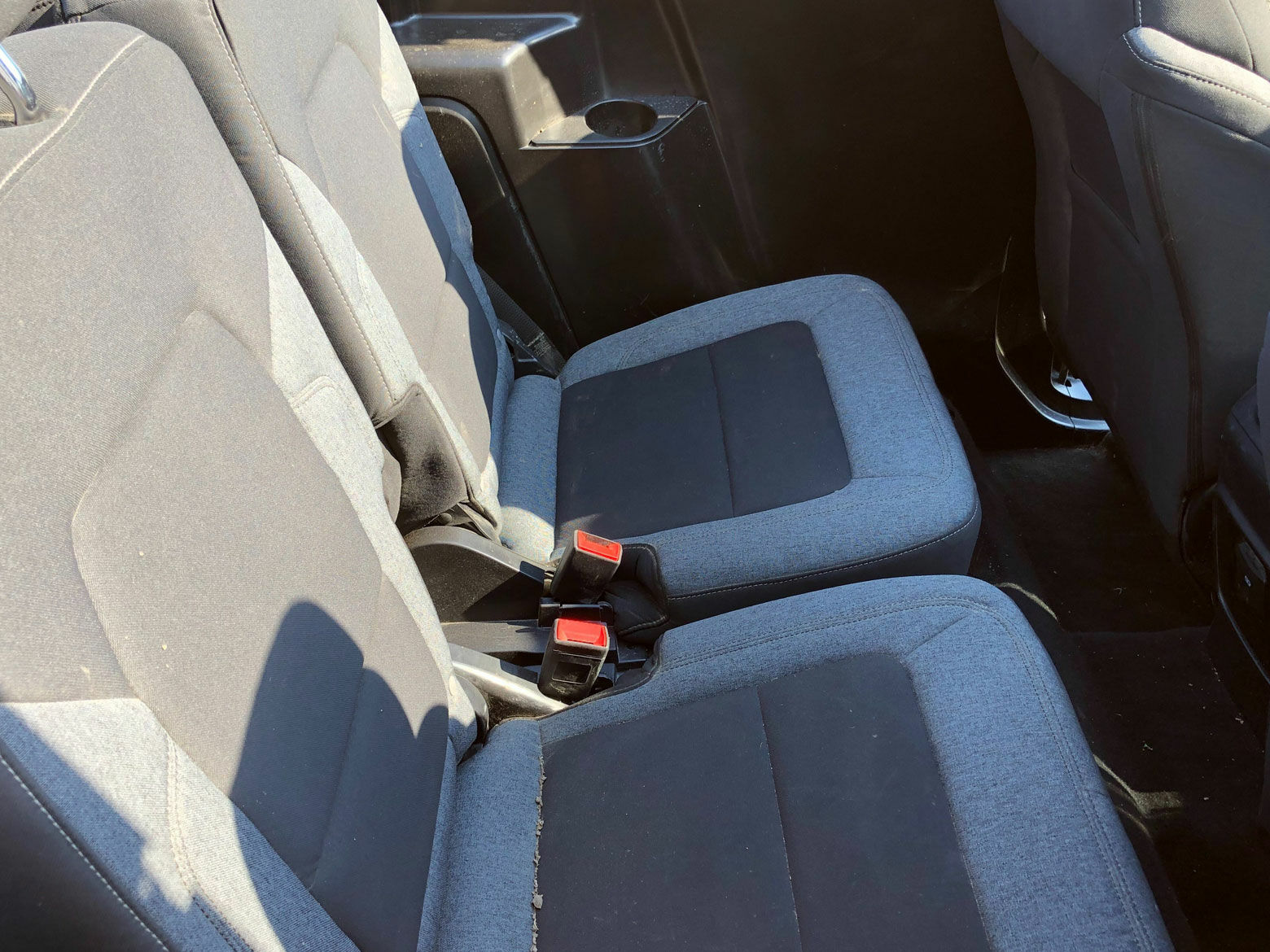 7/10
The rear seats of the new Bronco. (WTOP/Mike Parris) 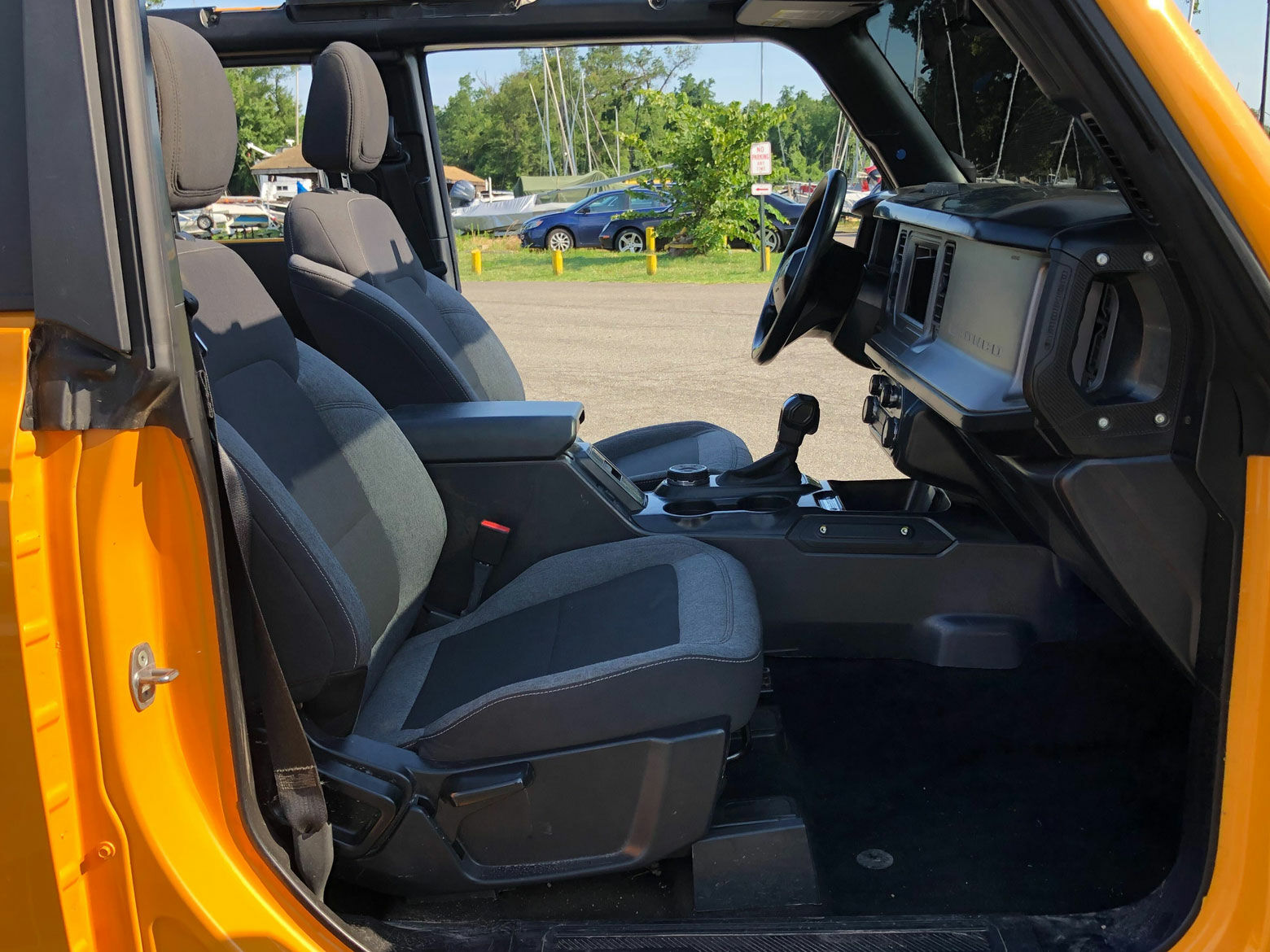 8/10
The front seats of the new Bronco have some creature comforts, but are designed to fit with the go-anywhere style of the car. (WTOP/Mike Parris) 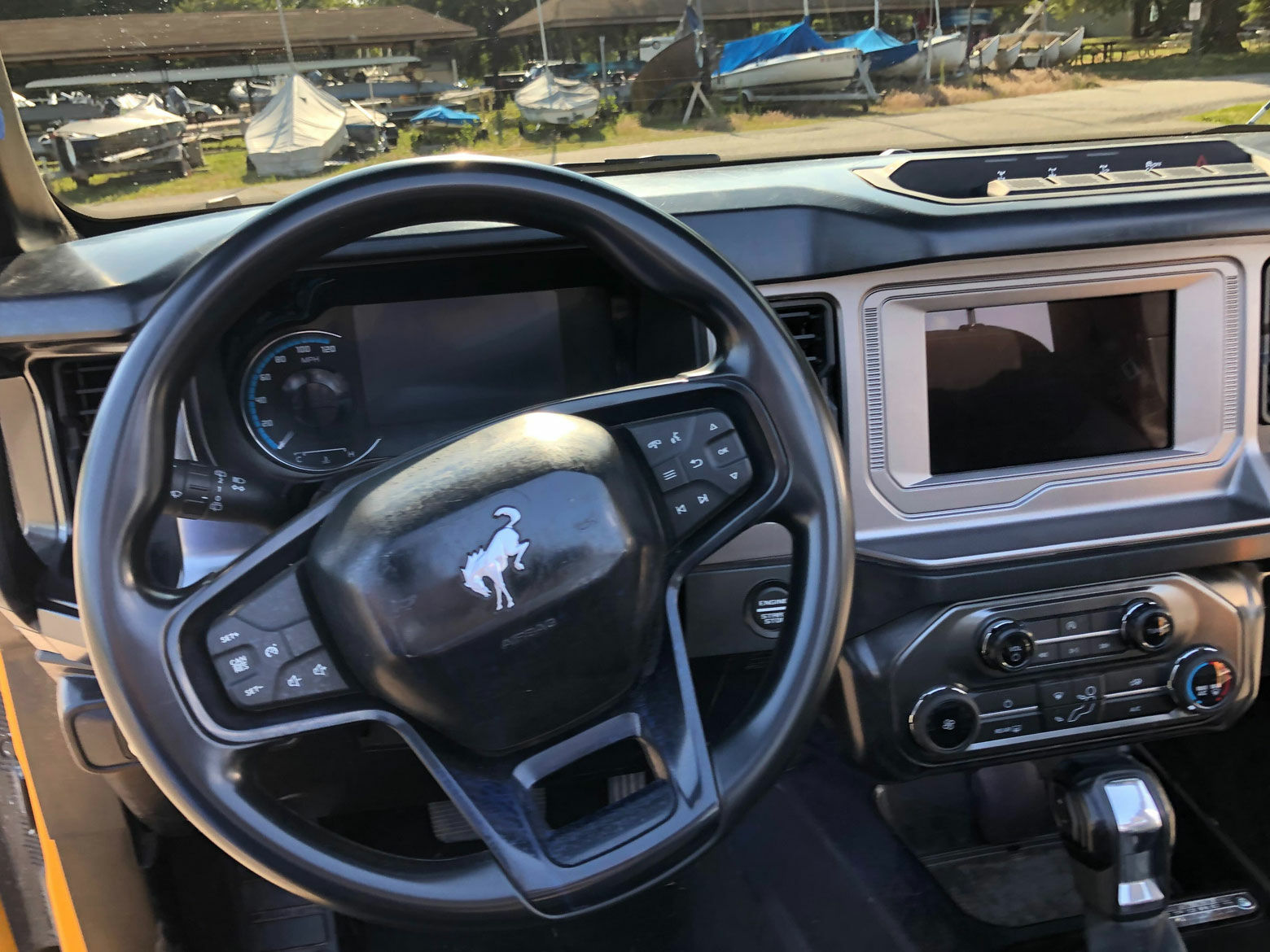 9/10
The Bronco is so cool looking, you might not want to get it muddy, even if that’s what it’s designed for. (WTOP/Mike Parris) 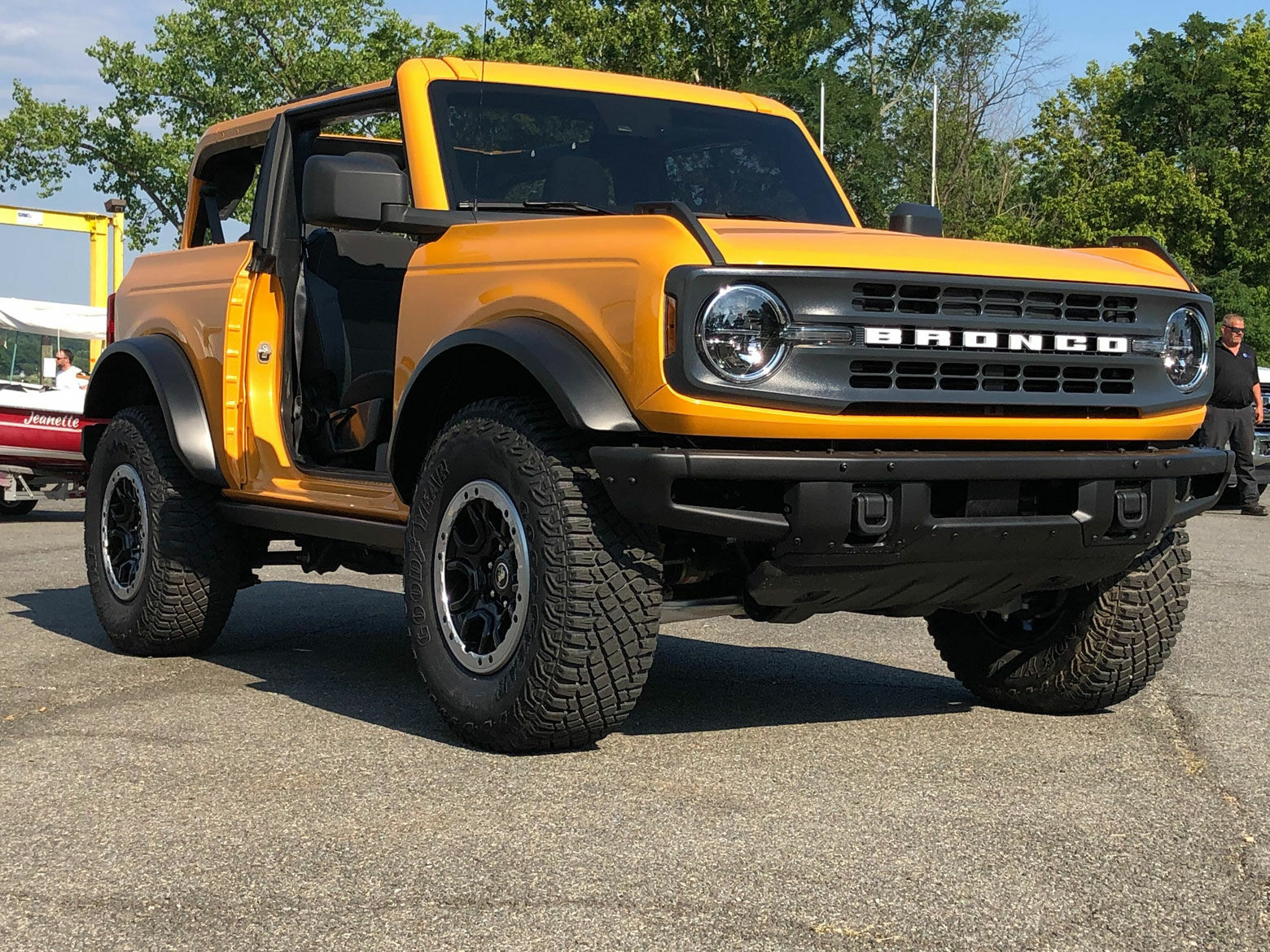