As auto manufacturers race toward partial or full electrification in the near future, one brand is building an electric vehicle that may as well be called the Tesla killer instead of IONIQ 5.

Why is it a potential Tesla killer? Because in typical Hyundai fashion, you get a ton of standard and available features, some of which aren’t offered by Tesla. The IONIQ 5 also boasts a lower starting price point, a similar range when compared to Tesla’s Model Y SUV and Hyundai’s 3-year, 36,000-mile complimentary maintenance and 10-year, 100,000-mile powertrain warranty.

These features and cost savings make the IONIQ 5 a more than viable, attractive competitor.

Along the sides, deeply sculpted door panels and a crisp upper character line create motion that continues to flow into the raised hatchback deck, adorned with an upper hatch spoiler. Auto deploying/retracting door handles scream “luxury car.” The greenhouse is tall and handsome. The rear design treatment also features a full LED display for tail and brake lamps. This is a very good-looking automobile.

The IONIQ 5 interior is dominated by a continuous raised housing that stretches from the driver side to the center dash. A pair of 12.3” screens are in the housing that provides the driver with pertinent road info and HVAC, navigation and audio information.

It’s a very clean, functional setup that looks especially exceptional at night, given the white background on both clusters. With the tall greenhouse and wide body, comfortable seating for five real-sized adults is at hand. Second row seats fold flat, giving IONIQ 5 plenty of cargo-carrying capacity.

While our test vehicle featured optional All-Wheel Drive, IONIQ 5 is available with battery packs paired to a rear motor only, or with front and rear motors. The top-of-the-line dual motor AWD setup delivers a combined power output of 320 horsepower and 446 pound-feet of torque. IONIQ 5 zooms from 0 to 60 mph in less than five seconds. The single-motor layout offers 225 horsepower and 258 pound-feet of torque. All configurations have a top speed of 115 mph and a 2,000-pound towing capacity.

Range: When equipped with a single motor, the maximum driving range is 303 miles. The maximum range of dual motor, AWD models is 256 miles.

Safety: With the battery weight built into the vehicle floor, IONIQ 5 has a low center of gravity, resulting in a lower propensity to roll over during a loss of vehicle control. All Hyundai models, including IONIQ 5, feature a long list of standard or available safety gear, depending on trim level. 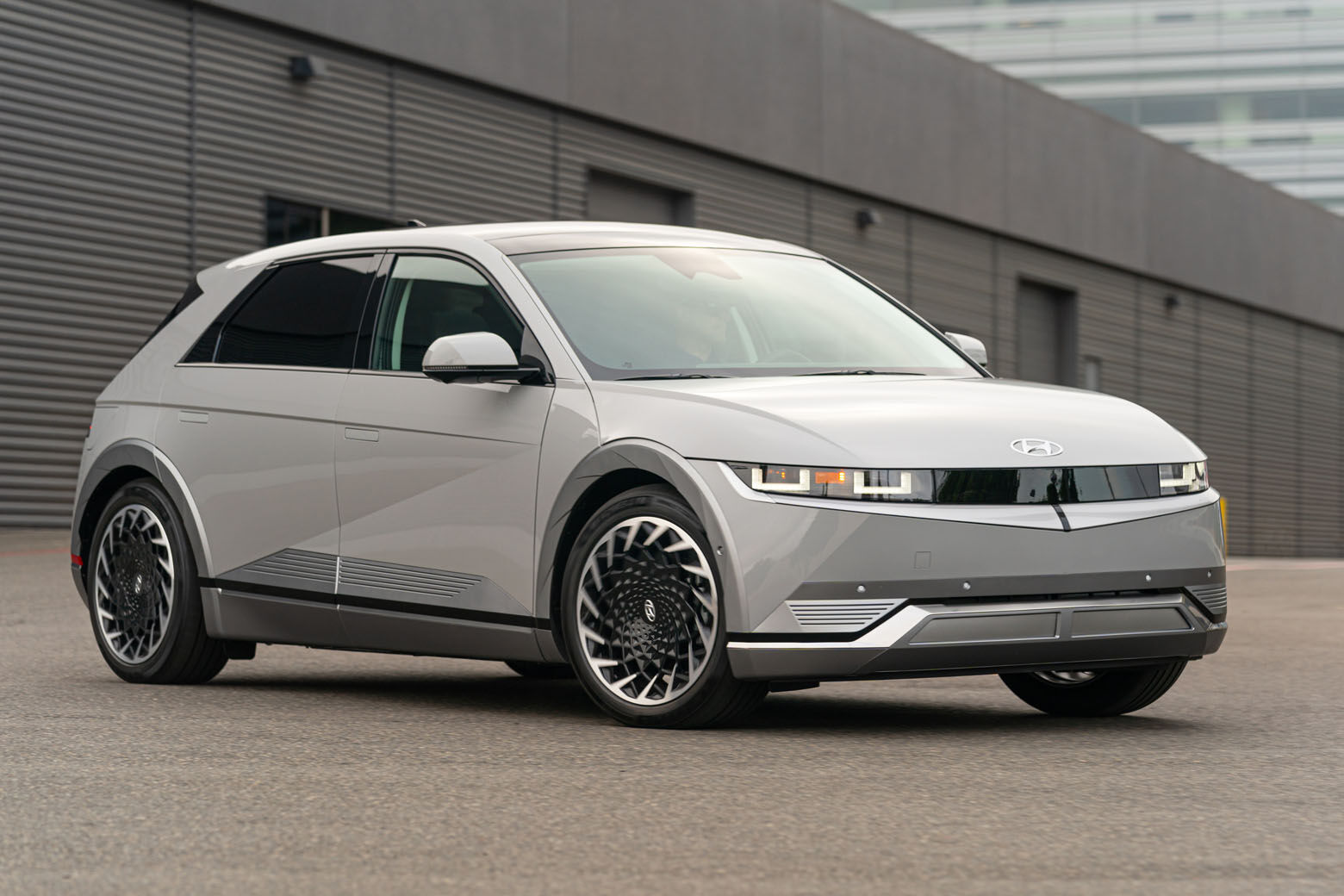 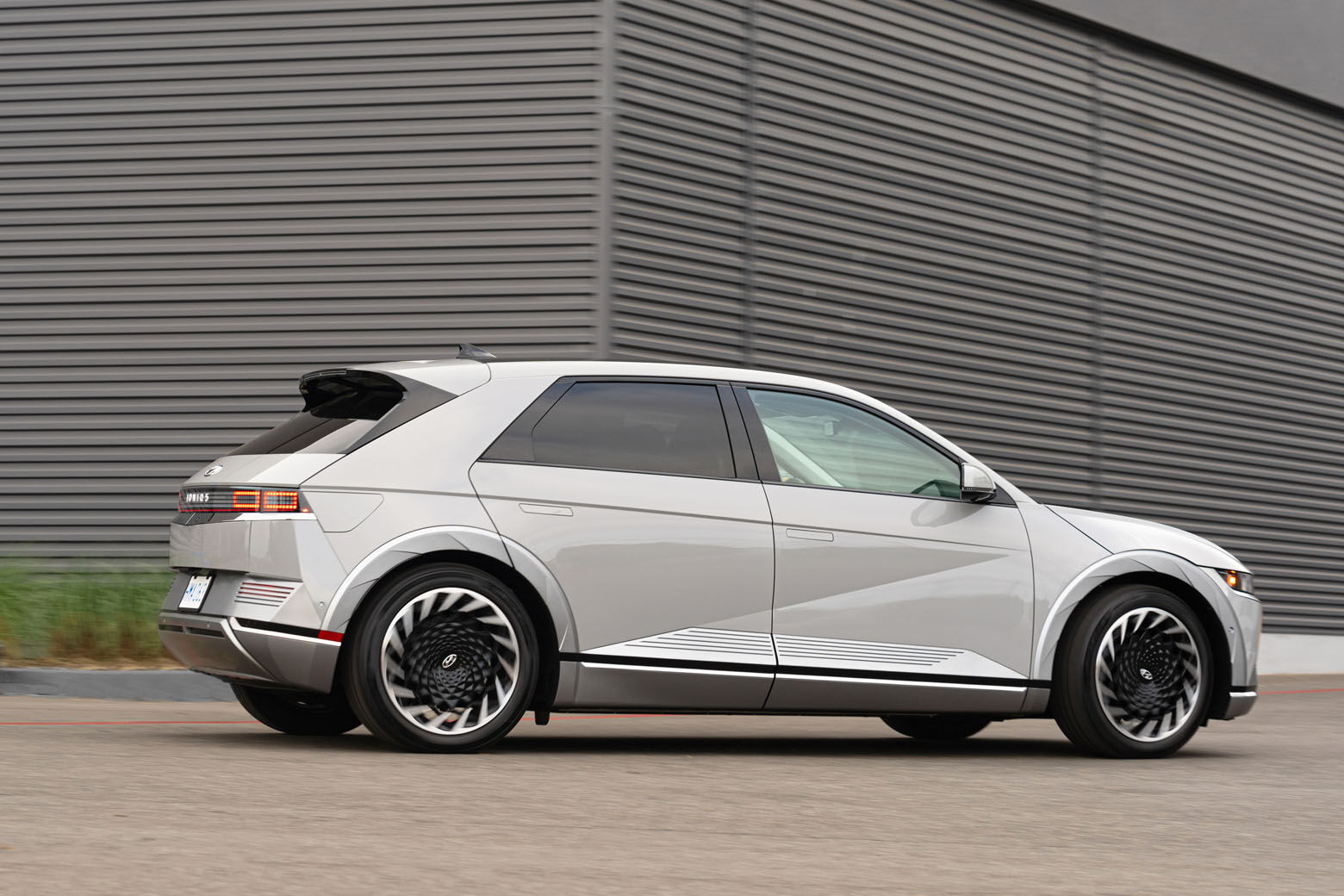 2/5
Along the sides, deeply sculpted door panels and a crisp upper character line create motion that continues to flow into the raised hatchback deck, adorned with an upper hatch spoiler. (Courtesy Brian Armstead) 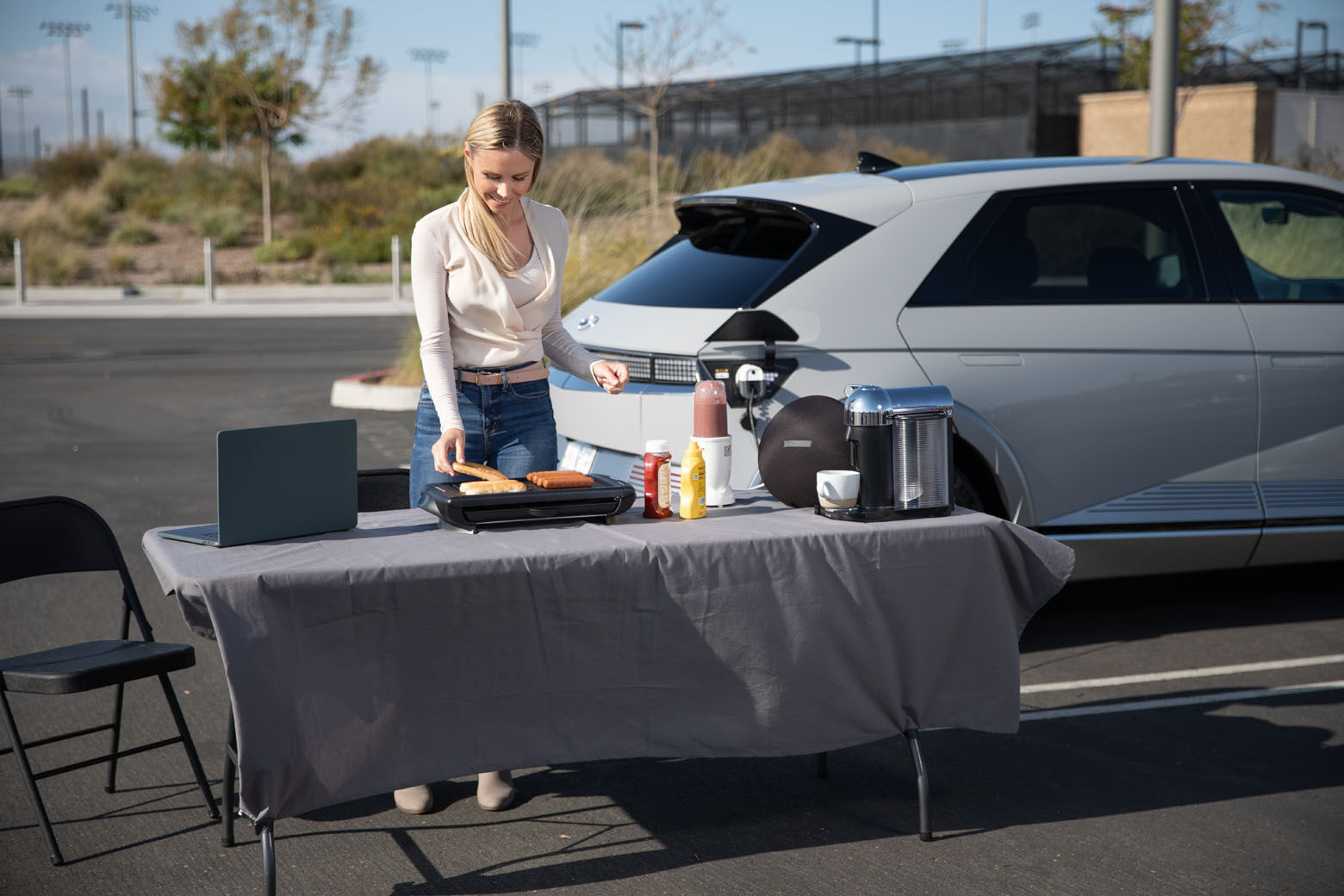 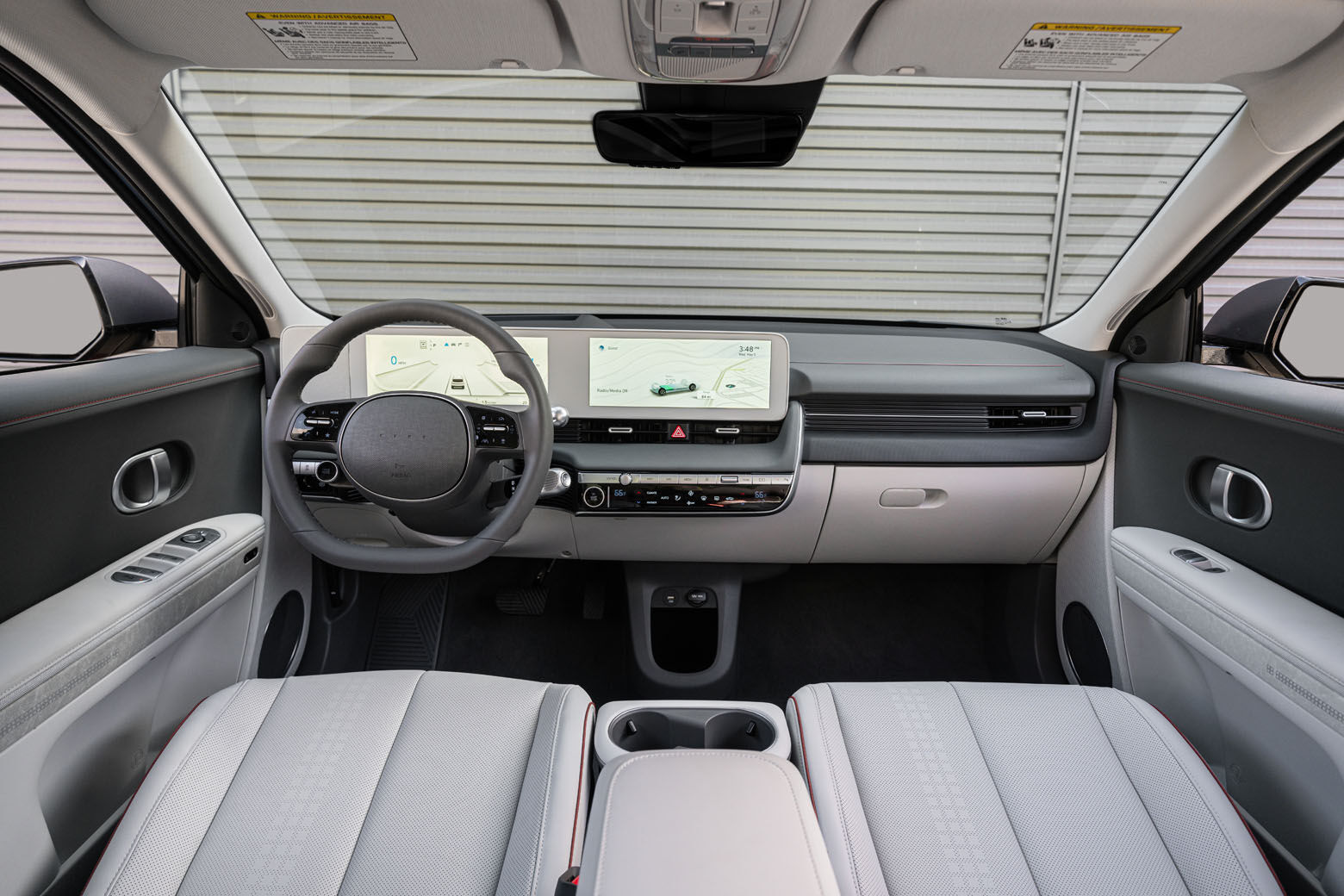 4/5
The bright, airy interior of the IONIQ 5 is super high-tech. (Courtesy Brian Armstead) 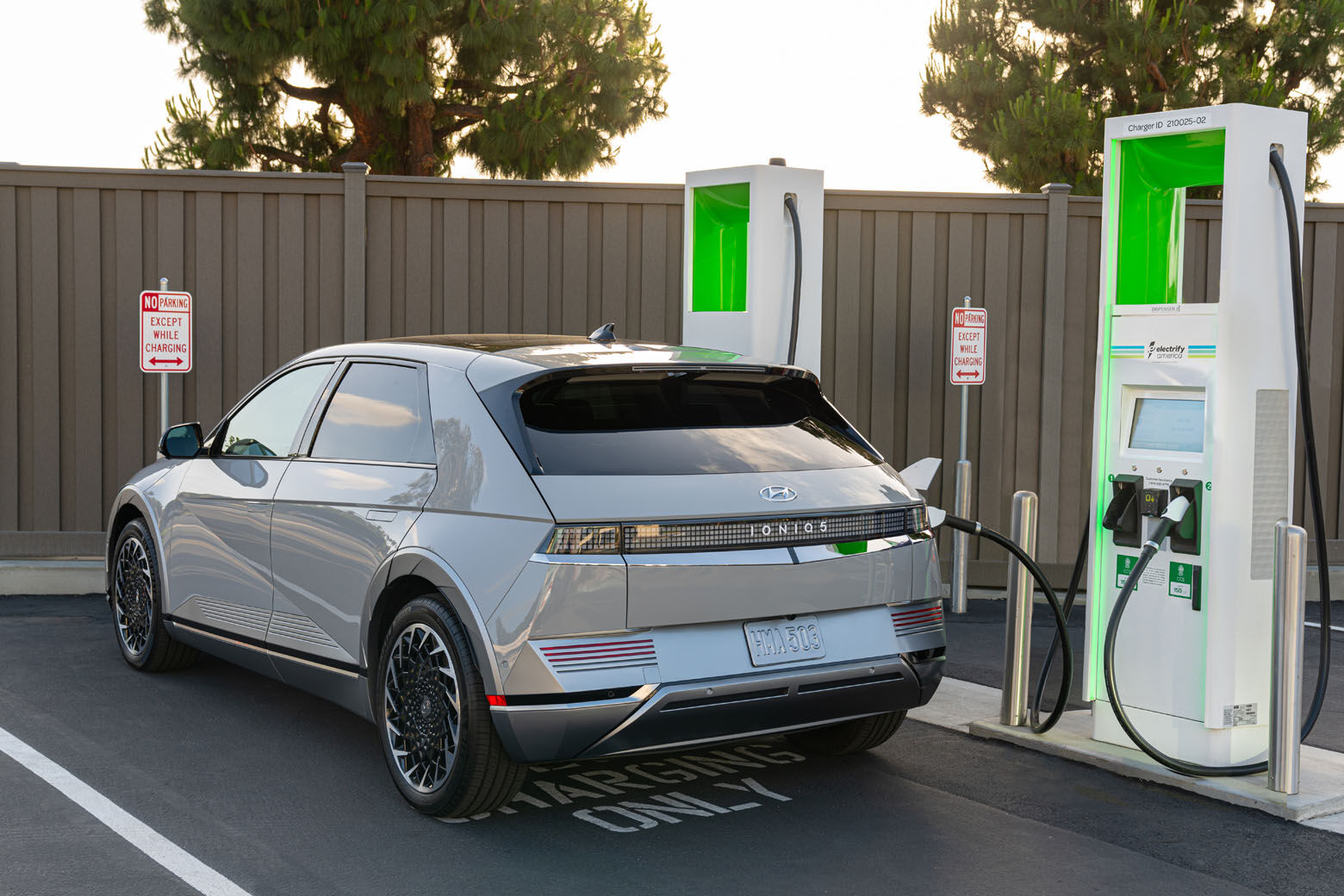