Coronavirus News: Fairfax Co. votes to increase substitute teacher pay | Is it time to get a COVID-19 booster? Which one? | Local cases of COVID-19 | How many in DC region are vaccinated?
Home » Frederick County, MD News » 2 injured after Frederick…

One civilian and a firefighter were injured when a fire broke out at a self-storage facility in New Market, Maryland, on Saturday afternoon.
Listen now to WTOP News WTOP.com | Alexa | Google Home | WTOP App | 103.5 FM

One civilian and a firefighter were injured when a fire broke out at a self-storage facility in New Market, Maryland, causing $1 million in damages on Saturday afternoon.

Frederick County fire crews were called to New Market Mini Storage, off Md. Route 144/Old National Pike and near westbound Interstate 70, just after 3:15 p.m. for a vehicle fire outside one of the business’ warehouses.

Flames spread to three RVs and four other vehicles before units were able to put it out. Images posted to social media showed smoldering vans, trucks and trailers in a lot:

One person was transported with burn injuries by medevac helicopter. A firefighter who also received burns was taken to a hospital.

Route 144 was closed for over three hours Saturday as firefighters responded to the blaze. 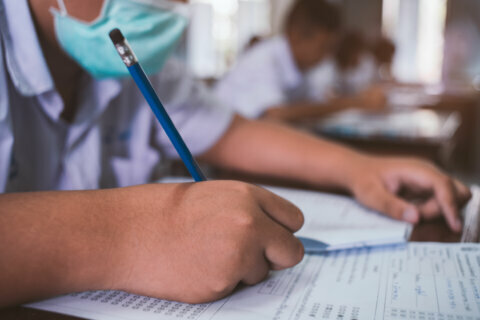