Home » Fourth of July » Cowboys for Trump to…

Cowboys for Trump to ride in July 4 parade; bring $895 hat for Trump

A New Mexico-based group called Cowboys for Trump is in D.C. to show the president support on July 4 — and they come bearing an $895 hat custom-made for Donald Trump. See photos.
(1/6) 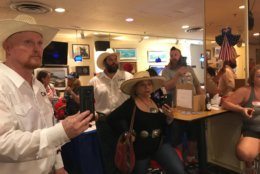 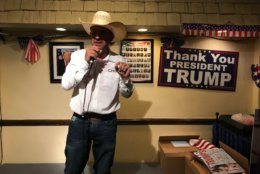 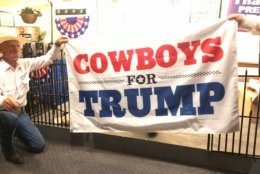 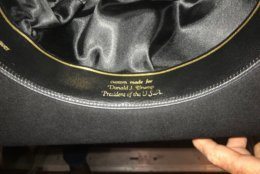 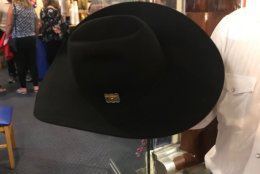 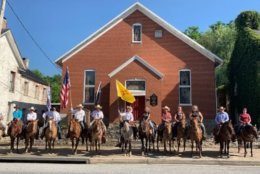 A New Mexico-based group called Cowboys for Trump is in D.C. to show the president support on July 4.

“We’ve got about half of us come from New Mexico, the other half are patriots from out here. We’re going to be flying our American flag, our state flag, and we’re going to be riding in support of our president and it’s going to be amazing,” Griffin told WTOP.

After creating a GoFundMe for their cause, the group came to D.C. to show support for the president in February — and managed to catch his eye. Nine days after their visit, Trump called Griffin and the two spoke on the phone for 30 minutes, Griffin said.

“It’s been God opening doors like I’ve never seen God open before and the beauty of it is it’s allowed me to bring representation back to my county,” Griffin said.

Ramie Harper, one of the Cowboys for Trump and owner of Harper Hat Company, made a custom cowboy hat for President Donald Trump but the group has been unable to reach the president to give it to him.

“If we get the hat to the president this time around, it’s going to be such an honor. If we don’t — we didn’t come here to bring the president a hat per se, we came here to support the common people of New Mexico, so it’s a win-win either way,” Griffin said.

Harper makes about 75 cowboy hats a year. The hat he made for Trump would retail for about $895, Harper told WTOP. The hat is made of felt, has a gold buckle with a diamond, a ruby and a sapphire, and Trump’s name on the inside.

“In my country, you have to earn your spurs. You have to earn the right to be called a cowboy,” Harper said. “We don’t let just anybody saddle up and step on one of our horses. I feel like Donald Trump, our president, is a cowboy at heart.”