With thousands of people heading to the District for the Fourth of July, here's a handy list to avoid any transportation headaches this Independence Day.
Listen now to WTOP News WTOP.com | Alexa | Google Home | WTOP App | 103.5 FM

WASHINGTON — Independence Day is one of the busiest times of the year with lots of tourists flocking to the nation’s capitol.

There was certainly no shortage of things to do this year.

Of course, to do any of those things, you need to know how to get around. Here’s a handy list on how to get in and around the District.

If you live here, you already know that driving around the District can be tough on the best of days. Add a few more thousand people to the roadways, it will get even harder though not impossible.

The first thing you’ll want to do is make sure you’re listening to WTOP’s traffic experts to get the latest traffic reports.

The other thing you need to keep in mind is that there will be a whole bunch of road closures and parking restrictions. 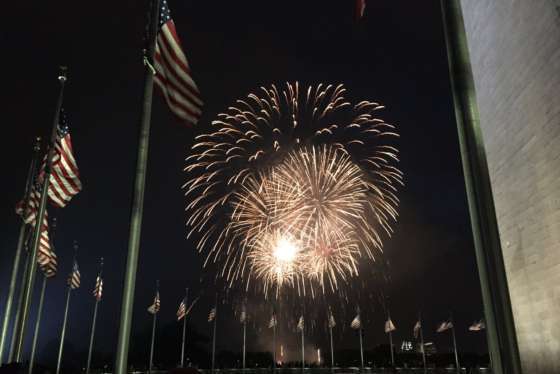 The U.S. Park Service strongly recommends you use public transportation to get to the National Mall, the Capitol and the George Washington Memorial Parkway.

Here’s what you can expect if you go that route:

Trains will start running at 7 a.m. and will close at midnight.

Trains will run every 12 minutes on each line until about 6 p.m. when they will gradually ramp up to near rush-hour level service. Due to large crowds, bikes and large coolers won’t be allowed on trains. There will not be any track work.

Beginning at 6 p.m. the Yellow Line will operate between Huntington and Mt. Vernon Square only. Passengers traveling to and from stations north of Mt. Vernon Square will need to connect to a Green Line train to complete their trip.

You can use Metro’s trip planner for more specific information.

If you’re planning on heading to the National Mall, the Park Service and Metro suggests you might want to avoid the Smithsonian station since it can get overcrowded during larger events.

They recommend using other nearby Metro stations such as Federal Triangle, Foggy Bottom, L’Enfant Plaza, Archives/Navy Memorial or Metro Center.

If you want to drive to a Metro station, parking will be free at Metro-operated facilities.

Metrobus will run on a Saturday schedule with off-peak fares in effect all day. Expect detours around the National Mall.

Unlike in years past, Virginia Railway Express will NOT be running Firecracker trains this year. VRE cites low ridership in previous years and that Independence Day falls on a Tuesday.

VRE says it will look to operate Firecracker Trains again when Independence Day falls on a Friday, Saturday or Sunday, which won’t be until 2020.

MARC will operate on a Saturday schedule for the Penn Line only. It will offer no service on the Brunswick or Camden Lines.

If a route isn’t listed, it doesn’t operate on Saturdays and won’t be running on July 4.

Montgomery County Ride On will operate on a Saturday schedule.

Alexandria DASH will operate on a Sunday schedule.

There will be no service for TheBus on July 4.

There will be no bus service in Loudoun County on July 4.

PRTC buses will not operate on July 4.

MTA commuter bus will run, except for Commuter Bus #201, which will operate on a Weekend/Holiday schedule.

In Baltimore, local MTA buses, Metro Subway and Light Rail will operate on a Sunday/Holiday schedule.

There are several taxi companies in and around D.C. available for hire. Rates may vary. If you’re looking to book a taxi you can use the app released from the D.C. Department of For-Hire Vehicles.

Lyft will team up with the Washington Regional Alcohol Program to offer a free ride home for up to $15 for the first 1,500 passengers who use the promo code SOBERJULY4 in the D.C. coverage area between 7 p.m. on Tuesday and 4 a.m. on Wednesday, July 5.

Passengers must be 21 or older to use this service.

If you’re planning on using Uber, beware that fares increase automatically when there’s high demand and in some cases can more than double.

The Park Service will have bicycle parking inside the secure zone near the Washington Monument just off Independence Avenue SW and 14th Street. Capital Bikeshare also has several docking stations in and around the National Mall.