From old mall to trendy food hall: Ballston gets a restaurant refresh

At Quarter Market in the newly redeveloped Ballston Quarter, the classic mall fare of the 1980s and ‘90s is gone. And its replacement is a microcosm of some of the D.C. area’s best chefs and restaurants.
Listen now to WTOP News WTOP.com | Alexa | Google Home | WTOP App | 103.5 FM

The food court inside the three-story shopping center that sits on the corner of Glebe Road and Wilson Boulevard in the Ballston neighborhood of Arlington, Virginia, is not your typical mall food court. For starters, you won’t find soft pretzels coated in salt and butter.

Giant cinnamon rolls and greasy fast-food burgers are also missing from the menu.

At Quarter Market in the newly redeveloped Ballston Quarter, the classic mall fare of the 1980s and ‘90s is gone. And its replacement is a microcosm of some of the D.C. area’s best chefs and restaurants.

After a two-year, multimillion-dollar overhaul, the renovated Ballston Quarter project (formerly Ballston Common) is nearly complete, and one of its biggest draws is its new food hall, Quarter Market.

The 25,000-square-foot space, which opens to an outdoor amphitheater, includes 14 stalls from many familiar local businesses, including Ice Cream Jubilee and Sloppy Mama’s BBQ. James Beard Award nominee Kevin Tien (of D.C.’s Himitsu) is also there with his new hot chicken concept, Hot Lola’s, and the team behind Timber Pizza Co. is firing up New York-style slices in the wood oven of its new outpost Turu’s. 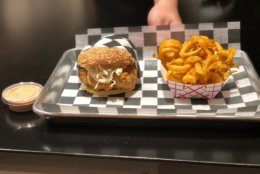 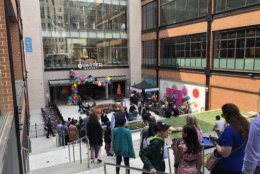 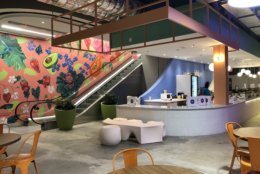 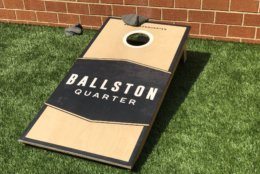 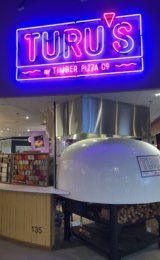 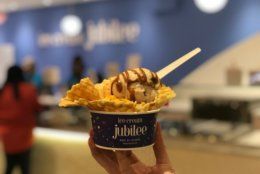 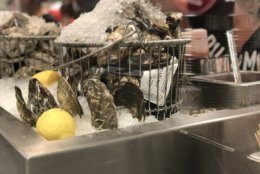 “It’s like when all of your friends decide to go on spring break together. A bunch of folks I knew kind of well, a bunch of people I was looking forward to getting to know,” said Ice Cream Jubilee founder Victoria Lei.

“We’re all now spending a lot of time here together, getting to know each other, sharing food, testing food, tasting food, and it’s a lot of fun.”

Baltimore favorite Local Oyster just opened with its raw bar and seafood-centric menu. And the creators of D.C.’s Bun’d Up are making Korean rice bowls at the market’s Rice Crook.

Full-service restaurants True Foods Kitchen and Ted’s Bulletin are also slated to open in the next few weeks, as are more fast-casual options, including Compass Coffee and South Block.

If it sounds like the newly renovated mall is more focused on eating than shopping, you’re not wrong. Forty percent of the 850,000-square-foot Ballston Quarter accounts for experiential offerings, including food and entertainment. A cooking school, live-action adventure course, and a bowling alley/arcade are also new tenants at the Arlington complex.

“There’s no question that the world is changing. What people are really looking for today is different than what was important 15, 20 years ago — even maybe five or 10 years ago,” said Will Voegele, senior vice president of the project’s developer, Brookfield Properties Development.

“And without question, this is more than ever the experience economy.”

Even still, those who want to spend their money on something more material will find the mall’s former anchor store, Macy’s, along with new retailers Potomac River Running and Steadfast Supply. Onelife Fitness (formerly Sport & Health) and Regal Cinemas also stayed through the renovations.

And while Ballston Quarter and Quarter Market are now officially open to the public, not everything at the newly revamped mall is open for business. However, Voegele predicts the majority of the development’s food concepts will be up and running by early summer.

“We have people coming online almost weekly,” he said.