Taking a bite out of history: A special menu at José Andrés’ America Eats Tavern channels the food heroes of the early modern world, thanks to a collaboration with the Folger Shakespeare Library.

Potato pudding, braised short ribs and chocolate cake are not out of place on the menu at José Andrés’ America Eats Tavern, where barbecue, hush puppies and mac and cheese reign supreme.

But they are unlike the rest, and that’s because the recipes for these dishes can be traced back to manuscripts from the 17th and 18th centuries, housed at the Folger Shakespeare Library.

“Early modern handwriting is not super easy to read, so we wanted to give the general public a chance to engage with all of those recipes and learn from them,” said Amanda Herbert, associate director for fellowships at the Folger Institute at the Folger Shakespeare Library.

“It makes the history of the period instantly accessible and it brings a lot of relevance to the past.”

The collaboration between America Eats Tavern and the library coincides with Folger’s “First Chefs: Fame and Foodways from Britain to the Americas” exhibition, which runs through March 31.

Herbert, a co-curator of the exhibit, said Folger has always had an interest in food; it’s home to the world’s largest collection of early modern English 17th-century manuscript cookbooks — “which is pretty amazing,” she said.

With a grant from The Andrew W. Mellon Foundation, the Folger Institute transcribed and adapted a number of these recipes, and is now using them to tell the stories of “the named and unnamed food heroes of the early modern world.”

“And to bring attention to the fact that it takes a lot of people to get food from the farm to the table, and a lot of those people go unrecognized. They went unrecognized in the past, and they go unrecognized today,” Herbert said.

The exhibit features few celebrity chefs. Rather, it highlights a plant-obsessed pirate who brought cacao and chocolate to the British public, and a choirboy who taught himself how to farm.

Robert May, a French-trained chef who wrote the first cookbook for culinary professionals, and Hannah Woolley, the first woman to publish a cookbook, are also featured — and so is Hercules, the enslaved chef of George and Martha Washington.

“He was an incredibly gifted culinarian, but he lived an unfree life. And he chose to flee from his fame in order to achieve freedom,” said Herbert, who worked with James Beard Award-winning author and food activist Michael Twitty on a recipe adaptation of Hercules’ akara.

America Eats Tavern executive chef Claudio Foschi said when Andrés found out about the exhibition at the Folger Shakespeare Library and the potential for a food collaboration, he jumped at the opportunity.

“He likes to tell stories in all his restaurants,” said Foschi, who toured the exhibition with Andrés and sketched out the best ways to present the historic recipes to the modern diner.

“A recipe like this is really exciting for us because when you look at the ingredients, they are ingredients that we’re still using in our own kitchen,” Foschi said about May’s brisket.

America Eats Tavern is also offering a special rum punch, which is a riff on an 18th-century recipe, housed at Folger Shakespeare Library.

The “First Chefs” menu is available at America Eats through the end of March, but Herbert said food will always be a vehicle to better understand history.

“I think it gives people an instant access point into the past,” she said.

“Food is universal. Everyone has to eat; everyone needs to put food in their bellies, and they want to feed and bring joy to the people around them and the people they love. And the same was true of early modern people. They worked really hard for the same things we do.” 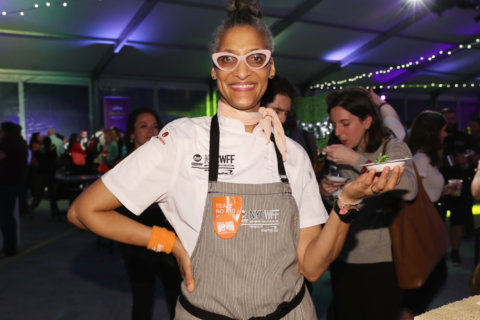 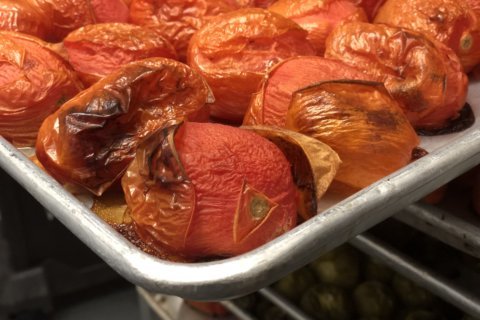