Coronavirus News: Fairfax Co. votes to increase substitute teacher pay | Is it time to get a COVID-19 booster? Which one? | Local cases of COVID-19 | How many in DC region are vaccinated?
Home » Food & Restaurant News » DC's 'Top Chef' supersizes…

DC’s ‘Top Chef’ supersizes it in Tysons: A preview of Isabella Eatery

The 41,000-square-foot food hall, which opens soon at Tysons Galleria, is the largest project that the former “Top Chef” standout has ever taken on. Here's what's on the menu.
Listen now to WTOP News WTOP.com | Alexa | Google Home | WTOP App | 103.5 FM
(1/7) 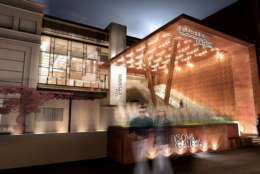 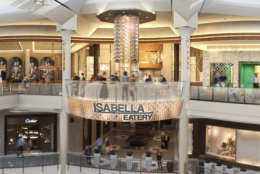 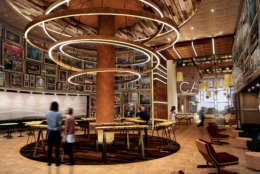 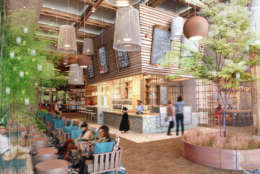 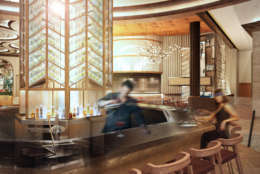 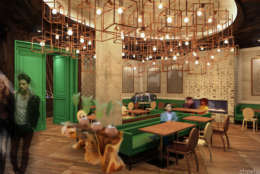 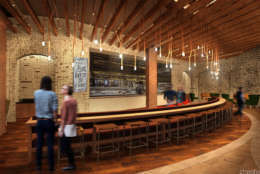 WASHINGTON — Mike Isabella has been starved for sleep lately.

Blame everything that’s on his plate.

These sizable projects themselves are something of an appetizer for MIC’s main course: Isabella Eatery, a massive 41,000-square-foot, 600-seat food hall that opens soon at Tysons Galleria.

“It’s something that hasn’t been done before on this level,” Isabella said.

Indeed, it’s the largest project the former “Top Chef” standout has ever taken on. Isabella Eatery comprises six of the celebrity chef’s existing concepts and three new ones.

‘More of an experience’

Isabella Eatery plays with the food hall concept, drawing inspiration from Italian and Spanish markets, as well as from Moroccan bazaars. And unlike the Eataly chain, which combines a restaurant with a market, Isabella Eatery focuses on the former.

Its ambition extends beyond the menu, too: It aims to tweak the food hall experience itself, offering the flexibility of formal, casual and take-out options.

“You can come here seven days in a row and get a different meal,” he said. “It’s going to be more of an experience than just coming out to eat. You can come and hang out.”

Originally, Isabella’s share of the project was smaller. The mall’s developer had offered a couple of spaces for the food hall, he said, but as he thought it over, it made more sense to make a play for everything.

After all, he’s a guy who likes to go big.

“I have three restaurants in one building — with Yona, Pepita, Kapnos Taverna — and in D.C., I have Kapnos attached to G sandwich shop,” Isabella said. “So technically in two buildings I have five restaurants.

Going this big has its advantages. Buying power is one example. Another is the cross-utilization among concepts.

“With a commissary kitchen, you can cook a lot of the base sauces and the vinaigrettes and the chickens and the porks and everything in the same kitchen,” he said.

A downside of going this big? Letting go. One chef can only feed so many — especially if he’s managing an empire.

“I mean we have all these restaurants and now this … I mean, it’s a lot,” he said.

“I have a great team around me. I have a lot of experienced guys — a lot of guys who’ve been with me for years, a lot of new guys who come from really big properties and corporations,” he said.

It’s all a far cry from the days when Isabella was making meatballs with his grandmother. What would she think of something this massive?

“I don’t know if she’d understand it, but I think she’d be happy,” he said. “My family is definitely excited for it. It’s something unique and special.”