The perfect recipe to clean up the planet? Eat less meat

Did you know that cattle-rearing generates more greenhouse gas emissions than transportation? If you're looking for a way to clean up the environment for Earth Day, experts say going meat-free every now and then can have a big impact. Here are some tips and recipes.
Listen now to WTOP News WTOP.com | Alexa | Google Home | WTOP App | 103.5 FM
download audio
November 29, 2021 | Cars vs. cows: Fighting greenhouse gases can start on the dinner plate (WTOP's Rachel Nania)

WASHINGTON — Cleaning up the environment could be as easy as swapping your lunchtime burger for the occasional bowl of salad.

According to the USDA, Americans consume more meat than the national dietary recommendations, and the country’s appetite for it comes with some serious environmental consequences.

Cattle-rearing generates more greenhouse gas emissions than transportation, the United Nations reports. And livestock, which uses 30 percent of the earth’s land surface, is a major contributor to land and water degradation.

That is why experts say scaling back the amount of meat you eat, even the slightest bit, can have a big impact on the health of the environment.

“If we all took a day or two break from eating meat during a seven-day week, we would remove what would be the impact of 7 million cars from the road,” said Todd Gray, executive chef and co-owner of D.C. restaurant Equinox.

“I don’t think we understand the impact that we can have, environmentally speaking, by taming our diet down.”

Recent movements such as Mark Bittman’s Vegan Before Six, Graham Hill’s Weekday Vegetarian and the Meatless Monday campaign have pushed the “less meat” lifestyle into the mainstream.

Between 2005 and 2014, Americans cut their beef consumption by 19 percent, The New York Times reports. But this doesn’t mean they bid farewell forever to their beloved filets.

“We sometimes think about meat consumption as though you’re either a vegan or you’re an omnivore, but there’s a whole choice of decisions that happen in between those identities,” said Brian Kateman, president of The Reducetarian Foundation and editor of “The Reducetarian Solution.”

“More and more people are choosing to cut back on the amount of animal products that they consume and eat more fruits and vegetables and whole grains, and I think that’s in part because of different reasons.”

In addition to environmental concerns, some of these reasons include health and wealth.

In 2015, the World Health Organization issued a warning that processed meats, such as bacon, hot dogs and deli meat, could raise one’s risk of cancer. And research suggests diets packed with fruits, vegetables and whole grains reduce risks for heart disease, stroke, diabetes and obesity.

Cutting back on meat also helps to cut costs.

“It’s no secret that meat tends to be relatively expensive, particularly if you’re getting meat that’s high-quality and delicious, and so we’re seeing people who are interested in just saving money,” Kateman said.

Research published in the Journal of Hunger and Environmental Nutrition found that vegetarians saved $750 more a year than their meat-eating counterparts.

Gray, whose restaurant serves plenty of meat and fish options, but also offers a plant-based menu and a Sunday vegan brunch, says reducing your meat intake doesn’t mean you have to give up your favorite foods. Rather, it’s a mindshift — a change in the way one views protein on the plate.

“What if we took a plate of pasta and we maybe laced or garnished it with meat, and it wasn’t so much where the meat was the center of the plate,” he said.

Instead of cooking a large steak and serving it alongside a small salad, make the base of the meal vegetables and lay strips of grilled steak on top, Gray added. For lunch-on-the-go, pack a tomato and mozzarella sandwich on a fresh baguette, and for a flavorful and hearty dinner, try eggplant Parmesan.

For those less inclined to cook, the food industry is making it easier than ever to transition into meat-free meals with better-tasting options for meat-alternative products. Hampton Creek’s plant-based mayonnaise and cookies are winning over taste buds nationwide, and companies such as Beyond Meat and Impossible Foods are making plant-based burgers that are designed to look, smell and even bleed like ground beef.

For that reason, the burgers appeal to very few vegetarians. Rather, they’re targeted toward omnivores looking to dial back their meat intake.

“We don’t have to start going from barbecuing burgers that you love so much to becoming a vegan,” Gray said. “One day, or several lunches a week, find some alternatives to eating meat a couple days a week and the impact it will have on our environment will make this even a better place to be for generations to come.”

Kateman’s advice? Don’t get bogged down with labels. Eat what you like, but just make a conscious decision to occasionally eat less of it.

“The average person eats 275 pounds of meat a year, so even reducing that by 10 percent can have a big impact,” he said.

“The hope is that if we all work together, if we all do our part in eating more fruits and vegetables and whole grains and other plant-based foods, we’re going to actually be successful in reducing societal consumption of animal products, and that’s going to make a huge difference for issues we care deeply about, like our health and climate change.”

Puree pistachios in a food processor. Add lentils, garlic, seasoning and lemon juice. Puree until smooth, adding water as necessary to create a creamy consistency. Transfer to a bowl and garnish with toasted chopped pistachios. Drizzle with good olive oil and dust with smoked paprika. Serve with veggies or chips of choice. Serves four to six people.

Combine all ingredients in a high-speed blender and puree until liquefied. Pass through a small-holed china cap or pasta basket in order to keep tomato consistency. Adjust seasoning and keep chilled until ready to use. 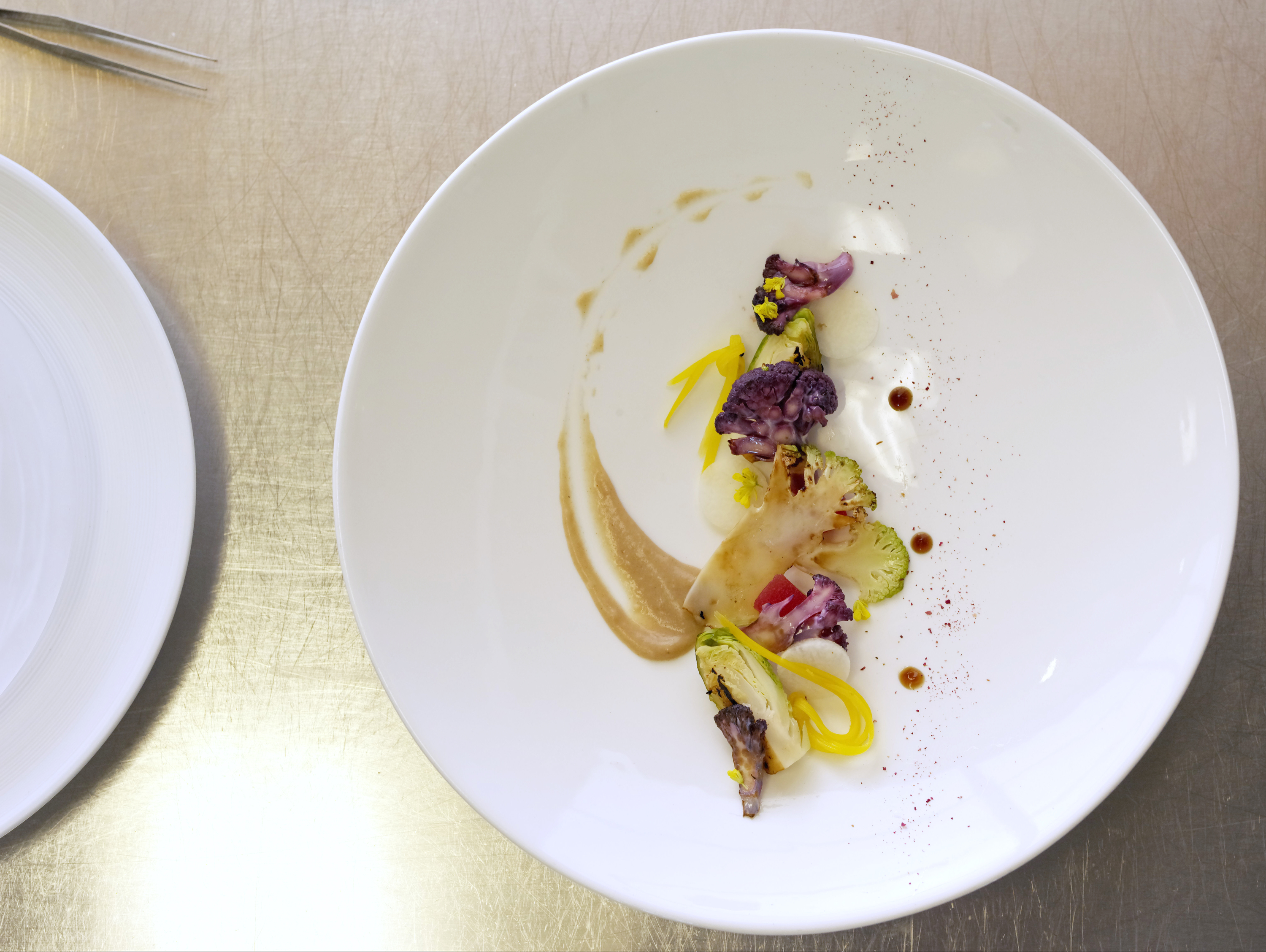