All too often people associate vegetables with microwaved broccoli and canned green beans. But some of the country's best chefs are out to change that perception. (Recipe)
Listen now to WTOP News WTOP.com | Alexa | Google Home | WTOP App | 103.5 FM

WASHINGTON — When guests walk into Vedge, one of Philadelphia’s most acclaimed restaurants, they are welcomed by an impressive wine list, an innovative cocktail program and an elegant food menu.

But sometimes chef and owner Richard Landau thinks diners need to be greeted by a psychologist as well.

“Some people are so scarred by their childhood memories of vegetables, that they just won’t open their minds to try something new,” says Landau, a 2015 James Beard finalist for Best Chef Mid-Atlantic.

He says all too often people associate vegetables with microwaved broccoli and canned green beans.

Landau sees it as his job to change those perceptions.

In 2011, he opened Vedge, a vegetable-focused fine dining restaurant, with his wife and partner Kate Jacoby. The menu features comforting snacks such as rutabaga fondue with soft pretzels and pickles, and fresh takes on refined classics like portabella carpaccio and cauliflower socca.

“Basically we’re giving the same treatment to vegetables that’s traditionally only done for meat,” he says, mentioning the use of time-honored techniques, such as spicing, curing, smoking, pickling and roasting.

To put it plainly, Vedge is a vegan restaurant. Nothing on the menu is augmented with cream, butter or eggs, and Landau doesn’t pepper any dish — or cocktail — with bacon fat.

“We don’t cheat by using risotto or pasta,” he adds. “We’re just making great dishes out of purely vegetables.”

But meat-eaters and vegetarians, alike, are flocking to the Center City restaurant for a bite of his beets — even in a food-obsessed town known for its cream-filled Italian pastries, piled-high hoagies and yes, cheesesteaks.

Landau isn’t the only chef experiencing success with a plant-based menu.

The key to making lettuce luxury, Landau says, is the preparation. And it takes time.

In an interview with Philadelphia Magazine, Landau says everything on the menu goes through a three or four-step process.

“It has always amazed that people could put so much effort into preparing animal proteins, and yet when it comes to a two-step process for vegetables, it seems such a burden,” he says. “Any food that’s prepared well and seasoned perfectly … can just get across to anybody.”

And that’s often what he finds among his customers — even the most skeptical.

“It’s a well-prepared dish that satisfies people. They are loving these dishes because they’re not missing anything with them.”

On Saturday, Oct. 3, Landau and Jacoby will be in D.C. for the annual DC VegFest, where they will demo their favorite dishes. They will also offer some pointers on how you can elevate vegetables in your kitchen and incorporate more plant-based meals into your family’s diet. (The couple says their family loves taco night and veggie-rich Asian noodle soups.)

“You’ve got to find certain things that [the kids] enjoy,” Jacoby says, admitting that it’s not always easy to steer the little ones away from pizza and macaroni and cheese. “It’s all about the culture of eating.”

In their spare time, you might catch the couple scoping out some real estate around town. Jacoby, a Georgetown University graduate, says she and Landau are interested in opening a restaurant in D.C.

“We’re not sure when that will come together, but we thought [DC VegFest] would be a great opportunity to reach out to the vegetarian community down there,” she says.

Landau says the event also gives them a platform to introduce vegetables in a whole new way.

Where: Yards Park, the intersection of N Street SE and First Street SE (one block from the Navy Yard Metro station)

Make the glaze by whisking together the gochujang, tamari, vinegar and sugar in a large bowl.

In another large bowl, toss the eggplants in the sesame oil.

Heat a large sauté pan over high heat. It is important to get a nice sear on the eggplant, so start by arranging the strips in a thin layer across the bottom of the pan and letting them get crisp, about five minutes. You may need to do this in two or more batches depending on how large your pan is. Transfer the eggplant slices to the bowl of glaze as they are done.

Toss the crispy eggplant in the glaze, then transfer to a sheet pan. Roast until the glaze bakes onto the eggplant, being careful it doesn’t burn, five to seven minutes.

Meanwhile, fold the kimchi into the vegan mayo in a small bowl.

Warm the tortillas in the oven, directly on the rack, for about two minutes.

Assemble the tacos by spreading about 1 tablespoon of the kimchi mayo down the center of each tortilla. Top with a large spoonful of the roasted eggplant, dress with the cilantro and scallions, then serve.

Recipe from Vedge: 100 Plates Large and Small That Redefine Vegetable Cooking, copyright © Rich Landau and Kate Jacoby, 2013. Reprinted by permission of the publisher, The Experiment. Available wherever books are sold. 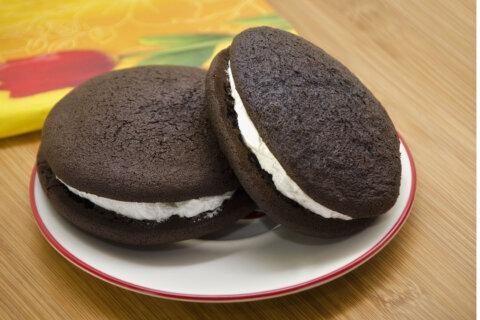