Out of eggs? Need a gallon of milk? Skip the grocery store. At a number of neighborhood markets throughout the city, owners are offering everything from pantry staples to sophisticated sandwiches, and even story time for the little ones.
Listen now to WTOP News WTOP.com | Alexa | Google Home | WTOP App | 103.5 FM
(1/5) 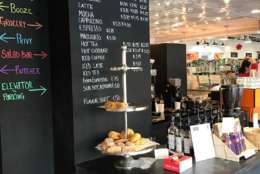 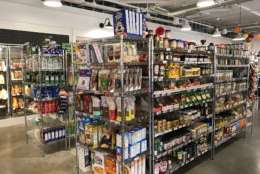 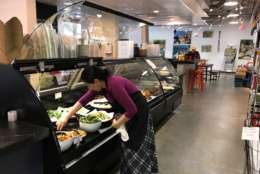 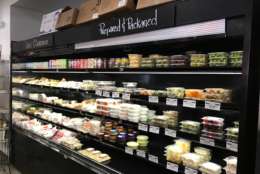 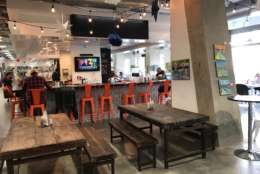 WASHINGTON — On a sunny weekday afternoon, the crowd at Broad Branch Market nearly triples in size once the final bell at the neighboring elementary school rings. Kids on scooters, accompanied by adults pushing younger siblings in strollers, take over the outdoor picnic tables and flood the store in D.C.’s Chevy Chase neighborhood.

But apparently, a spring-fever induced slushie run doesn’t hold a candle to Thursday nights in the summer. That’s when a popular children’s singer/songwriter gives free outdoor performances at the market.

“It builds something that is missing a lot from neighborhoods, especially in the Washington area where people don’t know each other that much and it’s so transient.,” said John Fielding, co-owner of Broad Branch Market and the newly opened Soapstone Market in D.C.’s Van Ness neighborhood.

“[The market] is somewhere you can just go and meet up with people without it being something formal.”

In the past decade, D.C. has experienced tremendous growth. Every day, there’s word of a new restaurant, a new apartment development or a newly revitalized shopping corridor. And while much of the change has modernized the city, some additions have instilled a sense of old-time charm. One such change is the neighborhood market.

” … It really became something more when we started seeing friendships created in our store.”

More stores like Broad Branch Market, now in its ninth year, have popped up across the city. In 2013, former lawyer and Capitol Hill staffer Danielle Vogel opened Glen’s Garden Market in Dupont Circle. Vogel’s focus on local products — plus cheaply priced draft beer and a robust selection of prepared foods — won over the grocery store-less neighborhood. A few years later, she expanded to a second location in D.C.’s Shaw district.

Cullen Gilchrist, CEO of D.C.’s Union Kitchen, had a similar idea when he opened Union Kitchen Grocery on a residential street in Capitol Hill.

“Our goal is to be within two-to-three blocks of where you live and for us to be the most convenient way for you to get the things you want,” Gilchrist said.

Similar to Glen’s Garden Market, Union Kitchen Grocery, which recently opened a second location in Shaw and has plans for more, features a wide selection of “Made in D.C.” products, many of which come straight from the businesses that operate out of the Union Kitchen co-working space.

However, next to the ‘Chups condiments and Gouter tonics, customers will also find Coca-Cola and Doritos.

“We want to make sure that we supply everything that someone would want,” said Gilchrist, adding that customers might be more likely to try a local product if they also have access to the conventional ones for which they came.

Bodegas have been city staples for decades, but Gilchrist said D.C.’s new breed of neighborhood food markets go one step beyond the typical corner store. Many sell made-to-order meals, coffee and prepared foods.

At Soapstone, customers who pop in for a gallon of milk on the way home can also sip on a glass of Virginia wine before rounding out their commutes. On Saturday mornings, there’s even a children’s story hour to pair with the freshly baked pastries.

“I think people are kind of used to a corner store being one thing and they’re used to a grocery store being another thing, and we want to make sure that we can be, to some degree, a little bit of both for everybody,” Gilchrist said about Union Kitchen Grocery.

Thirty years ago, Scott Nash opened a small alternative food store, long before the days of Union Kitchen Grocery and its fellow neighborhood markets. At the time, organic food was missing from conventional grocery stores, and Nash’s answer to its growing demand was MOM’s Organic Market, which he founded in 1987.

He says one reason for the uptick in smaller, community-based stores is consumer demand.

“People have gotten a lot more aware about their food … and I think that’s being represented now, on the grocery side as well,” Nash said.

Broad Branch and Soapstone’s Fielding says the desire for causal connections is another explanation for the trend — whether it’s getting together for a morning coffee, meeting after school for a play date, or catching up with a neighbor while grabbing last-minute ingredients for dinner.

“We always knew the idea of having a community store — it’s got the word ‘community’ in it — but it really became something more when we started seeing friendships created in our store.”

Explore some of D.C.’s neighborhood markets: