In an era where craft cocktails and celebrity chefs dominate the D.C. dining scene, it’s hard to find a watering hole with Budweiser and a bartender who knows your name. But at one local establishment, that's exactly what's on the menu — at least for a few more weeks.
Listen now to WTOP News WTOP.com | Alexa | Google Home | WTOP App | 103.5 FM
download audio
August 10, 2022 | A beloved Ballston bar serves its last drinks (WTOP's Rachel Nania)

WASHINGTON — Wearing a plaid bucket hat and a short-sleeve button-up shirt, Mike Filipczyk leans over the bar and places a pint of light beer in front of Alberto Paredes.

Paredes, 46, whips out his phone, scrolls through photos and launches into a series of stories about the newest four-legged member of his family.

In an era where craft cocktails, celebrity chefs and “artisanal” everything dominate the D.C. dining scene, it’s hard to find a watering hole where comfort comes in the form of a bottle of Bud, a basket of onion rings and a bartender who knows your name. But at Carpool in Arlington, Virginia, that is exactly what’s on the menu — at least for a few more weeks.

Carpool, which opened in 1995, is one of the few remaining establishments of a bygone Ballston. The one-story sports bar, stocked with pool tables, sports paraphernalia and antique gas station signs, was once a focal point on the busy stretch of Fairfax Drive that runs between the Ballston and Virginia Square Metro stations.

Now, offices and apartments tower above it. Soon, new construction will replace it.

In 2014, development company Penzance bought the bar’s adjacent building with the option to acquire the Carpool property. In 2016, the sale was completed and plans to replace the bar with a 22-story, 330-unit apartment building, retail space and underground parking were announced. Carpool is expected to serve its last drinks in April, The Washington Business Journal reports.

Filipczyk, who has worked as a bartender at Carpool for more than 21 years, says the neighborhood has changed “drastically” since he arrived on the job.

“It’s high-rise after high-rise,” said 59-year-old Filipczyk, who added that there’s also been an influx of bars and restaurants. “The neighborhood has shifted a lot.”

The change, however, has not deterred customers from visiting Carpool. If anything, it’s kept them coming back.

“To me, it’s kind of like high school homeroom. Everybody knows everyone,” said Paredes, a general contractor who grew up three blocks away from the bar and has been a regular since it opened.

When Paredes moved back to the area after spending eight years in south Florida, Carpool felt less like homeroom and more like home.

“I found that the more things change, the more they stay the same,” he said referring to the high-rises that moved in and the friends that moved away while he was gone. “But Carpool is always Carpool. It’s just one of the most comfortable bars I’ve ever been to in my life.”

It’s no secret that Filipczyk is one of the reasons the bar is so beloved. General manager Jorge Carcamo says he would lose at least 10 percent of his business if he ever fired Filipczyk.

This summer, a handful of the bar’s regulars got together and purchased a guitar for Filipczyk’s impending retirement. Carcamo estimates the instrument cost $5,000.

“Everybody loves Mike. People follow him wherever he goes,” Carcamo said.

Curt McSweeny is one of those people. The former Californian moved to Arlington two years ago and quickly found familiarity, thanks to a warm welcome from Filipczyk. Their relationship has morphed beyond the bar: The two became friends and even catch concerts together at Wolftrap.

McSweeny says he pops into the bar two or three times a week for about an hour. He comes for the conversation; the beer is just a bonus.

“It really is just to see these guys. I can have beer anywhere, but I really enjoy their company … so I choose to walk a block and a half and pay for it,” McSweeny said.

Filipczyk has been in the hospitality industry for decades. Before pouring drinks at Carpool, he owned a semi-fine-dining restaurant in Woodbridge, Virginia, which he eventually sold to his partners.

“Then I came up here, I took off my suit and my tie, put on jeans and a T-shirt and tripled my income,” Filipczyk said, referring to Carpool’s packed happy hours in its first few years of business.

“I would come at 5 o’clock and by 5:30, it’d be four-deep at the bar Thursday and Friday. There weren’t as many [bars and restaurants] then,” he said.

Despite the changes that have taken place around town, Carpool has remained true to its identity. Several TVs air different sports games above the bar, which is lined with stacks of clean glasses and ketchup bottles. The food isn’t fancy. Paredes says, if he’s being honest, it isn’t even very good.

But that’s not why the neighborhood’s residents and nearby employees flood the bar as soon as they punch out from their professional lives.

“It’s just the camaraderie … and the group of people that hang out here are just really quality people. You have everyone from lawyers to bankers, I’m a general contractor, and we all get along. It’s just a great time,” Paredes said.

Carpool’s owners have a second location in Herndon, Virginia, and plan to relocate the Arlington bar to a 7,839-square-foot space in Fairfax County’s Fair Lakes area this summer.

Filipczyk says the owners are also scouting out a few more options for additional outposts. And while no new bar will replace the original, visitors will likely see a familiar face or two when they belly up to the bar and order a beer.

“I’d like to tell you I’m ready to retire. I’m only 59 and a half, so I’ve still got a few more years to work,” Filipczyk said. 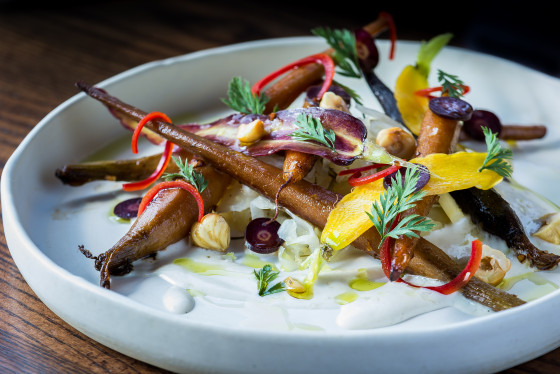 Most buzzed about restaurant openings of 2016